An American seeking to understand the soul of Ukraine talks with Slava Vakarchuk, Ukraine’s rocker-politician-philosopher.

On August 23, the eve of the 30th anniversary of Ukraine’s independence from the Soviet Union, I walked past the Lviv Opera House. Under gentle rain, hundreds were gathered on the vast promenade while the choir began the celebration with the wild and haunting, even scary, «O Fortuna» from Carl Orff’s Carmina Burana.

A strange song about fate for a joyous independence day–strange unless you know the drama not only of 70 years of Soviet occupation but also, in independence, 30 years of revolutions and Russian occupation.

I saw among those singing and listening the unfolding and exciting drama of democracy: free and joyful people, despite everything. I watched some of the many new Saudi tourists, who live in a country that is not as free, clamoring to record this moment. And I thought: What is it that makes freedom? What defines a free country?

Years ago, I thought I knew what freedom was. At university I believed in the utter righteousness of our post 9/11 wars, including the one that ended last week in ignominy. And so I went to work for the people in Washington who started the wars «to spread freedom.» Soon America’s most powerful media oligarch, Fox News’s Roger Ailes, had selected me as his protégé.

We thought we were protecting freedom, but we were so scared of everything. Realizing living in fear was not living freely, I fled and traveled America and the world, first to escape the corporate henchmen following me, who did not want me to be free, then to listen and learn about better ways to live.

Now, these travels have brought me to a pandemic-exile in Ukraine. I have seen a free spirit here. People know how to survive. Many have family in a village who grow produce or raise animals, so there is little possibility of starving, whether in a corona or zombie apocalypse. People know how to make and fix things. Unlike in France, Israel, Australia, UK, the government has not even attempted to lock Ukrainians in their houses in the pandemic.

Prof. Jose Casanova of Georgetown University told me in 2020 that Ukraine’s civil society is akin to what French political theorist Alexis de Tocqueville observed as the strength of America in the 19th century: people who live and collaborate together, locally, as neighbors and family and form associations--something fully on display during the Euromaidan revolution--can govern themselves without authoritarianism.

Here indeed it is hard to be isolated. Communities are strong. In western Ukraine, the greek catholic ethos, the holiday rituals, the relationship of kum that binds parents and godparents: these institutions keep people connected, a far cry from the «loneliness pandemic» in the USA.

These things are hard to define, but when I ask the growing number of American expats who seem to be coming here to visit or work why they come to Ukraine, without exception they say «freedom.»

The American writer Walker Percy wrote that each great city has a genie-soul: some clear definable spirit. How do we describe a country’s genie-soul? What is a nation? 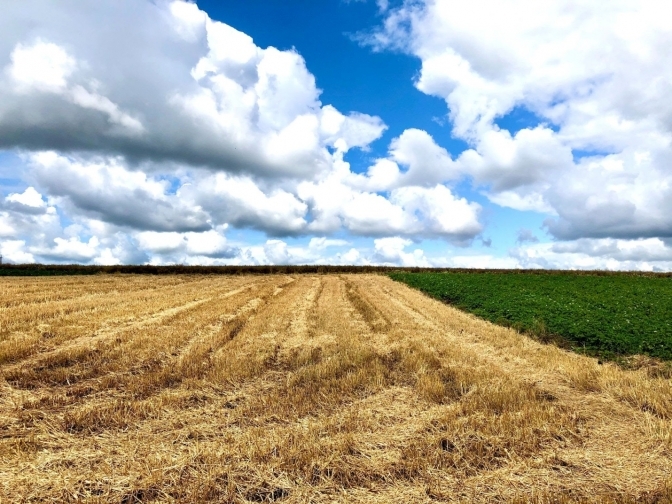 A field northeast of Lviv. Photo by Joe Lindsley.

I’ve examined what freedom means with great mentors, theorists and practitioners: the late Argentine-American democratic theorist Guillermo O’Donnell who studied and stood up to authoritarians; the Irish-American philosopher Alasdair MacIntyre, who thinks small communities are essential to a good, virtuous, and free life--and that media is a dumbing opiate that keeps people ufree; and the late Oldrich Cerny, a leader with Vaclav Havel of the Czech Velvet Revolution against Communist oppression.

Now here in Ukraine, in this people-driven experiment in democracy, I have sought to create a clear definition of the freedom I see. It’s not just fortuna, or fate. I think it is something real and worked-for, most especially in that 2014 Revolution of Dignity.

In June 2021, I spoke with someone whom I thought could help me understand Ukrainian freedom: Sviatoslav «Slava» Ivanovych Vakarchuk. His band Okean Elzy, founded in 1994, has packed stadiums of tens of thousands singing in the Ukrainian language. His song «Na Hebi» is so often heard on the streets of Lviv, often with dozens of people singing along.

As a musician, he has become one of the chief chroniclers of Ukraine’s life and heritage. He also served twice in the Ukrainian parliament and his name was in early contention in the last presidential race. And he’s also a physicist who has explored the outer edges of knowledge: He received his PhD in physics, focusing on supersymmetry, from Lviv University.

I was keen to talk with him because as a songwriting politician rockstar he has both narrated and worked to define the meaning of Ukrainian democracy.

Physicists seek to uncover mysteries by connecting things that seem quite implausible. I wanted to know from Slava Vakarchuk, the physicist, in his time as a chronicler of Ukraine and as a politician seeking to steer Ukraine, whether he is discovering or realizing or seeking some grand unified theory of Ukraine. What is Ukrainian freedom?

«If I knew the answer I probably would be making this the most successful country in the world,» Vakarchuk said. «We all need to try day by day. No one knows what the exact result will be. If you try hard to be your best, if you do this from the bottom of your heart, suddenly one day you, well, we don’t know what the result will be, we don’t know what the country will be like in 30 years... the best we can do is be honest in what we do and do everything with love.»

In my old Fox News way of thinking, I would have appreciated a clearer, simpler answer: Ukraine is about x, y, and z values.

But hearing Vakarchuk, I thought of Alyosha’s Speech at the stone in Dostovesky’s Brothers Karamazov: a moment to pause, consider how we should live, and then resolve to do it.

After the short interview with Vakarchuk, I attended Okean Elzy’s June Opera House concert, with a forested stage evoking the Carpathians. I looked at the five floors of people and saw a culture, after decades of occupation and even two years of a globally-restrictive pandemic, allowed to thrive. All were clapping in that Ukrainian style, not in random but in a unified beat.

While so many American cities have suffered violence and destruction these past years, here I see dancing in the streets. Maybe I see love. Maybe that is what the Revolution of Dignity made possible: recovering a sense of affection.

This for me is the beginning of this conversation: to understand how American and Ukrainian democracies, one tired and uneasy, the other young and uneasy, can learn from each other.

What is the point of our independence and politics? What does it mean to be free?