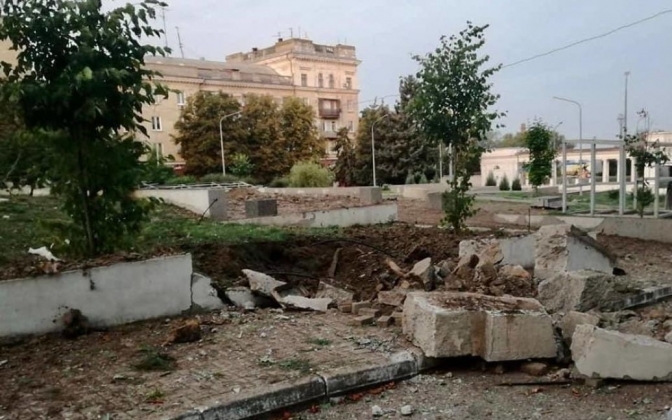 Over the past day, the Russians have carried out nine sorties of attack and army aircraft. Several reconnaissance groups of the enemy were neutralized, and assault actions in three directions at once did not succeed – the Ukrainian army forced them to withdraw. Shelling during the night – two missile strikes, one airstrike, eight artillery strikes, three mortars, three tanks.

In the morning, there was artillery shelling of Avdiyivka, there is already information about at least one injured person. At night, Maryinka, Soledar and Siversk were shelled. Avdiivka, Bakhmut, Kostiantynivka, Siversk and other settlements were shelled during the day from artillery, tanks, mortars, S-300 air defense systems, Hrad anti-aircraft missiles, and Uragan. Seven private residential buildings, the premises of Avdiivka Coke Plant, a railway track, 35 metal trade containers, a shopping center, a shop, and a repair shop were damaged. In one day, two were killed and six were wounded in the region.

In the region, the occupiers attacked the Izyum, Kharkiv, and Chuhuiv districts. Private homes, open areas, garages, and shops burned. During the day, the occupiers shelled the village of Tsyrkuny, Kharkiv district, virtually non-stop. Previously, there were no casualties.

During the night, the enemy shelled the Nikopol district twice, over 80 shells from «Hrad» on residential areas, as a result of which 11 people died and 13 were injured. The Russian army struck Marhanets and Myrivska communities. In Marhanets, more than 20 high-rise buildings, two schools, Center for the provision of administrative services, a dormitory, a palace of culture, a city council building and several other administrative buildings were damaged. In the city, the power line has been cut. Several thousand people are without electricity.

11 private houses and two gas furnaces were damaged in the village of Vyshcha Tarasivka. Up to a thousand people without gas.

A loud explosion was heard near Zaporizhzhia late yesterday evening. At 23:00 and at 24:00 the air defense of the Armed Forces shot down two enemy missiles. This morning, four more raids were recorded near Zaporizhzhia, the enemy targeted the village of Kushuhum, Zaporizhzhia district. Search and rescue operations are ongoing. More detailed information about the consequences and victims is currently being established.

At night, the enemy bombarded Mykolayiv with Smerch rocket launchers. According to preliminary information, three people were injured. Residential buildings were damaged as a result of shelling. There were also hits on the territory of the enterprise, warehouses and the depot. Detailed information is being clarified.

At night, the village Shevchenkove was also shelled again. There are no casualties. Damage information is being updated. In the afternoon of yesterday and tonight, populated areas of the Halytsyn community were shelled, as a result of which residential buildings were damaged and coniferous litter and forest plantations of the Halytsyn forest tract were ignited. There are no casualties.

In the Bashtan district yesterday approximately at 9:30 p.m., due to shelling outside the village. There was a widespread fire in the fields. There are no casualties. The settlements of the Berezneguvate community located on the demarcation line are under constant fire. Information on damage and victims is being clarified.

The Armed Forces continue to successfully hit enemy formations and Russian positions. In particular, an enemy warehouse was destroyed in the Heniche district of the Kherson region yesterday. Fighting continues in settlements bordering Mykolayiv and Dnipropetrovsk regions. In most communities, the situation remains tense, and more and more villages are on the verge of destruction. The occupiers are trying to obtain the passport data of the residents of the region by all means: through the issuance of humanitarian aid, through the issuance of car license plates, through the issuance of funds for children and 10,000 lifting funds allegedly under a federal program.

UKRAINE: On August 10, the Air Force Command of the Ukrainian Armed Forces reported the destruction of nine enemy aircraft in the temporarily occupied Crimea

During the day, the Armed Forces eliminated another 160 invaders and destroyed nine enemy aircraft – General Staff

The number of dead as a result of the night shelling in the Dnipropetrovsk region has increased to 13. Two wounded people died in the Marganets hospital

In Bucha, looters stole UAH 800,000 from pawn shops during hostilities

«They are hitting the cities, hiding on the ground at the ZNPP» – Yermak about Russian shelling of residential buildings in the Nikopol district

WORLD: The shelling of the Zaporizhzhia NPP did not lead to an «immediate threat to nuclear safety» – IAEA

«Putin will get even more NATO»: Biden signed protocols on joining the Alliance of Sweden and Finland

The occupying authorities of the linden «DPR» decided to hold a trial over the Ukrainian prisoners of war – fighters of the «Azov».

For this, the hall of the Mariupol Philharmonic is being prepared.

This was announced by Petro Andryushchenko, adviser to the mayor of Mariupol, on the air of the telethon.

«The occupation authorities of the Donetsk region want to hold a so-called tribunal of our «Azovians» in order to transfer their guilt to the Ukrainian side. As for the cages in the philharmonic hall, there are different views on this, but it is quite possible that this tribunal will be held in the philharmonic hall, because it is about the only surviving building in the place that can hold a large number of people. What will happen next is not known, but they are definitely preparing a tribunal. The only question is when it will happen. According to our information, it should happen at the end of August, or on beginning of September,» Andryushchenko said.