15 November: Atrocities of the occupiers in the Kherson region, a blow to Zaporizhzhia 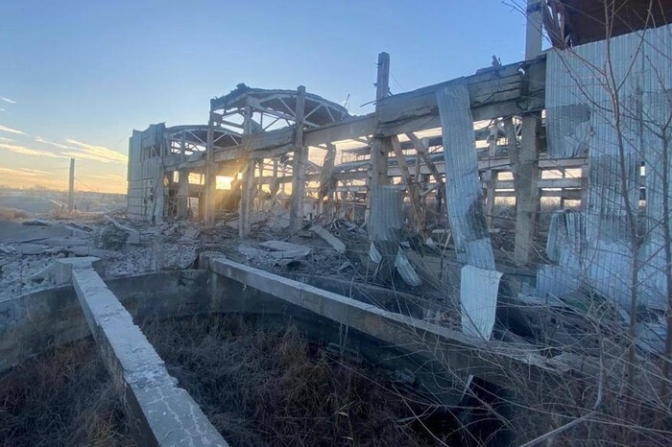 Yesterday, Russian attacks were repulsed from Novoselivske. Over the past day, the Russians opened fire from tanks, mortars, barrel and rocket artillery on Makiivka, Nevsky, Novoselivka, Ploshchanka and Stelmakhivka in the Kupiansk and Lyman directions. In total, the enemy hit the positions of the Luhansk region’s defenders with 21 artillery shells. Attacked from the air once. At present, it is known about the losses of the enemy after hitting the location of the Russians in Miluvatka in the Svatove region. Namely, the headquarters of the unit of the Russian occupation forces was destroyed, 30 people died and more than 20 were wounded.

Last night – missile strikes on Vuhledar and Pavlivka. At night – shelling of the outskirts of Mariinka, Toretsk, Ocheretyn communities. This morning, there was a massive shelling of Avdiivka, the central part of the city, hitting the area of ​​Tsentralny Ave. and the market. There was no information about injured civilians. The data is being verified. Along the line of defense around the city, shelling continued almost all night. In the morning – intensifying assault operations in the directions of Krasnohorivka, Vesele, Promka with the use of tanks and Infantry fighting vehicles. Over the past day in the region: one dead, one wounded civilian.

Yesterday evening, the Russians opened fire from machine guns along the border of the Znob-Novhorod community. There were 22 shots in total. No victims. In the morning, the Russian military shelled the Khotyn community with mortars. No consequences. In the morning, the enemy also fired mortars at the border village of the Bilopollia community. At the moment, it is known about the damaged electric poles, the garage and the barn. Detailed data on the consequences are being clarified. Over the past day, 143 enemy shells, mines and rockets exploded on the border of the Sumy region. There are destroyed houses and injured local residents.

Over the past 24 hours, the enemy continued to terrorize the civilian population of points located near the contact line and the border with the Russian Federation in the towns and villages of Chuhuiv, Kupiansk and Kharkiv districts. In the village Vovchanski Khutory, Chuhuiv district, as a result of the shelling, several private houses were damaged. In the village Boldyrivka, Kupiansk district, grain warehouses burned due to shelling. Three people were injured in the Kupiansk district.

Pyrotechnicians of the State Emergency Service continue demining the territory of the region. 141 explosive objects were neutralized during the day. Mine danger in the region is still very high. Yesterday, three railway workers were detonated by a mine near the Tsupivka railway station on the territory of the Derhachy community of the Kharkiv district. They are hospitalized with injuries, doctors assess their condition as moderate. In addition, in the area of ​​the village of Bezruky yesterday afternoon, a car «Kharkivoblenergo» was blown up by a mine, an electrician was injured. His condition is average.

During the past day, the occupiers shelled the civilian infrastructure in the area of ​​the settlements of Novodanilivka, Shcherbaki, Mala Tokmachka, Malinivka, Zaliznychne, Stepnohirsk, Bilohiria, Dorozhnianka, Temyrivka, Olhivska, Novodanilivka, Poltavka, Novoandriivka, Charivne, Novoivanivka, Gulyaipole, Mali Shcherbaki. 23 reports were received about the destruction of houses (apartments) of citizens and infrastructure objects as a result of shelling by Russian military personnel. Detailed information on the consequences is being clarified. During the past day, the evacuation of the civilian population from the temporarily occupied territory was carried out.

On the morning of November 15, the Russian invaders hit the suburbs of Zaporizhia with four rockets. S-300 missiles were probably used.

The Russians again kept the Nikopol region under tension. Marhanets, Nikopols and Chervonohryhorivka communities were shelled from «Hrad» and heavy artillery. There were no casualties. In Nikopol, a private enterprise, several private houses and high-rise buildings were damaged. Broken power lines, mutilated gas pipeline. Several farm buildings were destroyed. Details regarding the consequences of the shelling are still being clarified.

According to the information of Operational Command «Pivden», our missile and artillery units worked on the location of enemy units, places of concentration of weapons and equipment, and a warehouse with ammunition in Oleshki. The destruction of the S-300 launcher, the Tor-M2 anti-aircraft missile system and three units of armored vehicles was also confirmed there. Data on other enemy losses are being clarified.

The areas of Dudchany, Zolota Balka, Mykolaivka, Mylove, Chornobayivka, Odradokamyanka and Tomarine settlements were subjected to artillery and mortar shelling. As a result of the mortar shelling of Novooleksandrivka of Beryslav district last night, a local resident was injured and several residential buildings were damaged. The restoration of electricity supply and communication lines in the liberated territory of the Kherson region is underway. Assistance points will gradually appear. Neighboring regions also help.

UKRAINE: During the day, the Armed Forces eliminated another 710 occupiers and shot down two drones – the General Staff

An explosive «hello» from the Armed Forces arrived at the headquarters of the occupiers in Luhansk region: 3 dozen Russian soldiers were destroyed

The Russians from Kherson transferred their command to Henichesk

The Russians are not going to leave the rest of the occupied territories of Ukraine, heavy battles will follow – the Pentagon

«Kherson is free»: Zelensky called the deoccupation of the city a turning point in the war

Meeting of Biden and Xi Jinping: the leaders agreed on the prohibition of nuclear weapons, in particular in Ukraine

«Russia will not be able to occupy more Ukrainian lands»: Biden told what will happen next with the counteroffensive of the Armed Forces

The UN General Assembly adopted a draft resolution on the payment of reparations by Russia to Ukraine: 14 countries were against

Torture chambers of Russian invaders are also found on the territory of the region.

Law enforcement officers have already recorded 414 war crimes committed by soldiers of the Russian army in the de-occupied territories of the Kherson region.

The spokeswoman of the National Police of Ukraine, Maryana Reva, told about this on the air of the «Espresso» TV channel.

«Since the de-occupation of part of the Kherson region, the National Police of Ukraine has already recorded 414 war crimes committed by the Russian military. Most of them are violations of traditions and the conduct of war. That is, shelling, illegal actions with the civilian population, theft and collaborationism,» the spokeswoman said.

Reva said that, as of now, three torture chambers of Russians have been found in the de-occupied territory of the region.

«In particular, such places are found based on the testimony of people who talk about the actions of the occupiers. We will check all this information, but first of all, explosive devices must go there. I want to emphasize that every crime committed by Russians on the territory of Ukraine will be carefully recorded,» she summarized.

After the liberation of the right bank of the Dnieper, bodies of civilians killed by the Russian invaders began to be discovered in the de-occupied territories of the Kherson region.

On November 4, three bodies with traces of violent death were found in the village of Vysokopillia, liberated from the occupiers in the Kherson region. According to preliminary data, the Russian military shot three civilians and buried their bodies near private houses.

So, on November 12, it became known that the remains of people who were killed by the occupiers were discovered in the Beryslav district of the Kherson region. According to preliminary data, they belong to three local residents.

On Monday, November 14, in a village in the Kherson region, law enforcement officers discovered the bodies of a couple of farmers who were killed by Russian invaders in the basement.