17 November: Consequences of another massive shelling, a blow to the gas production infrastructure 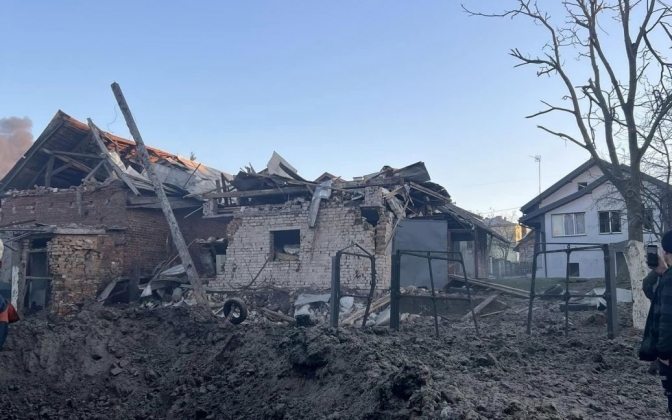 Thursday morning, 17 November, Russia again attacked infrastructure throughout Ukraine, including a strike on a Dnipro gas plant just as winter’s first snow fell in many cities. This comes just days after a much larger infrastructure attack that resulted in debris landing in a field in NATO-member Poland.

The sounds of explosions were heard in the Kyiv region. The head of Kyiv Regional Military Administration Oleksiy Kuleba previously confirmed the work of air defense forces and called on citizens to stay in shelters until the air raid ending is sounded.

At the same time, the Kyiv City Military Administration reported that our soldiers managed to shoot down 2 enemy objects over Kyiv during the alert. Around 10:00 a.m., 2 Iranian Shahed kamikaze drones were shot down over the Kyiv Reservoir.

On the eve of the air alert, the head of Regional Military Administration Oleh Synehubov warned about the threat of shelling.

At 10:53, the head of the Regional Military Administration, Oleh Synehubov, reported that the Russian occupiers launched rocket attacks on the Izyum district.

Fixed hits on critical infrastructure. Unfortunately, 3 workers were injured, the men were hospitalized,

There was information on Telegram channels about the work of air defense in the Kharkiv region, but there is no official confirmation of this.

Information about the alleged explosions in the Lviv region and the work of the Air Defense Forces appeared on the Internet. Unscrupulous Telegram channels even used an outdated message from the Regional Military Administration about explosions in the Stryi district of the region.

However, the head of Regional Military Administration, Maksym Kozytskyi, denied information about explosions in the region. As of 9:45, no explosions have been recorded.

Starting today in the Lviv region, the schedule of hourly outages continues around the clock, instead of only between 07:00 and 22:00. Each group of consumers will be disconnected, as before, for 4 hours, but twice a day. These are forced actions due to the difficult situation in the energy system after the missile strikes on energy infrastructure facilities. Repair crews are working around the clock to restore power to all homes

Around 8:30, explosions rang out in Dnipro. Subsequently, the adviser to the head of the President’s Office, Kyrylo Tymoshenko, reported that the enemy had hit 2 infrastructure facilities in the city, including a gas production facility and also a missile factory.

The mayor of the city, Borys Filatov, said that as a result of the rocket attack, according to preliminary data, 4 people were injured, including a 15-year-old teenager.

The head of Regional Military Administration Valentyn Reznichenko reported that the occupiers hit the industrial facility and the number of victims increased to 5 people. All are in hospital in a moderate condition.

As of 10:40, the number of victims has increased to 8 people. At 11:10, there were already 14 wounded – all of them were hospitalized. According to Valentyn Reznichenko, among them is a 15-year-old girl.

At 11:08 a.m., Volodymyr Zelensky published a video of a missile attack on the Dnipro

As of 10:20 a.m., no explosions were recorded in the Mykolayiv region, however, the head of the Regional Military Administration Vitalii Kim reported that Iranian Shahed drones were approaching the region.

On the morning of November 17, explosions rang out in Odesa as well. The head of the Regional Military Administration, Maksym Marchenko, said that the Russians launched a missile attack on an infrastructure object in the territory of the region.

The Odesa district administration clarified that according to preliminary data, 3 people were injured as a result of the impact.

UKRAINE: The total losses of the Russian Federation exceeded 83,000: during the day, the Armed Forces liquidated another 400 occupiers

In Melitopol, the Armed Forces of Ukraine destroyed the occupiers in their headquarters and set off «fireworks» for the enemy in Kinski Rozdory in Zaporizhzhia region

WORLD: Russia currently occupies 20% of the territory of Ukraine. At the same time, the Ukrainian army continues to pressurize the invaders and drive them out of our land – the Pentagon

Erdogan confirmed the extension of the «grain agreement» for 120 days

Falling of a missile in Poland: the EU’s Borrell blamed Russia

Canada considers Russia to be responsible for the fall of the missile in Poland, regardless of the outcome of the investigation

Losses of the Armed Forces: Danilov does not confirm the statistics of the US Chief of Staff

The fire caused by the shelling has already been extinguished.

On November 17, Russian troops launched a massive shelling of the gas production infrastructure of JSC «Ukrgazvydobuvannya» in the east of Ukraine.

Oleksiy Chernyshov, Chairman of the Board of Naftogaz of Ukraine, stated this.

According to him, several objects were bombed, others were damaged to varying degrees. There are currently no reports of casualties, but the information is being clarified.

Specialists assess the consequences and scale of the Russian attack on the infrastructure.

«At the moment, we know about several destroyed objects, others have suffered damage of varying degrees. Specialists of Ukrgazvydobuvanny quickly arrived at the damaged objects. They are currently assessing the consequences and scale of the attack. Information about the victims is also being established,» Oleksiy Chernyshov said.

The state emergency service has already extinguished the fire that occurred as a result of the shelling.