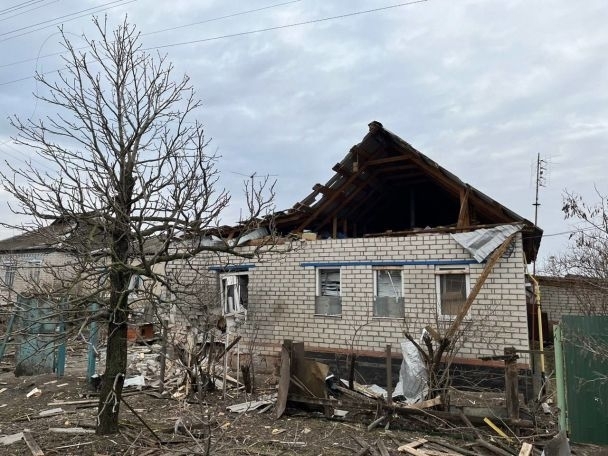 The enemy opened fire in the districts of Novoyehorivka, Nevske, Chervonopopivka, and Dibrova of the Luhansk region, as well as in Stelmakhivka. Heavy fighting is currently taking place in the Dibrova area on the approach to Kreminna.

In the Volnovakha direction, the Russians continuously shelled Vuhledar during the day – 6 houses were damaged. Bogoyavlenka was also fired upon twice in the community without casualties.

On the Donetsk side, there was intense shelling in the Ocheretyn community: the night before, the Russians targeted a kindergarten in Orlivka, and in the morning they shelled Vesele and Krasnohorivka. The night and morning passed loudly in Avdiivka: the city was hit by 4 artillery shells and 2 shells from «Hrad». We are still establishing the extent of destruction.

In the Horlivka direction, one person was injured in Ivanivske of the Bakhmut community. 2 houses and an administration building were damaged in the community. 1 more house was damaged in Pleschiivka, Kostiantynivka community. Constant shelling in the Soledar community: Paraskoviivka, Rozdolivka, Fedorivka and the outskirts of Soledar suffer, 3 houses are damaged in Vasyukivka.

In the Lysychansk direction, shelling of Siversk and Lyman communities was recorded: 4 houses were damaged in Zakitne.

On January 18, the Russians injured 4 civilians of Donetsk region: in Avdiivka, Khromove, Ivanivskove, and Chasiv Yar.

The occupiers continue to shell the border settlements of the Kupiansk, Kharkiv and Chuhuiv districts of the Kharkiv region. Yesterday, Kupiansk, Dvorichna, Vovchansk, Krasne, Kamyanka, Chuhunivka, Tabaivka and other towns and villages of the region were under enemy artillery and mortar fire.

In Kupiansk, a residential building and a private enterprise were damaged as a result of shelling. A private house was damaged in the village of Dvorichna in the Kupiansk district, and farm buildings were on fire. In Vovchansk, Chuhuiv district, the enemy shelled two two-story apartment buildings: windows were broken and the roof was destroyed. There is a hit in the outpatient clinic.

In the village of Vilcha, 5 private houses were damaged due to shelling by the occupiers. There was an «arrival» at the «Vovchansk Geriatric Boarding House», the windows of the building were damaged. It was also recorded that enemy shells hit the kindergarten.

Fortunately, there were no casualties.

The Russians bombarded Nikopol with «Hrads» and heavy artillery that night. More than 30 deadly shells landed in two communities – Chervonohryhorivka and Marhanets. Previously, people were not injured.

The occupiers have carried out 153 attacks on 17 settlements of the Zaporizhzhia region over the last day, and 28 reports of destruction have been recorded.

The sound that shook the regional center in the middle of the night was enemy fire aimed at the Matviivske community. The S-300 rocket fell in a field, and its explosion blew out all the windows in a local educational institution and nearby buildings. Fortunately, there were no casualties.

Yesterday, January 18, at 11:32 a.m. and 12:20 p.m., the enemy carried out artillery strikes on the water area and coastal strip of the Ochakiv community. There are no casualties.

Yesterday, 4 people were injured in varying degrees of severity due to Russian shelling.

UKRAINE: The total losses of the Russian Federation exceeded 118,000: in a day, the Armed Forces eliminated 760 invaders and shot down a helicopter – the General Staff

Why Putin convinces Russians that the war against Ukraine is another «Great Patriotic War»: ISW‘s answer

France is thinking about transferring Leclerc tanks to Ukraine – Politico

In addition to tanks, Britain will transfer 200 units of armored vehicles to Ukraine – Ministry of Foreign Affairs

The Biden administration believes that such a move by Ukraine would strengthen its position in any future negotiations.

US President Joe Biden’s administration is beginning to acknowledge that Ukraine may need force to strike Russian targets in Crimea, even if such a move would increase the risk of escalation.

This is reported by The New York Times with reference to several anonymous officials from the USA.

«For years, the United States has insisted that Crimea is still part of Ukraine. However, the Biden administration has taken a hard line since Russia’s invasion of Ukraine, refusing to provide Kyiv with the weapons it needs to target the Crimean peninsula, which Russia uses as a base to launch devastating strikes. Now this line is beginning to soften,» the article says.

U.S. officials said that after months of discussions with Ukrainian officials, the Biden administration is finally beginning to recognize that Kyiv may need force to strike the «Russian sanctuary,» even if such a move increases the risk of escalation.

The administration of the US president has concluded that if the Ukrainian army can show Russia that control over Crimea may be under threat, this will strengthen Kyiv’s position in any future negotiations. In addition, fears that the Kremlin would respond with tactical nuclear weapons have faded.

The publication notes that the Biden administration is now considering one of its boldest steps – helping Ukraine attack Crimea, which Russian President Vladimir Putin «sees as an integral part of his desire to restore Russia’s past glory.»

At the same time, the US president is not yet ready to provide Ukraine with long-range missile systems, which it will need to attack Russian facilities on the peninsula.