21 January: Germany did not agree on tanks, Britain to help create a tribunal for Russia 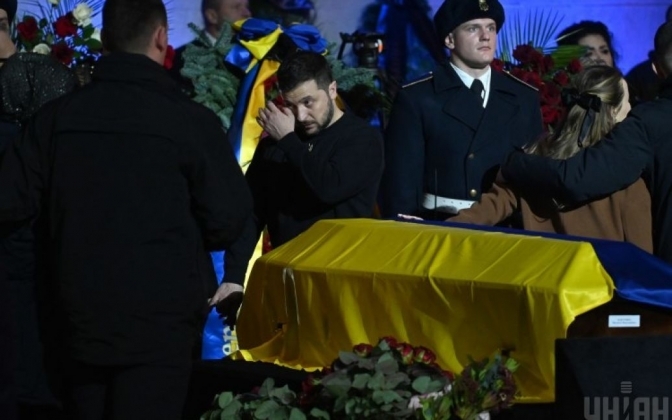 Over the past day, units of the Defense Forces repelled the attacks of the occupiers in the areas of Novoselivske, Ploshanka and Chervonopopivka. In the Kupiansk direction, the districts of Novoselivske and Stelmakhivka were shelled by Russian tanks, mortars, barrel and rocket artillery. In the Lyman direction, the enemy fired at Novoyehorivka, Makiivka, Nevske, Ploshanka, Holykove, Chervonopopivka, Kreminna, and Dibrova with all available firepower.

At night – rocket fire, fire in Kostyantynivska community, village. Bilokuzminivka The kindergarten building was damaged. Other data on damage and destruction are being established. In the evening, Toretsk and New York were shelled with Hrad anti-aircraft missiles, apartment buildings were damaged.

Also, in the evening and at night, there were several shellings of Kurakhove and its surroundings. Merry Guy. Six multi-apartment residential buildings, heating networks, a private garden house, medium-pressure gas pipeline networks, a direct hit to a trade pavilion, and private cars were damaged. As a result of the nighttime shelling, private residential buildings were directly hit, after which the private residential sector caught fire, and high-voltage lines were damaged.

Avdiivka direction: at night – shelling from the «Hrad» anti-aircraft missile system by the Russian occupying forces, shells hitting the «ATTU» checkpoint and the depot. In the morning – artillery shelling of Avdiivka, hitting Avdiivka vocational school #43. Information on damage, destruction and victims is being established. Along the line of defense around the city, the shelling continued almost all night, and in the morning the assault actions intensified in the directions of Krasnohorivka, Vesele, Vodyane, and Pervomaiske.

The situation near Bakhmut and Soledar is always tense.

In one day in the Donetsk region: three dead, four injured.

On January 20, during the day, the Russians shelled two border communities and hit them 27 times. The enemy fired mortars at Bilopillia community, and mortar fire was also fired at Esman. There were no casualties or damage. No shelling at night and in the morning.

The enemy continues to shell the border settlements of Kupiansk, Chuhuiv and Kharkiv districts. On the last day, the enemy shelled Vovchansk, Kupiansk, Strilecha, Vilcha, Ohirtseve and other settlements with barrel and rocket artillery, tanks and mortars.

The town of Vovchansk, Chuhuiv District, was the most affected by the shelling, where in the morning «arrivals» were recorded in a private house. A 60-year-old woman died as a result of the shelling. A 45-year-old woman and a 7-year-old girl were injured.

The occupiers shelled Nikopol again. Heavy artillery hit the Myrove community. No victims. There is destruction. Details are being clarified.

The enemy is intensifying regime measures in the temporarily captured territories of the Zaporizhzhia region. In particular, in the city of Melitopol, it has been announced that it will be prohibited to cross the checkpoints around the settlement from March 1 without special passes, which can be obtained at the so-called commandant’s office only after providing personal data.

In the morning of January 20, the enemy launched artillery strikes on the water area of the Ochakiv community. There are no casualties.

The enemy does not stop shelling settlements along the right bank of the Dnipro River. According to information from the General Staff of the Armed Forces of Ukraine, the occupiers once again shelled Antonivka and Kherson. A 15-year-old boy was wounded during an artillery attack on the village of Antonivka.

Novodmytrivka, Beryslav district: a man was blown up by a mine, his leg was torn off.

The Russians attacked the Dnipro district of Kherson. A private house caught fire after being hit by an enemy shell. The fire was extinguished. There were no casualties.

Unexploded Russian cluster munitions were discovered by the police at the Posad-Pokrovskyi school in the Kherson region. They were destroyed by a controlled explosion. In addition, National Police bomb technicians removed 172 explosive objects and destroyed 88.

During the day, two people were injured due to strikes by Russian troops, and two more were blown up by landmines.

The armed forces in Luhansk region are advancing, the occupiers are retreating near Svatove – ISW

WORLD: The «Wagner Group» intimidates the families of its fighters and forbids the inspection of coffins – ISW

Creating a picture of war: ISW explained why air defense systems were installed on the roofs of buildings in Moscow

In Poland, Germany was criticized for tanks: «Ukrainian blood is really being shed»

Tanks for Ukraine: a positive decision was not made in Ramstein

At the same time, the head of the German Defense Ministry is convinced that a decision on tanks for Ukraine will be made in the near future.

German Defense Minister Boris Pistorius said that the participants of the meeting in Ramstein on January 20 did not make a decision on the supply of tanks to Ukraine.

The minister said this following the meeting of the Contact Group on Defense of Ukraine, Ukrinform reports.

Pistorius explained that there are arguments «for» supplying tanks and arguments «against» put forward by different countries. However, he assured that «Germany will not stand in the way of partners.»

«The impression that there is a coalition where only Germany stands in the way is misleading,» the German minister assured.

At the same time, he announced that he had ordered an inspection of Leopard tanks in Germany. According to Pistorius, this does not mean much, but it can also be a preparation for a possible decision on the transfer of tanks.

«Training, long-term supplies and repair of equipment are important in helping Ukraine fight against Russia. Ukrainian troops must be ready for immediate use of the supplied equipment,» said the Minister of Defense of Germany.

At the same time, he expressed his belief that the decision on tanks for Ukraine will be made in the near future, but reminded that it remains up to Chancellor Olaf Scholz.

Previously, the day before in the German Bundestag, the parties were unable to vote on the issue of providing modern Leopard 1 and Leopard 2 tanks to Ukraine. Several factions opposed it.

The American media reported with reference to sources that the head of the Pentagon, Lloyd Austin, that even before the meeting in Ramstein, Germany was unable to agree on the transfer of Leopard 2 tanks to Ukraine at the meeting with Pistorius.