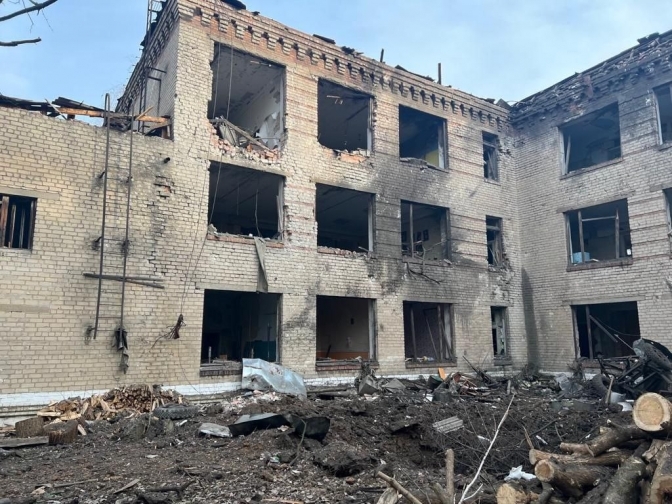 Last day, enemy attacks were repulsed near Stelmakhivka and Novoselivske. The enemy shelled the above-mentioned settlements in the Kupiansk direction. In the Lyman direction, Makiivka, Ploshanka, Chervonopopivka, Serebryansk Forestry and Kuzmyne came under fire from the Russians. The situation in the region remains tense.

During the day, four civilians were wounded in the Donetsk region due to shelling by the Russian occupiers: 3 – in Bakhmut and 1 – in Avdiivka.

Along the line of defense around the city, shelling continued almost all night, assaults – both during the day and at night. The most active destinations are Novobakhmutivka, Krasnohorivka, Promka. Shelling continues along the entire front line.

Active fighting is taking place near Bakhmut and Soledar.

Late yesterday evening, there was shelling of Chasiv Yar, high-rise buildings were damaged. During the day, there were active offensive actions in the area of settlements of Novobakhmutivka and Oleksandropol. At night, shelling of positions along the line of hostilities in the Ocheretyn community continued.

At night there was shelling on the territory of the Znob-Novhorod community. Information on victims and destruction of civil infrastructure is being clarified. This morning, the enemy attacked the Nova Sloboda community. As a result of the shelling, the village council, the cultural center, a two-story store that does not work, and a high-voltage power line were damaged. Information about the victims is being clarified.

During the past day, the Russians shelled the communities of Nova Sloboda and Shalyhyne. The enemy opened fire three times on the Nova Sloboda community. These were mortar attacks – a total of 15 attacks. The enemy hit the Shalyhyne community once with artillery.

In both cases, there were no casualties or damage, the Regional Military Administration noted.

In the Kharkiv Region, as a result of shelling by the Russian invaders, one person died and another was injured. Yesterday, the enemy continued shelling the peaceful settlements of Kupiansk, Kharkiv, Bohodukhiv and Chuhuiv districts.

In Kupiansk, an enemy projectile hit the yard of a residential building, and in Vovchansk, a private house was also hit. A 49-year-old man was injured. A 67-year-old woman was killed by enemy artillery fire in the village of Petrivka, Zolochiv community.

Also, around 10:00 p.m. on January 22, the enemy launched a rocket attack, previously from the S-300 air defense system, on the village of Pisochyn, Kharkiv district. An economic building was destroyed, no one was injured.

At night, the Russian occupiers shelled Nikopol in the Dnipropetrovsk region from «Hrad» and «Uragan». More than 20 enemy shells landed in the Myrove and Marhanets communities. The Regional Military Administration noted that no one was injured.

According to the information of the Kherson Regional Military Administration, the Russian invaders shelled the territory of the Kherson region 25 times. Fired from artillery, MLRS, mortars and tanks. The Russian army shelled Kherson 4 times. Enemy shells hit the shipyard and residential buildings. Yesterday, three people were injured in varying degrees of severity due to Russian shelling.

UKRAINE: In one day, the Armed Forces eliminated 720 Russian invaders and destroyed an enemy boat – the General Staff

The Russians are advancing in four directions, the Armed Forces fired at the positions of the occupiers – the General Staff

WORLD: The ISW called the catastrophic losses of the Russian army in Ukraine

The domino effect: the US House of Representatives called for tanks to Ukraine to push Germany to help

The Russian Federation is preparing the Crimea for defense: the intelligence told about the forces of the occupiers on the peninsula

The Russian command has even created a corresponding defense group on the territory of Crimea.

The Russian invaders are preparing for defense in the occupied Crimea and are carrying out fortification works.

General Vadym Skibitskyi, deputy head of the Ministry of Defense, told this in an interview with Ukrinform.

«The Kremlin is preparing for defense. The aggressor is not just carrying out these works, the Russian command has even created a corresponding defense group on the territory of Crimea,» he said.

Skibitsky clarified that not all enemy forces gathered on the occupied peninsula will be used during the spring offensive.

According to him, territorial troops – divisions and regiments, and not only Crimean formations – are entering Crimea.

Deputy Budanov admitted that the enemy’s territorial defense of Crimea began to form earlier than the Ukrainian forces.

According to the Main Directorate of Intelligence, two enemy divisions of territorial troops were created in the occupied Crimea. However, their training is weak.

«What if we take a reservist who served in the army 20-30 years ago, or if he served in the Soviet army in a construction battalion? Of course, the training of such reservists is unsatisfactory, and the motivation is much lower than in units of the regular armed forces of Russia,» the general concluded Vadim Skibitskyi.