24 January: Shortage of electricity, ban on the departure of deputies abroad 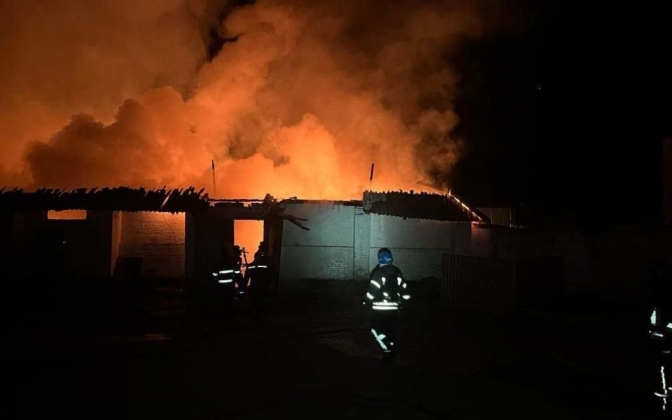 In the Luhansk region, units of the Defense Forces of Ukraine repelled another attack by Russians in the Chervonpopivka region.

At night, Russian troops carried out four missile strikes on the villages Rozlyv and Bohatyr.

At night, the enemy bombarded Avdiivka with artillery and Hrad anti-aircraft guns. There are hits in the central part of the city. In the morning, the Russians shelled the old part of the city. Along the line of defense around Avdiivka, shelling continued almost all night, accompanied by assaults.

The situation near Bakhmut and Soledar is difficult. Active hostilities do not stop. Paraskoviivka, the outskirts of Soledar, Vasyukivka, Fedorovka, Rozdolivka are under constant fire.

The situation in the Ocheretynsk community is tense: shelling of populated areas continued both along the line of hostilities and in more rear villages.

Three people died and three were injured in the Donetsk region during the day.

In the Sumy region, the enemy fired six shots from a large-caliber machine gun at night on the territory of Shalyhyne community; seven machine gun rounds and a signal rocket launch were recorded. Information about victims and destruction of infrastructure facilities is being clarified.

The Russians fired mortar and artillery at the Esman community, 30 Hrad rockets were fired at the village of Kucherivka. One woman died, three more people were injured. They are all members of the same family.

This morning, the enemy shelled Kupiansk again. Residential buildings have been hit, there have been fires.

In Vovchansk, Chuhuiv District, residential buildings, civil industry facilities, and infrastructure facilities were damaged as a result of shelling. One person was injured. In the village an educational institution and a cultural center were destroyed by missile fire in Vovchanski Khutory. In the village In Gatyshche of Chuhuiv district, a civil industry object was damaged, there were fires.

In the Kherson region, according to the information of the General Staff of the Armed Forces of Ukraine, the invaders shelled Antonivka and Kherson with anti-aircraft missiles. The Russians opened fire on civilian objects. A man died in Antonivka. Shell fragments damaged the building.

39 people, including two children, were evacuated from the liberated territory of the Kherson region.

In Kherson, two departments of state registration of civil status have resumed work.

UKRAINE: The losses of the Russian Federation exceeded 122,000: during the day, the Armed Forces eliminated 690 Russians – the General Staff

Capacity deficit: Ukrenergo spoke about the situation in the energy system

WORLD: Only a fifth of Prigozhin’s mercenaries remained at the front: the details provided by ISW

The Russian Federation is preparing for «decisive actions»: the ISW announced the timing of a possible new offensive by the occupiers

Disagreements among the military leadership continue in Russia. In particular, the Russian colonel-general Mykhailo Teplinsky, who was a respected commander in the Russian Federation, was probably dismissed.

Russian colonel-general Mykhailo Teplinsky was probably dismissed from his post. Before that, he was one of the key operational commanders on the Russian-Ukrainian front.

The British Ministry of Defense reported this on Twitter.

It is noted that Teplinsky was the leader of the relatively successful withdrawal of Russian troops from the west of the Dnieper in November 2022. As a result, he was considered a capable and pragmatic commander in Russia.

«There is a real possibility that the debate over the tasks that were added to the Airborne Forces contributed to its dismissal: the Airborne Forces were often used to hold positions traditionally reserved for motorized infantry,» British intelligence said.

At the same time, it is currently unknown whether Teplinsky, among other things, will continue to lead the airborne forces of Russia.

«Teplinsky’s dismissal is likely to be another sign of continuing rifts in the senior hierarchy of the Russian operation, as General Valery Gerasimov tries to impose his personal authority on the campaign,» the British Ministry of Defense said.

It will be recalled that earlier the Minister of Defense of the Russian Federation Serhiy Shoigu appointed the Chief of the General Staff of the Russian Armed Forces, General Valery Gerasimov, as the new commander of the United Group of Russian Forces in Ukraine. In this position, he will replace General Serhii Surovykin.

With the arrival of Gerasimov’s command, he first of all decided to bring order to routine discipline in the Russian army. This caused a stir among the occupiers. British intelligence found out that such measures in the Russian army were met with skeptical responses. So, the demands for military personnel to shave more often caused the most ridicule.