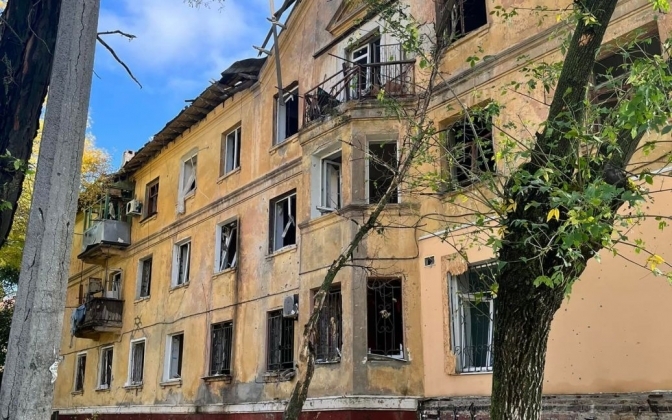 UKRAINE: Russia’s losses: during the day, the Armed Forces eliminated another 430 invaders and shot down four cruise missiles

The Armed Forces repelled the attacks of the occupiers in 12 areas in Donetsk region, and the Russian Federation threw «freshly mobilized» soldiers into the Lyman – General Staff

In Mariupol, a series of loud explosions are reported in different parts of the Russian-occupied city

The USA will launch a lend-lease program for Ukraine from October 1. The US aid package will include 18 HIMARS missile systems

«If you want to live, run»: Zelensky called on mobilized Russians to fight for their own, not to «climb» to Ukraine

In just two days, 60 units of camouflaged enemy equipment were discovered: Reznikov on the operation of the ICEYE satellite, which was purchased by the Ukrainians

WORLD: In Russia, men were forbidden to leave their place of residence without the permission of the military commissars

Sanctions against Russia: the European Commission announced proposals for the eighth package

The more unity we have, the more tangible Russian defeats – Zelensky

There are many discussions about democracy in the world now.

About what threatens democracy. About how democracy can be protected. And about what needs to be done so that democracy still wins in the global confrontation.

This was stated by the President of Ukraine Volodymyr Zelensky at the Athens Democratic Forum, – writes the website of the head of state.

People feel that right now something is happening that could become decisive in the centuries-old confrontation between democracy and tyranny.

«And it is precisely in this address, precisely to the Athens Democratic Forum, that I want to say that I am sure: we will be able to guarantee the future of democracy, we will be able to protect it. We will be able to, because we know what gives democracy strength, what serves as its heart, which provides supplying freedom like blood to every part of a democratic society – to every person. This is unity. Unity is the most important thing,» he said.

Democracy is the rule of law, it is respect, it is procedures, it is the equality of the free and freedom for all. But all this works only under the condition of unity, only then is all this saturated with real freedom, all this is solid.

When societies are completely atomized, when there are no stable ties between peoples, when someone may not come to the aid of another in a democratic community, democracy weakens, does not have time, falls apart.

«We have already seen this more than once in history. We have seen how a small but energetic and maximally united tyrannical minority or party is able to subjugate the social majority if the majority of people are scattered and do not trust each other.

We have seen that people can become disillusioned with democracy if they feel unequal and humiliated, if people lose emotional connection with their representatives in power. The consequence of this can be fascination with someone autocratic. And then?... Often a tyrant begins to destroy his own society just to preserve his personal power. This is exactly what happened in Russia over the past 30 years.

So unity is a universal answer,» the president added.

Unity in society is for people to feel a connection with each other, for people to have something in common and for this commonality to develop, giving more freedom, more comfort, more well-being.

Unity between societies, between states. All democracies should act united, be a real community, and help each other when necessary. This is not only a matter of relations between the leaders of the states. It is not a question of who is or is not historically related to whom. This is a question of struggle for a democratic system.

When we are truly together, no one will be an insurmountable threat to us.

We see this now in the war that Russia has waged against our people and against our common democratic system. The more unity we have, the more tangible Russian defeats.

And the third element is very important for every democratic country – unity between those in whose hands the power is and those who entrusted this power.

Democracy does not live in the government offices or even in the parliament hall. Democracy lives between people. And that is why it is so important that there are no isolated groups in societies – be it the ruling group, or any other privileged groups, or any unintegrated minorities.

After the full-scale invasion of Russia into Ukraine, we managed to achieve the greatest unity of Europe and the democratic community of the whole world in decades. But the largest does not mean the maximum.

We have a lot to do to further strengthen our unity. And every such step to strengthen is a step to protect democracy. Not just somewhere, not just in some country, but in general – for all of us and for our children.

«For all free peoples. Forever free. I thank you for your attention! Thank you, Greece, for your strong support! And with great honor I accept the award of the city of Athens for the Ukrainian people, for our people for their contribution to the protection of democratic values,» he summarized the President.

Over the past day, two command posts, Ukrainian Army hit seven areas of concentration of enemy manpower, weapons and military equipment, one repeater station, three EW stations, two warehouses with ammunition and one with fuel and lubricants.

Enemy attacks were repulsed in the areas of Zaitseve, Mayorsk, Zalizne, Bakhmutske, Odradivka, Mykolayivka Druha, Ozeryanivka, Pervomaiske, Pobeda, Nova Mykhailivka, Pavlivka, and Bezimenne. The enemy fired at the positions of our Defenders with various types of weapons. In particular, he launched 15 artillery and mortar attacks, 2 airstrikes.

At night – active combat operations near the settlements of Pisky, Vodiane, Pervomaiske, and Netaylovo.

In the morning – shelling of the outskirts of Soledar (Sil station), massive shelling of the central part of Avdiyivka. Information about the victims is currently being clarified. In the Donetsk region, 5 civilians were killed and 4 wounded in the past 24 hours.

Yesterday, the enemy roamed the territory of the Krasnopillia community. As a result of mortar shelling, a high-voltage power line was partially damaged.

As a result of shelling, two houses in one of the villages were damaged. No victims. Yesterday evening, the Seredyno-Budsk community was shelled. 6 mortar attacks and five from artillery. Fortunately, without consequences.

Over the past day, the Russian occupiers continued shelling the territories of Kharkiv Oblast, adjacent to the contact line and the border with the Russian Federation. The villages of Dvorichna, Hrushivka, Senkove, and Kolodyazne were shelled in the Kupiansk district.

According to the regional Center of Emergency Medical Assistance, 7 people were hospitalized with injuries during the day, all in the Kupiansk district. Demining continues in the de-occupied territories. During the day, 586 explosive objects were neutralized by the pyrotechnics of the State Emergency Service.

At night, the Russians launched a missile attack on the Dnipro. At this time, it is known that three dead people, one of them is a child. Five more people were injured, including a 12-year-old girl.

Several private houses were destroyed by the attack. Rescuers are sorting through the rubble, looking for people. There is a possibility that there may still be children there.

Yesterday evening, our anti-aircraft defense shot down four enemy missiles. One rocket flew into a grain processing enterprise. No casualties.

At night, Mykolayiv was hit, previously by a S-300 type missile. It is known about open territory being hit, as a result of which civilian objects, including a museum and a primary school, were damaged. There are no casualties.

The Berezneguvate community remains under constant fire. Yesterday evening there was shelling in the village of Chervonyi Yar, at 10:47 p.m. explosions on the outskirts of the village Lepetykha There were no injuries or damage. Berezneguvate village was shelled at night. As a result of shelling, a warehouse building was destroyed. Private houses, trade facilities and private enterprises were also damaged. Information on victims and victims is being clarified.

The shelling of the Shyroke community continues. In the past day, there was a hit outside the Shyroke settlement, in an agricultural enterprise, gardens and roads. There were no injuries or damage.

The situation remains very difficult. Fighting continues. The occupiers once again shelled Beryslav and Kherson districts. Arkhanhelske, Myrolyubivka and Tverdomedov came under enemy fire. Civilian infrastructure was damaged. The greatest amount of destruction due to «arrivals» was recorded in Bila Krynytsia.

According to the information of Operational Commander Pivden, the enemy tank platoon tried to launch an offensive in the direction of Chkalov – Bezymenne. One tank blew up on a mine, two retreated.

Our aircraft struck the enemy 5 times, and the missile and artillery units fired 250 fire missions, hitting, in particular, a checkpoint and an ammunition warehouse in the Beryslav district. Orlan-10 unmanned aerial vehicle was also destroyed in the Kherson district.