6 August summary: Occupiers killed five civilians in the Donetsk region, China stopped cooperation with the US 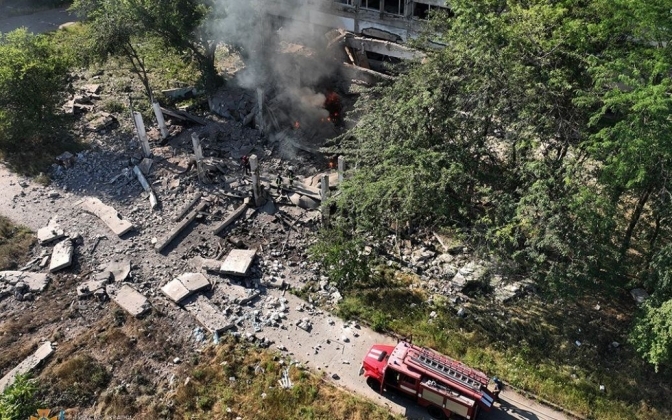 Over the past day, the enemy fired five rockets on the front line between Luhansk region and Donetsk region, and the occupier’s barrel and rocket artillery worked six more times. Mortars were used three times, Russian assaults were supported by tank fire and aviation.

Currently, the «campaign and explanatory component» of preparations for the referendum on the region’s inclusion in the Russian Federation has been activated in the Luhansk Region. Under the guise of providing food or construction materials, the occupying power and the collaborating public movement organize meetings with the population of the recently captured territories of the region.

In the area of ​​the village of Pisky, fighting took place throughout the night. Around 06:30 – artillery shelling and shelling from the Uragan MLRS with cluster munitions of the village of Pervomaiske. Evacuation of the population continues. The region remains without gas and partly without water and electricity. 5 dead and 14 wounded in the region during the day.

Mortar shelling continued in the Bilopillia community this morning. There is no information about the consequences yet.

Yesterday, during the shelling of the Shostka district, the Russians hit a house of civilians. The wounded 52-year-old man is currently in the hospital. The power grid was damaged, 71 households in the district were left without electricity. Emergency services are working.

The occupiers struck Kharkiv again – at night, they struck the Slobidskyi district of Kharkiv, the roof of a one-story non-residential building was on fire. Also at night, a rocket was hit in the Kharkiv district. There are no victims or injured. In the region, the enemy repeatedly attacked the Zolochiv community, causing damage to private homes and commercial buildings. There are no victims.

The Russian army again shelled Nikopol district and Kryvyi Rih district. 20 arrivals from «Hrad» in the city of Nikopol. Three people were injured, one of them is in the hospital, two were given help. 11 five-story buildings and 36 private houses were damaged in the city. The gas pipeline, water pipeline and powerline were disabled. Several thousand people are without electricity.

In the Kryvyi Rih district, the enemy shelled the Zelenodolsk community. Damaged power line in Marianske. Part of the village is without electricity. People were not injured.

Tonight, the enemy launched rocket attacks on the city of Mykolayiv, as a result of which two people were injured. Residential buildings were also damaged. Detailed information on the consequences of shelling is being clarified.

Bashtan district: this morning – shelling outside the villages of Polyana, Stepove, Shyroke, and Chervona Dolyna. As of now, shelling is also taking place with some frequency in the Shyroke community. There are no casualties. Yesterday evening, the village was shelled. Chervona Dolyna of the Shyroke community. Residential buildings and agricultural buildings in households were damaged. There was also shelling near the village of Shyroke yesterday.

The Russian military is trying to regain lost positions and continues shelling neighboring regions. The villages of Bilohorivka, Ivanivka, Potemkine, Osokorivka, Posad-Pokrovske came under the fire of the occupiers. The main topic on all propaganda media of the occupiers is the holding of the referendum.

UKRAINE: The Armed Forces eliminated another 250 occupiers and a dozen Russian tanks

In one day, the occupiers killed five civilians and wounded another 14 people in Donetsk region

The occupiers hit the site near the Zaporizhzhia NPP: the Ministry of Foreign Affairs warned of a nuclear threat

British intelligence: the Russians are concentrating in the south, expecting a counteroffensive from Ukraine

«They went all in,» Danilov explained that Russia is taking reserves from the Far East: equipment, ammunition, and personnel

International reserves of Ukraine amounted to 22.4 billion dollars USA according to the results of July – National Bank of Ukraine

In Ukraine, 903 objects belonging to Russia are confiscated: the government’s decision

The head of Amnesty International’s Ukrainian office, Oksana Pokalchuk, is resigning after the organization’s report

WORLD: The President of Ukraine, Volodymyr Zelensky, announced that on August 5, three ships with grain for export left the ports of Odesa and Chornomorsk, with almost 60,000 tons of corn on board

In the USA, a state of emergency was declared due to monkeypox

China stops cooperation with the US. The White House considers Beijing irresponsible

A singer will be a judge in Belarus: in the center of Minsk, she performed songs by «Okean Elzy»

The street concert of the Minsk singer Meriem Gerasimenko attracted the attention of Belarusian propagandists and security forces.

Belarusian singer Meriem «Hera» Gerasimenko was detained after she performed tracks by the famous Ukrainian rock band «Okean Elzy» during her performance in the center of Minsk near the Banky-botylki bar. In particular, the vocalist sang the hit of the band «Obiymy» («Hugs»).

As the Belarusian publication «Zerkalo» reports, after the concert, Meriem published videos from the concert on social networks, leaving emoticons and stickers in blue and yellow colors on them.

Thus, the singer attracted the attention of propagandists and security forces, who had been following her activities before. In particular, Belarusian law enforcement officers, having tracked the movement of funds on her account, came to the conclusion that she donated a certain amount for the purchase of «Bayraktar» for the Armed Forces of Ukraine.

Supporters of Lukashenka’s dictatorial regime did not like the fact that the singer performed at a street concert in a white T-shirt with a red heart on her chest. As you know, the white-red-white flag in Belarus is considered the main symbol of protest.

After the performance, Meriem Gerasimenko stopped appearing on social networks, and the phones of her studio were not answered. Informed sources claim that the singer has been detained

According to local Telegram channels, the trial of the singer should take place on Monday, August 8.