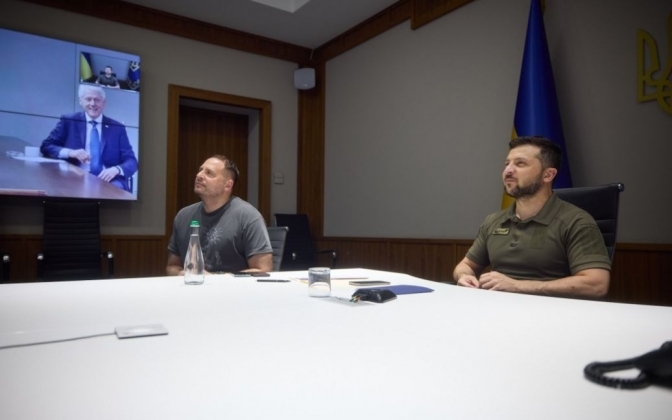 Over the past day, our military stopped 10 enemy attempts to storm towns and villages on the border of Luhansk region and Donetsk region. The occupier’s aircraft tried to operate near eight settlements. At night, the Russians launched a rocket attack, made two attempts at tank attacks, and damaged populated areas with mortars.

At night and in the morning – shelling of the Marinka community, in particular, Krasnohorivka (there are wounded), a rocket attack on the village of Kostiantynopolske of the Kurakhiv community (destruction of the buildings of the rural enterprise). An attack on the city of Kostyantynivka. The settlements of Avdiivka, Bakhmut, Kostyantynivka, Krasnohorivka, Soledar, Chasiv Yar, were under fire for the past day. Ivanivka, village Ivanovske, village Karlivka, village Staryi Komar, village Pervomaiske, village Pisky. Two high-rise buildings, 41 private houses, and a police station were damaged. Three people died and 19 were injured in the region during the day. Mandatory evacuation continues.

Night shelling of the city of Kharkiv in the Oleksiivka district, the facade of the building was partially damaged – the roof and windows, there were no casualties. In the Industrial District, the projectile hit an open area. Electric resistance and tram rails were damaged. In the region, the occupiers shelled Bohodukhiv, Lozova, Chuhuiv, and Kharkiv districts. In one day, three people were injured in the region.

At night, the enemy shelled the Nikopol and Synelnykove districts. In Nikopol, one person was injured – in the hospital. Several residential buildings were damaged, shops, workshops, administrative buildings and transport were damaged at three enterprises.

In the Synelnykove district, the Velyka Mykhailivka community came under fire. There is destruction of an apartment building. Previously, there were no casualties.

The settlements of the Halytsyn community are under constant enemy fire. During the day yesterday, the village of Halytsynove was shelled. This morning, the village of Lymany was shelled. The consequences are clarified. Shelling of the territory and nearby settlements of the Berezneguvate community continues. Berezneguvate village was shelled at night. Residential buildings were damaged. Information on victims and damage is being clarified.

The situation is tense, hostilities were observed in all communities during the day, the situation is steadily critical in the Beryslav and Kakhovka districts. Many villages are again shelled by various types of weapons, Russian troops are trying to regain lost positions. But without results. The occupation authorities have increased the number of assistance points, this is done to collect personal information in the Kherson region. The issuing of various lifting amounts from 4 to 10 thousand rubles (to schoolchildren, children, pensioners) also continues, and also in exchange for passport data.

UKRAINE: The Armed Forces of Ukraine repelled the offensive of the occupiers near Krasnohorivka and Avdiivka – General Staff

Enemy losses: during the day, the Armed Forces eliminated another 300 invaders, shot down a helicopter and three cruise missiles

15 people were buried in Buchi, whose bodies were not identified. They were tortured and shot by the Russians

The priority is the army and security: the Cabinet of Ministers is already working on the 2023 state budget

Let them live in their own world: Zelensky called on the West to close its borders to Russians

Blinken explained why the US will not allow Russia to seize Ukraine. This will lead to the fact that the world will «begin the season» of such wars

In Transnistria, they are training to conduct mobilization – Odesa Regional Military Administration

The main focus of the war shifted to the south: the Pentagon – about the situation at the front

«Return Russia to the USSR»: Estonia called to stop issuing visas to the EU to Russians

«The US helps prevent Russia from freezing the conflict»: what Zelensky and Clinton talked about

The President of Ukraine Volodymyr Zelensky met with the 42nd President of the United States of America, Bill Clinton, in the format of a video conference.

The website of the head of state writes about this.

The head of state thanked for the comprehensive support from the USA at various levels, as well as for the personal support of Ukraine from Bill Clinton and his wife, in particular for the participation in the Summit of First Ladies and Gentlemen.

«The USA is helping us to prevent Russia from freezing this conflict. And this is exactly what Russia wants. We know very well what happens with «frozen conflicts». It stretches for years, tens of years. We cannot allow this,» Volodymyr Zelensky said.

The head of state emphasized the importance of further strengthening of sanctions against Russia. He called on Bill Clinton to use his personal authority to draw the attention of the world community to the shelling and mining of the Zaporizhia NPP and Russia’s nuclear terror.

«It is very important for us that societies where freedom and democracy are basic values ​​do not lose their sense of the urgency of the war in Ukraine. That is why conversations like this one are very useful for us,» the President of Ukraine said.

Volodymyr Zelensky spoke about the defense needs of our country. The interlocutors also discussed participation in future international events.