Eight Years On from Euromaidan Revolution’s Beginning, Spiritual Leader Urges Ukrainians to «Learn to be Free»

15:14 24 November 2021
Tweet
242 0
The Revolution of Dignity, or Euromaidan, began on the Feast of St. Michael in 2013 when thousands took to Kyiv’s main square--maidan--in protest of the regime of President Yanukovych, who was steering Ukraine away from Europe and toward Moscow. Eventually the president fled, and a new era began. Recalling those events, Ukraine’s Greek Catholic patriarch spoke of «victory of good over evil, dignity over dishonor, freedom over slavery». 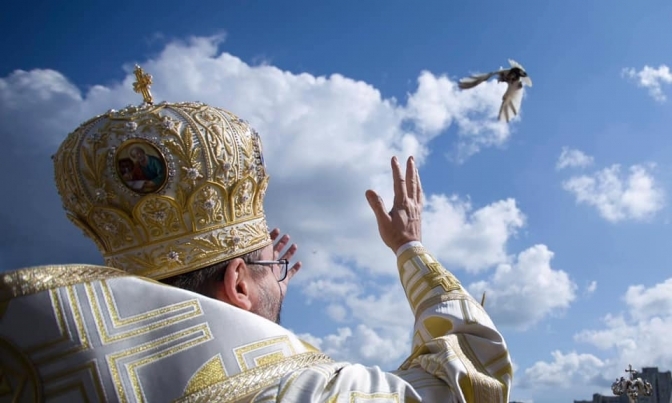 Last Sunday, as reports increased of a Russian troop build-up on the border, Ukrainians celebrated the eighth Day of Dignity and Freedom, which commemorates the beginning, on 21 November 2013, of the Revolution of Dignity, or Euromaidan. That day is also the eastern-calendar Feast of St. Michael the Archangel, a saint to which Ukraine has attachment. On this dual-occasion, the leader of the Ukrainian Greek Catholic Church, who functions as a patriarch in union with the Pope, gave remarks in Lviv on the nature of freedom and dignity.

Ukraine has strong ties to the idea of St. Michael: This year, President Volodymhyr Zelenskiy proposed adding the archangel to Ukraine’s official Trident emblem. And nine days after the Euromaidan revolution started on St. Michael’s Day, the then-secret police, the Berkut, used force against the protesters, ultimately killing many, now known throughout Ukraine as «the Heavenly Hundred.»

Seeing the situation unfold, the Orthodox monks at the St. Michael Golden-Domed monastery near the main square in Kyiv began to toll the bells signaling solidarity and calling others to join; the monastery became more or less a fortress for the protestor. The people stood their ground and eventually in February 2014 President Yanukovych fled to Moscow, ushering in a new era of Ukrainian culture and life.

His Beatitude Sviatoslav Shevchuk, the major archbishop of Kyiv-Galicia and the head of Ukrainian Greek Catholic Church (UGCC), based in Kyiv, led a liturgy at Lviv’s St. George’s Cathedral, during which he called on the faithful to be worthy and free, to honor the memory of the Heavenly Hundred and other participants in the national liberation struggle.

«Archangel Michael teaches us that in every case we should be wise, able to be worthy and free. On this day, Ukraine celebrates the Day of Dignity and Freedom. It is not enough to have dignity, it is necessary to be worthy. We must live in accordance with the dignity we have received as Christians and citizens of an independent Ukrainian state. It’s not enough to have freedom – you need to be free, learn to be a free person. What does it mean? To be free means to always choose the good,» – said His Beatitude Sviatoslav.

The Metropolitan explained that if someone only sees freedom as an opportunity to choose good or evil, he actually carries the spirit of slavery, which makes him easy to be seduced. According to the head of the UGCC, true freedom is experienced as an experience of personal free existence, when a person has no doubts about what to do, and always chooses the good in all circumstances. This helps her discover her own dignity to love God and neighbor.

His Beatitude Sviatoslav (Shevchuk) noted that the example of those who struggled for freedom and independence of Ukraine gives meaning and sense to our current struggle.

«Today, we commemorate the Heroes of the Heavenly Hundred, the Revolution of Dignity and Freedom. We commemorate the participants in the national liberation struggle. Their example, personal life choice shows what to live for and [what’s] worth dying for. Their preparation gives meaning and content to our today’s struggle,» – the Metropolitan is convinced.

At the same time, the head of the UGCC recalled the words of a prisoner in the Donetsk torture chamber, who said that only those who had not lost the meaning of their lives and their struggle could endure torture.

«When I choose to love Ukraine, no one will ever discourage me. That is why this memory of our heroes is so important on the Day of Dignity and Freedom and on the Day of Archangel Michael, who calls us to be participants in the victory of good over evil, dignity over dishonor, freedom over slavery,» – Sviatoslav Shevchuk concluded.

Greek Catholicism is a Christian confession which acknowledges Catholic doctrine and is in communion with the Pope, but maintains Eastern rites and rituals, including married priests. It emerged in 1596, when a part of the Orthodox Church recognised the supremacy of the Pope. Later, the Ukrainian Greek Catholic Church became mostly localised in the Western Ukraine, becoming one of the markers of the national identity for the region’s population during Austrian, Polish and Soviet rule. Currently, Kyiv is the center of Ukrainian Greek Catholic Church, and it is present in many regions of the country, though Galicia, where Lviv is, still remains its bulwark. It also has a strong presence among the Ukrainian diaspora, espeically in parts of Canada, the United States, and Australia.

We will add that His Beatitude Sviatoslav Sunday 21 November presided over the Episcopal Liturgy in St. George’s Cathedral in Lviv. It was held on the anniversary of the Lviv Metropolitanate of UGCC, founded ten years ago. You can watch the liturgy here: