Friday 13 May 2022: Ukraine Situation Summary: The first trial of occupiers’ of war crimes, telephone call between Putin and Scholz, bombing of Azovstal

President Volodymyr Zelensky stated that Ukrainian society did not accept the idea of ​​Pope Francis, when a Ukrainian and a Russian woman symbolically carried the flags of both countries together in Rome.

Now in Ukraine the Russian flag is perceived as a symbol of invaders, the head of state stated.

The first trial of the occupiers’ war crimes has begun in Ukraine. Russian Vadim Shishimarin is accused of killing a civilian in the Sumy region.

A recent video of the Russian occupiers’ bombing of the Azovstal plant in Mariupol has been published on the Internet.

Three points from my long phone call with # Putin today:
There must be a ceasefire in # Ukraine as quickly as possible.
The claim that Nazis are in power there is false.
And I also reminded him about Russia’s responsibility for the global food situation.

For example, the 72-year-old Hollywood star has put up for auction his 1999 Jaguar XK8 convertible.

This is stated on the auction platform Bring A Trailer.

«The full amount of the sale will be evenly distributed between World Central Kitchen and Open Arms Ukraine, both of which are non-profit organizations that help those affected by the war in Ukraine,» the lot said.

The report says that the car is currently in New York. The car has a 4-liter engine and a five-speed automatic transmission. Total mileage: 48.2 thousand km. The Carfax report did not mention any accidents.

It is also known that the auction will end on May 18. 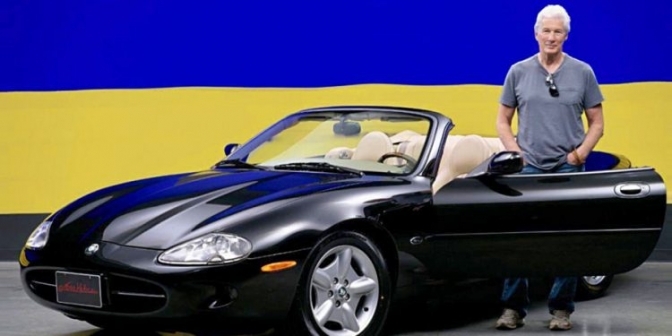 At night there were artillery shelling of Avdiivka – houses were damaged, one person was wounded.

The occupiers continue their offensive near Mariinka and Novomykhailivka. The Ukrainian military is holding them back. The enemy suffers devastating losses.

Tensions are not decreasing in the Lyman direction and near Svyatogorsk. Constant shelling by artillery and aircraft. Significant destruction. Azovstal – under air, tank, ship and artillery strikes.

There were 31 shellings per day. Russians storm Severodonetsk, Hirske and Popasnyanska communities: almost 60 houses are destroyed, and bridges in Rubizhne are damaged.

There were artillery shellings of Lysychansk and Severodonetsk at about 11 p.m. One person died in Lysychansk as a result of shelling. Details of the aftermath of the shelling are being clarified.

The situation is becoming more critical. The problem with forest fires in the region. According to preliminary data, the fire covered more than 1,587 hectares of forest.

Fighting continues on the border with Mykolayiv and Dnipropetrovsk regions. The occupiers continue to strengthen their positions and are shelling neighboring areas from the region.

As a result of the fighting – a large amount of damaged infrastructure, homes of civilians.

The fire, which broke out at the refinery, was contained. There are no casualties.

The situation is becoming more critical. The problem with forest fires in the region. According to preliminary data, the fire covered more than 1,587 hectares of forest.

Fighting continues on the border with Mykolayiv and Dnipropetrovsk regions. The occupiers continue to strengthen their positions and are shelling neighboring areas from the region.

As a result of the fighting – a large amount of damaged infrastructure, homes of civilians.

The night in Kharkiv was relatively calm. During the day, three people were injured in the shelling of Kharkiv.

In general, Derhachi (2 wounded, one person killed), Zolochiv district (2 victims), Balakliia district (one person injured) were shelled in the region.

Produced with support from ukrainianfreedomnews.com. There you can support Lviv local media-hub Tvoe Misto via PayPal or Bitcoin; please write to lvivlab2020 [at] gmail.com if you would like to designate a donation to Tvoe Misto. Through our friends at Ukrainian Freedom Fund, a 501(c)(3) nonprofit, U.S. tax deductible donations are possible