Little stories of a big war. Nariman: I have found a greater love for the Ukrainian people and their unity

17:46 17 June 2022
Tweet
319 0
Ukrainian Catholic University in Lviv has launched the project of interviews with Ukrainians from different cities to share their feelings during this war. Here we publish them with the creators’ consent. 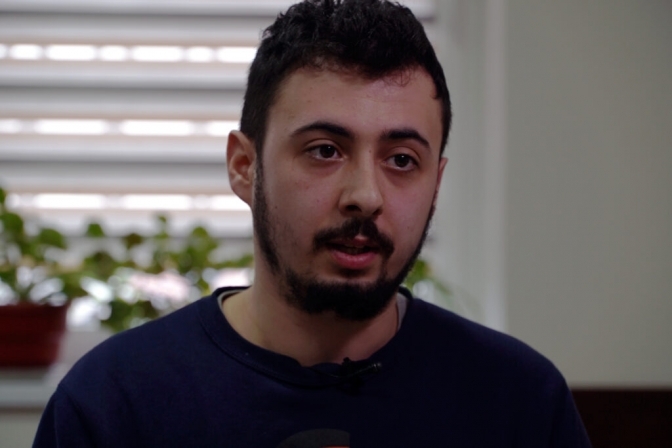 Nariman and his family escaped from Nova Saltivka, a neighborhood in Kharkiv. Prior to the full-scale invasion he worked as a chef and baked pizza. His wife had recently given birth a second time and the man was taking care of her and making plans for their future. On February 24th, rockets pierced the peaceful sky above Kharkiv, blowing up the life of the young family.

«Little stories of a big war» is a project by the Ukrainian Catholic University, dedicated to ordinary Ukrainians, and their zeal and readiness to help in conditions of war. Explosions disrupted peace, the invasion dispelled dreams. Now in a safe place, they rock their children to sleep trying simultaneously to lull their longing for home. Their lives now fit in a coat pocket, their world – in their children’s hands.

«It had been eight days since [my wife’s] labor. We were awakened at five in the morning by a loud racket. Everything was shaking, the window panes shattered. At first I thought it was fireworks but then I saw on the news it was [the start of] the Russian invasion. Right up until it happened we were hoping it would pass us by.»

Read also: «Bet on it: we will sing when we win.» Little stories of a big war

The city quickly developed shortages of water and food staples. There were massive lines and empty shelves in stores. North Saltivka had no heat, hot water or power. Nariman tells us that whenever they heard explosions the family would keep going to the basement.

«Our building was hit by three rockets. It’s an unimaginable sound. I was worried that the baby’s eardrums might burst. The lobby was covered with shattered glass and full of smoke. We were 30 minutes late to escape being hit by rockets. But we still managed to get out in time, because the gas pipe exploded later. Everyone was running. There were dead bodies. There was a massive crater in the backyard from the rockets. We flagged down a car and were on our way. The house kept burning. What we have here is all that we have left, all that we managed to collect.»

Nariman and his wife went to the Tractor Plant – another area of Kharkiv, but the situation there was soon just as bad.The family decided to leave the city. The man says that the train station was crowded, but members of the military provided assistance. Completely packed with people, the train traveled at night. The trip took 20 hours. Because of air raids the train would stop, attendants would kill the lights, and passengers would wait in the dark for hours.

«We were happy to go anywhere just as long as we didn’t have to hear explosions every minute.»

That was how Nariman’s family ended up in Lviv. They have no relations or friends here, but fate decided that Benedictine nuns would shelter the family in their convent. The couple and their children are still there.

– Do you have family still in Kharkiv? Are you in touch with them?

– «Yes, they live in various neighborhoods in Kharkiv. Everyone left North Saltivka; only seniors with no family and no way of escaping have stayed behind. My parents went to Sakhnovshchyna, a suburb. They encouraged us to join them, but there was a possibility that war would reach us there as well. We decided not to risk it, so we went to Lviv.»

– When the offer was made for you to stay at the nunnery, what did you imagine it would be like?

– «I thought there would be a room with other people; I did not imagine they’d give us a separate room. We were told that a man would most likely have to stay separately, according to their rules, but they made an exception for us, allowing us to be together. I am incredibly grateful.»

– «Me and the family have started recovering. After Kharkiv my wife is still fearful of going outside. We eat well because we’ve lost a lot of weight. My wife is still not recovered after her pregnancy, she needs to see a doctor, her thigh is injured, she still has a limp.

A sense of security begins to set in, but my wife is fearful. You hear fighter jets flying, you think it’s all over, you say goodbye to everyone in your thoughts. I hope the war doesn’t reach here, and everything ends where it started.

North Saltivka is not far from Belgorod [in Russia]. People we know from Russia are saying we’re making it all up. They are told that Ukrainians are fighting each other, while Russians only target strategic objects. You show them photographs of scorched buildings and dead people and they still say we’ve made it up. I’ve stopped talking to anyone from Russia because if they won’t believe their friend, then they can go on believing their politicians.»

– How has your team changed?

– «I try to stay in touch with everyone I was in touch with from Ukraine, from Kharkiv: my friends, my line cooks, and my chef. Most of them have left, gone to different places, some are still hiding in basements.

I have found a greater love for the Ukrainian people, and for Ukrainian unity. People are supporting each other at this difficult time.»

– What do you miss the most?

– «We attended the liturgy yesterday. My wife couldn’t take it, she cried. Most of all we miss our home. They [the Russians] have no right to deprive peaceful people of their homes. They have no right. But they’ve made that decision for those people…

We took such care; we did renovations. It’s hard to come to terms with the fact that it was all in vain, to fathom that the parks, the hospitals, the buildings are all gone. The entire infrastructure has been destroyed.»

– What were your plans prior to the full-scale invasion?

– «I was just starting to move on up in my career as a chef. People believed in me. We had grandiose plans – start baking pizza, then supervisory processes. One place, Feldman’s Eco Park – there’s not a shred of it left. Another place in the heart of the city, I don’t know what’s going on there. The war took everything from me.»

– Did you consider going to Europe?

– «I have a family to look after, my wife can’t be on her own. I could send them abroad. But she says to me, if we die, we die together. Hopefully we’ll be safe here.»

– «I understood I was powerless when I realized I had no thoughts in my head. I couldn’t think of a single thing to do. When there’s nothing you can do to affect the situation, that hurts the most. I am accustomed to dealing with problems, and here I couldn’t.

The scariest thing in Kharkiv was that we weren’t doctors and so we wouldn’t be able to provide emergency assistance to our children. So we came here primarily for the sake of our children and my wife.»

– What did you learn, having ended up in a nunnery?

– «The essence of these people, how kind they are here. Even family have not received me with such warmth. We’re very grateful to have ended up here.»

– What is your greatest desire now?

– «First of all, I want my family to be safe and want for nothing. Second, I want to find a job so I can support them.»

In conversation with Natalia Starepravo

Republished from UCU project Little stories of a Big War

Tweet
TAGS: stories of Ukrainians during the war, little stories of a big war