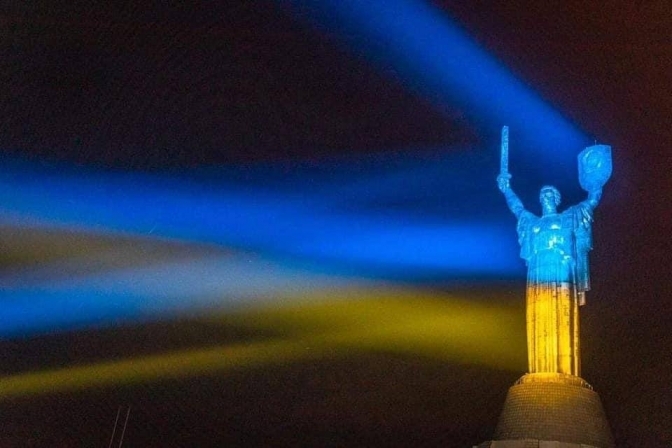 In the capital this night, the monument «Motherland» was highlighted in blue and yellow

UKRAINE: «Extremely important decision»: Zelensky said that Canada has removed all trade barriers for Ukraine for a year

President of Ukraine Volodymyr Zelensky said that it was currently impossible to unblock Mariupol by military means. The head of state explained that Ukraine does not yet have such heavy weapons that would allow it to unblock Mariupol.

Today, May 9, Ukraine celebrates the Day of Victory over Nazism, a Soviet holiday. Also today the war between Ukraine and Russia continues and it is a war of not two armies, it is a war of two worldviews. The President of Ukraine Volodymyr Zelensky said this in his video address.

WORLD: Canada will provide Ukraine with about $ 40 million in defense aid

«I felt the readiness of the world to help us»: Zelensky on participation in the video conference of G7 leaders

The Prime Minister of Japan said that the country would still impose an oil embargo against Russia. The country’s decision could have been influenced by pressure from the G7.

«Taking away the Ukrainian flag is an attack on anyone who is currently defending Europe,» Kuleba said of the incident in Berlin, where police took away a giant Ukrainian flag.

The Prime Minister of Ukraine Denis Shmygal and the Prime Minister of Croatia Andrei Plenkovich discussed cooperation in the framework of the International Criminal Court’s investigation into the crimes of the Russian military in Ukraine and the provision of technical assistance in demining Ukrainian territories.

Today, May 9, Russian President Vladimir Putin delivered a speech at a Victory Day parade in Moscow’s Red Square, saying Russia had «given a precaution against NATO aggression» when it invaded Ukraine.

«God, save Daddy!»: Children of Mariupol defenders recorded a video address to Ukrainians and the world

Children of Mariupol defenders recorded a video appeal to the Ukrainian authorities and the international community, including Turkish President Recep Tayyip Erdogan, to help rescue Ukrainian fighters from a city blocked by the Russian occupiers.

The Ukrainian military continues to heroically defend Mariupol while under blockade at Azovstal.

The video was published by the founder and first commander of the Azov Regiment Andriy Biletsky.

«Look into the eyes of these children. Their parents are now on Azovstal. The children’s dream is one – for my father to return from the war!» – he signed the video.

Important for the weekend: US First Lady Jill Biden arrived in Ukraine and met with Olena Zelenska, the First Lady of Ukraine, in the latter’s first public visit since the beginning of the war. Jill Biden and Olena Zelenska visited a school in Uzhhorod, where they resettled internally displaced persons from those regions of Ukraine where hostilities continue

Jill Biden on meeting with Ukrainians: «Their strength and resilience inspire the world» 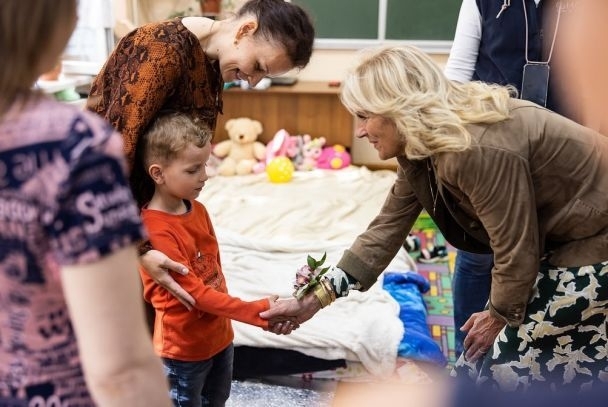 Svyatoslav Palamar, Deputy Commander of the Azov Regiment, commented on the current situation at Azovstal. He told what was happening at the plant during the night of May 7-8 and what had happened there during the previous three days.

«Intensive shelling of the Azovstal plant is underway. There were more than 25 sorties during the night alone. Including three strategic bombers. Barrel artillery is working, tanks and mortars are working.»

He also added that civilians had been evacuated from the Azovstal plant over the past three days.

We can’t say for sure whether all civilians were evacuated. No international organization or government structure, our politicians did not come here – to the territory of Azovstal. There is no special equipment to dismantle all the debris. «The vast majority of the words ‘we succeeded’, ‘we did everything’ and so on. I emphasize that just two days ago, during the so-called regime of silence, three of our servicemen were killed,» Palamar said.

Find out more at the link:

At night, the Russians fired on Novomykhailivka, Avdiivka, Marinka, and settlements of the Ocheretyn community. Currently, there is information about one wounded civilian in Novomykhailivka. Difficult situation in Lyman and Sviatohorsk communities. On May 8, 173 people (from the city and its suburbs) were rescued in Mariupol.

The night passed quietly. At around 6 pm on May 8, during an air strike, the Russians destroyed the largest and oldest Jewish cemetery in the Hlukhiv community.

As a result of heavy shelling in Severodonetsk, Lysychansk, Shipilove village, 5 objects were damaged: residential buildings, outbuildings, a prayer house in the village of Shipilove. As a result of the shelling, 3 people were killed (including two volunteers from Transcarpathia), 3 more were injured. At night, the occupiers fired on Lysychansk. Details and consequences are being clarified.

Late in the evening, the occupiers fired on the Zelenodolsk community. Several streets in one of the villages were left without light. People were not injured. Details are being clarified.

The night passed quietly, but on May 8, at about 5 pm, the Russians fired mortars at the outskirts of the villages of the Horodnia community near the state border. There are no previous victims.

At night, air raids were constantly announced. According to preliminary information, Shirokivska and Snihurivska communities were shelled during the day. There are no victims. Damage too. Most of the shelling was outside the settlements.

On May 8, there were several rocket attacks, mostly involving aircraft. 6 missiles destroyed air defense forces. The missile strike in the region damaged the power substation and gas pipeline in the Artsyz community, destroyed several private houses and damaged recreation areas in Odesa. There are victims. Detailed information is being clarified.

The Russian military and local collaborators were actively preparing for the May 9 celebrations. In all major cities, the occupiers hung billboards and city lights with Soviet symbols and a call to join the «Immortal Regiment» and the «Hundred Gram» battle.

In Kherson itself, invaders set up a stage and photos of Soviet times on Freedom Square. There is information that the Russians are importing actors from Simferopol and the so-called «DPR».

In the afternoon of May 8, the Russians fired several times from the MLRS on the outskirts of the city, no one was injured. In Kharkiv district, two people were injured and one died. During the day, active shelling of Bohodukhiv and districts continued: 4 wounded, 3 dead. In the evening of May 8, shelling of the occupiers was recorded in Lozova and Zolochiv districts: 2 wounded. Fighting continues in the Izyum region.