«Singing Against the Darkness»: How Ukrainians Keep Christmas. Video

16:36 13 January 2022
Tweet
344 0
Feasting, singing, drinking–and no time for arguments: Such is Christmas in Ukraine, not so far from what we read about in Dickens stories. 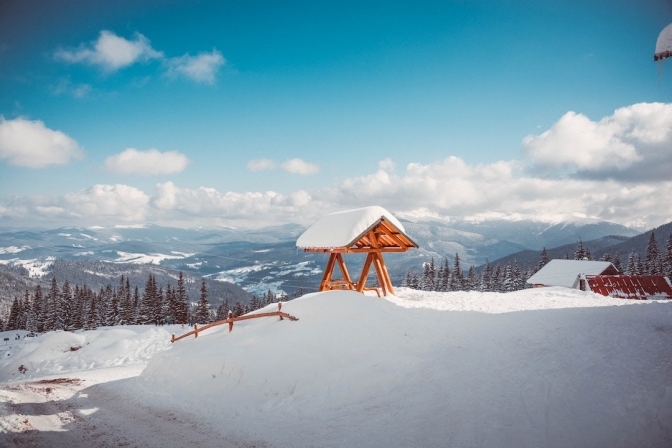 Photo by Alexandra Luniel on Unsplash

Stryi – Suddenly everyone in the flat, the whole family, was bustling about doing things: something was afoot. With my bag packed and recovery coffee in hand, I’d been talking about the ongoing strangeness of these pandemic times with my friend Andrew. What motivates humans, how do we find happiness amid the darkness and craziness: a good beginning of year, making-sense-of-life talk. Within the hour, I had a train to catch from this small city of Soviet towers, where I’d spent Christmas Eve, 7 January on the eastern-calendar, back to Lviv for a Christmas Day dinner.

But then as with all conversations during Ukrainian Christmas, it was halted by music: some friends swept into the flat’s entry hall with instruments, including a double bass. My hosts, with accordion, flute, violin, tambourine, etc, began to play one of the vibrant, polyphonic Ukrainian carols, which seem to loop around and around and over and over. Then, lo, in the doorway, I saw great old friends, Natalia and Yura and young daughter, from Lviv, who had driven down to surprise us. Genuinely, everyone was smiling: just happy to be living well in the moment.

Within minutes, Natalia, the hostess almost magically, arranged a table full with the traditional and fantastic food of the season: kutiya, the buckwheat poppyseed pudding; varenyky; a ginger-carol-cheese salad; ham; the digestive dip of beet and horseradish; holubtsi, stuffed cabbage rolls with mushroom sauce; caviar on bread and butter; and more. We were all drinking wine and samohonka, which is Ukrainian moonshine, of various sorts, distilled with herbs and nuts. The host, Taras, gave me some stranger stuff: a smoothie-like spirit made of nettles.

Picking at the wide assortment of food upon the table, we talked–except every five minute or so, like in some kind of musical, all broke out into song.

I had plans in Lviv that night, another Christmas dinner, but I did not make the train.

«We’ll call your friends in Lviv and say the Russians got you.»

«Plus we are going to Ihor and Anastasia’s house later.»

Such is Christmas in Ukraine: not so far from what we read about in Dickens stories. These days of Christmas are a repetition of joy, in the days, in the hours; days of traveling through the snow between towns and villages to visit friends.

Serhii, bass player, picked up Taras’s accordion and began to play Ukraine’s most world famous carol, the «Shchedryk,» known otherwise as the «Carol of the Bells.» Yura and Natalka’s little girl sitting next to Serhii then began to play the tune on keys of the same accordion, while he pressed the buttons and moved the bellows. Others sang along quietly but mainly all attention was rapt on the scene.

Soon, in the dark, we were bundled up in coats and driving to the village of Dasahava, to the home of the parents of our friend, Ihor, one of the best drummers in the land. We got out of the cars, the musicians, most of our crew, grabbed their instruments and we entered the two-story country house’s vestibule with a gusto of singing and playing. The denizens of the house, all ages, began to emerge and dance along and soon, with all still singing, the host and hostess ushered us into the main room, set up for a feast, and within moments all the little glasses were will filled with samohonka for the men and the big glasses with red wine for the women.

We ate, drank, toasted – repeat. When the spirits began to falster, the hostess, Anastasia, also one of the land’s great keyboardists, brought out restorative cups of white beet soup for everyone and the gusto was renewed.

«For God, for love, for friendship!» said Ihor, in Ukrainian. And all raised their glasses. And immediately Ihor filled the glasses again.

In between toasting and singing, conversation would break out. At one point, we began to discuss the satirical Netflix film Don’t Look Up. Most liked it. I didn’t. I began to argue a little why I didn’t like it. In America on a holiday this could easily turn into something unpleasant, but in Ukraine: nope, time to sing again. Silence your arguments, your angst, your stress: sign, toast, drink, live!

The exit or Ukrainian goodbye is a long process. Around the table, now with all standing, those gathered sang in an inspiring, artistic round, the traditional celebratory song, «Mnohaya Lita,» literally «many summers» in old Slavonic, but which means generally «many years.» Then in the vestibule as we put on shoes and coats and the singing began again. And outside in the cold, well why not two more songs. And the grandma came out in her coat and the Ihor retrieved his drum: and another song.

Later, as we left another house during the time stoppage of Christmas Day in Ukraine, walking down a snowy path to the cars, Serhii plucked a jazzy tune on the bass, Andrew played the flute, and the little girl shook the tambourine, while we followed: a midwinter funky jazz trio amid the foggy white frozen scene. The contrasts: the giant bass, the little girl, the jazz amid the frozen landscape, made it seem like a dream or the Bremen Town Musicians.

Driving in a convoy back to the city of Stryi from that small village late Christmas night, we passed a few verteps near the village: groups of kids and teenagers dressed like animals, peasants, kings, queens, devils, and Nativity characters. We stopped the cars each time, got out to listen to them sing and recite I think a passage from Luke, and gave them money before returning to the road.

The road straightened ahead of us through the Galician fields. Five of us in a car, following friends ahead: straight road, flat though the fields, before us a crescent moon against the cold clear sky. All others in the car started singing a folk song, non-Christmas. The machine sped along the road toward that moon. Where in time and space were we? Where were we going?

We will all fade but that night seemed to have created something indelible: singing against the darkness til we forgot the darkness.

Throughout the day I’d had a shaky feeling 2022 is gonna be the weirdest one of the pandemic. But somewhere in that moment, in the Galician plains of Ukraine, I found a timeless moment: the toasting, the singing, the laughter–hardly a full conversation, but instead real connection, solidarity: a moment that gave imagination, strength, calm for the road ahead, the year ahead.