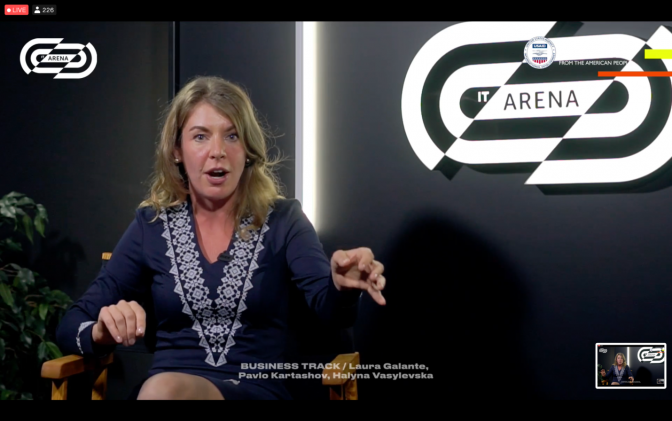 Screenshot from IT Arena digital event

Thursday 7 October – Laura Galante, an American cybersecurity and cyberwarfare expert with significant experience in Ukraine, led the first Business track panel, «Cybersecurity in the ‘20s,» on the first day of the eighth annual Lviv conference IT Arena, occuring in a hybrid virtual-in-person format. After describing recent cyberattacks, she proposed three attitudes that could help companies better respond to what she called «The next ten yeas of terrifyingly existential cyber threats.»

The founder of Galante Strategies, Galante is a senior fellow in the Atlantic Council’s Eurasia Center, and previously directed global intelligence at cybersecurity firm FireEye, where her teams uncovered Russian and Chinese military operations, among other things.

«If you don’t want to play by the rules and you see yourself the victim of people who play by the rules,» Galante said, you can use the internet to get your way. This, she said, is the attitude of the regimes in Russia, China, and North Korea, including Russian attempts to influence American democracy and the Russian attack on the Ukrainian power grid.

How can those who play by the rules respond to these threats? The answer, she said, is not to try to be stronger or go on the offensive.

What does this mean in practice? She offered three ideas:

1. «Build relationships.»: Develop real-world connections to people whom you can call on when something goes wrong. This means being able to speak privately, on What’s App or Telegram messages, say, or in person.

2 «Resilience can look like humility.»: «We have to humble info about the tech we depend on, to diversify.» Galante cited the recent Facebook outage which included What’s App, Messenger, and Instagram. Facebook had their entire corporate assets–including how doors open – attached to a single domain. Not resilient.

3 «Give the edge of your organization power. Put power on the edge of what you do.» Remember that the key people who might find, solve, or mitigate your next security threat might be three degrees from the work you do. Consider your supply chain, even the person who cleans your office. Your assets far from the traditional idea of power could be the strongest.

During a panel discussion after her talk, she also sad, «Technical skills... there is no shortage [of that] in Ukraine.»

A member of the Council on Foreign Relations, Galante holds a B.A. from the University of Virginia and a J.D. from the Catholic University of America. She speaks English, Italian, Spanish, and Bulgarian. You can learn more at her firm’s website. You can find her on LinkedIn.

During the first two days, October 7-8, there will be exclusively online lectures within four categories: Business, Product, Technology and Startup.

On Friday 8 October, the exclusive meeting with Maye Musk a nutritionist, model, and mother of SpaceX and Tesla founder Elon Musk will be streamed on the IT Arena web platform.

The last day of the conference, Saturday 9 October, is devoted to in-person networking, so the meetups will take place offline in fourteen locations in the city centre, such as Mad’s Bar House and the Leopolis Hotel. The price of the tickets starts from $59 for a Standard, $199 for Senior, and $399 for Executive.

Note, that only the last two provide participants with access to the Afterparty taking place in Venue MAD bar’s house on Friday, 8 pm. Additionally there is a special networking session for executive ticket holders at the same place and time.

You can buy tickets and learn more at the IT Arena website.

Follow Lviv Now’s Wealth and Democracy page for reports on the panels and discussions. Topics include «Think Quick: Architecture for Real Decision-Making,» «User Obsession,» «Transforming Your Business with Machine Learning,» and «Ten Things We Learned from Running Production Infrastructure at Google.»