«We united and resumed teaching.» The stories of Ukrainian educators who evacuated from the warzone

18:45 29 November 2022
Tweet
289 0
These three teachers fled to Lviv from the south of Ukraine when the war began and their settlements fell under Russian occupation. We asked them about the evacuation, settling on a new place and working for both their natives and the Lviv pupils. 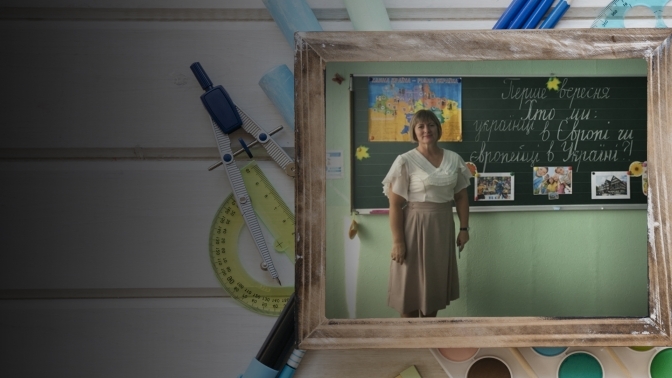 Lyudmyla Klochkova, a teacher of Ukrainian language and literature, moved to Lviv with her husband, a geography teacher. Lyudmyla and Mykhailo worked for many years at the lyceum in Tomyna Balka, a village located in the Kherson region. On September 1, they got a job at Lviv School №65. While working here part-time, the couple continues their main teaching in the Kherson region, working with the natives remotely in the afternoon. 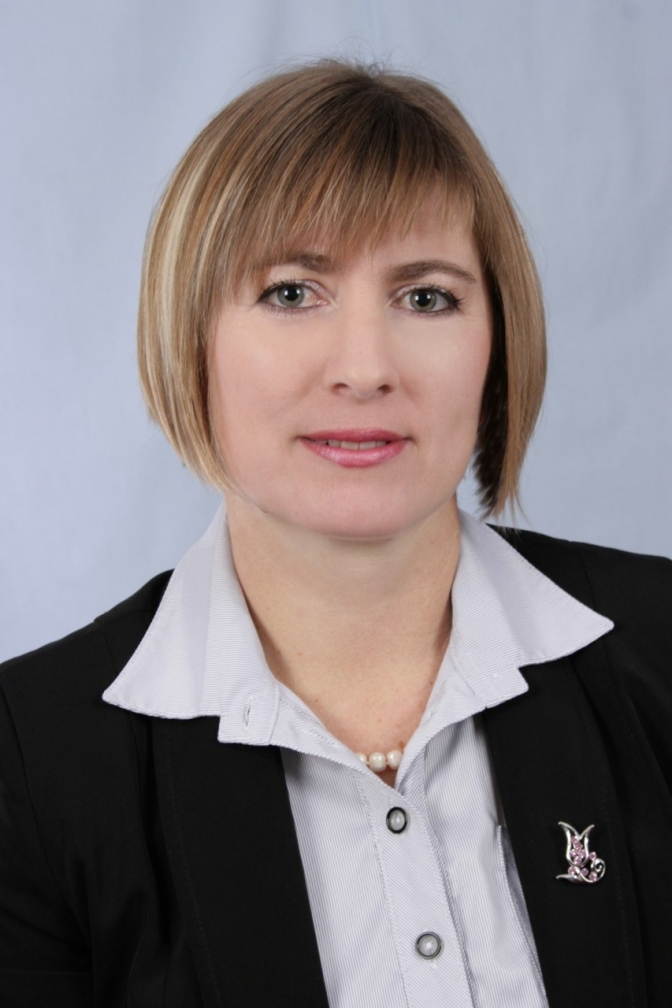 Russian troops entered Tomyna Balka on March 5. The headmistress of the school where the couple worked turned out to be a collaborator. The Russians opened their school in the lyceums’ premises. Only three people supported the director, and the rest refused to cooperate, even those who didn’t leave. The headmistress took out all Ukrainian textbooks from the school and brought in Russian ones. Women who called themselves the «Union of Russian Mothers» came there, convincing that Kherson has now become Russia.

Instead, other teachers rallied and did not stop the online studying process.

«We revived the lyceum ourselves, united about 75 per cent of the children. Pupils from other villages, schools, and districts, as well as those who went abroad, joined us. For almost a month, they put everyone in order, looked for teachers whose positions were vacant, and finally managed to resume studies. Now, we have children from the second to the 11th grade, the first grade wasn’t enrolled,» – the teacher says. Instead, the Russian school did not last long – only three days. Events began to unfold in such a way that there was no mention of studying. The headmistress ran away from the village.

«We don’t know where all our Ukrainian literature is. We do not know what happened to the school building. Locals say that the physics teacher took the keys [to the building], assured that it’s Ukrainian and said that he would not give the keys to anyone.» 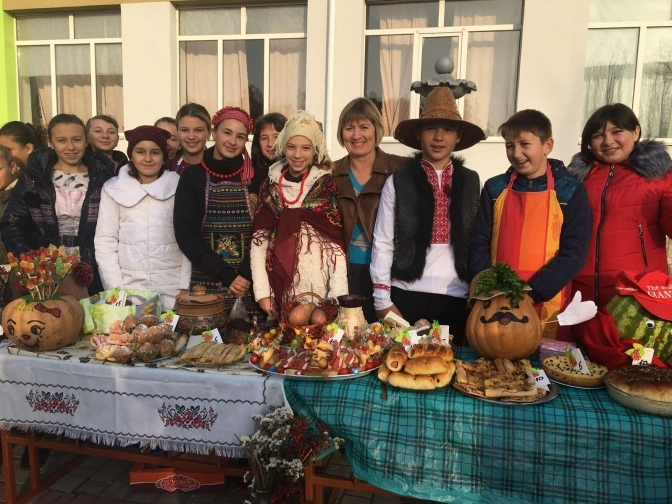 The couple quickly found jobs in Lviv. They sent their CVs to the Lviv Education Department and received a referral the same day.

«We were accepted as family. The school is big, there are about 140 teachers, while our school had only 23. We managed to agree on the hours and number of lessons quickly. They offered us even more than we expected,» – Lyudmyla Klochkova continues, mentioning her 34 years of teaching experience.

The teacher says she is already used to working in two schools, but pretty worried about the children from the Kherson region, especially when someone of them does not come to an online lesson: «I see that the war has changed these children – it has made them adults.»

The woman says that in their school, subjects were taught only in Ukrainian. The majority of the residents communicated not so much in Russian as in surzhyk [mix of Ukrainian and Russian]. Her family is Ukrainian-speaking, so the teacher instilled the love for the native language in her students in almost every lesson.

Read also: «Wars begin due to the lack of nurture,» – Solomiya Chubai 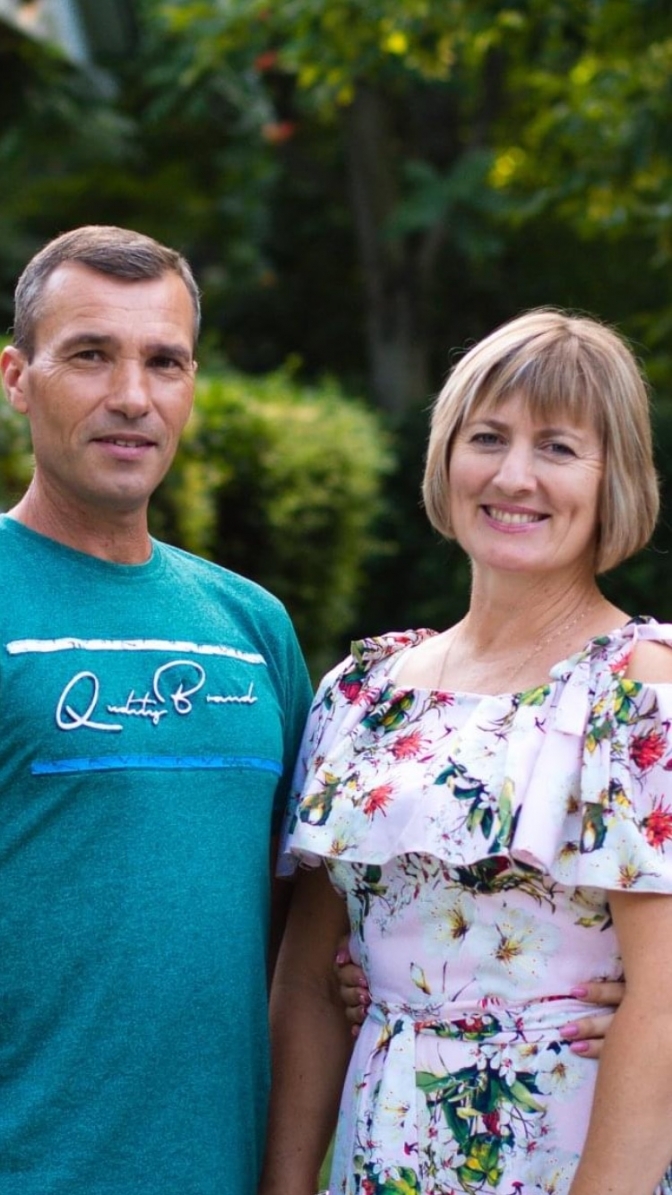 «I always tell them that Ukrainian should not only be learned, but also loved, because it is our native language!» – she emphasizes. 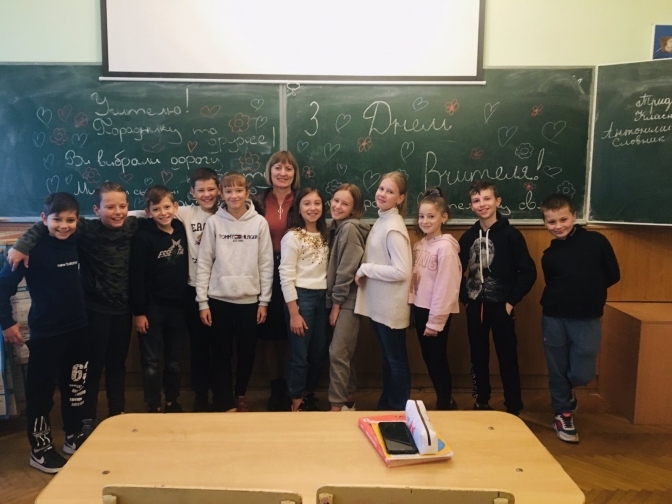 The village where the couple lived and worked has already been liberated from the occupiers. Now, there are ongoing filtering measures [actions of the Ukrainian security forces to indicate collaborators].

«We know that Ukrainian soldiers entered our village, and since our territory is in a 15-kilometer zone, everyone was warned about possible shelling. It’s not a time to go there. Although it’s very good in Lviv, our home is the Kherson region. So when it becomes calmer there, we plan to return,» – the interlocutor adds.

This is why we came here

Hanna Skydan, a 40-year-old English teacher, works remotely at the school in Tokmak, the city in the Zaporizhzhia region, and in the usual, offline mode – at the Lyceum «Oriana» in Lviv.

The woman arrived in Lviv with her husband and two sons on March 30. Her mother is a native of the Lviv region, so the family frequently came here earlier – sometimes two or three times a year. Two years ago, the teacher visited here with her ninth-graders. This trip was organised instead of a graduation celebration.

Read also: «This war exposes the truth about ourselves,» – Canadian volunteer Ustia Stefanchuk 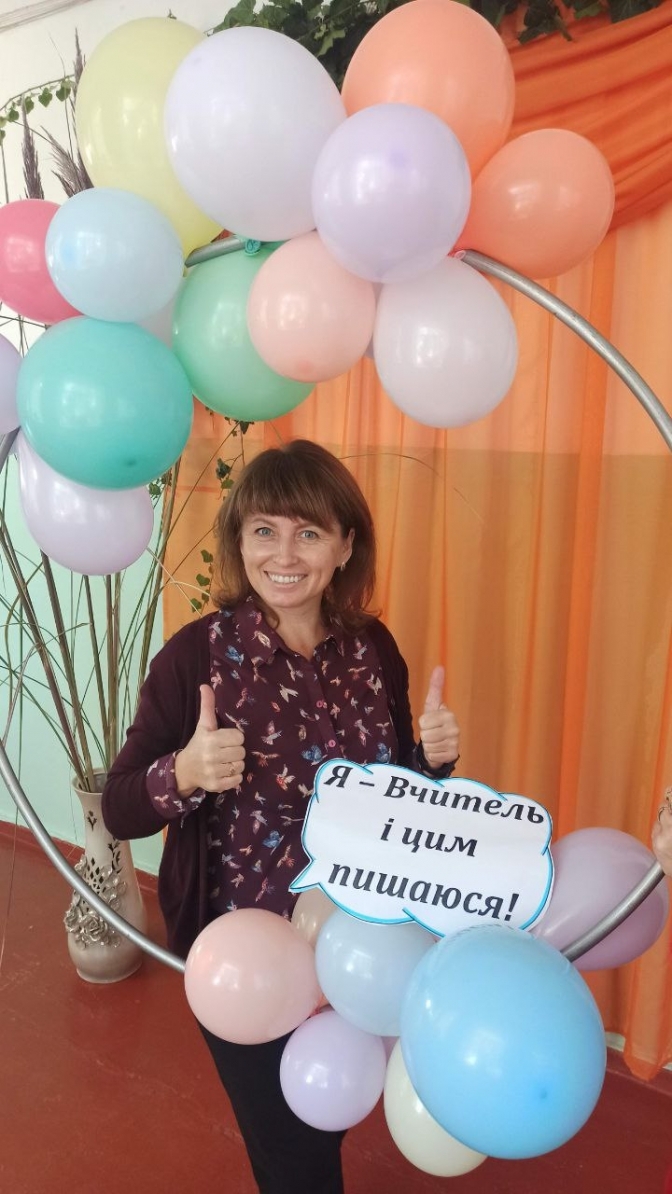 The city where Hanna Skydan lived, 20 kilometers from the front line, is still under occupation. Russians took the keys to the school from its manager, but the building is empty. Part of the teaching staff, as well as the students, escaped and ended up in different cities and countries of the world. Despite this, schoolchildren started their studies on September 1. Teachers have prepared and started conducting lessons online. Children from other schools, from abroad, and some of those who stayed in the city also join. Obviously, they do this secretly from the Russians, so that not to be revealed and punished. Since the territory is occupied, teachers are not paid, but they still work. 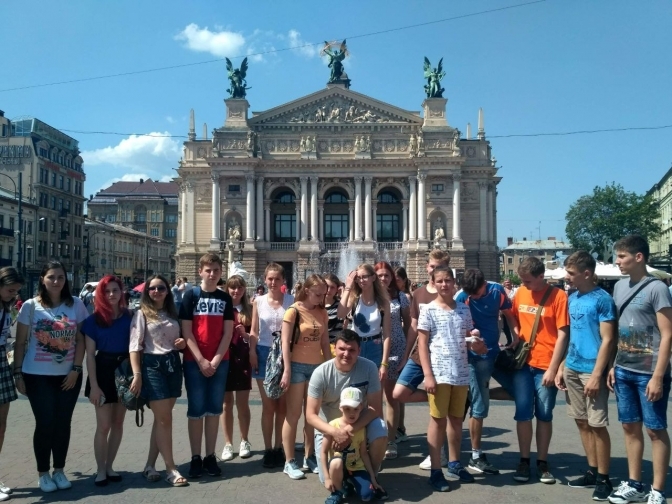 When the war started, the Skydan family decided to go to Lviv. They came to stay at the house of the woman’s aunt in Sykhiv. The children were immediately enrolled in the nearest educational institution, Lyceum «Oriana». The eldest son studies in the 11th grade and does not plan to leave Lviv, while the youngest one, a 7-grader, still hopes to return home. The husband went to serve in the Ukrainian army, and the woman first volunteered at the Lviv centre «Care in Action». Later, she began to look for job according to her profile.

At the beginning of October, Hanna saw an announcement on the Facebook page of the Lyceum, where a part-time English teacher was needed. Already on October 10, she started her first working day.

Currently, the woman manages to combine teaching in two schools. In the Lviv Lyceum, she teaches English in the second, fourth and fifth grades, while in the Tokmak school – in the first, fifth, ninth, and eleventh.

The teacher says that Lviv students quite often ask where she is from, why she moved, whether she saw a real war, with the flying missiles, shootings and killings. They also ask more painful questions: 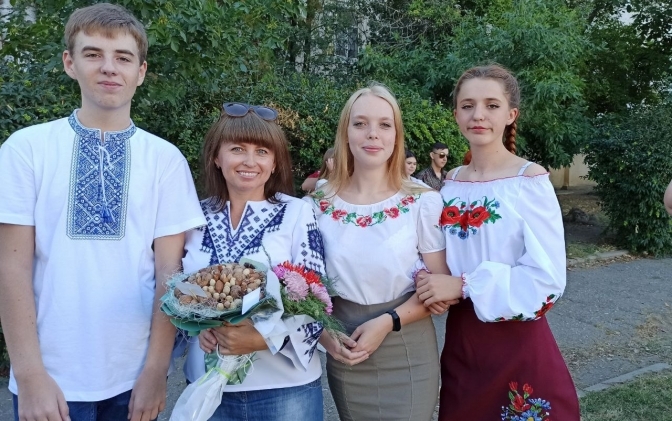 «Recently, in one of the lessons, a student asked me why we came here, why people arrive saying that everyone is in a dept to them. I had to explain using the example of my family: we were forced to move, my children study at a Lviv school, my husband protects Ukraine from invaders, and I do not demand anything from anyone. On the contrary, I found a job in my field and am working. After that, there were no more questions.»

By the way, the woman has excellent Ukrainian. She says it’s logical because it’s her native language. Until 2014, only Russian was spoken in Tokmak, and even a certain amount of hours was allocated for it in school. After the Revolution of Dignity, however, Ukrainian could be heard much more often.

«Teachers conducted lessons in schools only in Ukrainian, but during breaks, you could mostly hear surzhyk,» – she claims.

It’s great when you are proud of being Ukrainian

Valentyn Nechepelskyi, a 59-year-old math teacher, and his wife, a teacher of biology, fled the war to Lviv as well. Before that, the couple lived and worked in the village of Nova Mayachka in the Kherson region. Since 2004, Valentyn had been teaching mathematics at the school there, and since the current school year – at the one in Lviv. Now, he works at the city’s secondary school №7, and his wife works at the «European» Lyceum.

The teacher says that even before the war, he agreed with his wife that if the Russians came, they would leave immediately. So when on February 24, the explosions started and the tanks moved, the couple packed their items in 10 minutes, got into the car with the wife’s mother, brother and nephew, and decided to cross the front line. 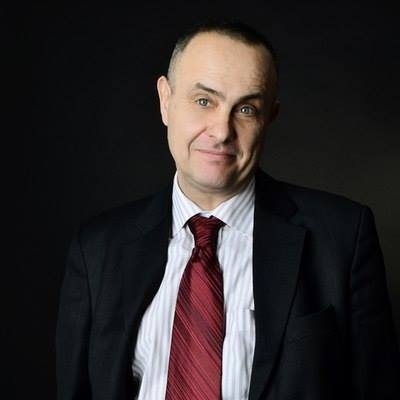 «We were following the Russian convoy. Later, they took a turn to Nova Kakhovka, and we went to Antonivsky bridge. There were a lot of cars coming towards us, we were the only ones going in the opposite direction. That’s when we realized that Russian troops had entered,» – he recalls.

After driving to the Antonivskyi bridge, they saw how quickly Russian paratroopers were descending on ropes, how the occupiers were burning documents near the traffic police station, and a driver nearby was kneeling and asking to let the car pass.

Two more cars were driving in front of Valentyn’s one. They were stopped, but suddenly, the paratroopers started to leave.

«The Russians were distracted by something. The first two cars started their engines and sped off, we followed them. Although we were driving very fast, I saw in the rearview mirror how the machine guns were aiming at us. I pushed gas as hard as I could, and the helicopter was also chasing us. But they didn’t catch up with us for a long time... We miraculously escaped,» – Valentyn Nechepelskyi continues.

A few hours later, when he called an acquaintance to warn that the bridge was dangerous, the latter said that heavy fighting was already taking place there. It turned out that at the time when they saw the Russians, those were gathering people and forming a human shield from them. 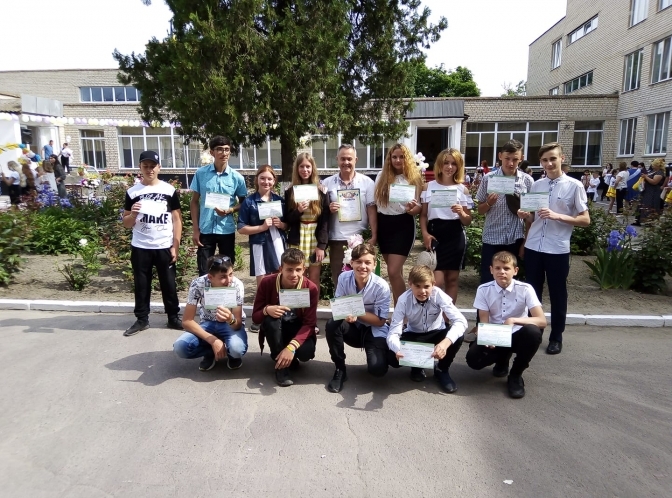 Arriving in Lviv at night, the family immediately turned to the point for displaced persons. At first, they were accommodated in a school, and then rented an apartment.

In Lviv, a mathematics teacher called various schools, asking if there were any vacancies. He was offered a job at school №7.

The man admits that there were collaborators among the teachers at the Nova Mayachka school who later helped to open a Russian one there. The headmistress was not invited, because she stood for Ukraine. However, this school worked for «as many as» 10 days. And when the Kherson region started to be liberated by the Armed Forces, the occupiers evacuated teachers to Crimea, many were taken to Russia.

«We were received well and with understanding in Lviv. No one said a bad word. We are on our land, we are one people. My wife and I feel that the longer we stay here, the more we grow roots in this land. But everything rests on housing... We still don’t know how we will live further, and where,» – he explains.

So even when the situation in Nova Mayachka improves, when all the Russians are kicked out, Nechepelskyi’s family still don’t know whether they will return there.

«I like the patriotism of Lviv schoolchildren, which is manifested in their thoughts, words, behavior, and attitude towards others. Children in Lviv treat their native language with great respect and love from an early age, they cherish it. And even when I accidentally mention Russian words in class, they immediately correct me. It’s great when you are proud of being Ukrainian and speak your native language!» – he emphasizes.

Photo from the archive of Lyudmyla Klochkova, Hanna Skydan and Valentyn Nechepelskyi