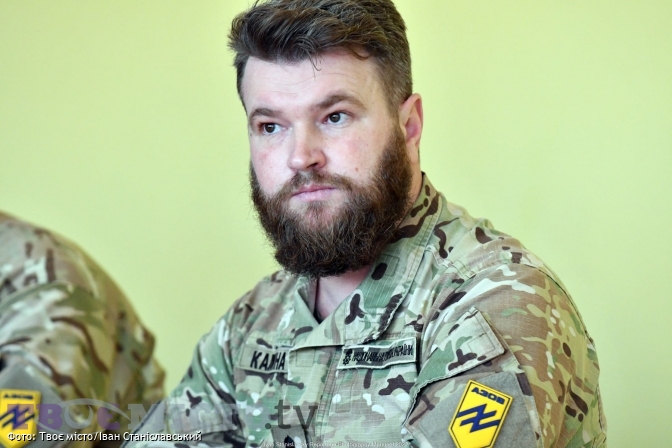 «Who if not me, mom?» Interview with the mother of Azov fighter «Kalyna»

Tweet
2049 0
The guys made of steel. Now, everyone knows the names of the «Azov Regiment» leaders who defended Azovstal. These are «Redis» (Denys Prokopenko), and his deputy, «Friend Kalyna» (Svyatoslav Palamar). From the besieged and shelled plant, they repeatedly called on the world to stop the genocide in Mariupol. Sviatoslav Palamar «Kalyna» comes from the town of Mykolayiv in the Lviv region [not the one in the South of Ukraine]. We spoke with his mother, Lidiya Palamar, about their family, the Revolution of Dignity, Svyatoslav’s service in the army and «Azov», helping the residents of Mariupol and reports from the blocked plant.

About the family and childhood of «Kalyna»

Being born in the small western Ukrainian town of Novyi Rozdil, Sviatoslav spent his childhood in Mykolaiv, another town in the Lviv region, where his family moved in 1993. His mother says that she worked a little with her husband abroad to earn a living and to educate their children, frequently leaving Sviatoslav and his older brother, Volodymyr, with their grandparents.

This way, the children grew up athletic and erudite because the grandparents worked in schools for almost half a century – 46-47 years of continuous experience. Grandfather was first a physical education teacher, then started teaching biology. The grandmother taught biology in elementary school. Sviatoslav and his brother studied well and grew up patriots of Ukraine. Grandmother and great-grandmother told them about all the events that took place in Ukraine at that time, having instilled in them a love for the Ukrainian people.

Sviatoslav’s mother recalls how they established their life after finally coming back to Ukraine. «When we returned from abroad, we started our own small business, being both founders, accountants and shippers. The children helped us. The eldest son, Volodymyr, had previously gone to Montenegro. He has three children, the eldest son went to university there, so they set up business abroad.»

Sviatoslav is a very positive person. He is creative, loves life and nature. He travelled everywhere: the Carpathians, the East, the West. As soon as he had a free minute, he went to the Dnieper, Kherson region, Zaporizhzhia – all this interested him. The future fighter, he loved to read philosophical and historical books, learned about the lives of Churchill and Roosevelt. 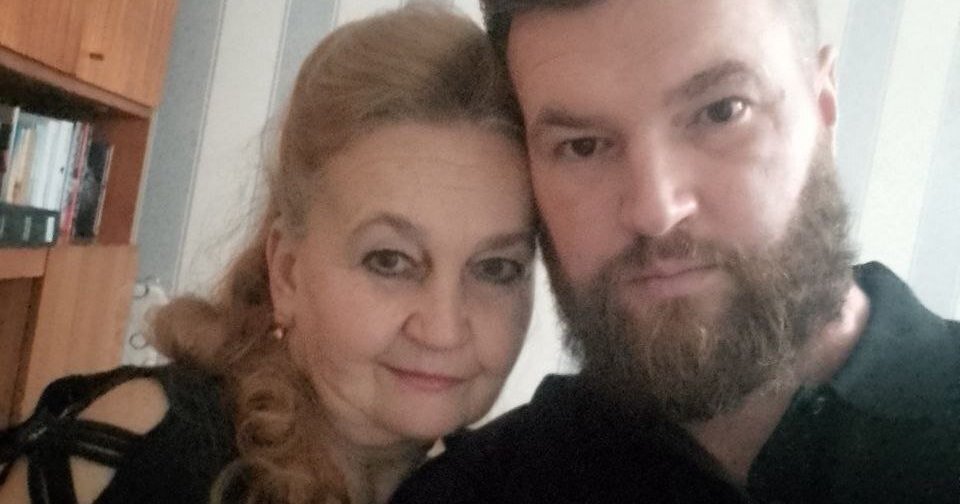 Sviatoslav Palamar «Friend of Kalyna» with his mother, Mrs. Lidiya

The sociable fighter and have made a good network of friends. Together with a friend of his childhood, he studied at the Lviv Commercial Academy. «His friends support us even now: Andriyko, Ivanko, Vasylko. They are grown up, married, have families, but still keep in touch with us. Childhood friends have not yet gone to the front. Probably, now there are more people with whom he passed the Maidan.

It is important for him to be close to his friends and to experience the main moments with his own eyes. As soon as his friend got married in the Caucasus, he immediately went there because he wanted to see how Georgians and Crimean Tatars perform weddings. Everything is very interesting for him. He has many friends from Georgia after 2014 and dreams to visit Georgia again,» – Lidia says

About the Revolution of Dignity

When Sviatoslav graduated from the Lviv Commercial Academy, his parents put him in charge of their small business, as they were already old. «When my son heard about the Revolution, the Maidan, he didn’t even tell us. Took his backpack and left, because he knew what we would be going through. Then, he called: «Don’t worry, I’m on the Maidan, I have to be there, because my vocation is to defend our Ukraine,» – she recalls.

On the Maidan, he belonged to a Cossack cell. He talked to his oarents a little about these difficult topics and did not want to unnerve them, knowing that they were already worried about him. Sviatoslav said: «Mom, I’m single, who if not me? I understand that Volodya will not leave, he has a child, a family. I don’t have it yet. It’s not scary. We need to defend ourselves.»

«This is his calling. There is nothing that we can do about it. He found himself in the first period. There were many of his brothers. He did not call us. We actually watched everything on TV, but helped as much as we could,» – the mother says.

About service in the army

Sviatoslav has many interests, in particular sports and hunting. He was a little afraid of heights, so had to jump and harden himself. He was engaged in combat hopak [the martial art], even performed for the Academy. 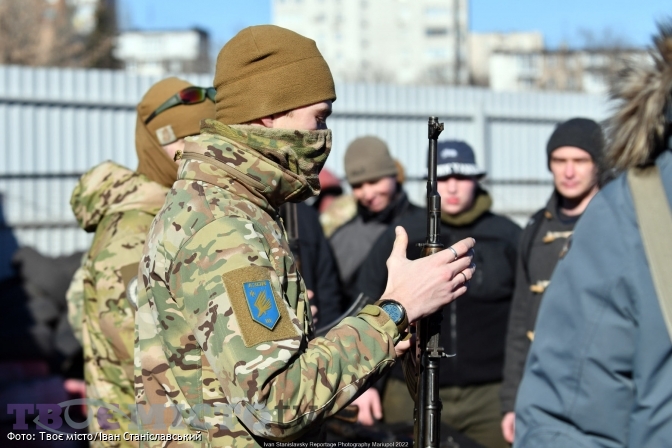 «At first, we did not want him to be a soldier, to send the child to the barracks. But he proved something else to us, took an academic leave to join the army. He said: «Mom, I want to see the army, I want as far as possible.» «Sviatoslav, you can serve in Lviv!» – I said. But he wanted to go further.»

Sviatoslav has been at the front since 2014 after Maidan. From the Maidan, he immediately went to Azov. «I know that my son liberated Shyrokine, Popasna, and Mariupol. He was everywhere, although, of course, he did not tell us. When calling us, he said: «Everything is fine. All right. That’s OK». He always reassured us,» – Lidia said. 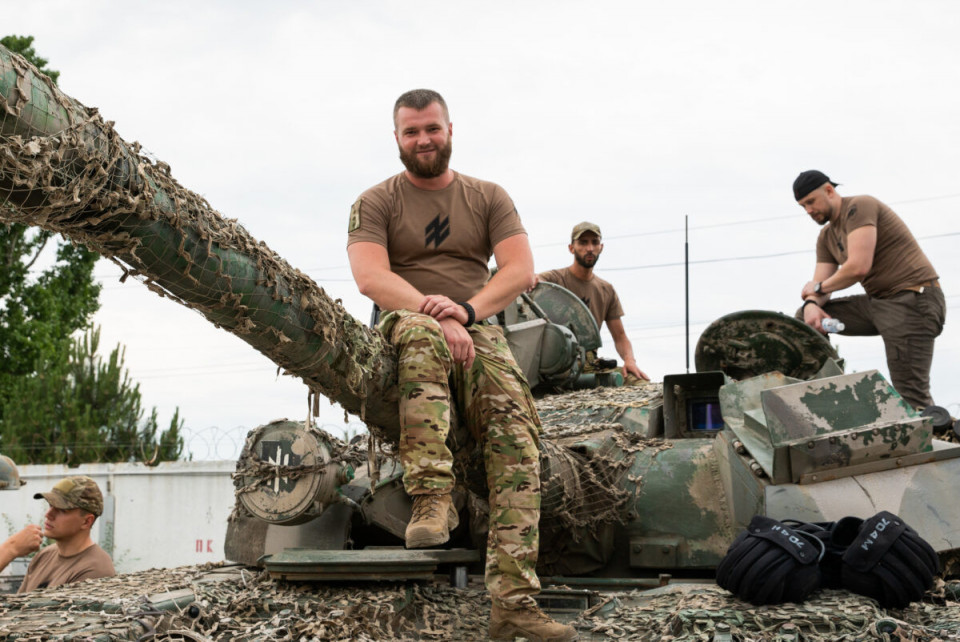 At first, her son was a machine gunner, a senior sergeant, because he did not have a complete military education. So he left the army as a senior sergeant. In 2020, a newspaper was published about him, and from there, the parents read where he was.

In Mariupol, Sviatoslav saved children and people, because the population was really in danger there. The civilian population found refuge at Azovstal and found it very difficult. The military knew they had to protect them, it was their duty to keep them alive. It was grievously to endure. 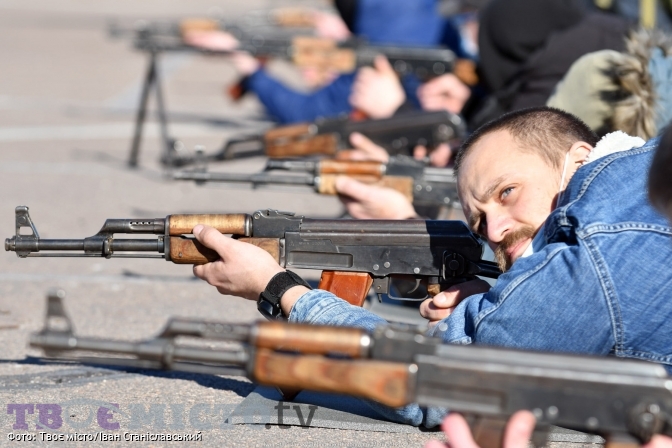 «We have seen a lot of feedback that the situation there is particularly difficult, because the women of Azov and Marines wrote that they had neither food nor water. It’s very difficult to survive. To read that they were kept there for 86 days in such inhumane conditions. In fact, we are worried for everyone, not only for him, because there are a lot of brothers have died. Whole families. And this wound is probably in his heart from all this, because since 2014, they went through it all together: trained, read, lived together, made friends. I think they are all heroes. It’s unbelievable to endure all this.» 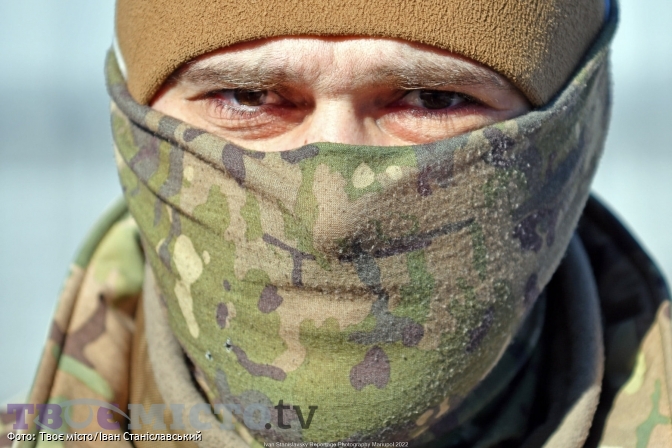 The way to became a deputy commander

From the very beginning, their regiment was created by Andrii Biletskyi. Later, they joined the brigade. First a battalion, a regiment, and then a brigade. They expanded and had many directions, led, in particular, from Kyiv. Sviatoslav often went on business trips there, so he was appointed commander. Some were engaged in information, some in combat training. He was the right hand of our commander. 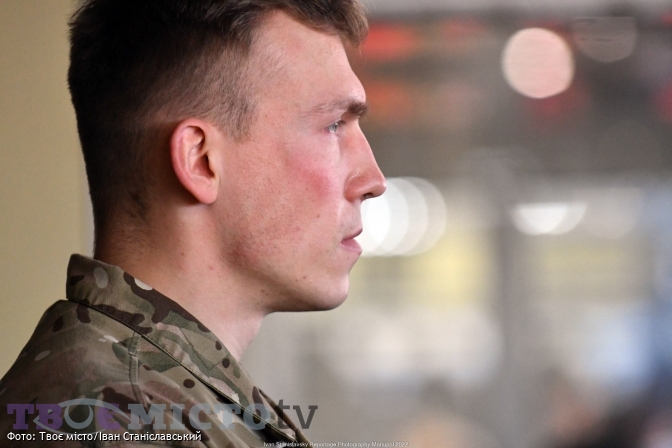 Commander of the Azov Regiment, Denys Prokopenko, nicknamed «Redis», at the training of the regiment for civilians in Mariupol, February 13, 2022

«Redis», Denys Prokopenko, came – a young boy, but established discipline, supported the guys, tried to make them athletic, to have excitement. They treated their fallen comrades with great respect. I think that a commander is a good man, and Sviatoslav works very clearly with him and that is very good.» – the mother adds. 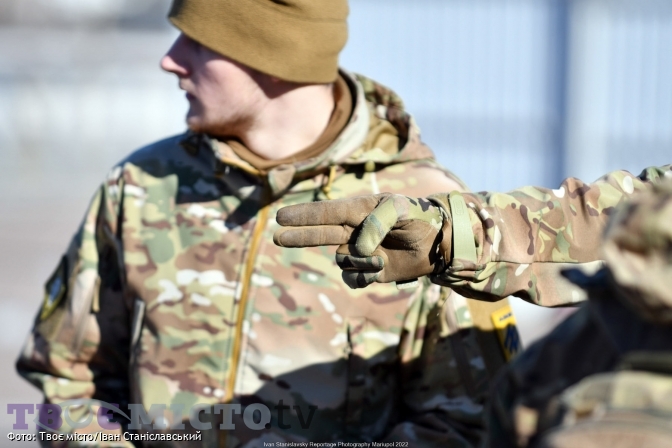 These are very strong-minded guys, educated, good and such positive patriots of their country. At first, they did not advertise, lived their lives, did their job. The boys were trained and grew up in that military environment. It was his calling, he didn’t want to be anyone else. 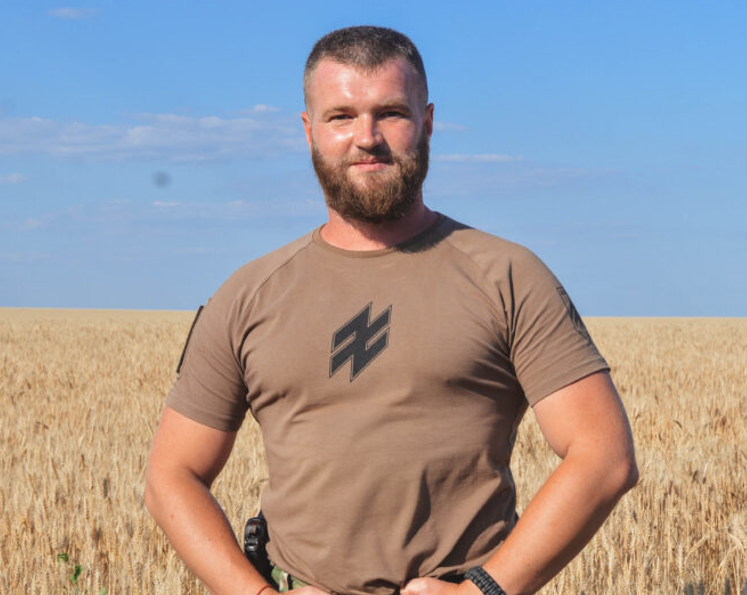 Sviatoslav has been in uniform since the beginning of Azov. A lot of guys moved to other units, but he stayed and constantly showed his growth. In 2014, he trained with Ukrainian units together with Americans and Georgians according to NATO standards. It was difficult training and not everyone could stand it. 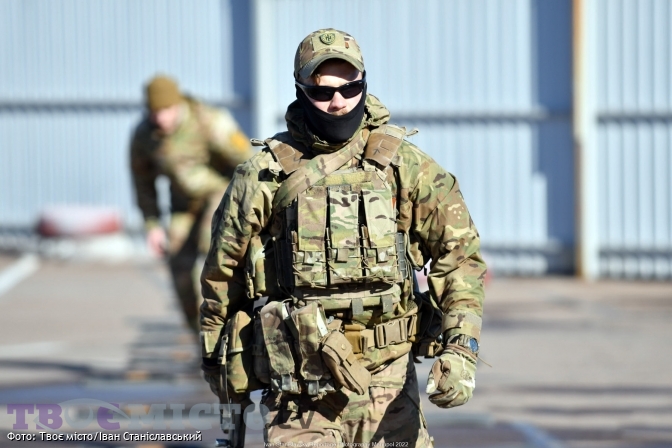 «He then lectured at the Azov Sergeant School, a recruiting school, where the history of the regiment was told. They read a lot, explaining that their sign is the idea of ​​the nation, this is their credo. The main thing for them is to preserve the Ukrainian people,» – Lidia said. 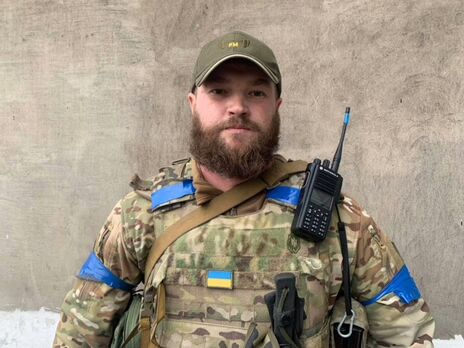 As soon as Azov was created, the guys supported Mariupol. There were orphanages, which they took care of, financed and helped.

«Sviatoslav always invited me to Mariupol. I was there when he married his girlfriend and they had a baby. She is a student from Lviv, she came to him on the Maidan, and then they got married in Mariupol.»

About the mood in Mariupol before the war

I can’t say that they felt anything. I was there for the New Year. Arrived in late November and left in January. 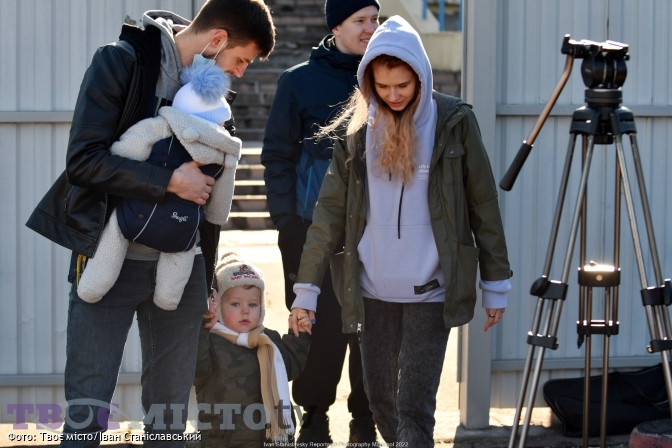 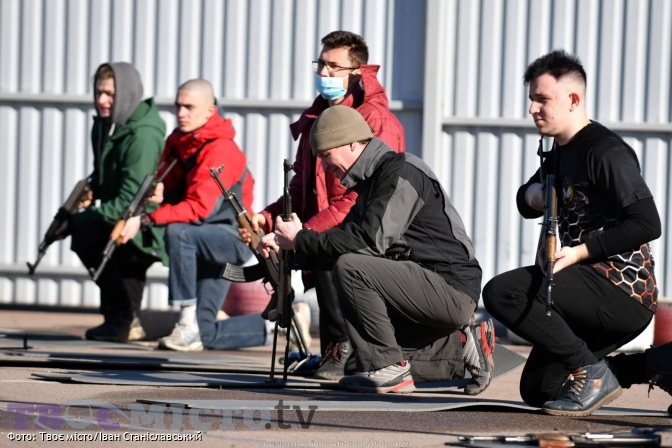 He probably knew more than we did, but he didn’t scare the family. However, Sviatoslav probably knew about the offensive, so the day before he came home and said: «Quick, get ready and go.» «Will I be back in a week?» She asked. «Yes, you will return,» he replied. They are now safe in western Ukraine. We asked her that maybe, daughter, you would go abroad, still a small child, 5 years old. She says: «No, I will wait for Svyatoslav,» – the fighter’s mother recalls.

«Sviatoslav spoke to me on the morning of May 20. He said negotiations on the «200s» were still under way because the boys wanted to be buried by their mothers. On the evening of May 19, he appeared on television. He said they complied with the order that the evacuation of both civilians and the sick and seriously injured had taken place. They did everything.» 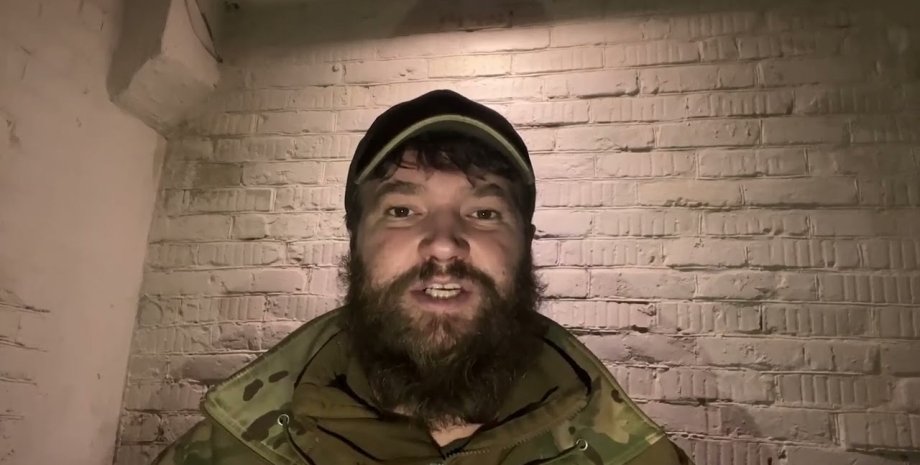 On the morning of May 20, he called back and said, «Mom, don’t worry, I’m fine, I won’t be in touch for a while.» Before that, the woman wrote: «Son, all Mykolaiv prays for you because he knows you». He responded, «Mom, we’re holding on.» The parents believe and know that Svyatoslav will return, they are sure of it and can never think otherwise.