18:01 17 October 2021
Tweet
749 0
On Saturday 18 September, Ukrainian rock band Okean Elzy will perform a free show in front of Ivan Franko University, which is celebrating 360 years. Slava Vakarchuk, the band’s frontman, obtained a PhD in physics there. Here, an American asks this intellectual and rockstar to define «Ukrainian freedom.» 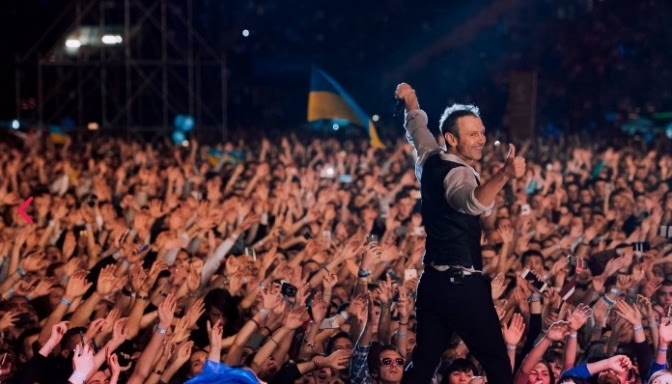 In 2019, when Ukrainians were considering who should be their next president, Sviatoslav «Slava» Ivanovych Vakarchuk was in contention. His band Okean Elzy has packed stadiums of tens of thousands singing in the Ukrainian language, and he had already served, in 2008, as a member of parliament. He opted not to run–the actor Volodymyr Zelensky became president, but Vakarchuk is still a chronicler of Ukrainian life.

Indeed, his songs seem to narrate the modern Ukrainian experience: As you walk the streets of Lviv, you will likely hear, at least once a day, a crowd of people singing his song «Na Hebi» («In the Sky»), perhaps the unofficial anthem of Lviv. He was also among the stars who took to the stage during the Euromaidan Revolution on Kyiv’s Independence Square in 2014.

And, unusually for both a rockstar and politician, he’s a qualified intellectual: The son of the late Ivan Vakarchuk, former education minister, Slava Ivanovich is a trained physicist, having earned his PhD in supersymmetry from Ivan Franko University. Supersymmetry, the field that inspired the construction of the Large Hadron Collider in Switzerland, is at the edges of human knowing, but Vakarchuk has also proven adept at trivia: In 2005 he won Ukraine’s edition of «Who Wants to be a Millionaire?»

As an American who once worked for the powerful people who started our wars and controlled our discourse, including the chairman of Fox News, I hoped one day I could speak with this rockstar-physcist-politician about the meaning and promise of Ukrainian democracy–both because he has seen things and also because he knows how to put his experiences into words.

Last spring, when Okean Elzy played a special show at the Lviv Opera House, I had just a couple minutes to speak with Vakachurk. Physicists seek to uncover mysteries by connecting things that seem quite implausible. So I asked Vakarchuk, the physicist, in his time as a chronicler of Ukraine and as a politician seeking to steer Ukraine, whether he is discovering or realizing or seeking some grand unified theory of Ukraine. What is Ukrainian freedom?

«If I knew the answer I probably would be making this the most successful country in the world,» Vakarchuk said.

In my old way of thinking, from years in the throes of American politics and media, I would have appreciated a clearer, simpler answer: Ukraine is about x, y, and z virtues. Many people I speak with in Lviv have told me of their frustration that Vakarchuk left politics twice: He was a MP in 2008 and again in 2019. This suggests, at least, that they once wanted him there fighting for them.

But hearing Vakarchuk, I thought of Alyosha’s Speech at the stone in Dostovesky’s Brothers Karamazov: a moment to pause, consider how we should live, and then resolve to do it.

«And even if we are occupied with most important things, if we attain to honor or fall into great misfortune–still let us remember how good it was once here, when we were all together, united by a good and kind feeling which made us... better perhaps than we are.

«If a man carries many such memories with him into life, he is safe to the end of his days, and if one has only one good memory left in one’s heart, even that may sometime be the means of saving us.»

Must democracy always be about daily battles between opposing sides until for ever and ever, or can we build some essential vision of harmony, with honest-speaking couched in affection? I grew sick of the constant need to be angry and paranoid in American politics. I used to mock the poets and musicians who try to stir us to a better vision, or at least get us to pause and think.

We had little time for festivity and music: how could sing and dance when everything was so dire! And so with little joy in our own souls, we spread anger and paranoia through the land.

The President of Ireland is a poet; the Queen of Denmark is an artist: but these leaders occupy ceremonial, non-political roles.

Maybe the poets can’t easily be political leaders–but their poetry, their chronicles of a nation–can be enriched by at least spending a little time behind the veil of power.

Okean Elzy – or Elza’s Ocean – will play a tribute in honor of Ivan Franko University’s 360th anniversary. That university, which since 1661, when the Jesuits ran it, has been variously been called Josephine University, Lviv Lyceum, Franz I University, Jan-Kazimierz University of Lviv.

«This year, Ivan Franko National University of Lviv turns 360 years old. In honour of this date, my friends and I, also [Ivan Franko] university graduates, decided to make a gift to our Alma Mater», – the band’s frontman Sviatoslav Vakarchuk stated on the «Okean Elzy» Facebook page.

The concert will take place on Saturday, September 18, at 20.00 in the square in front of the main building of Franko University. The event will be open and free of cost for everybody.

Okean Elzy, with Lviv group Oden v Kanoe («One in a Canoe») on 9 September released a song about Lviv, «Місто Весни», or «Spring City.»