By the Riverside: Two Days at Dniester Canyon. Lviv Stories

17:26 04 October 2021
Tweet
442 0
«Down by the river people are happy to give,» sings Creedence Clearwater Revival in «Proud Mary.» An American discovered the truth of this in the Dniester River Canyon. 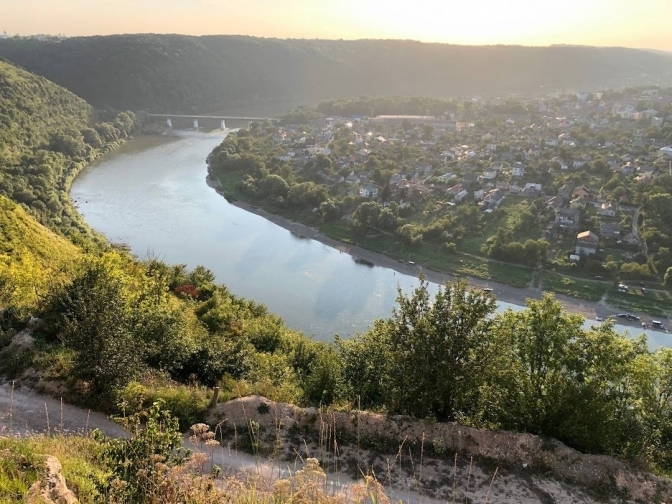 «I’m going for a week to the rivers and forests,» I said to a few friends. We were hanging out in the forested courtyard of their architecture studio hidden amid ancient buildings near the city centre.

«In the rivers and mountains, you can be clean inside,» said Oleh. «You can be true with you.»

I took those words with me the next day, as I set off by car with my friends Taras and Oksana and their son Ruslan. Our destination: Zalishchyky, a town on the Dniester River, four hours east of Lviv. While driving, Taras as is his wont narrated the situation around us, complaining about «stupid nerds,» while deftly navigating the occassional and expected chaos on the nicely paved but wild-spirited Ukrainian roads. 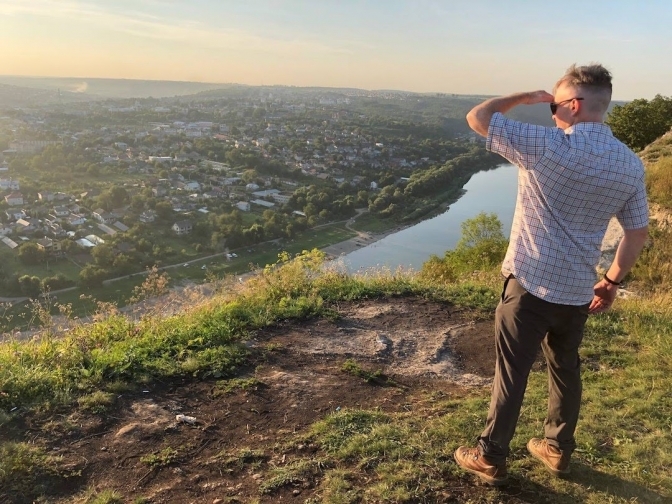 We discussed whether American or Ukrainian highways are safer: American interstates have dividers between directions but maybe, I posited, this makes people drive more carelessly and freely. In Ukraine, you never know when someone will be coming toward you in your lane and so you have to be on guard. Still, here, there is a great protocol of passing etiquette, with people flashing their lights to thank those who let them pass, or to notify that it is safe to pass.

As we pulled into Ternopil, Taras and I had as is normal moved onto discussing socialism and democracy. «We have a secret power,» he said. «Our people have been vaccinated against communism.» 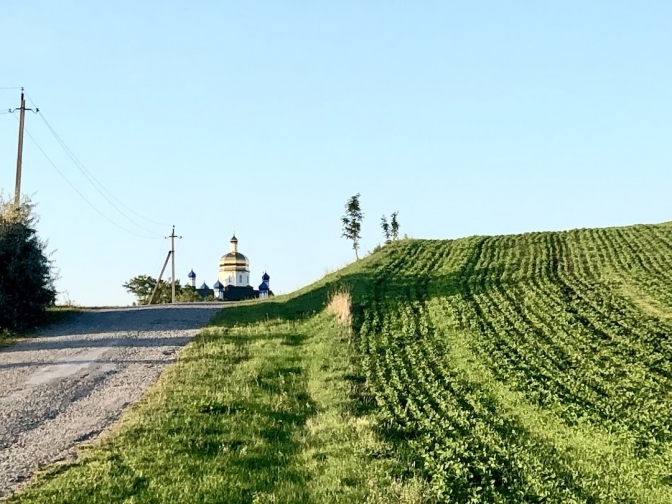 We entered the rivertown of Zalishchyky, then, crossing the oblast border from Ternopil to Chernivtsi, we drove over the River Dniester, passing the cliffs and up through the hills. We reached a verdant cartoon-green field leading to a gold domed church on a warm bright evening. Just beyond at the cliff-edge, we looked down at the serpentine river, wound around the pleasant small peninsular city of 10,000. I heard distant music and laughter from the beach with tiny cars parked and tinier people swimming and dancing and barbecuing.

«That is our next stop,» said Taras.

We drove down, across the river, to the beach, parked the car, and began to set up the folding barbecue kit, a common trunk-item for Ukrainians. Others on the beach approached us: a guy to our right who saw Taras’s car and told him he had a spare part for that car he didn’t need and was happy to give it away for free: the generosity of the river-people. 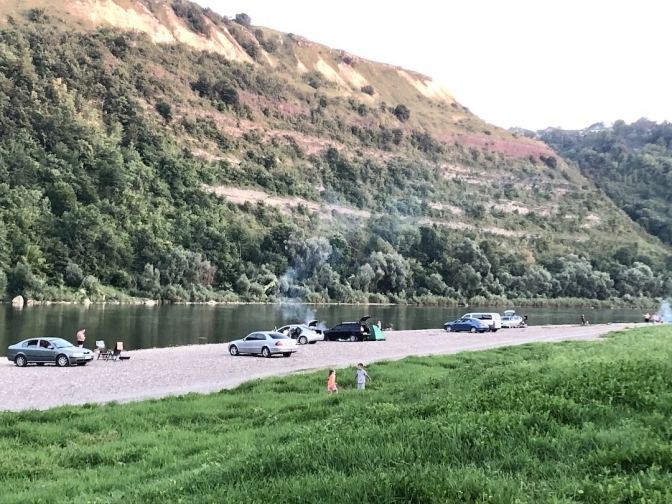 Then a group of old friends, four men in their 50s or 60s and some of their sons, hollered at us to join their barbecue. While Oksana waded in the river and Ruslan sat at the campsite, Taras and I walked over and soon our new friends handed us shots of homemade liquor, samohonka, and with their hands they plopped pork, potatoes, and onions on plates.

It was the birthday of one.

Besides a short break I took to swim in the gloaming light, we spent hours talking, me trying to speak in Ukrainian. The cool night ended around our campfire, with everyone sharing the food, wine, and stories they had brought. Trees and rocks tucked a church into the cliffside across from us. «They’re watching us,» said the man being honored, laughing as all begin to construct wild tales amid the flickering light and occasional sound of someone plunging in the water. 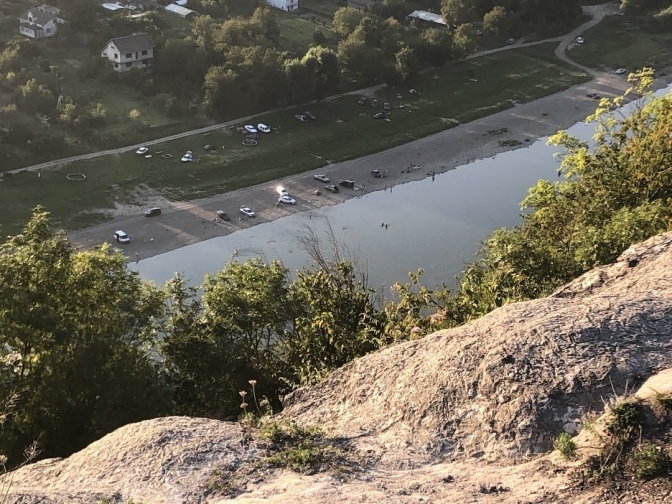 I woke in my room in a strange hotel with shell-and-stone hallways reminiscent of Jerusalem. After a breakfast of veal and potatoes and a short visit to an abandoned riverside palace we returned to the river and the beach which faced the high rocky sun-soaked cliffs. Taras was cooking, I was reading, Ruslan was chilling, Oksana was in the water.

Later I stood lost and found in that water, waist deep watching the current flow. A flotilla of rafts disrupted my meditation. From a distance I heard people singing the words of Queen, «We are the Champions, no time for losers,» etc. Some on the beach began to join. 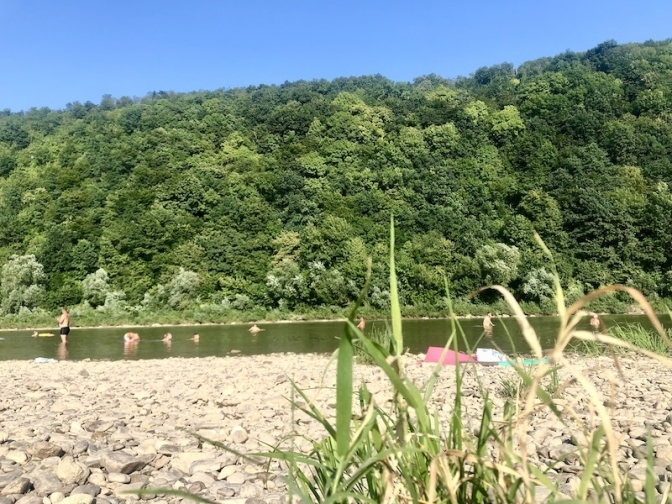 As the singing-raft approached the shore for disembarkation, the rafters cried out «Слава Україні [Slava Ukrayini]!» «Glory to Ukraine!»

And from the shore-people returned the resounding volley: «Героям слава [Heroyam slava]!» «Glory to the heroes!»

«I have an idea,» Taras told me. «Why don’t we build a raft, and sail it from Lviv region, a three-days journey, to this beach. It will be a great adventure.»

In the distance, I heard a noise amid the waters, coming around the bend.

An assemblage of rafts headed toward us, ‘gainst the backdrop of the painted cliffs. People were jumping off the back and swimming. Music was playing. A few sat upon a hammock. Some of the swimmers began to pull the raft-complex to the shore. They welcomed us to wade aboard. I said I was American which elevated the welcome. 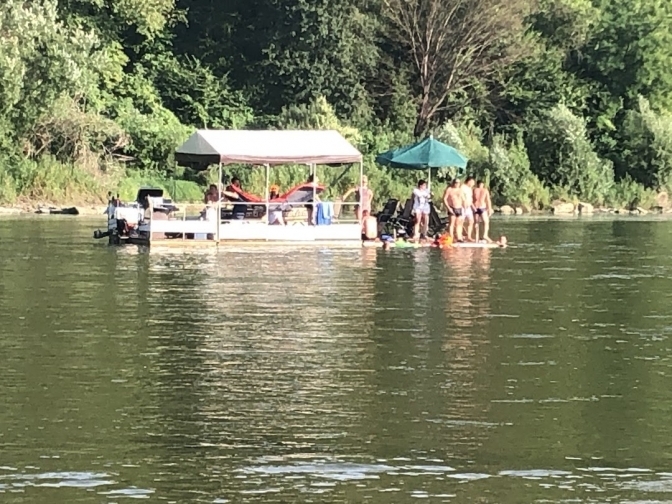 Soon, I was standing aboard under a canopy at a table for twelve, across from a kitchen area with a grill. A man in a captain’s hat, jovially well into his cups, handed me a shot glass of samohonka and soon there was food–ah the generosity of the river-people.

We talked and joked in Ukrainian awhile enjoying life on the lovely river, sheltered by the cliffs, in this free pocket of the world, a far cry from the everything I currently read about in the news most everywhere else.

It was time to return to Lviv; my friends had work the next morning and I was going deep into the mountain region of the Hutsul people.

As I stepped through the water back onto the pebbled beach, I recalled that great old Creedence Clearwater Revival song, written by John Fogarty, sang by Tina Turner and others, «Proud Mary»:

«If you come down to the river

I bet you gonna find some people who live

People on the river are happy to give»

«All the People Necessary for Happiness.» Lviv stories.

A Carpathian idyll on the river resistance