Defining the Lviv vibe. The story of a saxophonist who impressed the audience with a wild solo

12:30 26 October 2021
Tweet
765 0
The jazz jam was electric that night - as though the musicians thought they might never play again. At the end of the show, the lead guy, a saxophonist, offered a wild solo riff, while the rest of the room was silent. The crowd rose to its feet as the sax player finished, and while they applauded he fell on his back, laying on the ground. 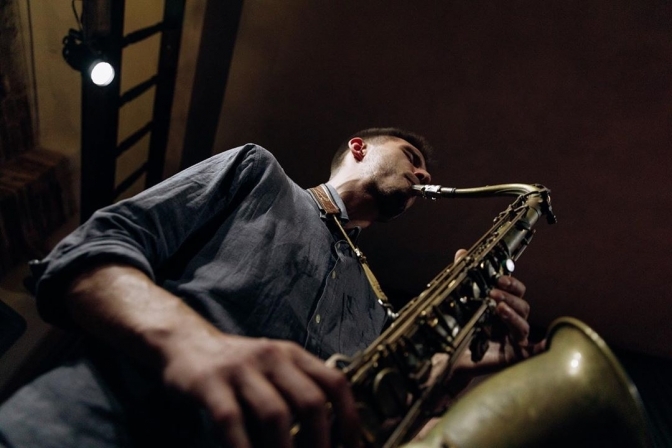 Back in New Orleans, when I needed a break, I would go to a jazz or blues club, like the legendary Chickie-Wah-Wah on Canal Street. I would tell no one of my whereabouts, and I’d sit in a corner and let the music take over while I listened and sometimes wrote ideas in a moleskine notebook.

A couple weeks before the pandemic lockdown altered our lives, I had the same experience in Lviv. I went to Dzyga Art Center, a building that forms the dead-end of Armenian Street. Atop the centuries-old building stands a wavy ladder to the stars, and on the second floor is a club where the music can also take you places. I sat at a small table against the wall hiding behind a plant. The jazz jam was electric that night – as though perhaps the musicians felt they might not play publicly again soon. At the end of the show, the lead guy, a saxophonist, offered a wild solo riff, while the rest of the room was silent. The crowd rose to its feet as the sax player finished, and while they applauded he fell on his back, laying on the ground. It did not seem like theatrics: but rather a well-deserved collapse after a stellar, energetic performance.

Andrew Dulysh is that musician’s name – and this week he will play his first proper show since that March night this at LV Cafe Jazz Club, with a crew of musicians he assembled. They’ll be playing tunes that «sound in the mood of autumn.» **Due to social distancing rules and the venue’s small size this story was published after the show.»» A native of Stryi, a city of 60,000 an hour south of Lviv, Dulysh grew up in a musical family: his mother, Natalia, is a singer and teacher; his father, Taras, is an accordionist and teacher; and younger brother, Roman, is also singing and playing music. Dulysh came to Lviv to study music five years ago. This city whose cobbled streets are full of songs, musicians singing and crowds dancing and singing, day and night is a good laboratory, he says, to innovate, which is the hallmark of jazz.

«Lviv is a nice a city for making music because it’s very young in its music roots and, I hope, is open for experiment» says Dulysh.

In its thousand-year history, Lviv has been exchanged between many empires and kingdoms, it’s been a center of coffee-shop dissent and high-culture opera, it’s seen horrible turmoil and lively peace, and in this context Dulysh identifies the «Lviv vibe» as something that is «always between something: between liberty and conservatism, between Europe and Russia, between old and new. This can be seen by architecture, which I adore.» At age 7 in Stryi, Dulysh started learning his first instrument, the сопілка (sopilka), the Ukranianian-Carpathian version of the block-flute. Then he added the clarinet, flute, and saxophone. In his musical development, he has taken inspiration from jazz legends like Stan Getz, Art Pepper, Cannonball Adderley and a «god of jazz Mr. Oscar Peterson,» and from modern musicians like American jazz saxophonists Joshua Redman and Chris Potter and from the UK, funk-soul-hip-hop-jazz artist Tom Misch, and funk-jazz band Jamiroquai.

«This is the most hard, philosophic, and complicated question,» he says. «I love music, it makes me feel different. I can feel freedom more than others. It is the way I can sublimate my feelings, energy, and emotions. But I’m just on the start of this adventure. … The important thing is that I can give something to the audience: emotions and some kind of meaning.» Lately, Dulysh has been playing on the covered sidewalk terrace at Amadeus many nights of the week, and he has played other small informal events, such as a salon gathering of writers and musicians – events that carry on Lviv’s artistic, intellectual history.  He’s a regular at the Wednesday night jazz jams at LV Café, and frequently plays the same as part of his funk project or with other bands such as Lemko Bluegrass Band.