«Putin is crazy, Russia is paralyzed». Interview with ex-Professor of Moscow state university

14:14 17 Februart 2022
Tweet
510 0
Lviv Now asked Elena Volkova, a former professor at Moscow State University and visiting professor at Lviv’s Ukrainian Catholic University, about the mood among Russians and whether they really want war with Ukraine.

Russian special services consider Elena Volkova an «enemy of Russia» and ban her lectures in the country. She is a Candidate of Philological Sciences and a Doctor of Cultural Studies who used to teach at Moscow State University. According to the professor, she saw with her own eyes when the Moscow State University began to develop and explain the concept of the «Russian world» to the students. She left Moscow State University after the conflict caused by a neo-Stalinist history textbook and because she was forced to be censored. Today she is a guest lecturer in many universities around the world, including UCU in Lviv. She recently wrote on her Facebook page that if she could, she would enlist in Ukraine’s territorial defence.

Resistance of Russian intelligentsia to the potential invasion into Ukraine

«On the one hand, we are like sitting on needles, on the other hand – it feels like we were sheep being led to slaughter. We no longer know how to resist, it is unclear what can be done – the punitive machine surrounded us on all sides, tied us up and the situation is helpless. It feels like a ninth wave is coming and you don’t know how to resist it all.

«The intelligentsia is rebelling against the war with Ukraine and against another invasion, but it’s weak and small. Civil society is largely paralyzed. All Navalny’s headquarters have been purged, people are being detained and imprisoned indefinitely. There is very little activism, there are small groups that continue to resist. But it’s all on the Internet because we can’t go outside.

«The «Memorial» community, formerly a powerful human rights centre, lies in ruins. They were practically eliminated.

«There is a Congress of Intelligentsia, but it is also a rather amorphous organization. It was created in 2014 by Lev Ponomarev. He is initiating the second statement against a full-scale war against Ukraine. This petition is signed but in a rather narrow circle. Only 4,800 signatures were gathered in 10 months, this is very little.

«There is a small group «Christian Action». It was organized by Maria Ryabikova, a former Olympic skier who was involved in Christian activism. They are organising pickets, in particular, against possible new aggression toward Ukraine. They wrote the appeal «Hands off Ukraine». Among the participants is Olena Sennikova, a dissident who has been in exile since Soviet times.»

The current state of civil society in Russia

«Russia is paralyzed. It’s like a patient who can’t speak well and you rejoice in his every whisper. And we can be glad that our intelligentsia has some signs of life, something it is trying to say and protest. On the other hand, I understand that the opposition is defeated and there are very few protesting votes.

«They are detained even for single pickets. After two or three single pickets, a criminal case may be opened. It seems that the police, the «E» centre, the FSB have nothing more to do but read social networks, endlessly sue someone for a post, a comment, or a like. Lawyers say that all our messengers are being read and that correspondence with Whatsapp and Messenger might be presented in court as evidence of the charges. 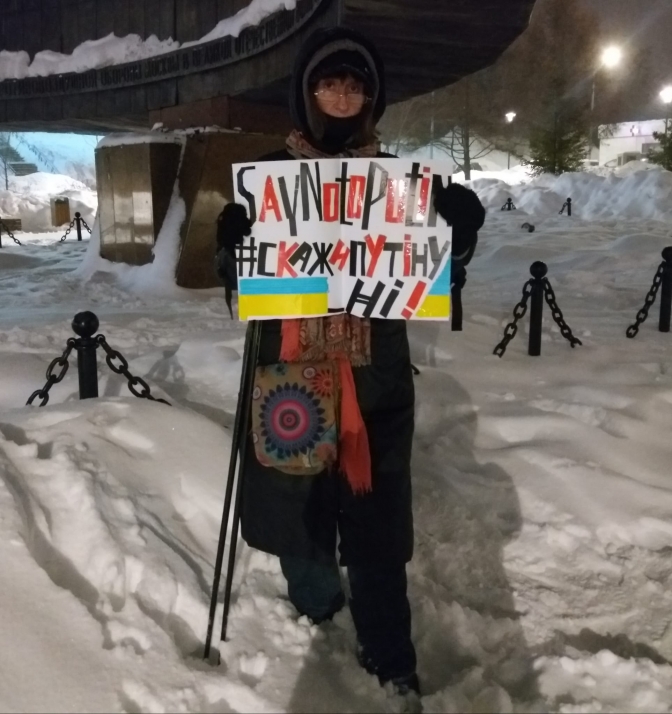 «There is a tense in English – Future in the Past – it seems to me that this is a metaphor for our time. Everything has already happened, the war has been going on for eight years, and our people write «if the war against Ukraine starts». I only cannot understand why it’s stated in the future if it has already happened in the past.

«Someone writes that it has been going on for eight years. Ponomarev from Congress writes about it. And then, they make a statement that «there should be no war.» Well, as eight years after the start of the war, you may call your statement that way.»

How civil society reacts to a possible military invasion into Ukraine

«I have a feeling that people [in Russia] are born again every day. They’ve just been born and now, they will start or not start a war with Ukraine. My friends from Ukraine, with whom I communicate, have a lot of scepticism about this situation. They say that bully, Putin, decided to scare the whole village because no one wants to talk to him. And now he will scare everyone, blow up their houses, and they will bow to him.

«It is widely said that the Kremlin is trying to manipulate the West and America by injecting the atmosphere. Many are also surprised that the severe sanctions threatened by Britain and the United States will be applied only if Putin attacks Ukraine openly. They had to be used without any threats – the colossal money and real estate of our thieves in law, our government, are concentrated in the West. And they are being discussed only now, after the hysteria and fear that Putin sowed by gathering troops on the border with Ukraine.

«Many see it as a game, including military expert Paul Felgenhauer, whom I trust. But, again, on the other hand, Putin is out of his mind, he’s crazy. So we don’t know what will happen.

«What I liked most was the position of Oleksandr Skobov, a publicist and author of the Grani.ru resource blocked in Russia. He writes very openly and frankly, and he posted a post on his Facebook page that sent 30,000 rubles ($400) to the Ukrainian army. He lives in St. Petersburg. I immediately went to his page to see if he had emigrated, but he didn’t.

«There is also a group of Vira Lavreshina who actively supports the Crimean Tatars and goes on pickets. I also went out with them when Ukrainian sailors were kept here in prison. I brought them parcels to «Lefortovo» and the «Sailors’ Silence» (pre-trial detention centres in Moscow) and went to single pickets with Vira Lavreshina and her group.»

How people react to a possible military invasion into Ukraine

«It is very difficult for me to judge because I have a very weak nervous system and do not watch the official media. The people I know do not want any war and are extremely worried about their friends and relatives in Ukraine. Those I know are horrified by this situation in Ukraine.

«This process has been particularly active since 2014. Earlier they were normal, and now start speaking in the language of TV and starts attacking you because they don’t not want to hear the truth. I think that the Germans experienced this from 1933 to 1943 – until the final solution to the Jewish question was exercised. They were also prepared, their consciousness was processed.

«After my lecture at UCU, the vice-rector Myroslav Marynovych asked me: «What is happening to people in Russia? Even with my friends. Yesterday, they were normal, today it is impossible to talk to them.» This phenomenon, when consciousness is processed, is scary. It happens even among people close to me – I lose them. Though a small section of the intelligentsia does not watch TV, most of the population still does. Hate is this poison, which has been affecting people’s brains for 10 years.

«So I think, they will accept anything. They will accept the war, go and die, give their sons away, and consider them heroes. I have tried several times during these eight years to persuade my acquaintances not to let their sons into the army because they will go and kill Ukrainians. Their parents told me that they were not fighting against the authorities and that the boy should join the army.

«Ordinary people still have this consciousness – they will rather send their son to kill, and then bury him, drink a glass and cry, remembering him as a hero. But they will not resist him going to war and taking up arms.

«It seems to me that this is an anthropological catastrophe in Russia – the loss of humanity, dehumanising of the masses. This does not mean that it is total throughout the country, there are a lot of healthy and humane people, and many of us. But only a small part of the intelligentsia will be protesting, those who haven’t been intimidated yet and have not gone into their personal lives, turning away from social problems.

«The mass consciousness is deceived. It also went through dehumanising in Soviet times. Putin’s government has stimulated and developed worse, lower instincts in people. Propaganda has created such a person that I am even scared to look her in the eye.»

Is there any light at the end of the tunnel?

«I see this light as the West has finally risen. It took a long time to activate this bureaucratic machine. We were waking it up for a long time, laughed at their expression of concern and bewilderment and absence of actions. But now, as never before in history, the West is really on the side of Ukraine.

«This situation must be used in a good sense for the benefit of Ukraine. It gives me some hope that Ukraine will be able to defend itself. In 2008, when the Russian army was marching on Tbilisi, it was Saakashvili’s talks with the Americans that helped stop everything. There are a lot of these negotiations now.

«I think Putin is taking hostages to trade for his financial investments and real estate in the West. Ukraine is a hostage in this trade. The Kremlin needs the power to preserve what has been stolen.

«Well, what are their values ​​- to return the Soviet Union and anger at Ukraine. But it seems to me that Putin no longer has such a drive. Motivation to preserve the stolen is much stronger than some historical reconstructions, restorations and expansion.» 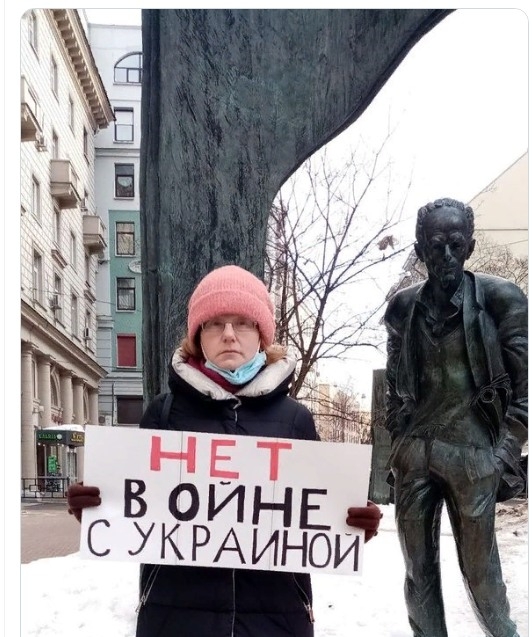 Do you feel safe and not going to emigrate?

«I do not feel safe and plan to emigrate. I’m tired of being afraid, I’m not even scared. Tired of imprisoning innocent people every day, sentences, torture. In this situation, we are somehow afraid, we have no strength.

«They say such disgusting things about Lviv. In one show, one of our propagandists said that «the people of Lviv met the Germans with bread, and they will meet us as well.» When «I arrived in Lviv and was sitting on Rynok Square with UCU students, they said they thought that Russian tanks would come to this square.

«I understand that this is a machine of destruction of everything human in people’s souls and destruction of people themselves. It is very sad and it is not clear who will defeat us in the end. Now, it is closer than ever. ‘You may like it or not, NATO is approaching.’» 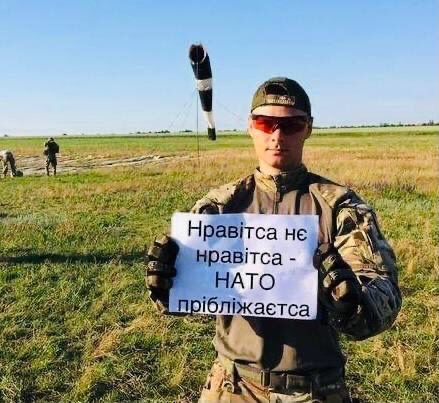