The island of education, or how Ukrainian teachers opened a school for refugees in Romania

13:53 21 June 2022
Tweet
125 0
Teachers have set up a school for 200 Ukrainian children at a Romanian college, and this model can be used in other cities. The initiator of the project Anastasia Konovalova talks about the initiative, challenges, and hopes of creating a Ukrainian school abroad. 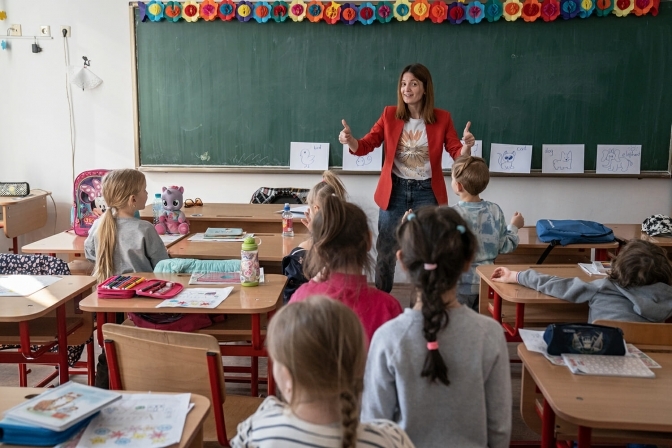 The first classes for Ukrainians opened at the «Mihai Viteazul» National College in Bucharest. About 200 Ukrainian children of all ages, including those who saw the war, will be able to study here. They came with their mothers from Kyiv, Irpin, Kharkiv, Mariupol, Odesa and other cities in Ukraine. These families arrived in Bucharest in the hope that they will find peace, work and a school for children, according to a report on the resource Dor.ro.

Eight Ukrainian teachers are holding A4 sheets with the numbers of the classes they will take. Together, they entered the high school building. These are teachers from Odesa who found a house in Bragadir and live there with some students and their mothers. Among them is Anastasia Konovalova, an English teacher and deputy director of the private school «Insula» («Island») in Odesa. 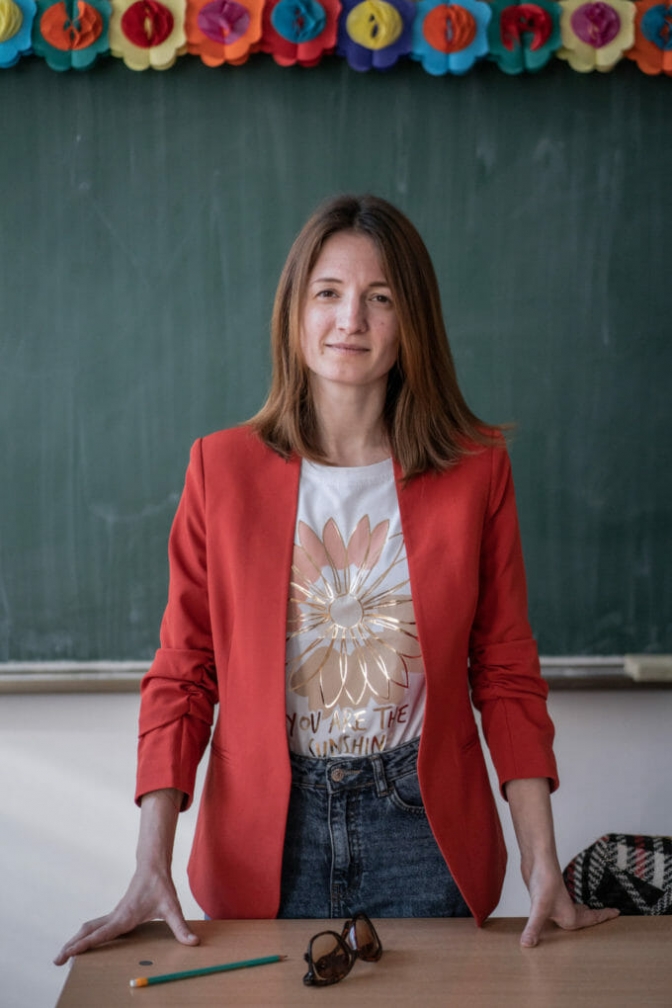 The woman has been working in the field of education since the age of 16, and school has always been her life and place of strength. Anastasia Konovalova says that her way of sustainability is to give children a chance for education, to create opportunities for their mothers to find work. The teacher says she and her colleagues settled in Romania, but upon arrival, they were overwhelmed by the guilt that every Ukrainian feels when he leaves his war-torn country.

Read also: «I want to breathe the air of my home and help here.» The story of a Ukrainian refugee who returned from abroad

She knew that many refugees, including children, came to North Station, and she understood that in the first stage they urgently needed food and a place to sleep, but they soon began to seek education as well. Therefore, when the refugees did not receive an answer from the volunteers as to whether they could find a place to study, Anastasia shouted in the middle of the North Station in English: «We are teachers! We want to teach! Children need education.»

Two days later, she received a phone call and was sent to Berchen, where a children’s activity centre opened. The Romanian Angel Appeal Foundation (RAA) organized it in the Ominis complex, which is the Bucharest Social Welfare Management Area (DGASMB). After Anastasia and her teachers announced on Facebook and Telegram that they would start classes for refugee children there, almost 50 students came to the first class. The teachers divided them into groups, but the room was tiny, so they started looking for a school in Bucharest. They were offered the Mihai Viteazul National College, where about one thousand high school students study. Agreeing with the directorate on eight classrooms, the teachers received the possibility to hold classes for three hours in the afternoon, from 15:00 to 18:00, for primary school students. Liliana Zashchevych, the principal of the college, was shocked by the story of the teachers, who told her that they were afraid every day that their school in Odesa would be blown up.

For young students, the walls were decorated with garlands of butterflies and paper spring flowers. On the first day, everyone expected 80 children to arrive, a maximum of 100. After a week of registration in the Google Form, which spread on social networks, 227 children came to the opening. 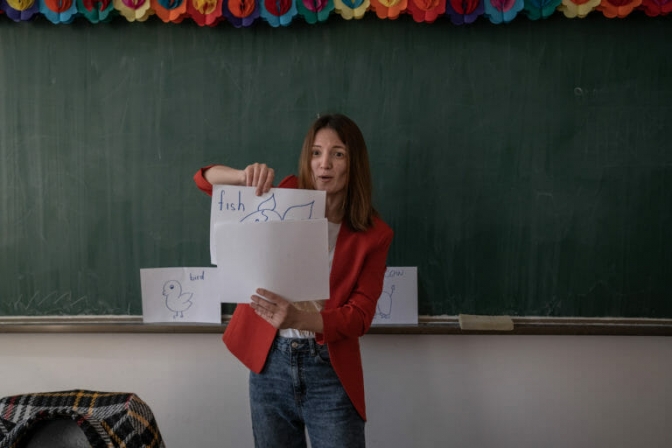 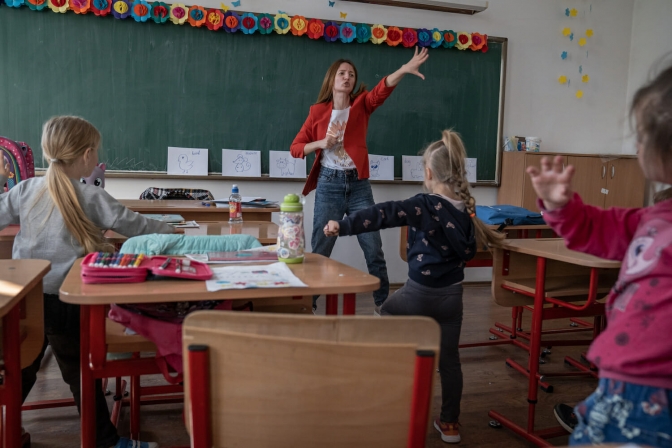 In Odesa, Anastasia had a house and her favourite job – in a modern and renovated school. When the war broke out, she and her husband initially planned to stay in their country house, but one day a bomb fell on a field close to it, so the couple and child gathered and went to the border with Moldova. The husband returned, and the wife went to Romania. Her colleagues and the parents of her students organized a shelter right there, and hoped to open another «Ostrivets» («Island») school.

As of the beginning of May, 39,000 Ukrainian children have settled in Romania and need Romanian language courses. For many Ukrainian parents, Romania is a country in transition, they stay here because they do not want to go too far from Ukraine, they hope to return home soon.

A 32-year-old Tetiana from Irpin, the town currently destroyed by bombing, and her husband studied economics in the capital. The man had his own financial audit firm, and she, who worked for an international cosmetics company, had to start a new job in the fall. Tetiana and her family left the shelling and settled for free through friends in an apartment in Berchen. Then, found a job for her grandparents at a shoe factory near the home. 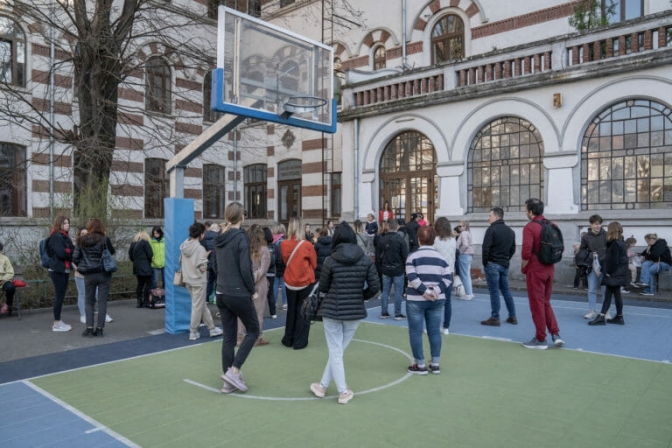 Now, Tetiana’s daughters are attending classes at Mihai Viteazul College. The younger one, 5 years old, goes to training, and the older one, together with the new teacher, studies Ukrainian, math and English. They work on textbooks that teachers prepare every day. They already have books for English, and recently Romanian donors have also donated fairy tales in Ukrainian.

If in April, some mothers said they wanted to return home, now that Odesa has also been bombed, many mothers abandoned their plans. Tetiana hoped that her daughters would start the new school year in the fall at home, but she did not want to return her children to the war. In a few weeks, the woman plans to start working as a translator and help Ukrainian families in a public organization.

In the first week of school, teachers heard their students talk about the war, sometimes with fear. «I see them smiling, and I have to be strong and tell them: your dad is going to build a new house, etc... Nobody taught me to teach a subject when it hurts. Nobody taught me to hug my mother in Mariupol and tell her that her child is safe now. Nobody taught me to swim in the sea of ​​children’s pain and smile, dance, sing,» – Anastasia shares.

A Romanian high school teacher once offered her a help with clothes. Anastasia was shocked by this gesture of, because she was tired of looking shabby, as the refugee budget is not enough for these things. «We suffer, but we are not victims, we feel pain,» – says Anastasia.

In April, high school students from the college’s robotics club decided to spend a few hours with Ukrainian children to teach them how to program. The college’s head, Liliana Zashchevych, says that Ukrainian teachers can count on the space in Viteazu as much as they want. Romanian teachers are happy to offer help, with one teacher telling Anastasia that she can provide more building if she needs more space to integrate children.

Anastasia also received job offers from private schools, and the management of one of them offered a kindergarten and housing for her son. She would like to send her son to a private kindergarten, but cannot afford it. In the end, though, she disagreed. 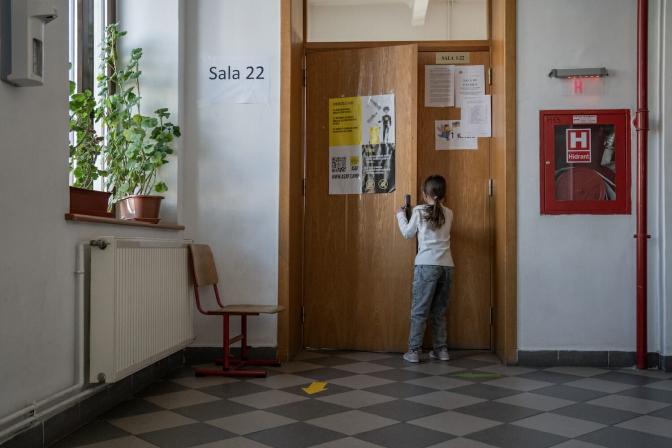 A delegation from the Romanian authorities, including the Minister of Education and the European Commissioner for Employment and Social Rights, Nicolas Schmidt, came to the Mihai Viteazu National College to see the Ukrainian school. «Good job,» they said.

«But we still need money. It sounds easy, but it is very difficult to receive help. It’s easier to help emotionally than to ask for help,» – she adds.

Thanks to funds raised by ordinary citizens and the support of the Romanian organizations Angel Appeal and JRS Romania (Jesuit Refugee Service), the teachers were able to continue their project in the spring. In April, they also received tablets for children, school supplies, video projectors.

However, the most important need is still a monthly salary, and the news that the JRS will hire teachers from May for six months was a joy for the whole team.

«It is important to create this demo version of the system, which can then be played in other cities in Romania. It is a myth that children learn just by sitting in class. No, they need to be taught. In all countries that have already been trained for immigrants, such as France or Germany, they have special language courses,» – said Anastasia, adding that in Poland, where most Ukrainian refugees live, it was easy for children to integrate directly into schools of origin. After all, the Polish language is similar to Ukrainian. And in France, for example, children from Ukraine were enrolled directly in national schools, and the state provided them with support for learning French.

Recently, a team of Ukrainian teachers opened four more primary classes at another school in Bucharest, «Ienăchiță Văcărescu», with financial support from the Romanian Foundation and UNICEF. Local authorities say the Viteazu project can be replicated in other cities if teachers find space to organize it.