Exclaimed «Glory to Ukraine» and cried with joy. Memories of how the blue-yellow flag was first raised in Lviv

12:19 23 August 2022
Tweet
807 0
Fear and risk. Entire Soviet Ukraine looked at Lviv. The capital of Galicia became the inspirator for the national revival. Lviv was one of the first cities to raise the blue-yellow flag over the City Hall a little more than a year before the proclamation of the state's independence. On April 3, 1990, thousands of people gathered in the main square of the city. Seeing the national flag on the tower, they shouted at once in delight; some even cried, and Lviv expressed its pro-Ukrainian position. 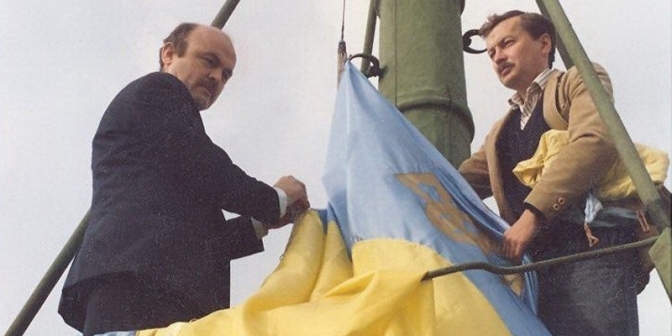 The document of Ukrainian identity

Lviv historian Andrii Hrechylo was elected a deputy of the first convocation (1990-1994) in the Lviv City Council and became the author of the decision to raise the blue-yellow flag over the City Hall. He recalls how important it was to draw up a document so that it wouldn’t be rejected by the communist authorities.

«We couldn’t write mechanically that we were to raise the flag: the leading Soviet authorities could overturn the decision. In particular, the prosecutor’s office could submit a protest if the document didn’t comply with relevant legislation. We couldn’t allow the communists to declare our symbols illegal and force [deputies] to repeal the decision with shame. In the resolution’s text, I pointed out that the Ukrainian national flag should be raised above the City Council on certain days together with the state flag of the Ukrainian SSR», – says the historian.

The last point deserves special attention, as in addition to raising it, the national flag was to be protected from supporters of communism who could plunder it: «4. Address the Verkhovna Rada of Ukraine with a proposal to consider the status and procedure of using Ukrainian national symbols and the establishment of responsibility for mocking it.»

At that time, as a result of the first democratic local election in March 1990, the majority of deputies in the Lviv City Council were democrats. Thus everyone understood that there should be no problems with voting and support for the decision. The solemn session was planned for April 2, but to follow the procedure without disrupting the process, the chairman of the city executive committee, Bohdan Kotyk, proposed postponing it to April 3.

«On April 2, we opened a session at which the commission on deputy ethics was instructed to check the credentials of 150 deputies, whether everyone could vote and make decisions. After that, Bohdan Kotyk announced a break until the next day», – says Andrii Hrechylo.

This move was insurance in case the Soviet authorities would accuse the deputies of illegal actions and violation of the procedure’s rules. However, it was not entirely clear for many of those who came to the city council on April 2, including deputies.

«I said that there were no problems, and tomorrow [April 3], everything will go according to plan. We predicted about 100 votes in favour. That's because, in addition to the democratic majority, a small number of deputies represented various communist structures», – said the author of the resolution.

A day in history

On April 3, at the beginning of the solemn session, Andrii Hrechylo read the text of the resolution as the author. Later, there was a discussion in the hall between the city’s and people’s deputies whether the decision should be made just in Lviv or throughout Ukraine. 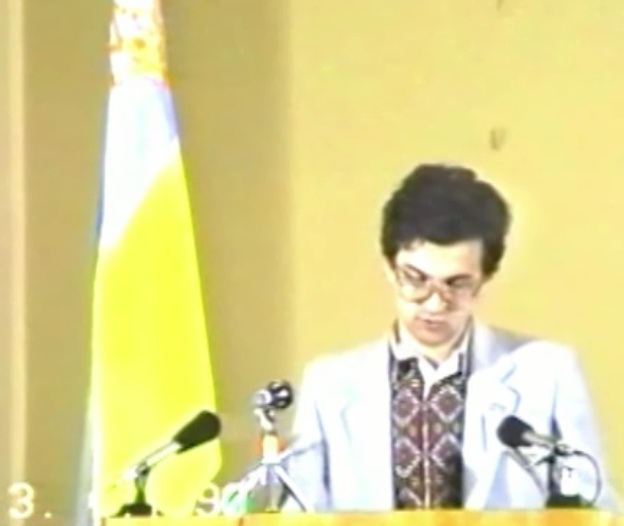 «Stepan Khmara, who was elected to the Verkhovna Rada, started saying that it was a shame and that the blue-yellow flag couldn’t be used together with a red rag of Soviet Ukraine. But he did not fully understand the situation. It also upset the people who gathered under the walls of the city council on the street», – the historian recalls.

Instead, the KGB deputy proposed to expand the list of days on which the blue and yellow flag was to be raised, adding all the public holidays of that time. Andrii Hrechylo cannot explain the purpose of such a proposal from the communist representative.

«The deputy Volodymyr Komar, now deceased, responded very aptly to Khmara’s remark, saying that we were resolving this issue within our powers, and we had to take into account that there was a recognised state flag of the Ukrainian SSR. And you [addressed to Khmara] were elected to the Verkhovna Rada to change this flag, and that the Ukrainian national flag would become the state one», – the historian Hrechylo retells. 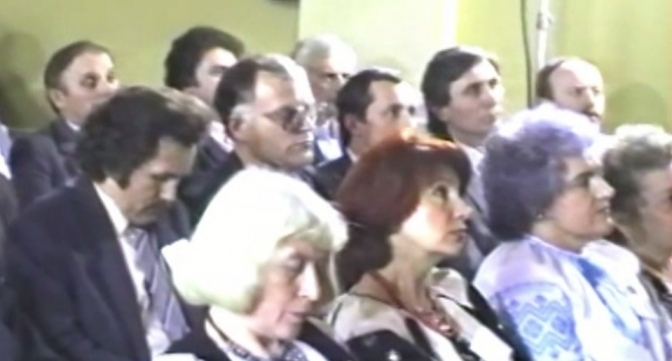 Eventually, the discussion ended because everyone realised that the red flag still remained an official state symbol, and its use could not be prevented.

Then Bohdan Kotyk started voting. The majority of those present in the hall supported the decision to raise the blue-yellow flag over Lviv City Hall. Only 6 or 7 deputies voted against it. Therefore, the national flag was recognised as lawful to use along with the current state flag. As Andrii Hrechylo notes, the flag of Soviet Ukraine remained above the Lviv City Hall (Ratusha) until the national flag was finally recognised as the state flag throughout our country.

In addition to the mentioned decision, the session also supported the initiative to instruct three deputies to hang a flag over the City Council.

Deputies of the honorary mission

Candidates for raising the national flag over Lviv were elected at the working committee’s meeting on the eve of the session.

«There were different proposals – they offered my candidacy and Yurko Voloshchak, but we refused. Yurko suggested that one of the senior deputies do it and proposed the candidacy of Ms. Stefa Shabatura, who was a political prisoner, a dissident and a shistdesiatnytsia (a name of sixty’s dissident intelligentsia)», – Andrii Hrechylo said.

At the same time, to add symbolism, the historian advised that three deputies perform the honorary mission. Therefore, two more were elected to Stefania Shabatura’s company – the oldest deputy Yevhen Shmorhun and the youngest one, Ihor Shkarpynets. However, in the end, a deputy representing the working class was appointed instead of Shkarpynets. It was Zynovii Saliak. As the historian notes, there were some relics of the class approach at the time.

Recalling the events of April 3, Zynovii Saliak himself says he didn’t go but ran to the tower – so great was the desire to raise the national flag.

«At that time, the political mood in Lviv was elevated. In addition, we as deputies felt responsible to our voters. The Market Square was crowded that day – about 30 thousand people. And everyone chanted «Glory to Ukraine!». When we went downstairs, I saw that many women even cried from this event», – he said.

The Lviv regional council, also consisting of the majority of democratic structures, approved raising the national blue and yellow flag throughout its territory in three weeks.

Most interestingly, according to Andrii Hrechylo, even after these events, there were still «reserves» in the region, where local authorities were controlled by the heads of collective farms or party nomenclature, so the process was delayed until May-June.

Stryi was the first city in the Lviv region where the blue-yellow flag was raised. However, the decisions there were approved at the level of the executive committee, not the council. The regional council voted to use the national flag in the Lviv region on April 28.

Exhibit in the museum

In fact, on April 3, 1990, there were two blue-yellow flags in the Lviv City Council. One of them, a smaller one, was brought to the session hall by deputies and installed near the presidium. A larger flag was raised above the City Hall tower.

«One of our deputies, Yaroslav Lemyk, brought a smaller flag to the hall, and he even made sure that a special seal was put on it in order not to confuse it. Every year we hold solemn sessions, to which deputies of the first convocation of 1990-1994 are invited, and this small flag is symbolically brought into the hall», – says Andrii Hrechylo. 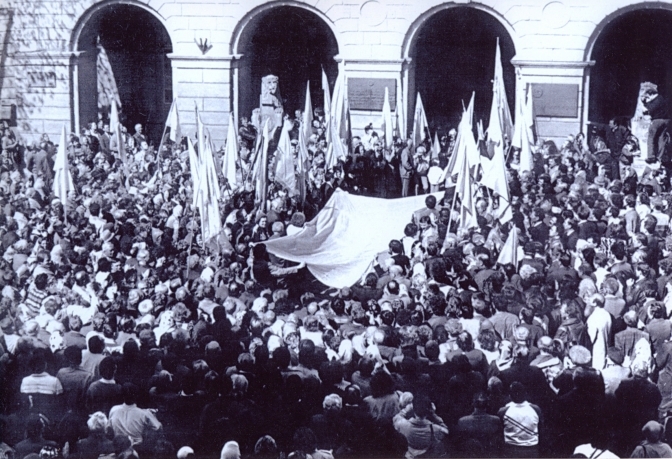 Today both national flags are kept in the Lviv Historical Museum.

It should be noted that the legalisation of the blue-yellow flag took place only at the end of 1991. In September, the Verkhovna Rada passed a resolution legalising the use of the blue-yellow flag. In fact, the flag of the USSR became out of state use since then. The decision was finally adopted on January 8, 1992.

As enshrined in the 1994 Constitution, the historian notes that national symbols must be approved by law. Unfortunately, we haven’t yet adopted this law because the constitutional majority of the Verkhovna Rada must support it.

«It’s a bit strange. After the approval of the Constitution, a working group was formed to write bills at the Ministry of Justice, and I was its member. Then there was a discussion – I proposed to make three separate bills on the state emblem, flag and anthem. Some lawyers argued this should be approved by one law. However, it was possible to adopt separate resolutions. In the end, even a separate law on the anthem had already been passed, supported by more than 300 deputies. Why did the question about the flag «hang»? Because they were linked into one joint bill, which also deals with a «big» coat of arms (note – trident is officially a «small» coat of arms). But as far as we know, we still don’t have it,» – explains Andrii Hrechylo. 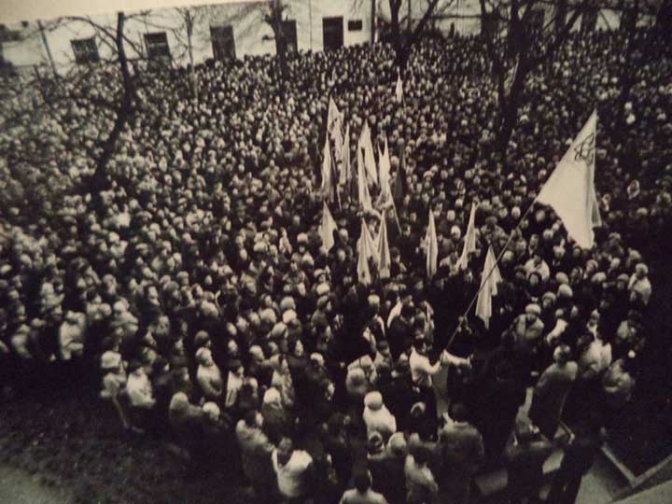 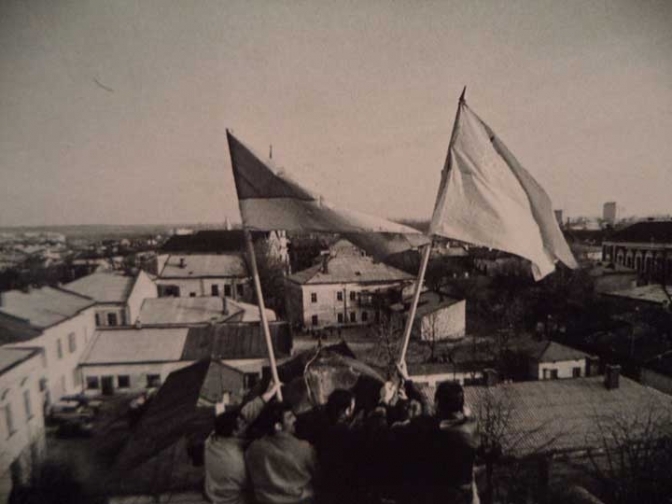 How Lviv lived before Independence

After raising the blue-yellow flag over the City Hall, special attention was paid to Lviv. The central government was waiting to see if the people of Lviv would keep the flag or not. 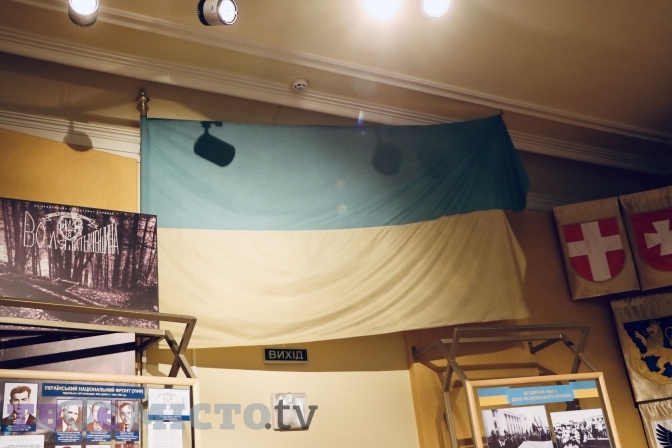 As we know, on April 12, a bust of Lenin was covered with the national flag in Lviv. A few days later, a statue of Taras Shevchenko was installed instead of the monument to the Soviet leader. 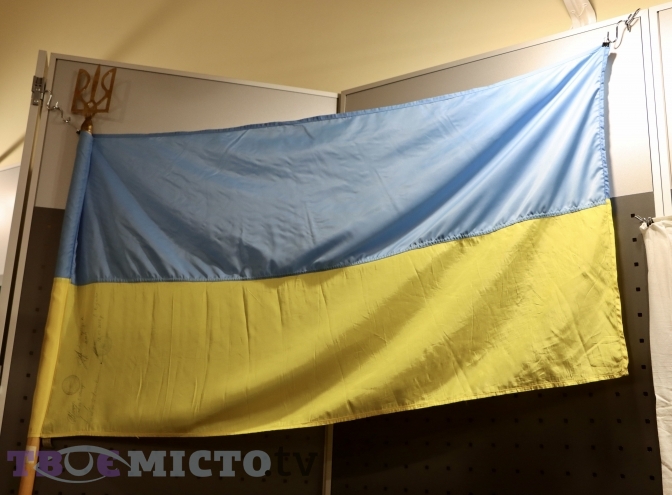 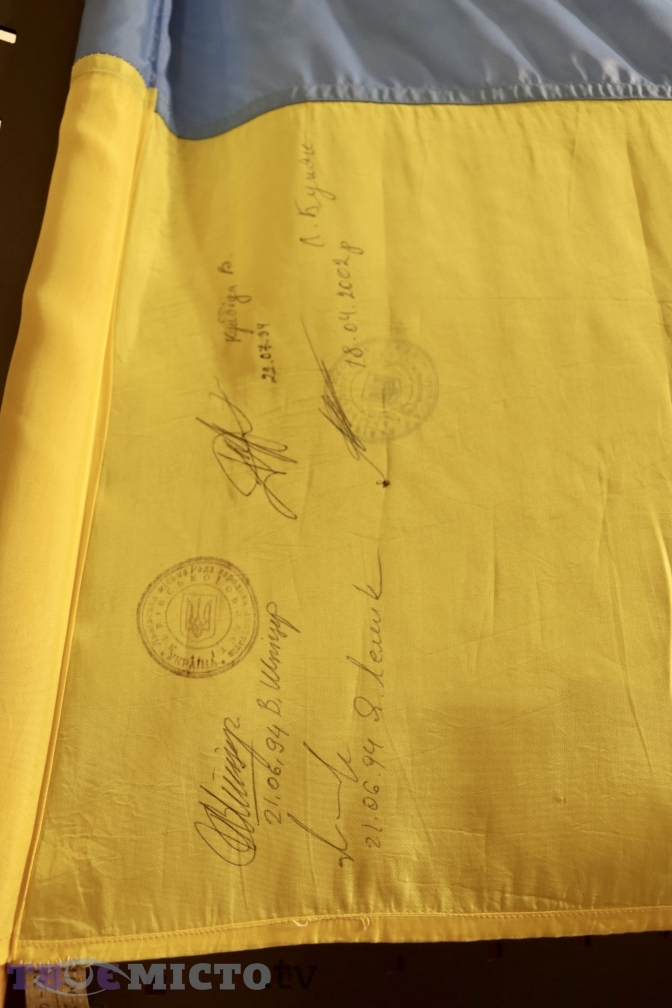 On September 25, a crowded rally took place in Lviv. Although public meetings (viche) had been held in the city since the late 1980s.

Note that 1989-1991 were historical years for Galicia and Western Ukraine, as the views of local leaders were essential to the leadership in Kyiv. On January 22, 1991, a symbolic «chain of the union» took place between Lviv and Kyiv.

On March 30, Cardinal Myroslav-Ivan Lyubachivskyi, the head of the Ukrainian Greek Catholic Church, arrived in Lviv.

August 1991 was especially active. Then, on August 18, the USSR set up a state committee on emergency issues, a self-proclaimed body that wanted to preserve the union by removing Mikhail Gorbachev. A coup began in Moscow, and the authorities in Kyiv took a wait-and-see position. On August 20, a rally was held in Lviv on the square near the monument to Ivan Franko to calm people. They were still scared.

On August 23, the chairman of the Lviv regional council, Vyacheslav Chornovil, issued an order terminating the Communist Party’s activities in the region. On the same day, a multi-thousand viche took place near the Opera House.

On August 24, deputies in the Verkhovna Rada in Kyiv voted for the Act of Independence of Ukraine. The very next day, August 25, a viche dedicated to the proclamation of Independence was held again near the Opera House in Lviv.

Photo by Anna Chystiakova and from the archive