How jazz is like mountain-biking: ‘everything is a surprise’ 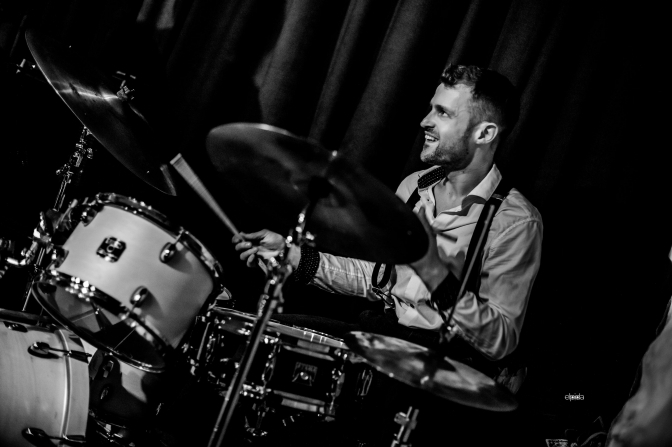 When he had to return to Ukraine for his aunt's funeral, Lviv's jazz and media community rallied to help him create a virtual graduation recital.

Seven years ago, Nicko Shevelov, nearly 20 and intent on being a professional mountain-biker, attended a jazz show at Dzyga, the art venue at the end of Virmenska (Armenian) Street. The music, especially the drumwork of Igor Hyndyn, inspired him.

"He was passionate and free," Shevelov says.

So, there at Dyzga, the young mountain-biker talked with the highly-regarded Hyndyn, who agreed to give him lessons. Shevelov learned fast—and changed professions.

"Nicko impressed me with his desire to play," Hyndyn tells me. "He learned all the basics in half a year. Now he is studying with masters from whom I also would like to take lessons."

Indeed, after advancing quickly, Shevelov got the idea to study jazz in New York. He applied to City College. Among his mentors is Adam Cruz, who has played with the late Chick Corea, a Leopolis Jazz Fest favorite. 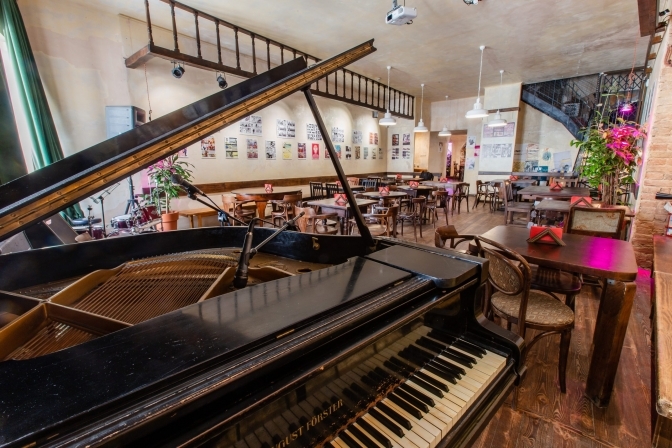 I first got to know Shevelov when he returned to Lviv in January for Ukrainian Christmas. After the short lockdown, he joined local and visiting talent in some energetic sessions at the LV Café jazz club. To my ears, his style is "lucid drumming" – a precise softness rather than a wild brashness, more Chopin than heavy rock.

He is bringing his style to a new regular gig at Manhattan's private Yale Club, for alumni and friends of the storied university, a swinging relic of a century ago. Because of the esteemed address, he's able to get some great musicians to join him.

Hungry for jazz wisdom, Shevelov wanted to learn from the drummer Al Foster, who for many years played with, and was a friend of, mega-legend and jazz revolutionary Miles Davis. A professor connected Shevelov to Foster, and the young Ukrainian offered to be chauffeur to the old, hard-to-reach American master.

Shevelov's plan worked. In our conversations, Nicko, who sounds more like a New Yorker than a Leopolitan, flavors his sentences with the names of his heroes, the great jazz musicians, and I'm sure it was the same in the car as he drove Mr. Foster to gigs around town.

Turns out they both drew inspiration from the greats of the 1950s and '60s: Charlie Parker, Thelonious Monk, Sonny Rollins, John Coltrane, and Joe Henderson. A mentorship and friendship developed.

“Al is a living legend from another generation where finding your own sound is the highest achievement, whereas now I think the focus is on playing faster, cleaner, and more ‘correctly.’”

Al Foster's Ukrainian understudy likewise strives to innovate rather than imitate. Playing such jazz, Shevelov says, requires gaining a deep knowledge of the fundamentals and then the ability to "deconstruct the language once you learn it, mold it turn it into something else."

He likens this type of innovative jazz to the adventure of his old sport, mountain biking.

"You're playing when you don't know what's coming, like when you're riding a mountain bike, and it's like everything is a surprise and you don't have time to think," he says.

"It's really hard to get to that place, meditation, yoga helps, when you're in that zone you think oh damn I'm gonna [screw] up. Even mistakes, it's fine when the spirit is there, you can fix them."

The spirit seems to be there when Shevelov plays. He is often smiling, in his own world while somehow also listening to the other musicians and reading the audience.

Jazz is about "telling a story," he says. "Just listen to Sonny Rollins from the 50s."

The Canadian rock band the Strumbellas have a line I heard while at a shop in Lviv the other day: "my friends ... won't know me until I know myself." I recalled this while talking with Shevelov last week, who was saying that to tell and share a story properly you have "to be the best at being you."

We have shared stories about our New York experiences - an American who escaped Gotham and ended up in Ukraine and a Ukrainian who is achieving his goals in that city so many dream of.

Shevelov's been living the real New York life even during the recent tough times. During the pandemic, with venues closed, he started playing in Central Park with friends. Their regular gigs got noticed, including in a BBC feature.

A Ukrainian surviving the streets of New York

He has also seen the shadier side of the street. Here in Lviv, I forget what it's like to walk down the streets in some American cities at night. A couple years ago, a would-be bike thief assaulted Shevelov. Then, last Christmas night, he was sitting on his stoop talking on the phone with his mom, when out of nowhere a man came and started attacking him. Shevelov fought him off.

The guy got nothing but ran away saying he'd come back to rob him later. Amazingly, the NYPD found the attacker two months later. The criminal had allegedly attacked others.

Shevelov has since moved to a new neighborhood and has no desire to leave New York anytime soon. It's the place he needs to be to learn from the best, he says. But he was willing to risk losing his graduation status when the family back home needs him.

In late May, Nicko Shevelov's aunt, Kononova Olena Viktorivna, died unexpectedly. The funeral coincided with his City College graduation recital, necessary to receive his master's. Officials told him that, even in the age of Zoom, if he missed the in-person recital, he would not graduate, at least not until 2022.

But as Shevelov told me, family comes first. He flew back to Lviv for the funeral and to assist his family in a moment of grief and turmoil. Al Foster called to see how he was doing.

Amid the difficult week, Nicko asked Yurii Sadovyy, owner of the LV Cafe jazz club, if he could use the place in the daytime to record his recital, in hopes that City College will accept it. Sadovyy said why don't we make a show of it. On Monday 24 May at LV Café, in honor of Kononova Olena Viktorivna, Shevelov led the SheveLovin quartet with Yaroslav Kazmirchuk on trumpet, Taras Kushniruk on guitar, Andrew Cohan on bass.

You can watch Tvoe Misto's live-streamed footage of it here: https://fb.watch/5ThJeKlZJb/. City College accepted this video--made with the help of the people of Lviv. Nicko Shevelov received an "A," and will soon graduate with his master's.