Podcast: Melodies and Silence can build the narrative of our lives 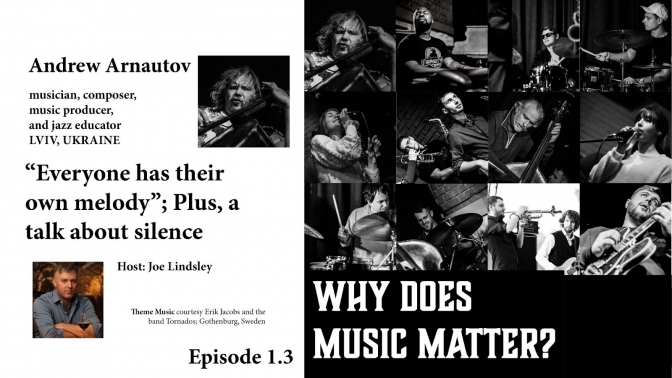 In episode three of the 10-minute-or-so weekly, Why Does Music Matter? musician, mentor, and producer Andrew Arnautov speaks with Lviv Now editor Joe Lindsley in the LV Cafe jazz club.

Arnautov says he believes each person has his or her own melody and perhaps the quest is to find out what this is. He also speaks about the need for – and the difficulty in finding–silence, which leads to a conversation about finding peace in the Carpathian forests. The episode concludes with a minute of silence of sorts at the end: you can listen to the sounds of the cafe and think or not-think.

Arnautov has lived and played in New York City; Winston-Salem, North Carolina; and many other places and for the past year he has led the weekly Wednesday night jam sessions, and mentored musicians, at the LV Café.

Here you can read more about the jazz club and about some of the stars who have recently visited: «The Music of Free People in Lviv» and «Sunrise Jams with the Legends. Lviv’s New Musical Moment.»

You can see the Lviv music schedule here.

«Why Does Music Matter,» hosted by Joe Lindsley is produced by the Lviv Lab for the Activation of Democracy and released every Wednesday.

Yurii Sadovyy: «Without music you only exist, without developing yourself.»