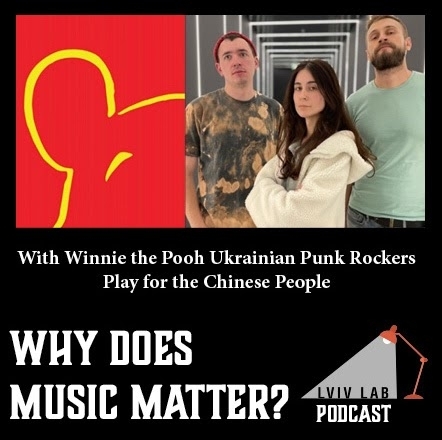 Dity Inzheneriv, or Children of Engineers, are a new Ukrainian band who quietly released last month a single in their native language, with the calm name, «Textbooks» («Підручники»). But the song, and its cover art, is a bold volley at one of the world’s most powerful regimes: It’s an image of the cartoon-bear Winnie-the-Pooh.

In China, the image of «Pooh Bear» is illegal, because dissidents have used it to criticize Chinese president Xi Jinping. Dity Inzheneriv wrote this song to remind Ukrainians not to lose the spirit of their 2014 Revolution of Dignity and to stand with those people around the world who are not free like Ukrainians today, especially the Hong Kongers, the Uighuyrs, and the Belarusians.

You can read more about the band here: «With Winnie the Pooh, Ukrainian Punk Rockers Stand with Chinese People.»

You can see the Lviv music schedule here.

«Why Does Music Matter,» hosted by Joe Lindsley is produced by the Lviv Lab for the Activation of Democracy.

Yurii Sadovyy: «Without music you only exist, without developing yourself.»

Andrew Arnautov: Melodies and Silence Can Build the Narrative of Our Lives.»