19:51 19 January 2022
Tweet
372 0
Just because some Ukrainians speak Russian, it doesn’t mean they wish to be governed by Moscow. And fact is, more and more Ukrainians are rejecting Russian in favor of speaking Ukrainian. 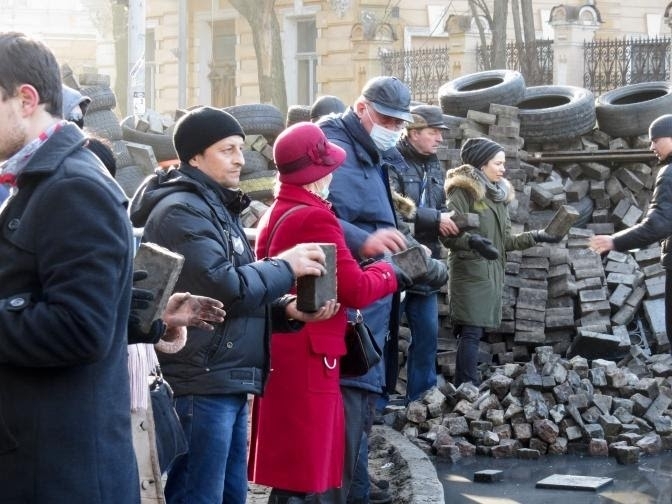 Regular Ukrainians building a barricade during the 2014 Revolution of Dignity, in which people stood in the streets during several cold winter months until the pro-Moscow regime in Kyiv quit and fled to Russia. | Photo by Euan Cameron on Unsplash.

Amid near-daily headlines that Russia is threatening a renewed invasion of Ukraine, some popular voices online are attempting to obscure Ukraine as a nation and a culture. They claim, as Vladimir Putin did in 2014 when he took Crimea from Ukraine, that if people speak Russian, they should be governed by Moscow, as though English-speakers should also be subjects of Queen Elizabeth II. This notion also ignores the growing resurgence of the Ukrainian language, a tongue long suppressed by Soviet Moscow.

«Russia is the dominant language in much of Ukraine including [in] the area [the] deep state and their CIA glowies in [the] media [and] think tanks claim ‘invaded’ in 2014. Crimea was ethnically Russians who wanted to be part of Russia,» wrote Michael Cernovitch, a popular American commentator verified on Twitter with more than 800,000 followers. «Glowie» refers to people someone suspects of being a secret agent. 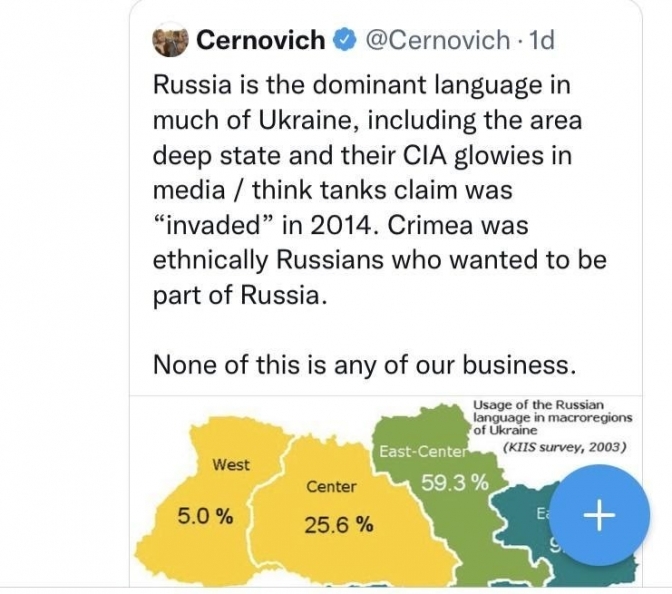 The map claimed to show that most of eatern Ukraine, and even much of central Ukraine, is chiefly Russian-speaking territory

The tweet was re-tweeted without disagreement by Pascal-Emmanuel Gobry, a fellow at Washington’s prestigious and influential Ethics and Public Policy Center think-tank. Gobry’s Twitter bio says Twitter is a space for «thinking out loud.» And indeed others responded with a good deal of criticism, including one respondent who produced a different map showing that Russian does predominate in eastern Ukrainian cities, but Ukrainian is the language of rural people throughout the country. 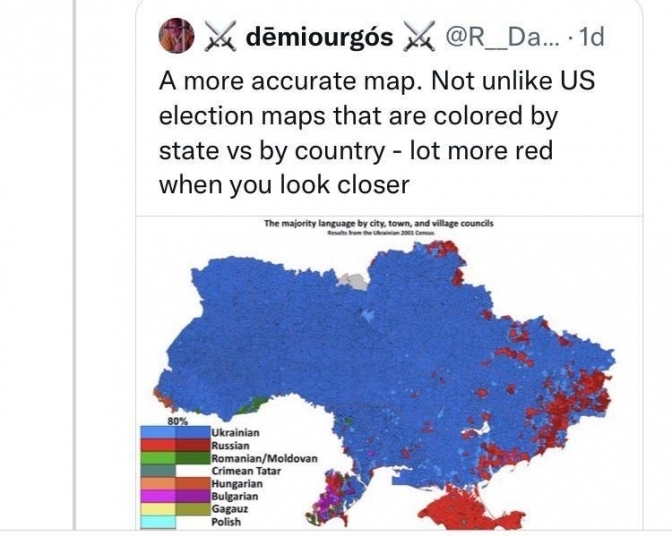 The blue represents cities or villages where Ukrainian predominates, even if it is mixed a little with Polish or Russian words.

Russian is indeed the prevailing language in cities in eastern Ukraine. This is a result of Soviet language policies, which were similar to British efforts to stamp out the Irish language. Soviet Moscow also moved people around the USSR to stifle nationalism in republics from east to west.

Despite this, the Ukrainian language thrives today–unlike, say, the Irish language–because after Independence in 1991 and especially after the Revolution of Dignity in 2014 Ukraine elevated the status of its own national language. Today much new music for example is produced in Ukrainian and for the first time the country was represented in Eurovision with a Ukrainian-only song.

The trend is for more Ukrainians to stop speaking Russian and only speak in Ukrainian. In the Ukrainian capital, Kyiv, Russian is widely spoken but among younger and more educated people, Ukrainian is in vogue.

In reporting on Ukraine the past months, I’ve met many from eastern and central Ukraine who have made the switch to the Ukrainian language. Here are two examples:

Ukrainian trumpet player Yakiv Tsvietinskyi, a former Fulbright fellow at Western Michigan University, grew up in a village near Dnipro, a city of nearly one million people, about three hours from the Donbas territory controlled by Russian-backed fighters. In the village, Yakiv spoke Ukrainian, even though his mother is Russian. When he went to Dnipro to study music, he began to speak Russian because at the time, pre-Euromaidan, that was the dominant language of higher education in major eastern cities.

But now he speaks Ukrainian once again, and so does his Russian-born mother.

«Quite recently I finally switched back to Ukrainian thanks to my wife [Marianna Tsvetinska, a soprano with the Lviv National Opera] and her support and my family. My mother [from the Ural mountain region of Russia] now speaks Ukrainian exclusively.

«As soon as the war started [when Russia first invaded Ukraine in 2014] my mother switched to Ukrainian.» At the time, Vladimir Putin, the Russian leader, had suggested that Crimea and other parts of Ukraine should be part of Russia because the people spoke Russian.

Yakiv’s mother «said if that’s the reason for invasion of a neighboring country, the language, she said she will do her best to remove this reason, eliminate it, so she switched to Ukrainian completely.»

Serhii Pukhov, a software engineer and also a musician in the Ukrainian punk band «Children of Engineers» (Dity Inzheneriv) is the son of a father with Russian heritage, born in Ukraine after the Soviets transported his family. Pukhov, whose band’s songs are exclusively in Ukrainian, limits the Russian he speaks.

«I speak Ukrainian with people I do not know on the streets but with my friends who speak Russian I still speak Russian,» he says. «I was really glad to work for six months for a Lviv company, [where] I was speaking at work only ukrainian and it was beautiful. Somehow there is still a lot of Russian language here but I think time will fix that.»

In the song «Textbooks,» Dity Inzheneriv sing in solidarity with the oppressed people of Hong Kong.

Pukhov believes that the Euromaidan Revolution gave Ukrainians a power, and set them on a completely different course from Moscow.

«In 2014 [at Euromaidan aka the Revolution of Dignity] we literally won. … When needed, we stand for ourselves,» Pukhov told me in a recent interview.