17:43 17 December 2021
Tweet
382 0
A prominent newspaper critical of oppressive regimes posts a story critical of Ukraine’s Revolution of Dignity – and then mysteriously removes the story. Amid the headlines of Russian threats, Lviv Now keeps tabs on the developing situation. 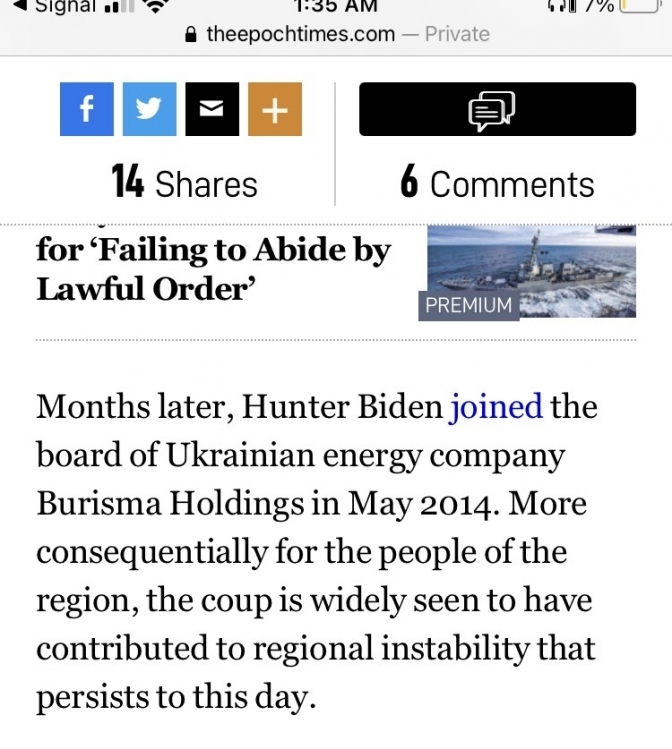 from the now-deleted Epoch Times story

The Epoch Times news website, which usually stands against tyrannical regimes, especially the one in Beijing, posted last week a story calling Ukraine’s Revolution of Dignity a «U.S. organized coup»–and then hours later, deleted it.

The posting was strange because The Epoch Times, owned by a religious group oppressed in China, unabashedly reports against oppressive regimes and in support of people threatened by Beijing, a government that also stands with Moscow against Ukraine.

The story, posted Monday 13 December, New York time, and deleted by Tuesday, focused on how a senior official working on Ukraine policy in the administration of U.S. President Joe Biden was also busy working on Ukrainian matters during the 2014 Revolution of Dignity, also known as Euromaidan.

The official mention in the Epoch Times story is Victoria Nuland, currently under-secretary of state for political affairs in the U.S. State Department, which makes her hugely influential in U.S. foreign policy.

And she has long been influential. As The Epoch Times reminded readers in the now-deleted story, in 2014, during the revolution, someone leaked a call between Nuland, then assistant secretary of state for European affairs and Geoffrey Pratt, the U.S. ambassador to Kyiv, in which the former spoke casually but passionately about who Wasington should select to run Ukraine after the revolution was successful.

«I think Yats [Arseniy Yatsenyuk] is the guy who’s got the economic experience, the governing experience. He’s the... what he needs is Klitsch and Tyahnybok on the outside. He needs to be talking to them four times a week, you know. I just think Klitsch going in... he’s going to be at that level working for Yatseniuk, it’s just not going to work.» 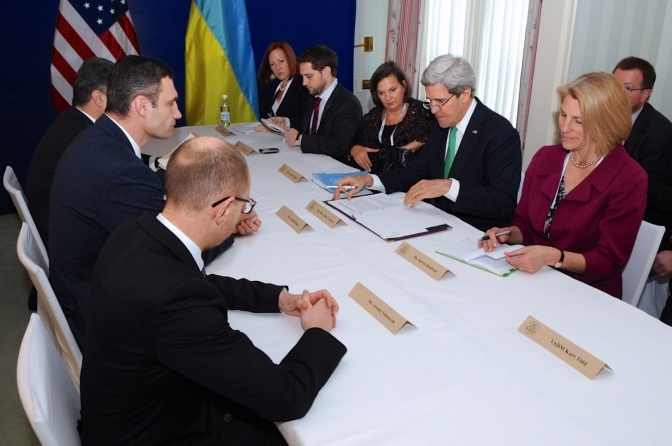 Victoria Nuland, right side third from left and next to then-U.S. Secretary of State John Kerry,, meets with Poroschenko, future president of Ukraine; Klitschko, and Yatsenyuk in Munich in February 2014, during Euromaidan in Kyiv.

This is what the Epoch Times said was an unjust coup. Indeed, the narrative that Euromaidan was orchestrated largely by the United States government is popular in some circles in the USA, especially some people and officials close to former President Donald Trump.

No one in either the Obama or Biden administrations has clearly explained Nuland’s leaked phone call.

This is also a surprise coming from The Epoch Times: They are a careful newspaper: avoiding the passive voice, which obscures agency. And despite their biases in story selection, which everyone has, they are thoughtful reporters – not sloppy or lazy and presenting the real ideas of opposing sides. And so perhaps it is no wonder that they took this story down.

But it echoes some voices on the American right who tend to be siding with Moscow over Kyiv lately. Fox News’s Tucker Carlson, the most popular cable news host in America, with an audience of 4 million or so, recently said: «​​Vladimir Putin … just wants to keep his western borders secure. That’s why he doesn’t want Ukraine to join NATO, and that makes sense.»

Personally I know many Ukrainians who were changed by the revolution: and many who stood there in the square in Kyiv and in other cities around the country. So at least they should have some credit. Perhaps the U.S. took advantage, or tried to help, once the revolution began?

The revolution did more than simply change who was president. Since 2014 Ukrainian culture has had a renaissance, and this gets missed amid all the headlines of a rumored potential Russian invasion: Thanks to a combination of laws and culture, musicians are creating more music in Ukrainian rather than Russia; more people, especially the young, are deciding to speak Ukrainian rather than Russian; and the culture is acquiring a confidence:

«Ukraine is at a romantic phase, which is why it is so powerful,» Ukrainian impresario Vlad Troitsky, creator of the successful band Dakha Brakha, told The Odessa Review in 2016. Free to forge a new identity, Ukranians are tapping into their roots and finding new ways to develop while giving oxygen and confidence to their ancient culture.

«In 2014 [at Euromaidan aka the Revolution of Dignity] we literally won. … When needed, we stand for ourselves,» Ukrainian musician Serhii Pukov told me in a recent interview.

By all accounts, Euromaidan was a revolution of the people. But Moscow, Beijing, and even some voices in America create a narrative that the revolution was a top-down, U.S.-organized coup.

Arthur Kharytononv, founder of the Free Hong Kong Center in Kyiv, perhaps better than most has chronicled the close ties between Beijing and Moscow and the attempts of both regimes to undermine Ukraine. He sees Ukraine’s greatest threat as the «red hydra of Russia and China,» two nations increasingly cooperating against the West.

Why would a newspaper so skeptical of Beijing advance Moscow’s narrative that Euromaidan was a U.S. orchestrated coup?

The Epoch Times story, now-deleted, mentioned other items that raise questions: Especially this: After Euromaidan succeeded, Burisma, the oil company with major reserves in Ukraine’s Crimea peninsula, hired the son of then U.S. vice president as a $60,000/month consultant. Meanwhile, Russia took over the Crimea peninsula and the Obama-Biden administration did little, except to issue strongly-worded statements.

And: China supports Russia’s occupation of Ukraine’s Crimea peninsula and in a 2019 oped the then-Chinese ambassador to Kyiv, criticized both the freedom-seeking people of Hong Kong and those people who would hold «demonstrations on the Maidan»–a clear reference to Ukraine’s 2014 revolution, also known as Euromaidan, because it took place on the Kyiv’s central square (maidan), when citizens decided they wanted to embrace Europe rather than Russia.

From Lviv Now: Amid Russia Threats, Why Ukraine Matters–and What’s the Real Situation

From Foreign Policy: «Biden’s Worried About Ukraine’s China Fling«: «The Ukrainians have a world-class military and security apparatus,» said one former U.S. defense official, speaking on condition of anonymity. «It’s a ripe target for the Chinese to try and go in and garner control of.»