Interview: In Ukraine-China Relations, Where Goes the Spirit of Maidan? 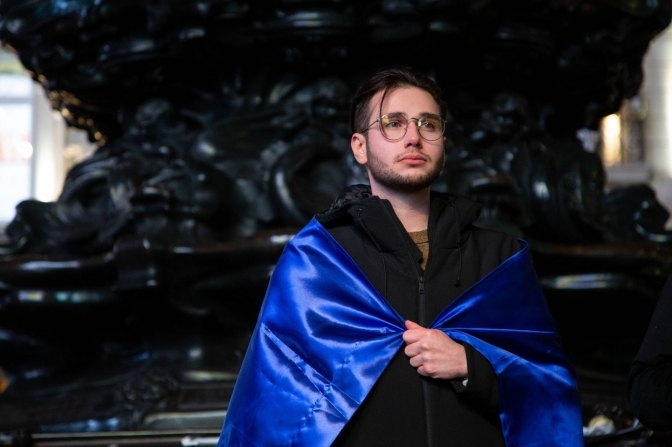 «China is doing everything to ‘synchronize’ Ukraine within Russia–to revive communist occupation from Hong Kong to Uzhgorod,» says Arthur Kharytonov, founder of the Free Hong Kong Center in Kyiv and leader of Ukraine’s fledgling Liberal Democrats.

On 25 June, Ukraine withdrew, at the last minute, from a Canada-led group of more than 40 nations questioning Chinese treatment of the Muslim Uyghur people in Nothwest China. Days later, Chinese state media praised Ukraine for «get[ing] rid of its dependence on the West.» Then, on July 4, Beijing announced it had signed a massive joint infrastructure deal with Ukraine.

Ukraine Business News noted that the deal had «slipped under the radar» of the international and local media. But these things were not under the radar for activist Arthur Kharytonov, founder of the Free Hong Kong Center in Kyiv and a former parliamentary candidate with the Ukraine’s small, youthful Liberal Democratic League, part of the global Liberal Democratic movement.

«Everything that is going on right now in Ukraine is very connected to the China topic,» Kharytonov, 25, told me. Kharytonov is perplexed why Ukraine, which suffered under Soviet communist domination for 70 years, would cooperate with Beijing, while the latter erodes the liberties of Hong Kong and, it seems, of Uyghur people.

How Ukraine once inspired Hongkongers 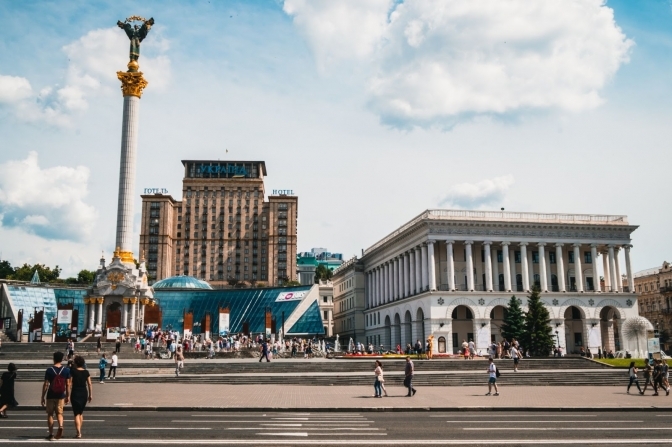 Kyiv’s Independence Square, aka, the Maidan, site of the 2014 Revolution of Dignity, or Euromaidan. Silver Ringvee on Unsplash

A lawyer by schooling, Kharytonov visited Hong Kong several years ago to research a novel he wanted to write. To his surprise, he met many young Hongkongers who found inspiration in Ukraine’s 2014 Euromaidan, also called the Revolution of Dignity. Returning to Kyiv, he created the Free Hong Kong Center, for Ukrainians to help people in Hong Kong. He’s been tracking the moves both of China’s ruling communist party and of Moscow’s activity in Eastern Europe ever since. Witnessing the Hong Kong experience, he now sees Ukraine’s greatest threat as the «red hydra of Russia and China,» two nations increasingly cooperating against the West.

In 2019 it seemed Hong Kong was ripe for a Euromaidan moment. Millions took to the streets in protest against seeming efforts by Beijing to curtail their liberty. Hongkongers waved not only American and British flags, but also the yellow and blue banner of Ukraine.

Now, those protests are silent, after Beijing in June 2020 imposed strict penalties on speech it deems unsuitable through a new «national security law.» That crackdown was in violation of the treaty China signed with the United Kingdom, which promised liberty and self-determination in Hong Kong from the 1997 British handover until 2047.

«Every day of Communist occupation, Hong Kong turns into a big prison,» says Kharytonov, who frequently makes the distinction between the people of China, whom he respects, and the «CCP»--the Communist leaders--for whom he never hides his disdain.

«After eliminating elections, prohibiting actually all pro-democratic parties, destroying the free press, and arresting more than 200 democratic leaders, politicians, journalists and activists, the People’s Republic of China took on full communization of the European city in Asia,» he says.

In a note of irony, on May 24, 2020, the Chinese embassy in Kyiv posted a statement criticizing the anti-Beijing protesters in Hong Kong. «They were openly campaigning for Hong Kong independence [and talking of] adopting constitutions on the Maidan (майдані),» with no acknowledgement that Ukainians themselves had stood for their rights in a revolution called Maidan, when 100 citizens lost their lives to the authorities. 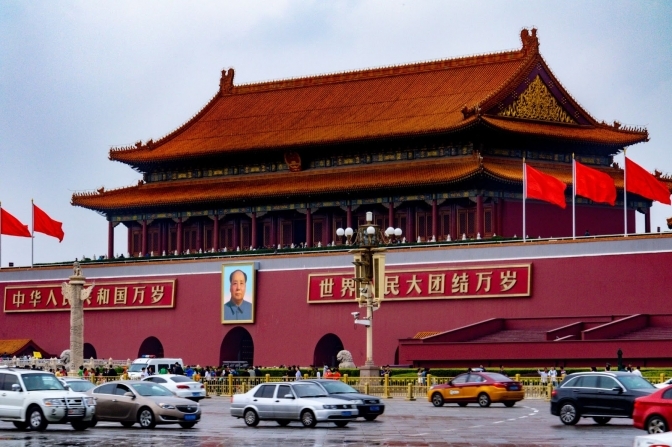 Tiananmen Square, Beijing: Site of an attempted revolution in 1989, where authorities killed hundreds or maybe thousands of protesters. Photo by Nick Fewings on Unsplash

Many nations have begun to raise concerns about Beijing’s latest moves. In June 2021, led by Canada, more than 40 countries, petitioned to the Human Rights Council in Geneva: They demanded that China allow independent observers to visit Xinjiang, the Uyghurs’ province, to see whether some form of genocide is occuring. Ukraine was among those countries.

But then, days later, on 25 June, Ukraine withdrew its signature. Some western media have now reported that Beijing threatened Kyiv they would block the shipment 500,000 doses of both types of Chinese Covid vaccines (even though, as this New York Times story reports, questions abound regarding the effectiveness of these Chinese vaccines).

Posting nearly daily on Facebook, Kharytonov has continued to document the actions of the Beijing government vis-à-vis Hong Kong and Ukraine, including:

–Ukraine’s Folio publishing house has issued a Ukrainian edition of Xi Jinping on Public Administration in China, a book with the byline of the Chinese president and general secretary of its communist party. The Chinese ambassador to Kyiv «solemnly presented» the book to David Arakhamia, the parliamentary leader of President Zelensky’s Servant of the People party, Ukrinform reported July 1 (in Ukrainian).

Also in early July, Beijing forced the shutdown of Hong Kong’s pro-democracy newspaper, Apple Daily, a step condemned by the European Parliament. At the same time, Beijing was celebrating 100 years of the communist party. Kharytonov linked on his Facebook page to the Chinese embassy in Moscow’s website, which reported that the National Symphony Orchestra of Ukraine joined a Chinese embassy event in Kyiv to honor that anniversary.

«These were evil pictures from the CCP celebrations. Communist propaganda is forbidden in Ukraine,» Kharytonov told me, referring to the decommunization laws enacted after the 2014 Revolution of Dignity (the Council of Europe, on free speech grounds, has criticized those laws, which ban communist symbols).

But, why after Ukraine’s history of Soviet oppression, Kharytonov asks, is Kyiv now looking to Beijing, which has stamped out freedoms in Hong Kong, and which carries on the communist ideology long ago defeated in Ukraine?

Kharytonov’s theory: «[Ukraine’s government] is not interested in further cooperation with the International Monetary Fund because [IMF, other western governments, and NGOs] are asking for democracy reforms, for freedom, But China is not asking for those reforms, only for more investments strategic spheres.»

The cooperation between Ukraine, the largest country wholly within Europe, and China has been on the rise and the latter is now Ukraine’s number one trading partner. In summer 2020, a new weekly cargo train even began running from Wuhan to Kyiv.

Chinese media: Good on Ukraine for rejecting the West

««If Kiev [sic] can recognize the situation and get rid of the country’s dependence on the West, the prospects for China-Ukraine cooperation are good,» Song Kui, president of the Contemporary China-Russia Regional Economy Research Institute,» told the Global Times, part of the Chinese state media apparatus.

Beijing and the universities: who will be in charge?

Meanwhile, the Ukrainian ministry of education reported that it is developing closer ties with Beijing, just as many nations are trying to pull away from Beijing’s educational influence.

In 2020, Sweden closed all Chinese-supported Confucius Institutes at universities within their kingdom. In Australia, student activist Drew Pavlou has helped create a movement of politicians and activists seeking to remove Beijing’s influence from Australian universities and Australian reliance on trade with China on the grounds that Beijing deprives its own citizens of liberty.

A debate rages in Australia whether Beijing is using money to limit free speech on campuses. The University of New South Wales, among others, censored criticism of Hong Kong’s security law.

But he’s afraid of the direction he thinks Ukraine is turning.

«What was the price of our signature?» Kharytonov says. «I have a feeling that Ukraine decided to change directions from Euro-Atlantic toward Chinese. It Is totally a violation of our values of our ideas [of Euromaidan].»

«I feel a responsibility [to write about Beijing’s efforts] because if i will stop writing about it no one will write about it,» he says.

If you wish to read more:

«The Ukrainians have a world-class military and security apparatus,» said one former U.S. defense official, speaking on condition of anonymity. «It’s a ripe target for the Chinese to try and go in and garner control of.»

From the New York Times: