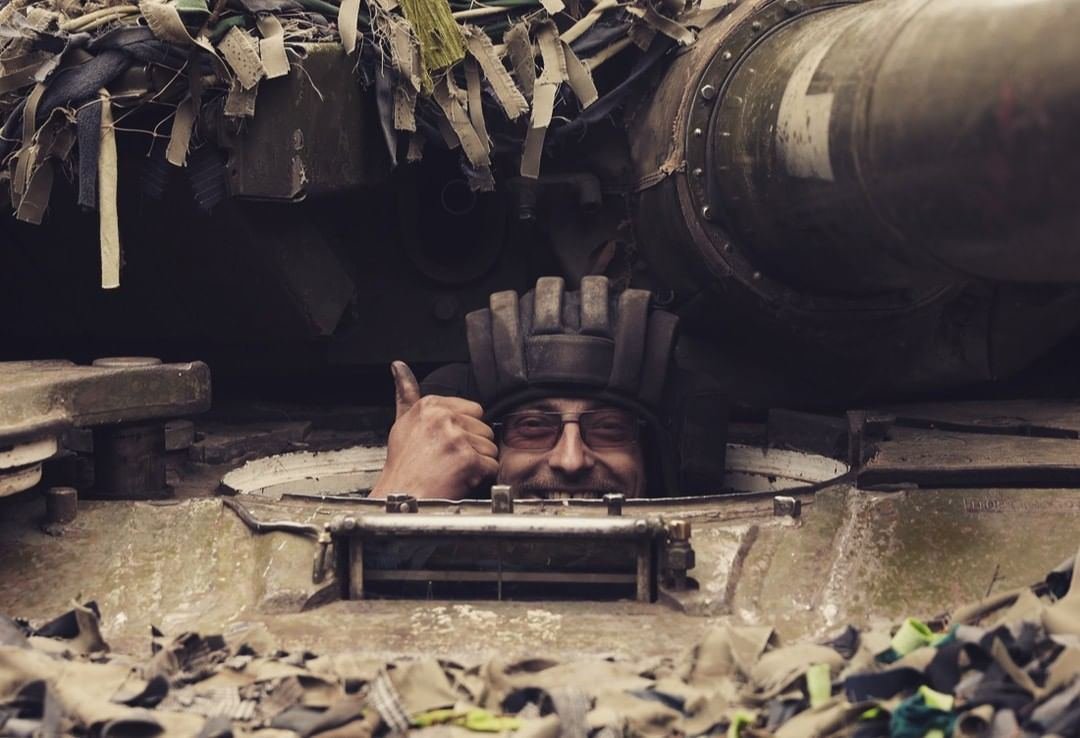 When is Ukraine to launch a counteroffensive? Interview with a military expert

Tweet
473 0
As part of the «Topic of the Week» project, we talked to military expert Petro Chernyk about the general situation on the front line, whether the Ukrainian military is receiving powerful new weapons and what to expect in the coming weeks.

What is the current situation on the contact line?

Petro Chernyk: It’s truly difficult. We are talking about more than a thousand kilometres of the front line, as we will call it, where serious and difficult battles are going on. Nevertheless, I have some strategic optimism. At the beginning of the battle for Donbas, Russia declared a huge operational arc – it’s Kharkiv, Dnipro, Zaporizhzhia, Mykolaiv, Odesa, with a land corridor to Transnistria. 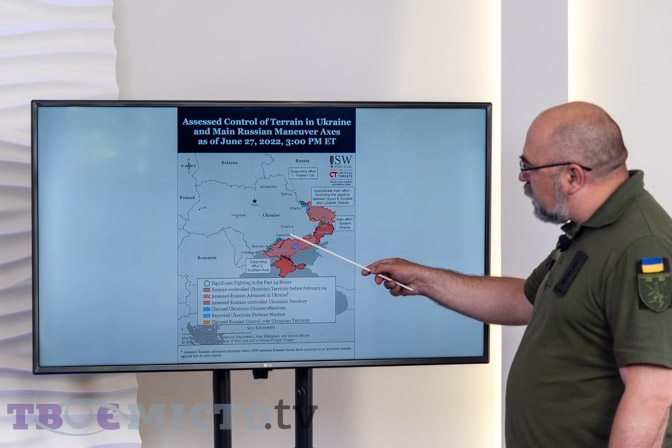 Thanks to the heroism of our soldiers and the correct military strategy, the enemy has not achieved a strategic initiative in this direction, but, by and large, is running out of steam. At this moment, the heaviest and most problematic battles are taking place directly in the eastern part around Lysychansk. We have to remind you that the enemy has declared not only a large operational arc, but also that such quasi-republics as «DNR» and «LNR» will be recognized in their administrative borders.

I would like to remind you that both Severodonetsk, which, unfortunately, the enemy has already occupied, and Lysychansk are the boundary line of the Luhansk region. The enemy must achieve at least some kind of operational success, therefore, in fact, their forces are concentrated there now, incredibly large in terms of artillery – a correlation of 1 to 20, not in our favour. The battle for Severodonetsk showed that even advancing a few kilometres forward is incredibly difficult for them. Lysychansk is a much better fortified city, it has a natural barrier – the Siversky Dinets. And despite the fact that this river has become quite shallow, it has a muddy bottom, making it incredibly difficult to carry a large amount of equipment while fording it. This is slowing down the movement, and our artillerymen have already received a large number of new weapons from Western partners and are now efficiently and accurately destroying the enemy. 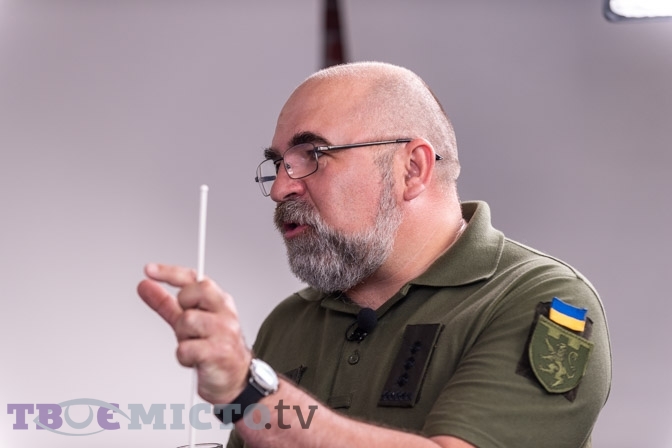 Read also: Would the Israeli Iron Dome protect Ukraine? Explanation of the experts

Here, too, I have some strategic optimism: as long as there is a so-called operational window, which I tentatively call from Yampil to occupied Popasna, and as long as the so-called «road of life» Bakhmut-Lysychansk is not completely blocked, there are absolutely all possibilities for the logistical support of our group in Lysychansk. At the same time, I admit that we will have to leave Lysychansk at some point. I would not make any tragedy out of it, because Mariupol-2 is unacceptable.

When the level of the ratio of forces can reach 1 to 30, no army in the world can withstand such a flurry, and it will be necessary to move to more prepared positions. Why should it be kept to the extreme? Because the enemy’s greatest firepower is concentrated here, which in turn will release our forces in the southern direction.

And, in my opinion, the Kherson direction is much more important, there are fundamentally important things there – hydropower facilities: cutting off Crimea from water is a serious argument for pressure on Russia in a global sense. No matter how strange it sounds, Putin did not declare the capture of the Kherson region. But if we manage to cut the water, it will increase global pressure on the internal discord between the towers of the Kremlin. The more chaos there is in the struggle for power or Putin’s attention, the better.

At the moment, in the Kharkiv Region, we have good conditions for pushing back the enemy, and as a result, a complete fiasco of their strategic plan: cutting off the entire southeastern region from Ukraine, and most importantly – cutting off Ukraine from the sea. 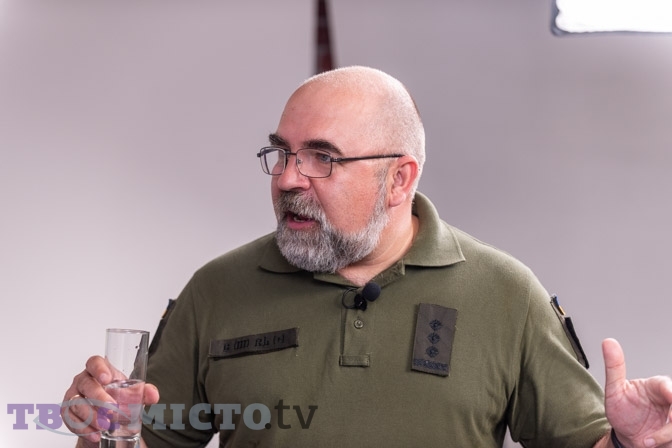 Read also: Which missiles are fired at Lviv and why not all are brought down

Unfortunately, they achieved their goal in the Sea of ​​Azov, but not in the Black Sea. Despite the fact that the Snake Island was captured (let me remind you that in a straight line from Odesa to the Sevastopol bays it is only 300 km), we definitely reached missile parity with the help of state-of-the-art missile means, namely the American Harpoon systems with a firing range of 190 to 315 kilometres, so the potential landing on the coast of Odesa is practically reduced to 0. Still, it’s not cancelled, because the logic of the Russian command, as we saw in Chornobayivka, shows that they can make decisions that are not subject to rational understanding.

I would characterize the situation on the demarcation line as a kind of tactical balance. Neither the enemy has enough means to advance deep into Ukraine, nor do we yet have enough artillery to start «firing ramparts». At the end of July – the beginning of August, when the supply, first of all, of barrel artillery and multiple rocket fire systems M142 HIMARS, M270 MLRS will reach the highest point, we will be able to gradually develop a strategic counteroffensive initiative.

A counteroffensive is a serious phenomenon that involves a serious concentration of forces 1 to 3, let me remind you, there are 146 million of them, 35 million of us. We have no right to take our soldier’s life lightly, and we have no right to claim a «Pyrrhic victory.» In fact, if we concentrated all of our forces, we could knock them out, but that would mean burning our army completely. They will regroup in a year or two and have a bad new army, and we may have problems with that. 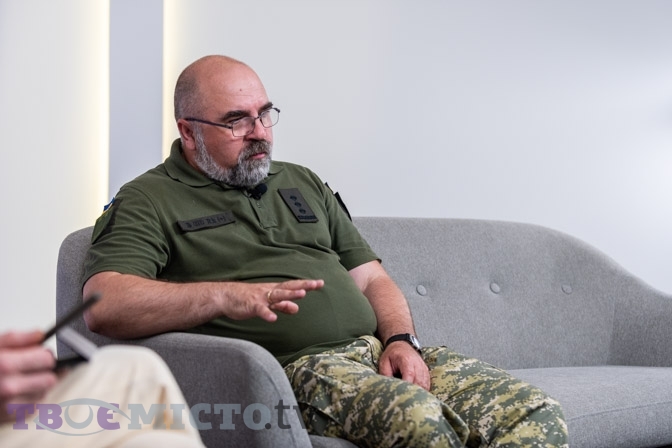 Read also: «Those who haven’t lost their limbs return to the front almost immediately.» How Ukrainian soldiers undergo rehabilitation

To what extent has the situation with receiving the new weapons balanced?

Petro Chernyk: Without this new weapon, we would be in trouble. When the enemy directly invaded Northern Ukraine and made an attempt to seize our capital, I can firmly state that without the presence of FGM-148 Javelin, LAW 80 we would have no chance to stop the enemy. Only because our Western partners helped us with these weapons, we were able to implement this unique concept of «road war». Then the weather was on our side, because the heavy equipment, a tank with a nominal weight of 48 tons, could not advance in any other way than through the roads, which allowed our small mobile groups to destroy their equipment in huge numbers. This also applies to artillery. Currently, more than 350 units of the most diverse classes of artillery have entered Ukraine: Italian FH70 howitzers, French CAESAR, American M777 howitzers, M109 Paladin, M114, and there are even up to a division of German Panzerhaubitze 2000, which have already entered Ukraine and are doing their work – this is in within 4-5 artillery brigades.

I have my own opinion that in April I did not have to dream about such a huge amount of artillery. At the same time, rejecting arguments that this is not enough, I want to say that the US army has only about a thousand units of 150 mm howitzers. It can’t be that they took everything out of their arsenal and gave it to us.

The decision regarding lendlease is a historical moment, factories are put on the assembly line, new equipment is produced, and this stream will inevitably grow. In my opinion, the critical mass of all the necessary artillery for a counteroffensive will be concentrated by the end of August. Moreover, training a high-quality artilleryman, and especially a rocketman, is a very responsible and serious matter.

HIMARS is really a cybernetic-mathematical installation, which requires serious knowledge, because its most important advantage is not only the firing range of up to 300 kilometers with the MGM140 missile, but the guidance. Almost every munition that is in the separate part of the warhead achieves its goal. It is mathematics multiplied by computer technology and cybernetics, there are many variables that must be taken into account in order to achieve the goal.

Our main strategy is to take small steps every day to destroy the enemy’s manpower and equipment as much as possible. For our adversary, technology has a sacred aspect, we remember how they always said «save technology, women will still give birth to soldiers», so reducing their combat potential is our daily task. 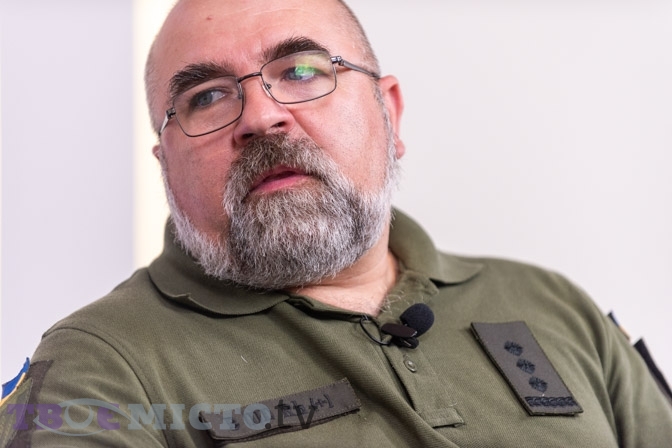 What to expect in the coming days and weeks?

Petro Chernyk: Nothing drastic will happen in the coming days or weeks. We have an equilibrium point. We don’t have enough forces yet, but they don’t have them to carry out breakthrough offensives. Unfortunately, in my opinion, the phenomenon that I would now collectively call «Kremenchuk», that is, missile volleys on Ukraine, will continue.

I will explain why such heavy missile strikes took place these days. These days, Russian troops suffered a number of strategic defeats. The first is the historic NATO Summit, at which the block will increase at the expense of such countries as Finland and Sweden, which have always maintained neutrality in relation to Russia, even in the 70-80s there was such a thesis of «Finlandization of politics», because at that time the Finns were loyal to the Soviet Union, this parity is violated – these countries will be accepted.

Read also: «Belarus is occupied.» Interview with the oppositionist exiled in Ukraine

For Putin and the last reflection of Moscow imperialism, these are very serious slaps. Moreover, the enemy cannot achieve the declared successes along the demarcation line and resorts to the only tactic he understands – sowing terror, panic and death among the civilian population. This is their classic tactic, they have been doing it since the Tatar-Mongol horde. When they cannot resolve the issue, they resort to massacres: we can recall Kyiv in 1240, Baturyn in 1708 and Kyiv in early 1919, when Shchors entered and staged a massacre, and the Holodomor – it didn’t happen differently and won’t happen any other way. The Russian state and Russians are people who have not been civilized and humanized, so they must be treated extremely seriously.