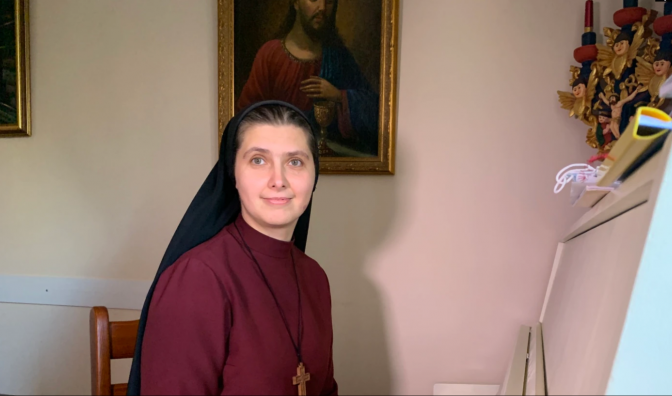 Contemplative Redemptorist sister Maria (Slepchenko) from Lviv took second place at the international competition of composers in Vienna. The prize was awarded to her musical piece for symphony orchestra, religious media «Spiritual Greatness of Lviv» informs.

The Greek Catholic nun submitted two works: one for piano and another one for symphony orchestra, which was ranked second in the music competition.

The event was held under the auspices of the Schubert Vienna Conservatory. For Sister Maria, making music is primarily related to prayer. For her, it’s one whole.

«I can’t imagine creativity without connection with God. In my case, if this connection was shaken or severed, I would automatically lose my ability to create. Because for me, it is one whole. That is, the creative process for me is a prayer process», – she explains.

Now the music of Sister Mary can be heard at the Archangel Michael Church, performed by the choir «Axios.» Sister Maria’s works are also sung by the «Dudaryk» and «Trembita» choirs. Recently, the release of a disc with the Akathist to Blessed Omelyan Kovch saw the world. The music was written by Sister Maria (lyrics by Fr. Nazariy Zatorsky), and the «Trembita» Chapel choir performed the work.

Sister Mary has long created Christian chants, as well as choral music for Liturgies. In the 90s, several CDs were released with the nun’s songs, performed by the choir «Nebesne Voinstvo» («Heavenly Army»), where the Conservatory students and the students of the secondary specialized music school named after Solomiia Krushelnytska took part.