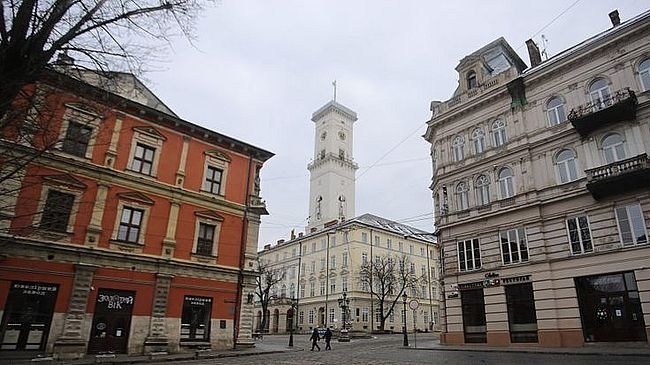 A letter from an Armenian Street café, from exiled American to a friend

«Happy birthday! Or as they say in this region, ‘mnohaya lita,’ ‘many summers,’ even if one’s birthday is the midwinter.

«Greetings from Lviv--the place I’ve stayed the longest in many, many years. It’s a city of cafés where people think, write, make music, start businesses, rebel, create. I can see just down the road from where I sit the Armenian Café, where I had strong coffee yesterday--in the style we might call Turkish, but which they call Armenian, prepared on hot sand. In an earlier time, people tell me, Soviet dissidents gathered there. When the KGB were approaching, the owners would set out baklava on the counter, which signaled «time to shut up.»

«I’m in a newer cafe now, Фацет, Faztet, which means something like ‘cool guy.’ Also on Virmenska, or Armenian Street, it’s in the old style of those dissident cafés: a narrow room in a 17th century building, black and white tile floor, high brick vaulted ceiling, a long dark wooden bench on either side, with study square and round wood tables, so as you sit at your table you can lean back and you see the people across the little room from you. It feels like we’re in a waiting room for something cool ahead. A lazy dog lies on the floor. As always, the local jazz radio station plays. People always put their coats on the stand at the door. 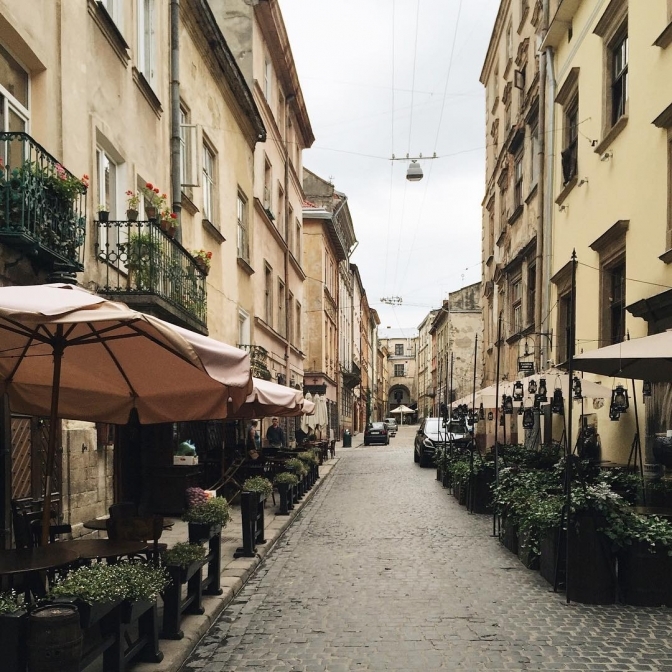 «It’s quiet now but often there are friends drinking spirits infused with local herbs or berries or toasting mugs of unfiltered dark beer; parents and grandparents and neighbors drinking wine or cider on a Sunday while their kids jump around. Maybe there’s someone in a corner making a charcoal sketch while sipping a local dark lager or a pretty girl reading a book and drinking tea, while the staff serve plates of shredded beets, potato dumplings, roast duck, rabbit, herring, liver paté, and bowls of green borsch or pumpkin soup. The language you hear generally is the melodious, or elegant, but authoritative sound of Ukrainian. But the artistic expats like to visit, too.

«A few weeks ago, with a rowdy group of local friends and a visiting girl from Austin, Texas, we took up nearly half the place. We feasted on serving upon serving of small ravioli-like things called pelmini, doused in vinegar and served with sour cream. Paintings of the Rolling Stones, Hendrix, and a Rubens copy hang above. They’re made by Andrii, who owns the place with his wife, Helena. The tall walls also host a series of old mirrors, dangling wood-moustache carvings, a crucifix and «sacred heart,» and a sign saying, in English, «My Drinking Team has a Hockey Problem.» 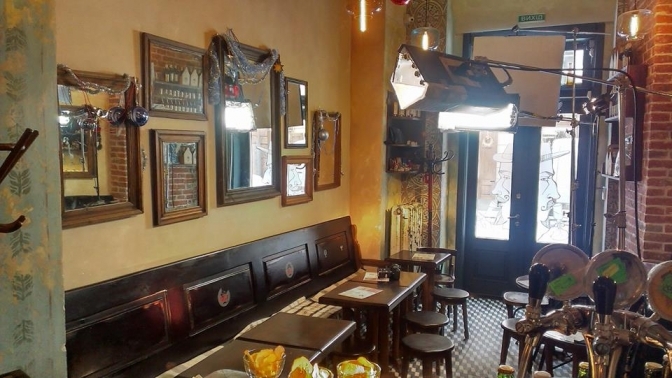 «Outside snow dusts the cobblestones and when the door opens restorative cold air gushes in. In the warmer weather, the tables spill out onto the cobbled streets. As people walk by and see friends more and more chairs crowd around the small tables. But now its deep winter, and we’re huddled inside. I’m drinking Carpthian mountain tea. When I switch to something slightly stronger, maybe a Carpathian mountain dry red wine, I will drink it in your honor. Mnohaya lita – Многая літа!»

Faztet is open every day from 11am-11pm with indoor and outdoor dining. Across the street you can visit their new sister bar-café Фацетка, Faztetka, the more femine counterpart.