The first cinemas in Lviv and movies of the interwar period. From the city’s history

15:40 04 October 2022
Tweet
250 0
Cinematography originates from the end of the XIX century and develops thanks to the technical progress and the interest of Europeans in the history of mankind. Initially, the technical and artistic elite became acquainted with cinematography, and only later did it open to the general public. The municipal enterprise «Heritage Bureau» writes about the beginnings of cinema in Ukraine and film production in Lviv. The beginnings of cinematography in Ukraine

The film industry developed in parallel in the Ukrainian lands, divided between the Austro-Hungarian and Russian empires during the XIX-XX centuries.

The history of Ukrainian cinema in the parts of the country, that were under the rule of the Russian Empire, begins with the first filming of the Kharkiv photographer Alfred Fedetskyi in 1896. He filmed the movie – «View of the Kharkiv railway station at the moment when the train with the authorities departs from the platform.» Filming took place on September 30, 1896. However, Fedetskyi’s films have not been preserved. 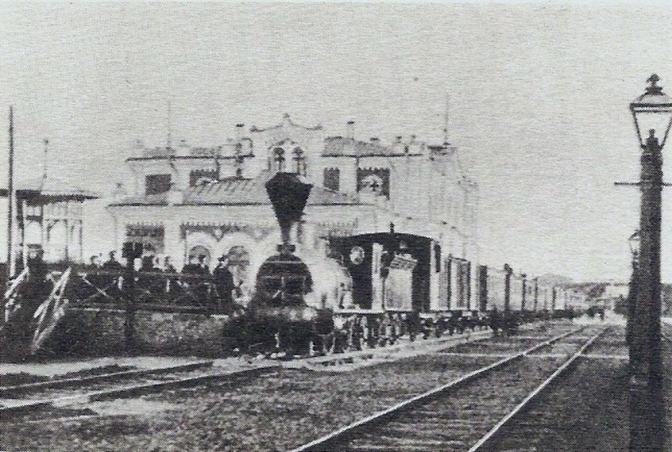 On the other hand, the beginnings of cinema in Lviv date back to 1887, when Yulian Leopold Okhorovych described the «transmission of optical images» theory and explained the principles of how a «telegraphic device for distance vision» operates. On September 11, 1896, the premises of the «Worker’s House» in Lviv (Hausmann’s Passage) hosted the first showing of a film with the use of the vitascope device, designed by Thomas Edison. Eight moving pictures were broadcast – «Fencers», «On the boulevards», «Scottish dance», «Snake dance», «Boxers», «Ship at sea», «Scene in a madhouse», «Children’s fun in the Tuileries». Admission was 50 cents.

Read also: Galician Wall Street or the beginning of banking in Lviv 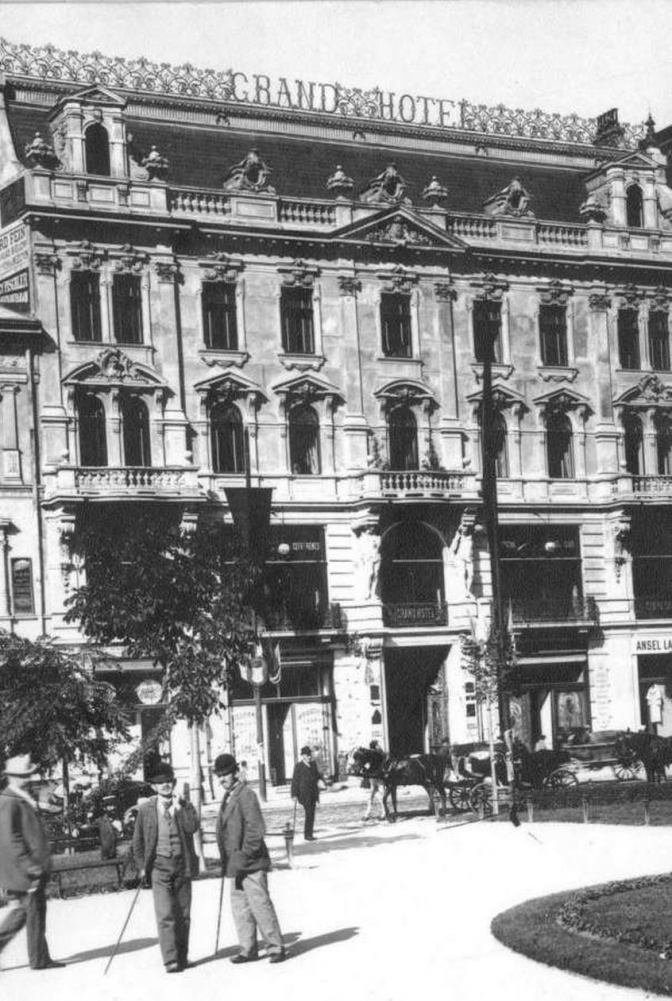 The Grand Hotel, which served as the main entrance to the Haussmann Passage 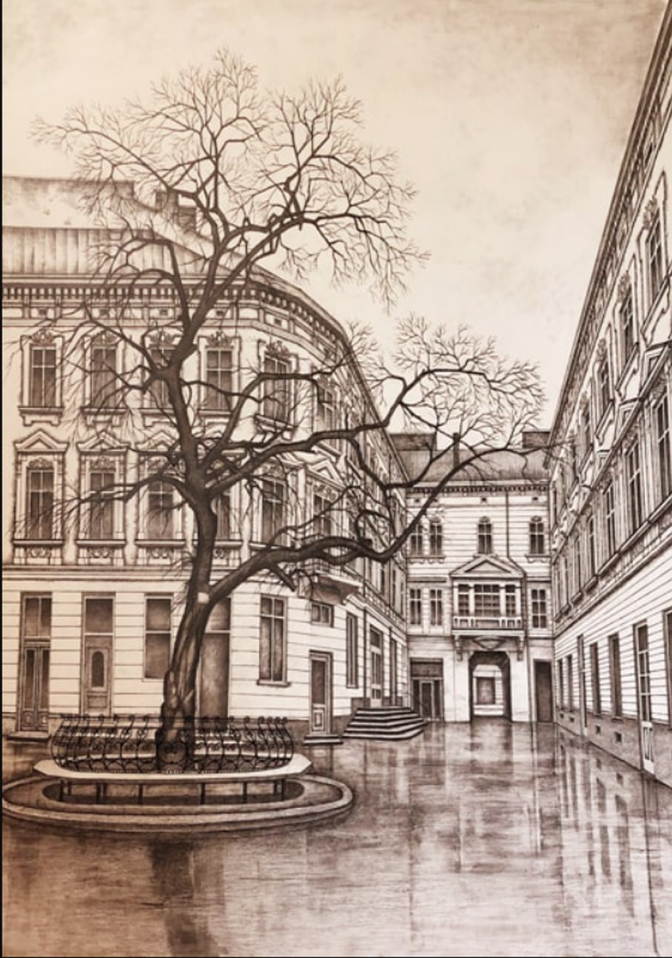 The first feature film about Lviv was «In a Lviv Cafe» by an unknown author. It was shown for the first time in July 1897 and is considered the first Lviv-themed feature film.

Significant interest in the invention of the Lumiere brothers, the presence of professional photographers, talented writers as potential screenwriters – all these factors contributed to the development of cinema in Lviv. Film distribution companies and a number of film productions were established. 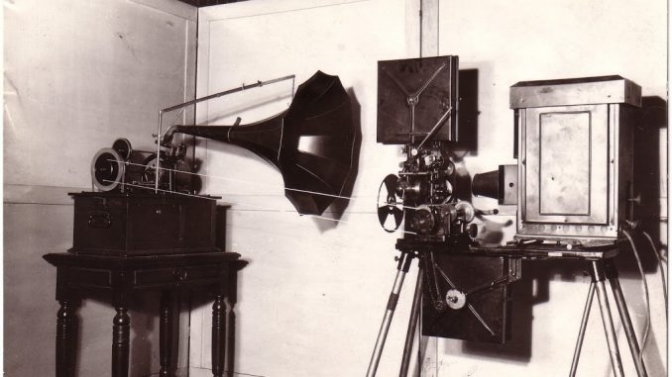 With the end of the First World War, the company was moved to a building on the street Fridrichs’, 5 (now, Martovycha St). For this reset, everything was needed to be arranged: a viewing room with professional equipment, an operator’s cabin, a photo laboratory, a rewinding room and a film warehouse. The film production facility was run by an entrepreneur Tadeusz Wolsky and the owner of the house, Wladyslav Strzeletski.

At that time, they shot short films that lasted a few minutes, with the plots depicting events relevant at that time in Galicia – «Kholmskyi meeting in Lviv», «Wedding celebrations of Prince Chetvertynskyi», «Fire at an oil refinery in Drohobych on March 21, 1912.» 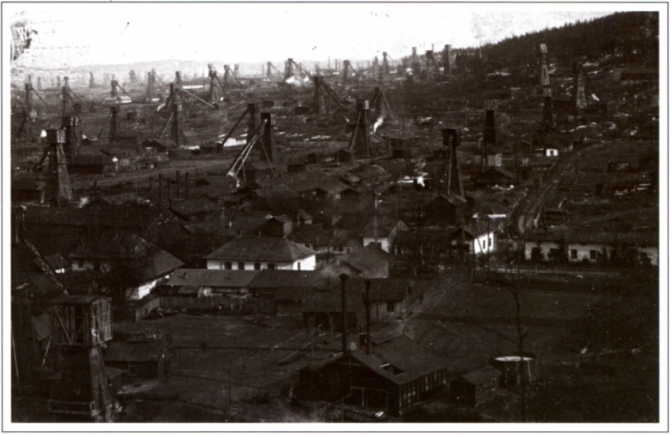 The film commissioned by the Regional Tourist Union was interesting, capturing the scenery of the outskirts of Lviv, the area above the Cheremosh and Prut rivers in the Ivano-Frankivsk region, as well as traditional Hutsul holidays, weddings, and songs called Kolomyiky.

The first shooting of feature films were taking place in the beginning of the XX century. For instance, the feature film «Daddy’s Return» (a ballad in 15 acts) was filmed in Lviv in January 1910.

Read also: Pawnshop in the cemetery, or the beginning of banking in Lviv. Part 2

In 1912, Kinofilm was established on the basis of the activities of the «First Galician Company for the Production and Distribution of Cinematographic Films» and on the initiative of the photographer Marek Müntz. The first film of the new institution was «Avenged Wrong» (1912). Zygmunt Vesolovskyi was plausibly the director of the picture.

The first cinemas in Lviv

Cinemas have been continuously operating in the city since 1901, namely with the start of work in Lviv by the representative office of the Viennese studio of films and photographic clichés «Urania», which operated in Mykolyash passage. 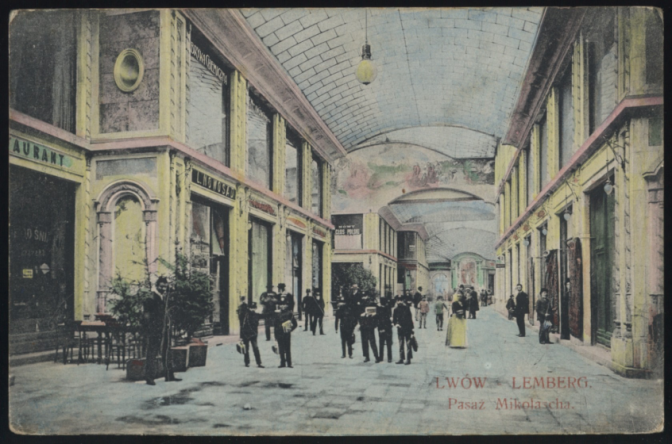 Mykolyash Passage in which Urania was located

Lviv residents began to get acquainted with the cinema en masse by traveling cinema booths or in a circus tent. Such viewings were organized by Herman Opat, Melchior Mayblum and Franz Ozer, who later opened the first stationary cinemas. Traveling film screenings often took place on the outskirts of the city. One of these places was the square near the church of St. Anna

In Lviv, there were two types of movie theaters – small camera halls where story and stunt films were shown, and large cinema halls – these were mostly concert and theater venues frequented by the intelligentsia and educated youth.

Small cozy halls served as coffee shops, restaurants with former small theater stages, which gained popularity with a new force thanks to cinema. These institutions flourished until 1914, but some of them could not recover from the First World War and did not resume their work. 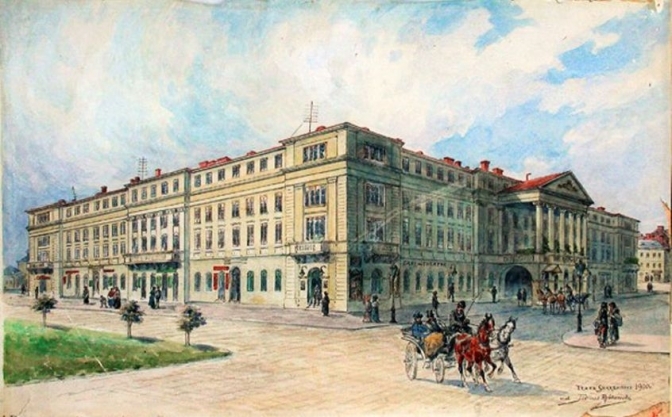 The Skarbek Theater, as well as the former premises of the Philharmonic, beg. 20th century

A significant contribution to the development of cinema in Lviv was made by Herman Opat, as a representative of the Viennese company «Uraniya». He established four new cinemas and took over two cinemas founded by Melchior Mayblum.

In 1905, and according to another version in 1906, Herman Opat founded the first stationary cinema «Sinephon» in Mykolyash Passage. Later, on the square Mariatska, 10, he founded another cinema, «Wanda». Musical accompaniment was usual for movie sessions there. Melchior Mayblum also made a significant contribution to the development of cinema in Lviv. He was the founder of two cinemas, and took over another one from competitors.

In 1907, the «Bellevue» cinema began its activity at the address of the street Karla Ludwiga, 27 (now, the central street Svobody Ave.). In 1912, Mayblum founded the last cinema in his career – «Wonderland». For the latter, he converted the premises in the building belonging to J. Grüner (20/22 Jagellonska St.). This cinema later operated under the name «Jagiellonian».

With the beginning of the First World War, most of the cinemas founded by Melchior Mayblum stopped their activities forever.

Another important person in the development of cinema in Lviv was Ludvig Kukhar, who founded the 250-seat «Corzo» cinema on Akademichnaya Square. It was the third cinema owned by this family. Previously, they became the owners of the cinema «Sinephon» in the Mykolyash passage, and founded the cinema «Lux» in the passage in 1912. The following year, Ludwig Kukhar founded another cinema, named «Lion» in the premises of the then Skarbka theater. 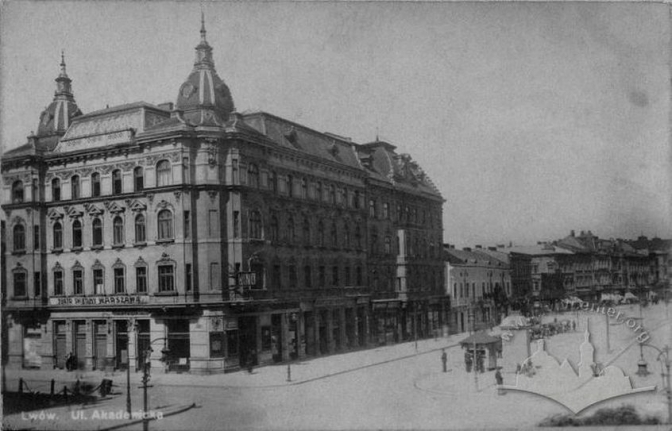 In total, in the period 1901-1917, more than twenty theaters in different places were adapted for cinemas in Lviv. Of the twenty-four cinemas in Lviv after the First World War, eight did not resume operations, the rest continued to function in the mid-20s of the last century and worked until the beginning of the Second World War. During the First World War, cinemas were centers of charity for the military and people affected by the war.

Despite this, at the height of the hostilities of the First World War, some resumed operations and were renamed «Cinemas of the Red Cross» (formerly «Frashka» and «Casino de Paris») and gave part of the profits to help the military and those affected by the war.

Films made before the First World War were mostly reportage and documentaries, and in the 1920s and 1930s, their subject matter expanded. Attention was drawn to ethnographic subjects and landscape photography. The Carpathians and pre-war Lviv appear in the lens most often. In Lviv, there were rental branches of Warsaw representative offices such as «Al-Film», «Cygielstreit» on the modern street Krushelnytskoyi, there were also local departments of «Paramount» and the American studio «Universal Pictures Corporation» on the square Mickiewicza. The rental line of Lviv cinemas was formed from these branches.

In 1923, Sonya Kulykivna established her rental company «Soniafilm», engaging it in the showing of the tapes by All-Ukrainian Photocinema Administration.

Subsequently, the film «Taras Shevchenko» by Chardynin was screened, and the funds collected from ticket sales were directed to the creation of the Ukrainian magazine «Kino» in 1930.

The themes of the films were also influenced by the Polish-Ukrainian war of 1918-1919. The tape «Tamara (Defenders of Lviv)» («Tamara (Obrońcy Lwowa)») was shot, written and directed by Nina Niowilla. In 1920, the film «Defense and Rescue of Lviv» («Obrona i odsiecz Lwowa») was released.

Two stages of the first Tour de Pologne motorcyclists’ races were also filmed in Lviv – Lublin-Lviv and Lviv-Rzeszów. The film was called «The First Race» («Pierwszy ryoszky») and was directed by Andrzej Wytrenbowych. 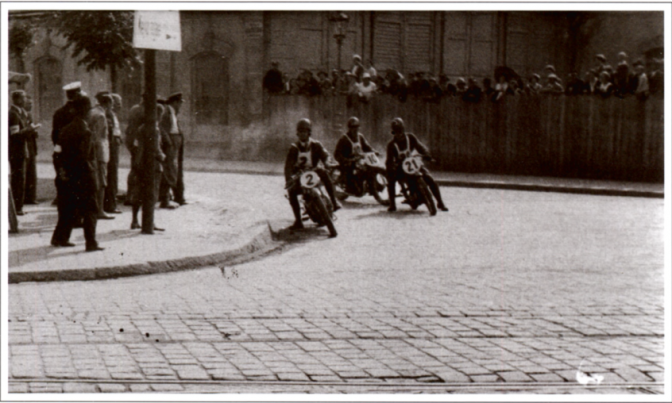 Motorcycle racers at the corner of Kadetska and Pelchynska during the 1928 race.

Read also: A Hutsul who whirled a «dzyga» of Lviv culture

In the thirties of the last century, due to the advent of sound cinema, the rapid development of the film industry continued in Lviv. The transformation of cinemas occured taking into account the new features of films. Before the beginning of the Second World War, 31 sound cinemas worked in Lviv, among them – «Apollo», «Atlantyk», «Colloseum». They planned to open another cinema – «Patria» on the street. Lychakivska, 99, but the war stood in the way. 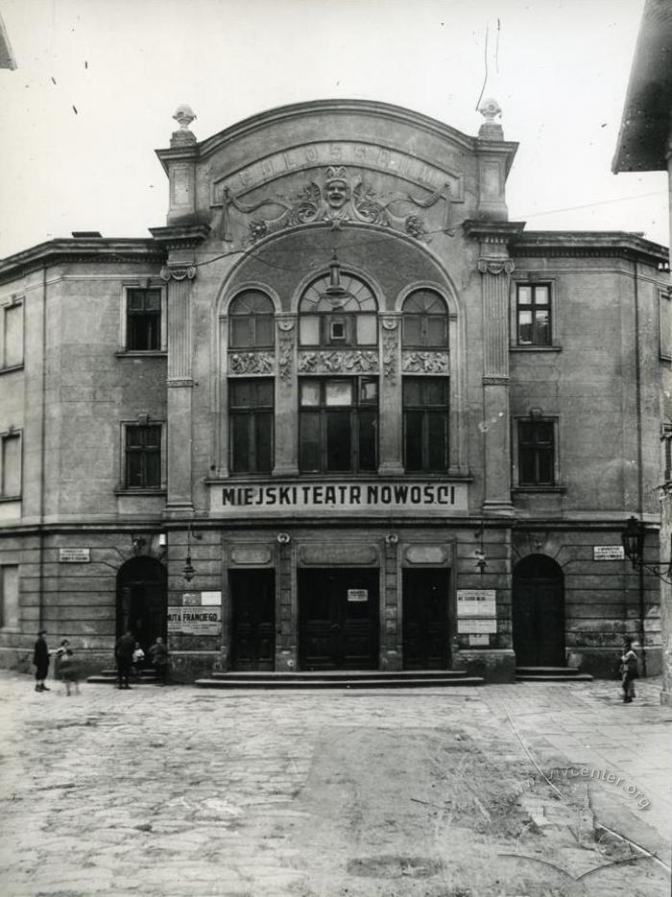 Let us recall the achievements of Ukrainian cinematographers, namely Yulian Dorosh, who shot the film «To Goodness and Beauty» at the «Photo-Film» studio with funds from Ukrainian entrepreneurs. The script was written by Roman Kupchynskyi and Vasyl Sofroniv-Levytskyi. Dorosha’s next film was not completed due to the outbreak of World War II. Dorosh filmed the documentaries Green Holidays and Easter, shot the film «Rakovets», where he showed everyday villages against the background of the ruins of the castle and the wedding day, which was watched by tourists on the banks of the Dniester.

The Second World War prevented many plans from being implemented. Although in the first two weeks of September 1939, Lviv lived in a pre-war rhythm: on September 13, Lviv newspapers printed cinema repertoires for the last time. Chronicles of the defense of Lviv, about the course of hostilities against Nazi Germany in the north of the city and the advance of Soviet troops from the east began to appear more and more frequently in their columns.