Automobile stories of the «honorable gentlemen of Lviv»

14:22 23 November 2021
Tweet
360 0
Lviv tour guide Oleksandra Dyabina tells Lviv Now about the automotive history of Lviv and the mechanical transport which was first to drive on the Lviv basalt pavement. And how more champagne was once sold in a small Carpathian town than in Vienna. 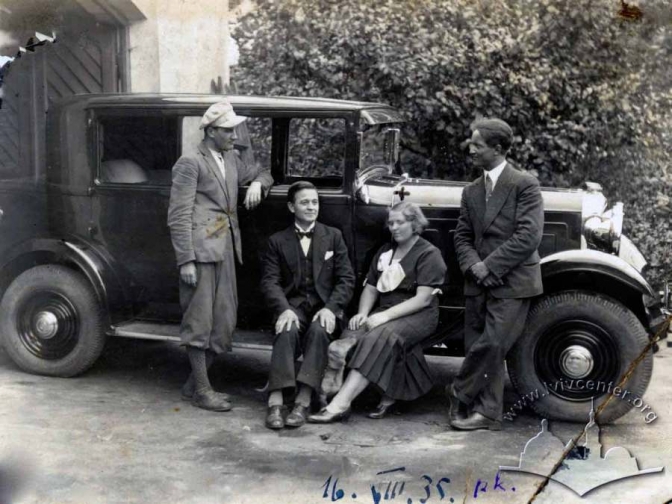 Historians claim that the first car owner appeared in Lviv in 1897. In the summer that year, four months after the first motorcycle, the car «Benz-Victoria», which later received the prefix «Mercedes», went on the Lviv streets. Now, Ukraine celebrates Motorist’s Day, or Driver’s Day annually on the last Sunday of October. Benz-Victoria car. This was the appearance of a car that first appeared in Lviv in 1897

The happy first owner of the technological miracle of that time was a 37-year-old oil oligarch Kazimierz Odzywolski. He came from a poor family, but facilitated by fortune, the man became an tycoon. After graduating from the Krakow Academy of Industry and Technology, he went to Argentina to work as a driller, later returned to Galicia, and became a co-founder of a company that successfully developed the oil business in the Carpathian town of Boryslav, which at that time was ranked third in the world’s oil extraction after the USA and Russia. At the time, local newspapers reported that more champagne was sold in Boryslav than in Vienna.

So, it is not surprising that the oil tycoon Odjivolsky bought himself an extremely rare and expensive toy, which at that time was a car and cost like a beautiful house.

The dream car of Kazimierz was sold by a representative of Benz in Carpathian Galicia and Bukovyna Leopold Pshelomsky from Mannheim. It was this man who brought a city government commission for the test drive in a car, convincing them to issue a permit for this marvel of engineering thought.

The commission was very responsible and meticulous about the new invention, a test was announced to find out how safe the car is for city residents and to decide whether to allow or ban the operation of cars on the streets of Lviv. The commission consisted of advisers and clerks to the mayor, electric tram director, police commissioner and other officials. 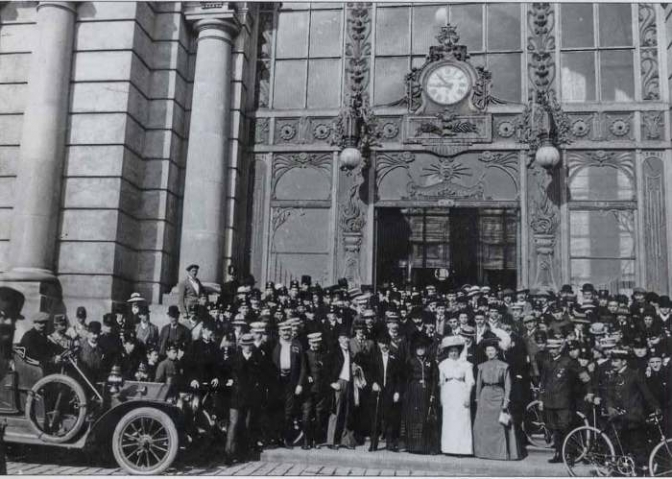 One of the first photos showing a car in Lviv. Auto Rolls-Royce Silver Guest. Photo 1907-1910

The test drive took place on Sacramentok (now – Tuhana-Baranovskoho street). Driver Leopold Pshelomsky briskly overtook horse-drawn carriages, fire trucks and pedestrians, slowed down and stopped at the command of the commission. The commission recognized the car as safe for others and gave permission to travel around the city.

From that moment, the automotive era in Lviv officially began. The speed of the then «German miracle» reached 20 km/h on an appropriate road and 17 km/h – on a bad one. Fuel consumption was 20 liters per 100 km. And most importantly: it took a lot of water to cool the engine – 160 liters per 100 km. The car had dimensions of 2.5 meters in length, 1.5 meters in width and weighed 650 kg.

If there is a car – adventures emerge. The first collision with a pedestrian took place in Lviv in September 1899 on Hetmanska Street (now, the central Svobody Avenue). Later, the newspapers wrote that the accident with the peasant Ilko Khomyak cost the driver 400 crowns, it was a lot of money at that time, for which several cows could be bought.

From 1903, road signs were introduced in Lviv, the first of which were in the form of horizontal rectangles, they warned of jagged cobblestones, uneven roads, the proximity of ditches and more.

In 1904, the first traffic accident occurred near the village of Lypnyky: a «Serpole» car overturned on the road, which caused the damage to the wrecked car, equal to the price of a multi-storey townhouse in the center of Lviv.

A year later, the first driver’s license was issued in Lviv. Engineer Tazheusz Heine became the happy owner of this novelty. He was a real car mechanic and restored an abandoned car «Benz» at his own expense.

On 7 January 1907, traffic rules were first introduced in Lviv, as well as documents for motor vehicles and registration numbers. The age requirement of the driver was determined, and after the relevant exams, any Lviv resident who has reached the age of 18 could get behind the wheel.

Traffic rules strictly limited the speed of cars and motorcycles in the city to 15 km/h, outside the city – 45 km/h, and in fog and on turns – 6 km/h.

All cars in Lviv were registered and had registration numbers.

From 1908, a clause was added to the rules to punish car owners for an unregulated engine that caused a lot of smoke.

Cars frightened horses, which were the main means of transportation, and the Lviv press was very critical of progressive innovations and constantly criticized cars, calling them «smelly monsters» and «smoke monsters.»

In August 1906, a new service – the taxi – appeared in Lviv. Authorities have identified clear parking spaces for them. These were three locations: the Opera House, Mickiewicza Square, and Bernardynska Square (Galician Bazaar). The cost of a taxi ride was exorbitant.

From the center to the end of Ivana Franka street, the passenger had to pay an amount equivalent to 500 breakfasts.

Despite all its shortcomings, cars quickly began to be used for public purposes. It was at the beginning of the century that the first trucks appeared in our city. They were mainly purchased by enterprises and shops for their working needs.

However, the city authorities were also interested in the possibilities of this type of transport, so the city ​​bought a garbage truck. Later, the Lviv water supply network also purchased a truck for its own needs. 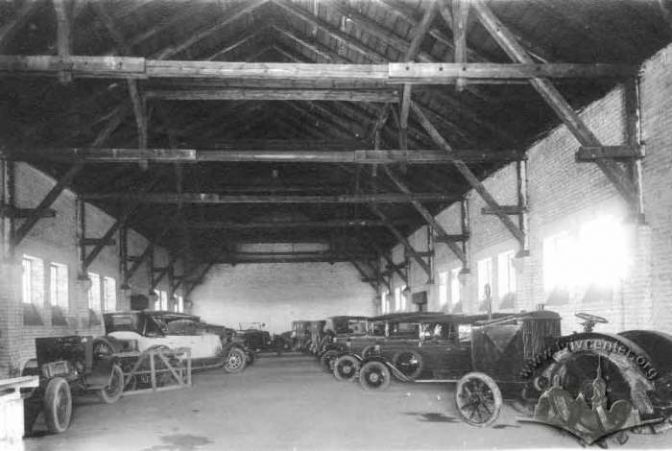 Garage of the City Cleaning Institution of the city of Lviv. Photo 1900-1914

Fire engines were also introduced in Lviv on the eve of the First World War. Until 1914, the city garage had in its arsenal more than a dozen different cars for the needs of the city. 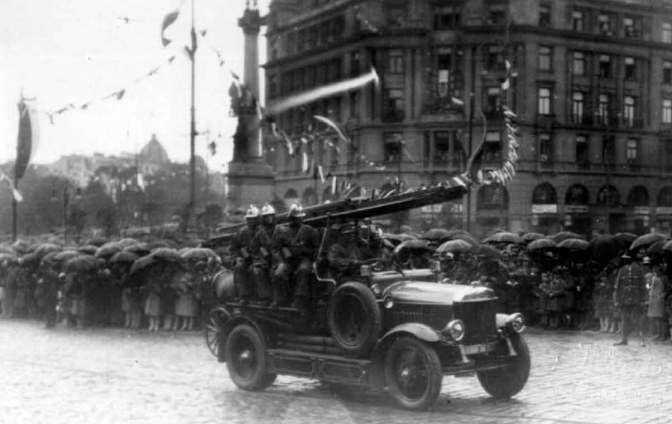 Fire truck in Lviv in front of the monument to Mickiewicz. Photo of the beginning of the XX century.

A significant influx of cars to Lviv occurred in the interwar period, technology was improved and the number of car owners increased.

During World War I (1914-1918), the first ambulances appeared in Lviv, which later continued to be used in peacetime. 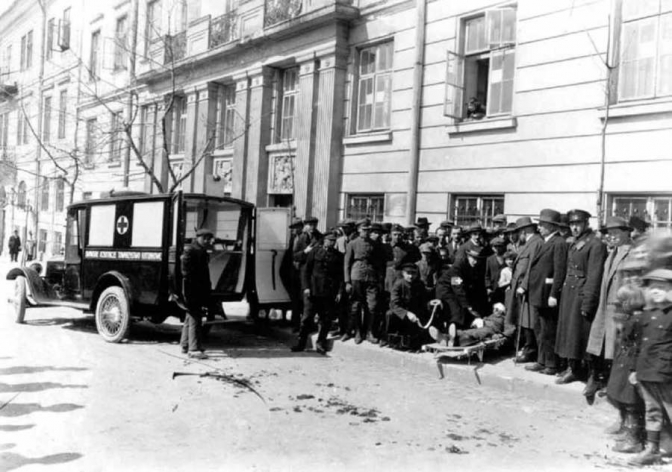 In addition to wealthy adults, cars were of interest to the youngest residents of Lviv as toys. That is why the first toy versions of cars appeared in the 1930s, in which children could proudly move through the parks and streets of Lviv with their own feet.

In 1925 the Małopolska Automobile Club was opened, the main idea of ​​which was the propaganda and development of automobile traffic. As a result of this process, real European-level car races appeared in Lviv, which later received the status of the Grand Prix.

The Lviv Grand Prix began in 1930 and lasted until 1933. In total, 4 major events took place. These were ring car races, which were held just on the streets of Lviv and had a high status. The stage was part of the international Grand Prix series, the predecessor of Formula 1. The track was conceived in 1927 – two years earlier than in Monaco, but the first competition took place a year later – in 1930.

On 8 September 1930, Lviv became the automobile highlight of Europe, the first ring races started on the streets of Lviv, which due to the peculiar shape of the route (triangle with truncated corners) were named «Lviv Triangle».

The route ran through Vitovskoho Street, Ivan Franko Square, Stryiska Street, Heroes of the Maidan. Participants had to overcome 100 laps, the length of one lap was 3041 m. This route has remained unchanged to this day. Its characteristic feature in comparison with the then European routes in Monte Carlo (Monaco Grand Prix) was the presence of a tram track (over 800 meters) and a basalt pavement with a significant difference in height, which greatly complicates the distance. This was confirmed by the most prominent riders of Europe at the time, claiming that the Lviv Triangle was the most difficult track in the Grand Prix series. 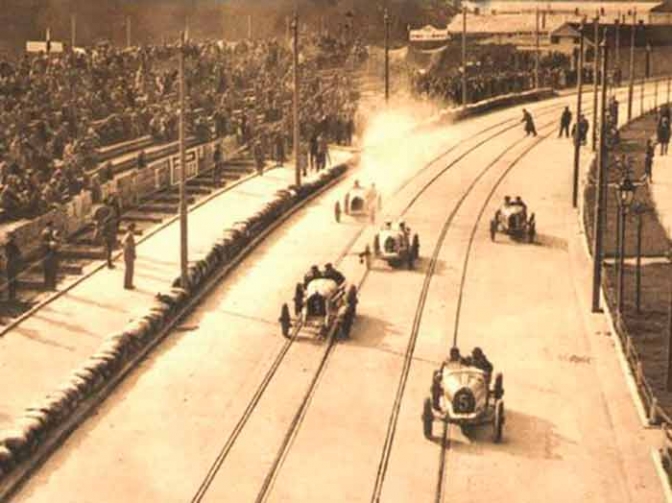 Races on the streets of Lviv. Pelchynskoho (Vitovskoho) Street. Photo 1930-1933.

Already in June 1931, the ring race in Lviv gained international status. And in 1932 they received the status of the Grand Prix of Lviv, not the country, which was a unique phenomenon, this status of the city was granted by the International Association of Automobile Clubs.

Therefore, the Lviv Triangle had a reputation as the best race track in Europe. Motorsports stars from more than 10 European countries (Germany, Norway, Czech Republic, Italy, France, Austria and others) took part in the competition. Due to the crisis in world politics and economics, the race was canceled in 1934, Europe was approaching World War II, and all attempts to resume the race were unsuccessful. 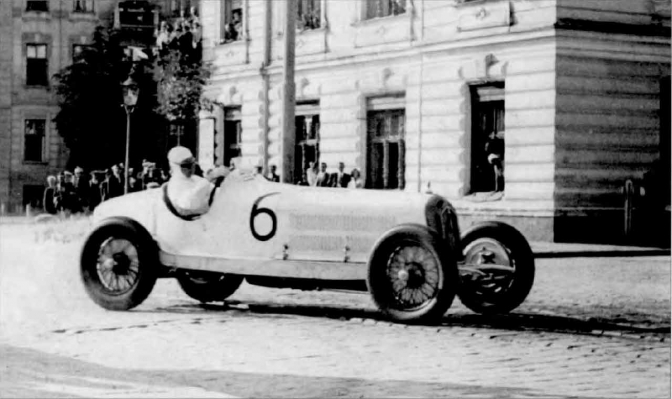 Racer Rudolfo Caraccioli on his AlfaRomeo 8C-2300 during the Lviv Grand Prix. Photo of 1932.

However, already during the times of independent Ukraine, the «Lviv Triangle» was revived and for several years in a row, a wonderful attraction occurred in Lviv – a race in retro cars.

Lviv has something to be proud of – in the automotive world, it has its own unique history and cobblestones with tram tracks, sometimes with a significant difference in altitude, and wise drivers who keep in mind all the complex geometric logistics of Lviv streets and celebrate their professional holiday today. Godspeed!