Getting to Lviv’s centre from the airport or train station: Travel advice

10:37 22 November 2021
Tweet
294 0
Here’s what to do at the airport, along with some suggestions about cash, tip etiquette, SIM cards, event schedules, and info to orient you to the city. 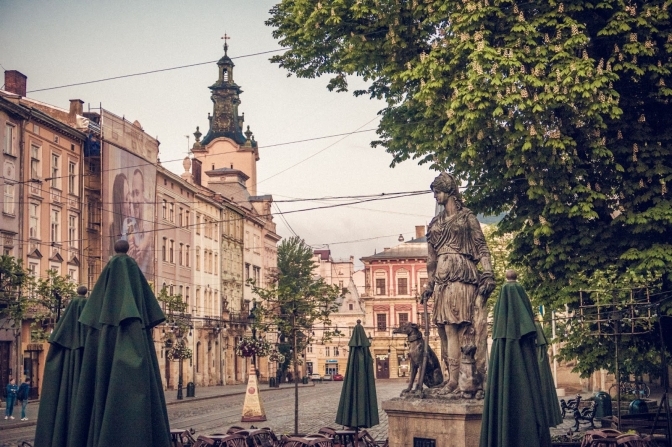 A view from a café on Lviv’s Rynok Square, at the Diana fountain, in the pedestrian heart of the old city. In this spot during the warmer months there is often tango and other dancing. The Latin (western Roman Catholic) cathedral is in the background.

Seen by many as Ukraine’s cultural capital, Lviv, with about 750,000 people, is a city of cafés, coffeehouses, themed restaurants, music, and a large pedestrian centre. It’s a gateway by train or car to the Carpathian mountains.

Lviv Danylo Halytskyi International Airport, named for King Danylo who founded Lviv in AD 1256, is 6km (3.7 miles) from the city centre. By car in normal traffic it’s about 15-20 minutes though in traffic snarls it could take up to 30.

By train, you’ll arrive at Lviv Railway Station, the Art Nouveau Voksal, a word used in Ukraine and Russia to mean railway station, in tribute to the Vauxhall Gardens in late 19th century London. It’s about a 10-20 drive to the centre.

How to get to the centre: It’s best to download in advance the Uklon – a Ukrainian ride-sharing app – or Bolt – a Lithuanian version. These offer more availability and less wait time than Uber, which is also available. The hovers around $5.

Money: You can paay by card or phone-tap at most places in Lviv, but for tips you’ll want to have cash. A standard tip is, for excellent service, 10 percent or so. You can always take out money at a bank ATM in the city instead of at the airport.

Phone service: Once in the city you can purchase a SIM card with, say, 20 gb of data for about $4 at places such as Lifecell, which is good for the cities or Kyivstar, which will work better if you spend time in the mountain or rural areas. Usually you pay cash for your plan.

Upon arriving in the Centre

The historic centre is largely pedestrian only. If your lodging is within the pedestrian zone you’ll have to walk a couple blocks unless you made prior arrangement with your hotel’s car service.

Language: Ukrainian is the language spoken in Lviv, and here they speak the «pristine version» of the language, considered to be among the more melodic tongues in the world. 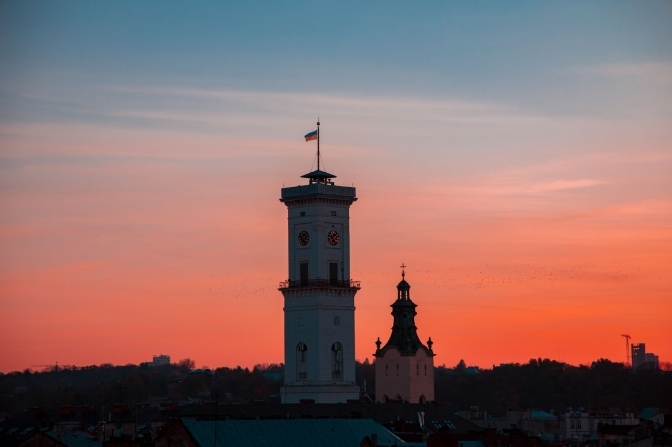 The blue and yellow Ukrainian flag flies above the white tower of Lviv city hall, in the middle of the Rynok (Market) Square. Source: Photo by Nico Benedickt on Unsplash

Many people in shops and cafés know at least a little English, though this can be a bit rusty due to the lack of use during the pandemic. Lviv is a thriving IT center, with many international events like the IT Arena, and you can find many English speakers.

Because Lviv was once under jurisdiction of the Polish-Lithuanian Commonwealth, and Poland is only 70km (43 miles) away, Polish is fairly common, spoken and on menus. The Russian language is not welcome, given that the Soviet Union controlled the city for 70 years and Russia and Russian-backed forces occupy parts of Ukraine today. One exception: Because Ukrainian lacks vulgar swear words, when Ukrainians wish to swear they use a Russian or Polish word.

Ukrainian uses the Cyrllic alphabet, like Russian, but shares more words in common with Polish.

How are you?: Як справи? [Yak spravy]; note: this really means how are you and you should expect an honest answer

Note: The greetings change for Christmas and Easter, but for the visiting foreigner the above will always suffice.

Current Covid rules: You can see the latest here in English, from Lviv Now

Lviv Expats and Friends Facebook gropp: for longer term stays (you must apply to join)

Soul & Culture: Stories about the history of this city that has been a crossroads of cultures and empires, as well as stories about the spirituality, café society culture, and language. Lviv is the only major city in the world that is majority Greek-Catholic: in calendar, ritual, and practice (e.g., married priests), many churches here are in the style of the East and Constantinople but rather than being Orthodox, they are in communion with Rome.

Lviv Live Music: Profiles of the musicians who live here and those who pass through, as well as schedules and reviews, including opera, folk, jazz, and street music. Every year the city hosts the Leopolis Jazz Fest, which draws talent from the world over.

Travel & Nature: Stories about the surrounding region of Galicia and the Carpathian mountains, as well as travel suggestions throughout Ukraine and to neighboring countries. The Carpathians are easily accessible by train.

Food & Drink: Learn about the cuisine of Ukrainian Galicia, starting with the basics: borsch and varenyky (dumplings)

Wealth & Democracy: Stories about Ukraine’s IT culture, civil society, natural and human resources, and geo-strategic position between East and West

Quite nice AirBnbs can usually be found in the range $30-$50 a night. The city has a few four and five-star hotels in the centre: such as Leopolis (with a spa-sauna-hot tub in 16th century cellar), the Grand Hotel (with a full sized swimming spool, multiple forms of sauna and bath, etc.), Atlas, and boutique places like the quiet Rudolfo and the chic Vintage Boutique.

Just outside of the center, though still walkable, is The Citadel Inn, almost like a resort on manicured grounds in one of the ancient round towers that once defended the city; and the Kavalier, also with a resort feel and some views but out of the centre’s walkability zone. The Fest hotel, a few minutes’ walk from the center, is a good budget option.

Tweet
TAGS: Uber, Bolt, Lviv, uklon, Tourist, airport, language, arrivals, how to get to the centre, arrival, info, taxis, arriving in Lviv, tourist info, visitor info, what language do they speak in ukraine