Guide to the Cuisine of Ukrainian Galicia

10:43 26 October 2021
Tweet
436 0
Pork fat, beetroot, dumplings, mushrooms: From soups red and green to variations on the potato, here’s your guide to the food of Lviv and the Carpathian mountains.

By Joe Lindsley and Vitali Holich

When gourmands hear «Galicia,» they think of great food, but their thoughts run to the region on Spain’s northwest Atlantic coast, an area with many Michelin-honored restaurants. Ukrainian Galicia, named after the ancient capital city of Halych, has no such international renown. But this region, with Lviv at its heart, has an integral and lively cuisine, influenced by field and forest rather than the sea.

With much rain and fertile soil, it’s a place of fresh produce and, increasingly, of great potential as old traditions halted during Soviet times are revived. And because development has not been so swift as in neighboring countries, Ukraine is still a place of fresh, rather than processed food.

Here is an overview of the cuisine of Lviv and the surrounding Carpathian regions, a guide I wish I had upon first arrival here. We have included the Ukrainian words so you can recognize the items on menus. Stay tuned: we will soon list restaurants and cafés where you can try these foods.

Mushroom (гриб / hgryb): It is a popular hobby or profession in the region to go hunting for mushrooms in the Carpathian forest, a short drive or train-ride away. Ukrainian Galicia even has the sought-after delicacy of truffles in abundance. You must have a trusted local expert guide you, because the wrong mushroom could kill you. The most common and prized edible fungus is called here bilyy (білий гриб), the white mushroom, which the Italians call porcini.

Here, from the New York Times in November 2020, is a story about one of the best mushroom seasons in recent decades--and describing how mushroom-hunting is a great physically-distanced activity. https://www.nytimes.com/2020/11/29/world/europe/ukraine-mushrooms.html

Beetroot (буряк / «bur-yak»): Ukraine has applied to UNESCO for borsch, the soup made with red beets, to be considered an «intangible cultural heritage.» You’ll also encounter fresh beetroot in salads and alongside many other dishes. Some say beets are a superfood, good for liver support, fighting inflammation, and improving blood flow.

Here, also from the New York Times, is recognition of Kyiv-based Chef Ievgen Kloptenko’s efforts to promote and protect borsch as the foundation of the Ukrainian diet.

Now, the dishes and preparations:

Salo (сало): This cured pork fatback is a longtime staple of Ukrainian cuisine. Local folk wisdom and some researchers say that in small weekly doses it is a boost to good health, specifically for the liver. Ukrainians enjoy its butter-like texture without cooking it, often on dark bread, maybe with pickled cucumbers, and frequently with horilka, similar to vodka. It is usually fermented in brine and sometimes smoked.

Smetana (сметана): Similar to a creme-fraiche, Ukrainian sour cream is richer than what is normal in the United States and is served with many of the items below, as noted. If you would like something with sour cream, it is зі сметаною / zi smetano-yu without would be: без сметани / bez smetany.

Borsch (Борщ): This red soup might be the soul of Ukrainian Galician cuisine, as central as gumbo is to the people of Louisiana. Its essence is red beetroot in a base of bone broth. Often, except for times of fasting, it includes a chunk of tender pork. Customarily served with sour cream (smetana), it turns bright pink when you mix it. Different micro-regions, restaurants, and households have their own variations. Kidney beans and dill are commonly added. Ukrainians say it pairs well with dark bread and salo.

Ukrainian chef Eugene Kloptenko, based in Kyiv, has been working to promote borsch as Ukrainian, in the face of Russian efforts to claim it for their own (link to Washington Post story). 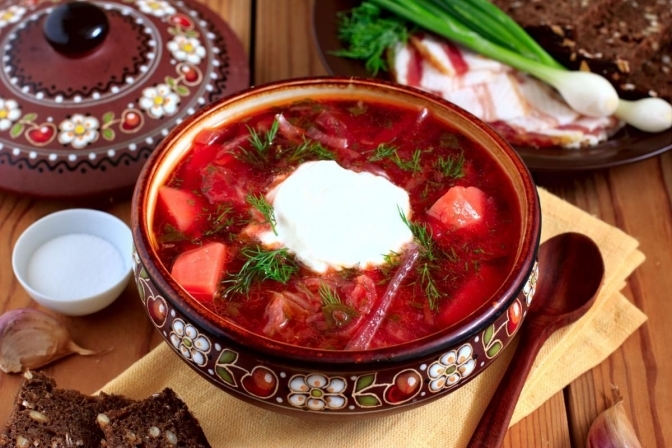 Green Borsch (зелений борщ; суп з щавлю): Also called sorrel soup, this usually warmer-weather dish is made with a spinach-like leaf. With a fresh, slightly sour taste it is often served with a poached egg and sour cream. 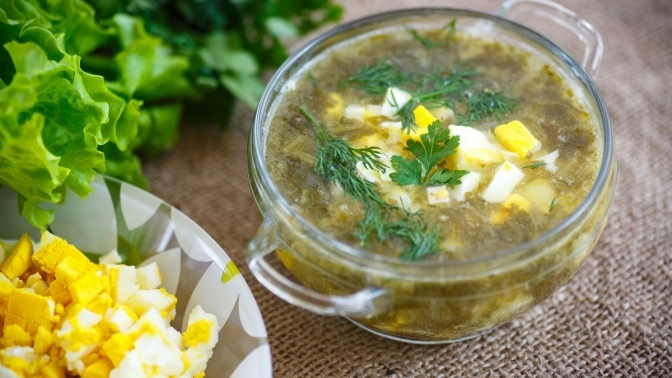 Varenyky (вареники): These dumplings are made with unleavened dough and either egg or fermented milk, wrapped tightly around a savory or sweet filing, creating a soft, pillow-like texture. Common fillings include these variations, not usually combined: mushrooms, potatoes, potatoes and cheese, cheese, cabbage, beans, meat, or buckwheat.

Served with smetana, varenyky is often lightly topped with fried onions or salo (pork fat). The sweeter variations are filled with such things as local sour cherries or blueberries. The Polish version of varenyky is called a pierogi, a word you will sometimes see in the hinterlands of Ukrainian Galicia.

Deruny (деруни) – Shallow-fried potato pancakes – often with a creamy, doughy texture-sometimes served with a topping such as mushrooms or pork in a creamy sauce, or simply served with sour cream (smetana). You can also find more elaborate variations: say, deruny with salmon tartare, with mozzarella and tomato, or almost topped like a pizza with a variety of ingredients.

Hgrechka or Kasha (Гречка чи каша): This is buckwheat (hrechka) porridge (kasha), often baked or boiled in water or milk, and sometimes simply soaked overnight in water. You’ll often see it with mushrooms and onions. It is considered a healthy staple of the Ukrainian diet, something that can be eaten for any meal.

Hgolubtsi (Голубці): These cabbage rolls are stuffed with either minced pork or beef; onions and carrotsl; or mushrooms–always with rice, and often served with, of course, smetana.

Syrnyky / thick pancakes (сирники): Popular as a breakfast or dessert, these are sturdy but soft cottage cheese pancakes, with flour, eggs, and sugar, served with jam or sour cream

Ukrainian Crepes / cottage cheese pancakes (налисники / nalysnyky): Thin pancakes with a cheese filling, these are a lighter variation of syrnyky. Crepes without cheese are also popular.

Other popular things to eat in Ukrainian Galicia

Pelmeni (пельмені): These are ravioli-like little dumplings, containing minced meat or mushrooms (but usually minced meat). Seeming to have originated in Russia, they were popular during Soviet times. On eastern Christmas Eve (January 6), Ukrainians prepare something similar to pelmeni, called little ears—vushka—stuffed with mushrooms and deposited in the special fermented holiday borscht.

Zrazy (зрази): Originating in Lithuania, the Ukrainian version of these soft potato cutlets is stuffed with meat, cabbage, or mushrooms.

Bograch (Бограч): A popular dish in the Ukrainian-Ukrainian Transcarpathian region, its name is the Hungarian word for cauldron. It contains, veg, three types of meat, red paprika, cumin, and little dumplings. https://chizay.com/en/bograch/. Ukrainians sometimes recommend this after a late night. 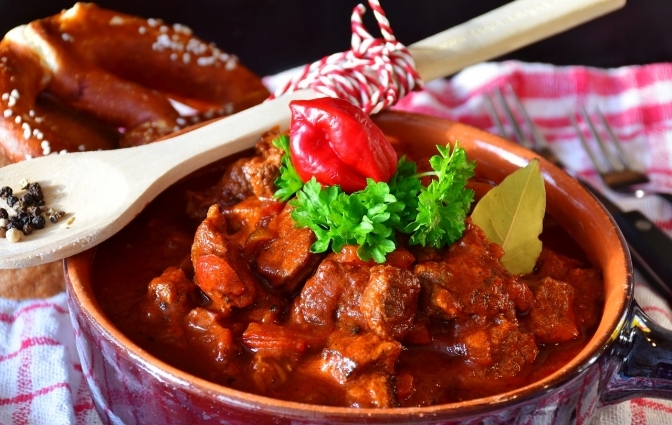 Snails / Ravliky (Равлики): Ukraine exports snails from Galicia to France. So they must be good.

Shuba (шуба): Often found at neigborhood bodegas, this is a layered salad of veg and fish, usually hearing, often with beetroot, mixed with eggs and mayonaise. Its strange name means «fur coat.»

Shashlik (шашлик): Ukrainian barbecue, shashlik is always marinated pork, cooked and served on a skewer with onions. Many homes with yards or gardens, and some restaurants, have outdoor huts for barbecuing.

Kholodets (холодець) – This animal bone broth gelatin contain pieces of meat--a wobbly sight to behold. And it is nourishing: Filled with collagen, this dish is supposed to be good for bones and joints. Called by the unappealing name «aspic» in English, it is known as chaud froid»hot cold» – in French, because the after cooking and thickening the meat broth you cool it so it becomes a jelly.

Pickled Herring, dark bread, and onions (herring: оселедець): Inexpensive and nutritious, this cured fish is popular tavern food in Galicia, but it’s also symbolically eaten at the Christmas holy supper. Pickled herring is popular also in other European countries including Sweden, Lituathania, Czechia, and Russia. You sometimes will see it called a «Baltic sandwich.»

Forschmark (Форшмарк): Originating from Jewish-Odesan cuisine, this is a spreadable paste with herring, bread, eggs, sour cream, and onions. Ukrainian Galicia is home to many Jewish food traditions which, after immigration to Israel, has also affected Israeli cuisine.

Olivier (Олів’є): This holdover from Soviet times is a salad that includes some meat--say, chicken, eggs, pickles, potatoes, and mayonnaise. Chef Kloptenko, mentioned above for his promotion of borsch, is a critic, somewhat cheekily, of this Soviet salad; he calls for more innovation based on natural local ingredients. But it’s popular in Lviv at restaurants and prepared food counters.

Krovyanka (Кров'янка): This sausage made from cow’s blood and buckwheat is a Carpathian staple. In the United Kingdom and Ireland they call it blood pudding or blackpudding.

Buryachky (бурячки): Called by some «Ukrainian wasabi» this is a paste of beetroot and horseradish, most commonly eaten at Christmas and Easter and considered a soothing, sharp, and tasty digestive aid during elaborate holiday feasts.

Hgalushky (галушки): You could call this Ukrainian gnocchi: soft flour dumplings filled with mountain cheese and topped often with a mushroom sauce.

Liver (печінка): From various animals, including fish, liver is a common dish in Ukrainian Galicia, served often as a paté (паштет).

And a lesser-known strange bonus:

Rubtsi (Рубці): Amid the outlying Soviet-era neighborhoods of Lviv -- called Sleeping Cities -- you will find a few hidden-gem «Rubtsi» cafes, unknown, like this dish of tripe soup, to many locals.

The rubtsi cafés serve traditional Galician food like varenky and deruny but their focus is this curious dish, which in Naples is considered an autumn delicacy. Called flaki in Poland, ruptsi is a soup made with tripe, which is the stomach of a cow, pig, or sheep. It has a deep earthy, mushroomy, funky texture and smell--and is not for the faint-of-heart, though, because it is packed with nutrition like all organ meats, many say it is good for your heart.

And what about desserts, drinks, and all the other things not here?

In separate posts, we will inform you on other aspects of the cuisine of Ukrainian Galicia, including types of cheese, varieties of desserts, types of liquor and liquid refreshment, and special food eaten only on holidays.