«He hurried up to live.» Ostap Lozynskyi, beloved Ukrainian master of sacred art, dies at 38 on Ukrainian Christmas Eve

09:53 12 January 2022
Tweet
496 0
One of Ukraine’s most highly-regarded artists and iconographers died unexpectedly during his favorite holiday. Led by the mayor, Lviv intelligentsia broke from their holiday celebrations to assemble in grief for a man who in recent years was on an increasingly fast-paced mission to share his art with the world. 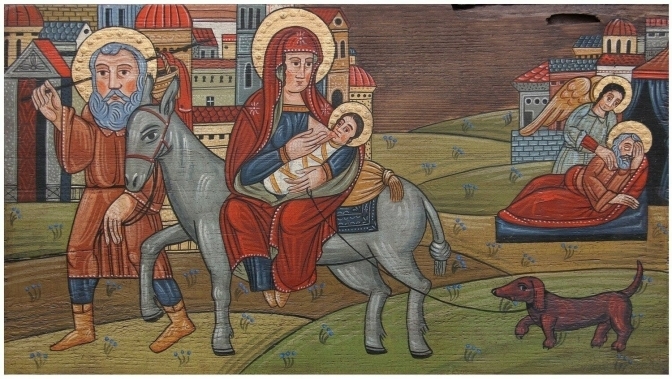 An icon by Ostap Lozynskyi

Stunned mourners packed the chapel of the Presentation of the Lord of the Ukrainian Catholic University 8 January, only hours after many of them had rung in the Julian-calendar Christmas holiday. They were gathered during a time of joy to mark unexpected grief: Ostap Lozynskyi, 38, a highly-regarded master of iconography and a much beloved friend to many of Lviv’s creative class, had died two days prior, Ukrainian Christmas Eve, from complications of coronavirus, reportedly the third time he had contracted it.

In a sign of his clear impact upon the city, Lviv mayor Andryi Ivanovich Sadovyi gave a eulogy, and throughout the region many offered tributes to him in person and online. Ostap’s whimsical, thoughtful, theological icons appear throughout Ukraine and eastern Europe and have been broadcast as a lightshow onto the Lviv Opera House. 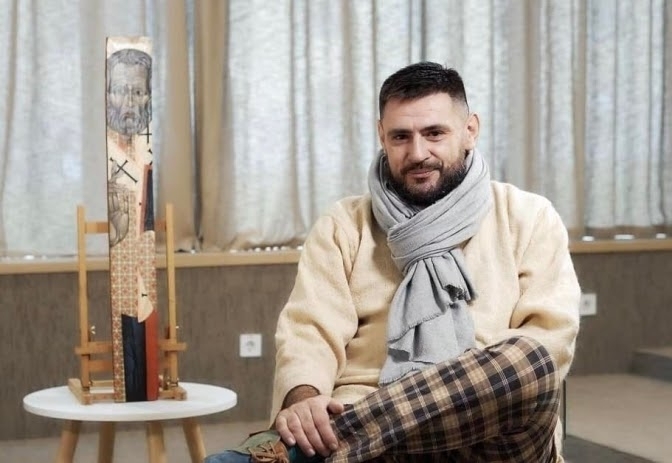 The timing of his death was especially poignant and difficult for his friends and admirers, because he was a well known purveyor and host of Ukrainian Christmas traditions.

«I think not about the death of Ostapov, but about his life, short and light, like a fairy tale, and poetic like Christmas,» wrote a friend of his on Facebook. «It was amazingly full of sensations, people, and ideas.»

Another wrote, with her Ukrainian translated to English, «To the sky of Christmas / Angels are leading him / Lviv is quiet, as if it sees / the way his icons cry.» «[Christmas] was the time he loved so much, as every year before that, he was gathering a huge artistic family in his studio to celebrate and sing carols,» says Ivanka Krypyakevych-Dymyd, a close friend who took him to the hospital on the eve of his death.

Born in Lviv in 1983, Ostap Lozynskyi graduated from Lviv College of Decorative Arts Named After Ivan Trush, and then from Lviv National Academy of Arts. From 2007, he worked as a graduate student of the National Academy of Sciences of Ukraine. He soon became one of the most beloved iconographers in a country whose eastern Christian traditions highly prize that artform.

«He dreamed of becoming director of the National Museum,» Ivanka says. «And this was not just a boy’s dream, he worked there for over ten years. Ostap knew that place from the basement to the attic, he knew all the repositories, and he was very happy there. He developed himself, wrote scientific papers, conducted restoration, having a vision how to renovate the entire museum. He wanted to turn it into a living museum, believing that the previous system was rigid, lagging behind. 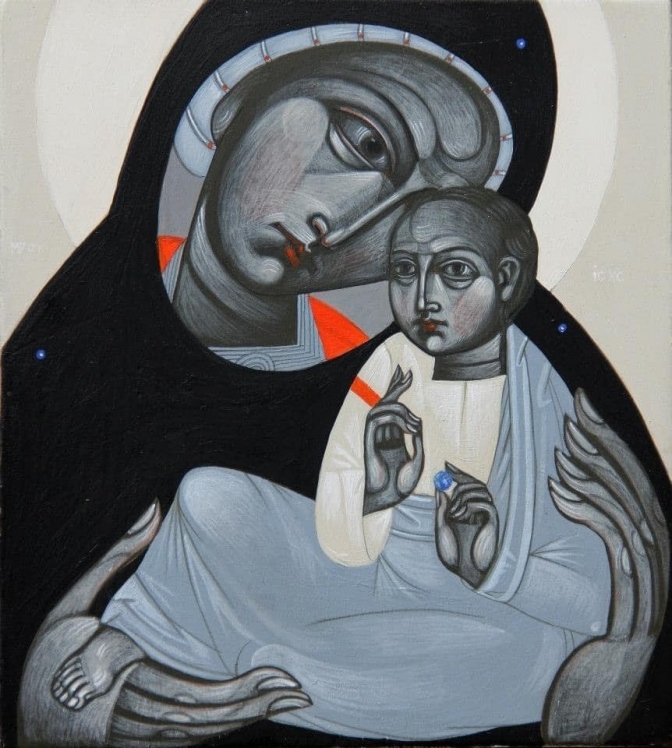 «[But] there were several dishonest moves, and he did not receive support. This is an extremely sad story, Ostap went through this very hard. He did not tell anyone that he felt upset, but he was crushed.»

At Christmas, though, it seemed no one ever could say Ostap was crushed. He seemed to live for the holiday. According to Ivankna, his hobby was cooking, especially at Christmastime.

«He made a wonderful kholodets [gelatin with meat], baked poppyseed cakes, donuts, [and he] made a couple of buckets of sweet traditional [buckwheat and poppyseed] dish kutia, and all sorts of crazy delicacies with it.»

«Then, « Ivanka says, «[he] invited everyone who could come for Christmas, and artists mostly came with their wives and children. In his workshop on Lysenka Street, no place was left to drop an apple, and it was a lot of fun.

«In order to take a photo of all those people, it took half an hour to place them all. Some climbed on armchairs, chairs, there were three or five rows. Some sat on the floor, some lay down – so that everyone could be seen. Everyone was caroling.»

An example of Ukrainian Christmas caroling

I was celebrating Christmas Day in a rural village with some of Lviv’s best musicians when I heard the news about Ostap–and when the stories and sadness began to pour out. Ostap loved to spend time in the Carpathian mountains, as many friends in Lviv told me, especially in Kryvorivna, a village in the region of the Hutsul people whose name means both «winding» and «direct.»

«Babusya Olenka who hosted him in the Carpathian village of Kryvorivna, loved him so much,» Ivanka says. «He always drank a glass with her, and made a compliment saying ‘you look so beautiful.’ And Olenka was over eighty years old. Ostap was very pious with women, with great respect. 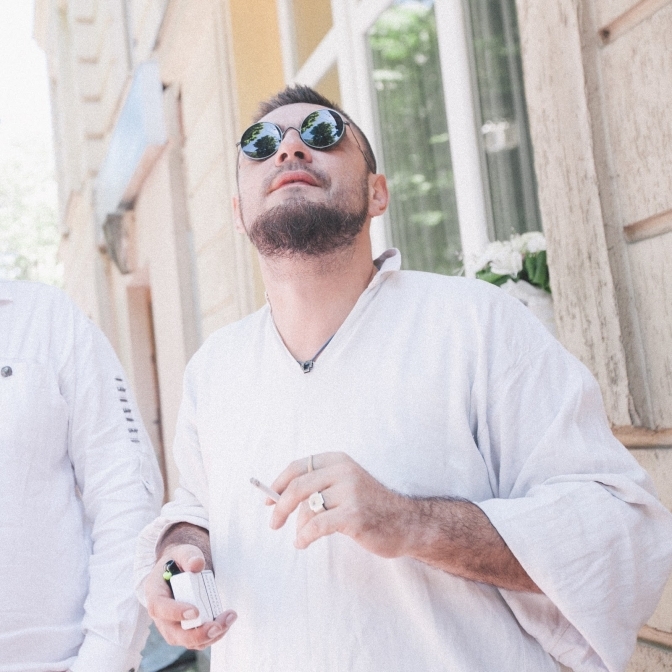 «I flourished around him,’ Ivanka continues. «I felt good. Every woman thrives when there is a real man around her. He had such a good upbringing, he could kiss a woman’s hand, give her a cloak. We worked together, I was lucky to make an order with him in the Chapel of the Presentation of the Lord at Ukrainian Catholic University, and I want his funeral to start there. He left his self-portrait on those walls, his face, as far as I know, is in one of the prophets in that chapel.»

Ivanka was the one to bring him to the hospital before he died. She also brought a relic, a hair from the Metropolitan Andrey Sheptytsky, who challenged both the Nazis and the Soviets, hoping it would keep him.

«[Ostap] was like a warrior in battle, or like a starving man,» Ivanka says, calmly, remembering the deceased friend on his last day. She speaks of his face on the last day of his life. An artist herself, she wants to paint that portrait. 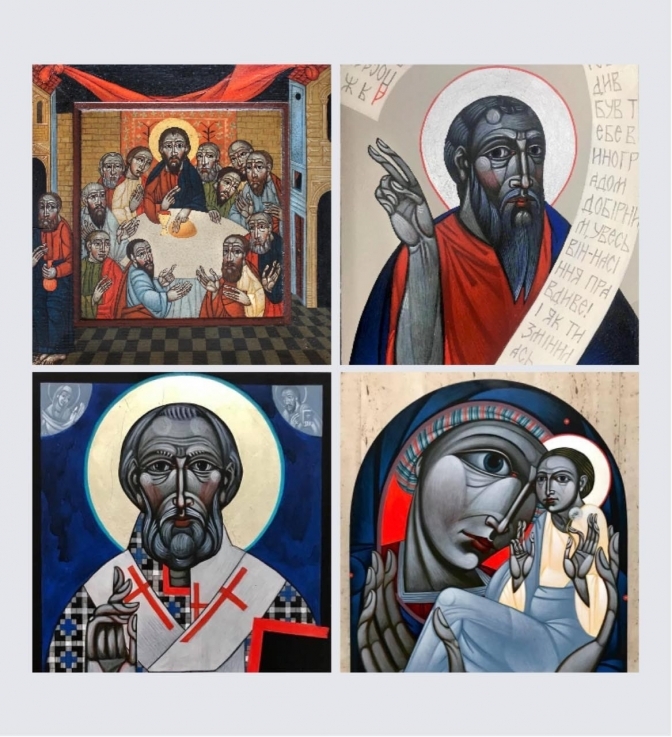 In the village of Dashava on Ukrainian Christmas Day night, a friend, the same age as Ostap, told me how Ostap had been extraordinarily productive in recent years, almost as though he saw the clock running out.

Ivanka agreed. «Ostap felt that life was short, he tried to catch up,» Ivanka says. «A few years ago, he made a very strange, strong, emotional work called «Anxiety». It was one of ten paintings in the growth of Man, which he painted in black and white only. There were very few colours, maybe a little red. This cycle was a very successful exhibition, and it was immediately bought either in Warsaw or elsewhere. But friends say that at the opening of his own exhibition in September, he was different – sad, anxious. And now they understand that he felt something.»

«Ostap was a good father for artists,» she added. «Ostap was my friend.»

He was an artist, curator, and co-curator of exhibitions and publishing projects, initiator of educational programs, workshops and multimedia products, and co-author of permanent exhibitions at the National Lviv Museum named after A. Sheptytskyi. 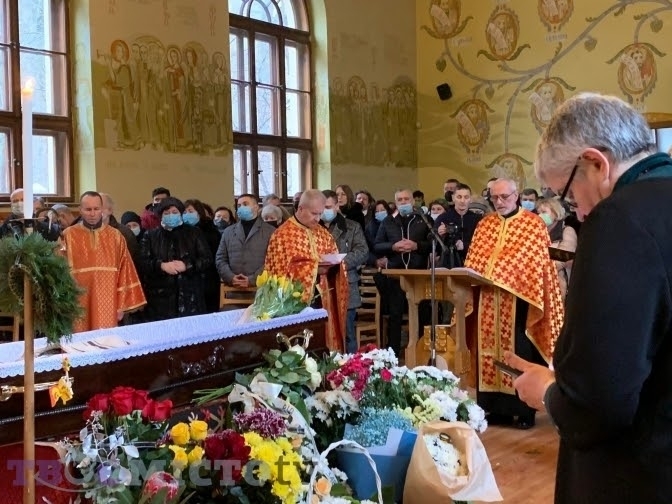 Scene from Ostap’s funeral, in a chapel he painted

Photo by Iryna Sereda for The Ukrainians