Heaven on Earth. Where to see ‘secret’ frescoes in Lviv

17:45 22 October 2021
Tweet
155 0
The Armenian Church is one of Lviv’s highlights. It stands on the route of almost every excursion in the city. In particular, it is notable for the paintings of a famous Polish artist Jan Henryk de Rosen, who lived in the XX century. However, few Lviv residents know that Rosen’s paintings are also presented in a chapel, named after him. Tvoemisto.tv spoke with Father Ihor Hnius of the Dominican Order about the frescoes painted by Henryk Rosen in the chapel. 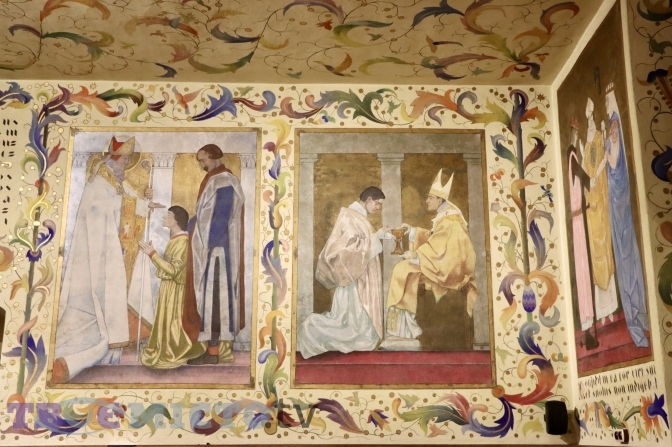 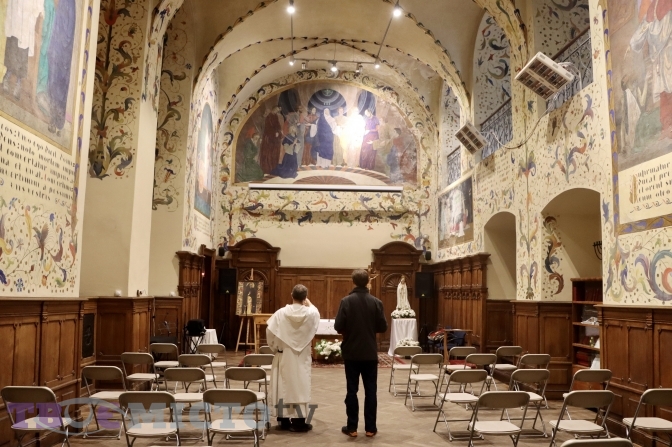 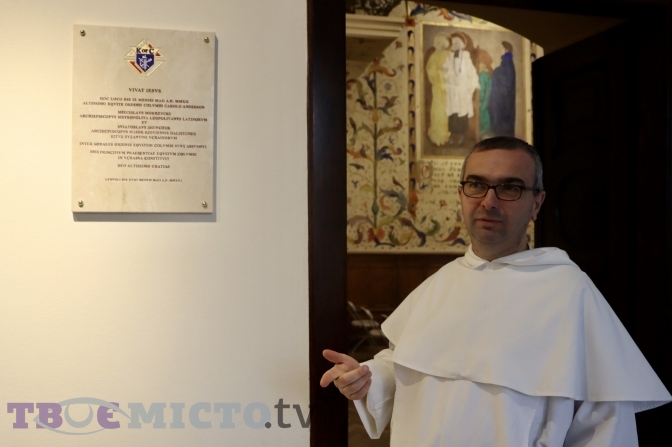 At first, this place was founded as a monastery for Carmelite sisters and belonged to the property of the Order. Its specificity was that the sisters didn’t go anywhere outside the monastery. In the chapel, they took part in the mass. 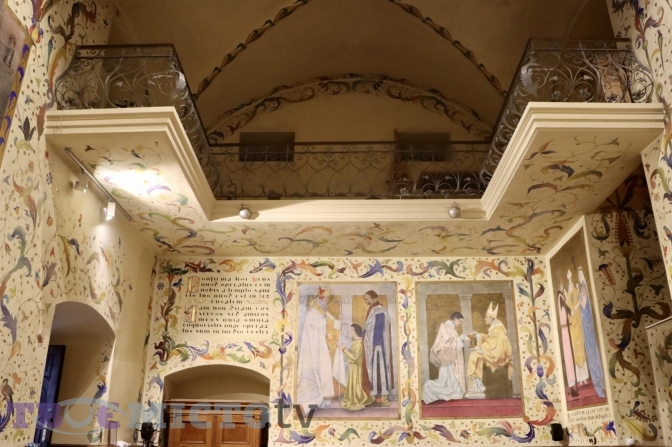 In the 18th century, the Caesarian government of Austria-Hungary liquidated all the contemplative monasteries, and shortly, the entire monastery complex with the church was transferred to the balance of the Lviv Roman Catholic Archdiocese. A seminary was arranged in the houses of the monastery. The chapel was rebuilt for its needs, and in the 1930s, the famous artist Henryk Rosen ornamented it. He was a prominent master of sacred art, who made paintings, frescoes and sketches for stained glass. Rosen worked in Lviv, Vienna, Przemyśl and Washington. 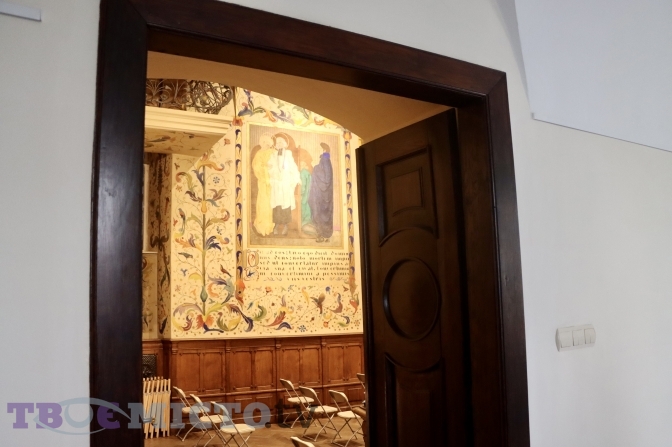 Fresco of the sacrament of Marriage

To better understand the specifics of the frescoes’ locations in the temple, we should realise that in Rosen’s time, the entrance to the chapel was located in front of the wall, where he depicted the sacrament of Marriage. That is, future Roman Catholic priests saw the couple as the first sacrament immediately upon entering the chapel. However, the fiance and bride are not chosen by chance. Rosen depicted on the fresco St. Cunegunda, princess of Hungary, and Polish prince Boleslaw the Chaste. It was quite the specific, so-called «white» couple because the man and the woman decided to live as brother and sister. They ruled the Polish-Lithuanian Commonwealth for almost 40 years. 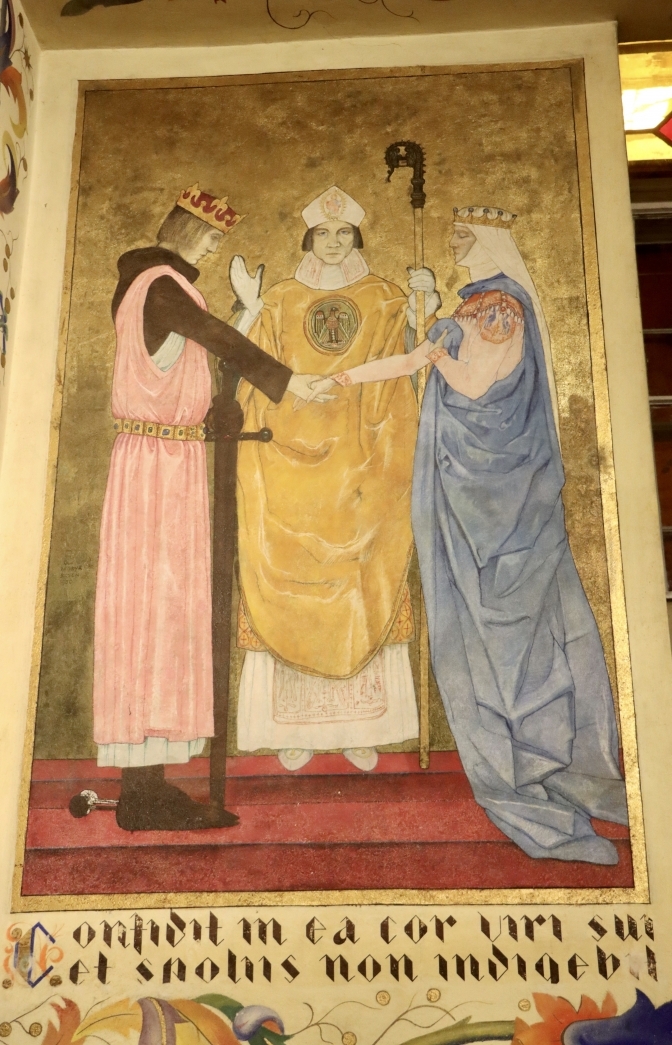 The future priests saw this fresco in the beginning, because each person and creature is called to marriage, and for seminarians, it had to show a model of disinterested love. 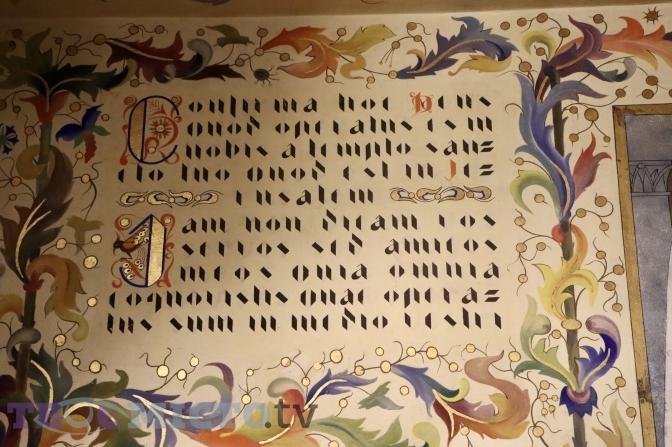 Fresco of the sacrament of the Priesthood

On the right, you can see the sacrament of the Holy Orders or Priesthood. The fresco depicts the Archbishop of Lviv, Professor of Theology and Dogmatics at Lviv University Jozef Bilchevsky, who held the chair during Rosen’s life in Lviv. In 2005, he was canonized by Pope Benedict XVI. If you look at the fresco, you can see the young priest with his hands tied in a peculiar way. At the ordination, a bishop anoints the hands of the future priest with consecrated oil and bandages them. In order not to waste the holy oil, the bandages are not thrown away, they are cut on ribbons and used in candles as wicks. Also, here is the moment of giving a bowl and a disk. It is also an important theological moment when a priest receives the instruments of his vocation since the priest is primarily called to serve Mass. 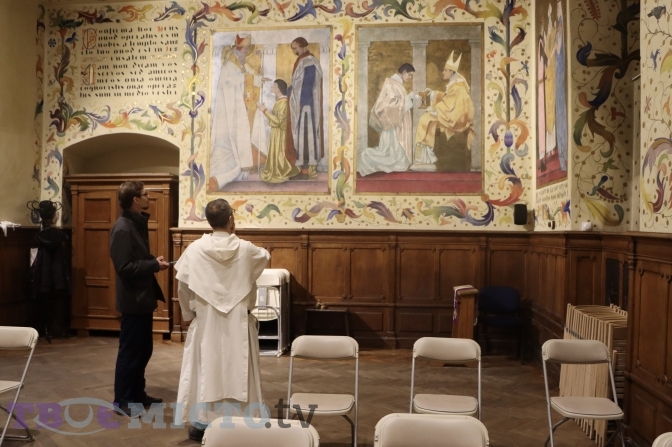 Fresco of the sacrament of Confirmation

The next fresco depicts the sacrament of Confirmation. The image of the bishop depicts St. James Strepa – the founder of the Lviv archdiocese. His memory is celebrated on October 21. The painting also shows a young teenager, because the Confirmation in the Latin rite is accepted by teenagers, not infants. Also, there is always a witness to this sacrament – the godfather. Here, Rosen showed the teenager’s thirst for the sacrament, who stretches his head to the bishop’s hand. 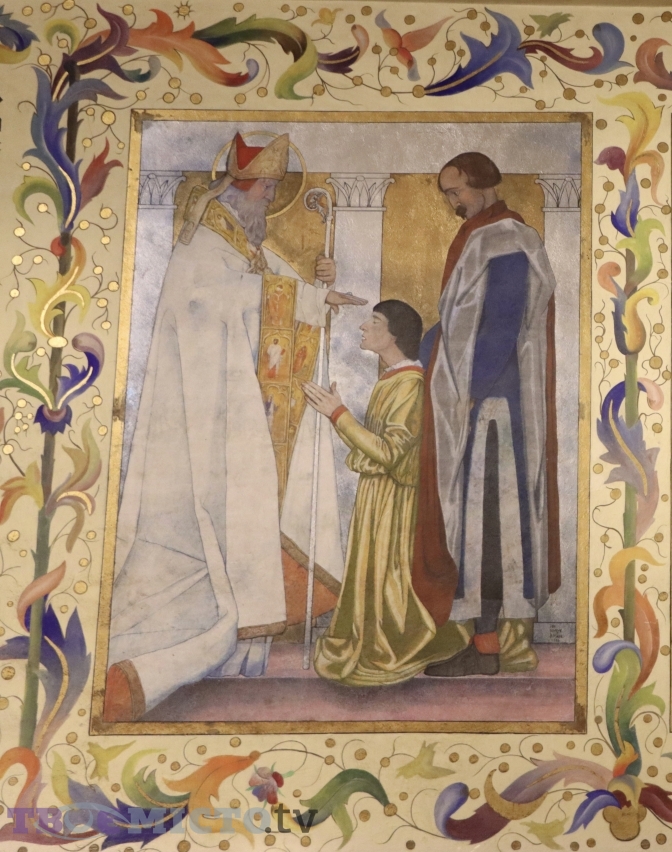 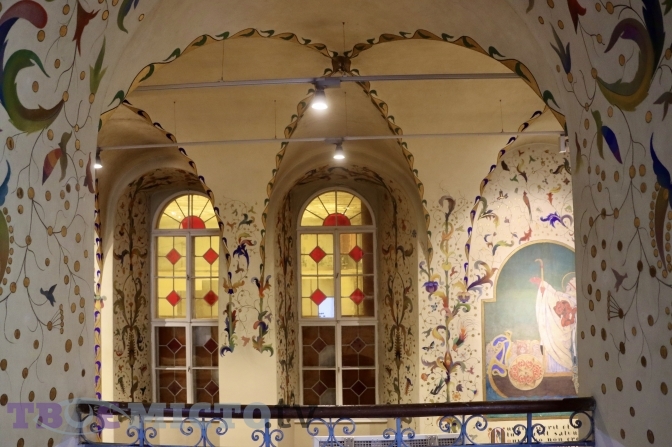 Fresco of the sacraments of Confession and Anointing

In the middle of the temple, Rosen illustrated the sacrament of Confession and the sacrament of Anointing. Saint Carl Baromey is depicted here. He served the sick during the epidemic in Milan and administered the sacraments to them. The saint is represented in the red cardinal’s robes opposite the dying person. It would be logical if the scene takes place in Milan, but Rosen portrayed it in Lviv. Researchers single out the specific Mother of God sculpture in the niche, inherent to the Lviv architecture, as well as the image of St. George on a tile or chimney background – the material that Lviv was famous for. 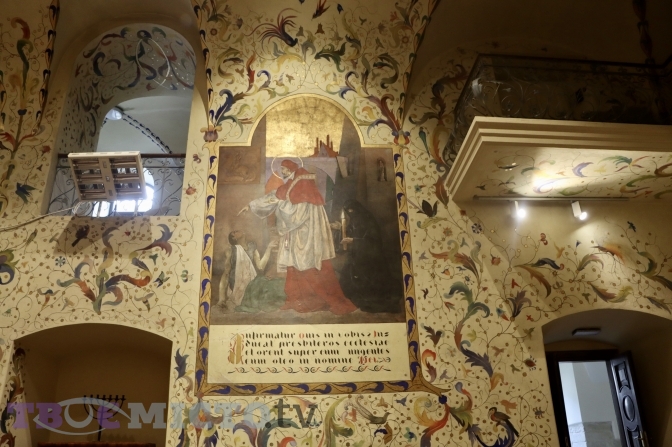 Opposite, there is the sacrament of Confession. The main figure here is St. John Maria Vianney. This is a French saint who became famous through confession. He was a very simple man and it’s believed that he didn’t pass the Latin exam. However, he was known as someone who could confess for hours. The second figure on the fresco in yellow is his patron saint, John the Baptist. He supports his hand because when the priest forgives sins and gives et ego te absolvo et Nomine Patris Et Filii Spirito Sancto (Latin – I forgive you your sins in the Name of the Father, and the Son and the Holy Spirit – ed.), he marks a person with the sign of the cross. It is true that the hand can get tired after performing it many times, which is why St. John the Baptist provides his support. Researchers say that the third figure in blue is a self-portrait of Henryk Rosen. 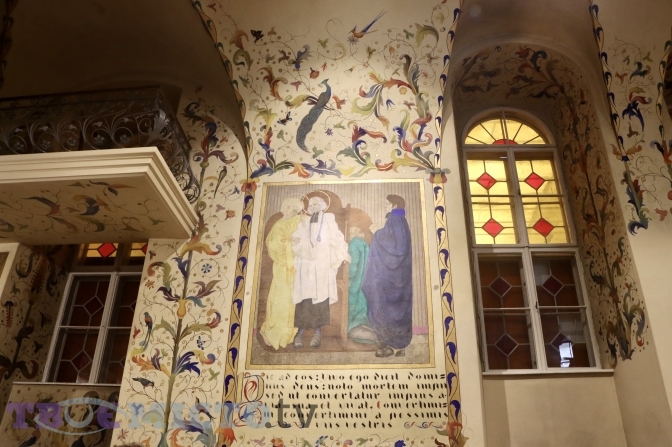 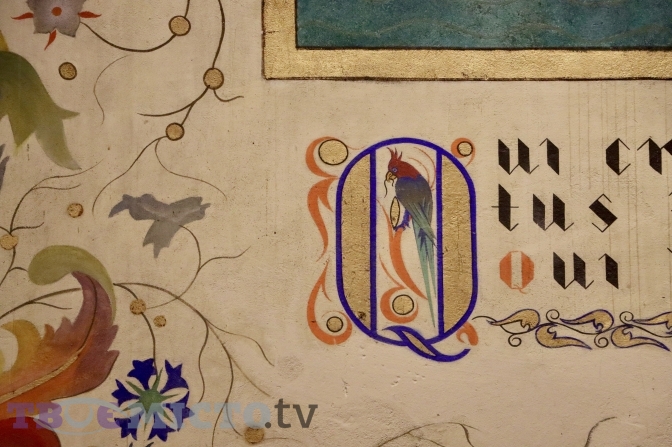 Fresco of the sacrament of the Eucharist

The artist depicted the last sacrament horizontally and this is an exception to other paintings. I suppose he was able to paint two images of the same shape and size as in all cases because Rosen was disturbed by the inner gallery. The artist proceeds from this situation by depicting St. Lucius in prison. The fact that he knew this story shows that he was a very knowledgeable man. 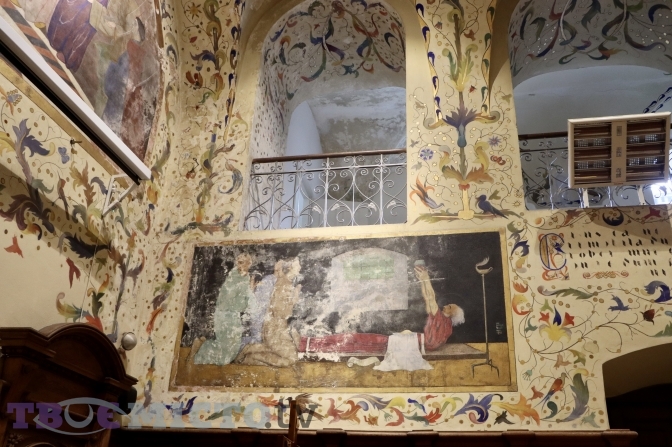 The artist depicts a saint at the end of the service, but this service takes place behind bars. St. Lucius is depicted tied to a bunk so that not a single drop or spear of the Holy Eucharist is defiled. During Rosen’s career, it was widely believed that the priest’s place of service was his body. In the first centuries, Christians were persecuted, there were no churches or altars, and priests performed the liturgy on their own bodies. Last century, this practice was restored during the Soviet occupation of Ukraine, when the Greek Catholic Church was banned.

Fresco of the sacrament of Baptism

The researchers’ thoughts are different about the person depicted in this fresco. Because of the Nordic boat and a shield, some scholars see here St. Boniface, who baptized the German and Danish peoples. Instead, Father Ihor is convinced that it was Saint Adalbert of Prague who baptized Polish tribes in the 10th century. In Lviv, the closeness of the Polish and Ukrainian peoples was specific. Poland was baptized in 966. Rus-Ukraine – in 988. You can look at the people who are baptized. They all have a Slavic appearance. 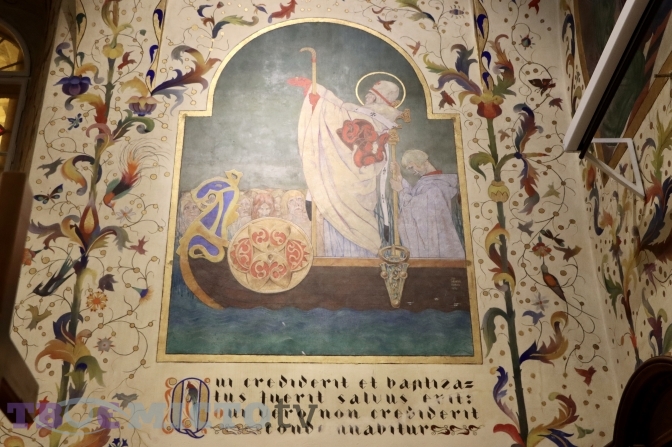 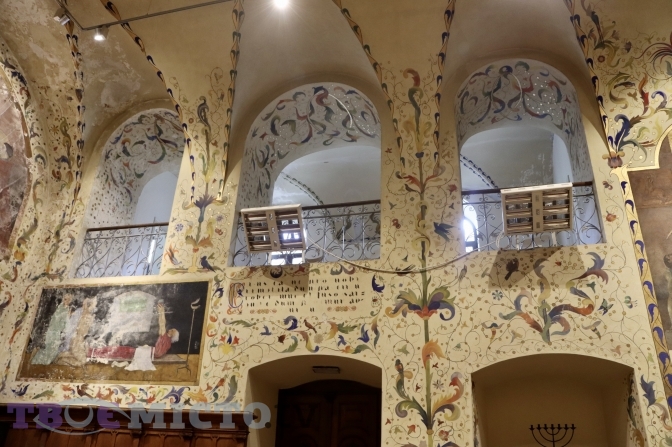 Fresco of the Descent of the Holy Spirit

It is the central image in the chapel. For the future priests who studied here in the seminary, it was a good reminder that they must build the Church through their own ministry, which is formed by the Descent of the Holy Spirit, the Third Person of God. 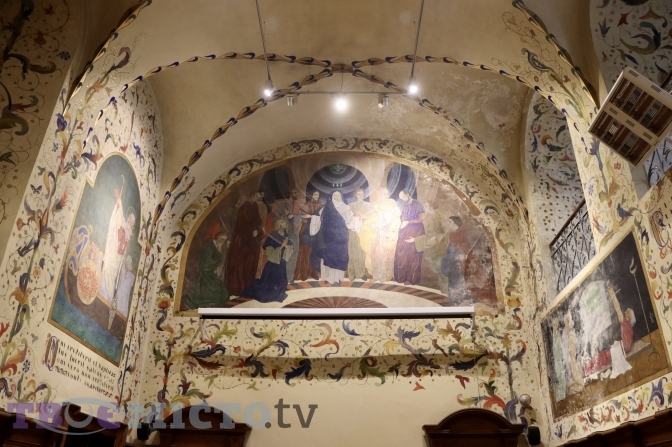 Rosen approaches the work quite innovatively because it depicts God’s grace in circles. To the left of the Virgin, Rosen depicted his colleague in the art workshop, who painted flowers and ornaments. It is noteworthy because the perspective in the image in this scene has a kind of circle that seems a continuation of the chapel. The artist wanted the seminarians to feel that during their prayer, they are direct participants in this Descent. 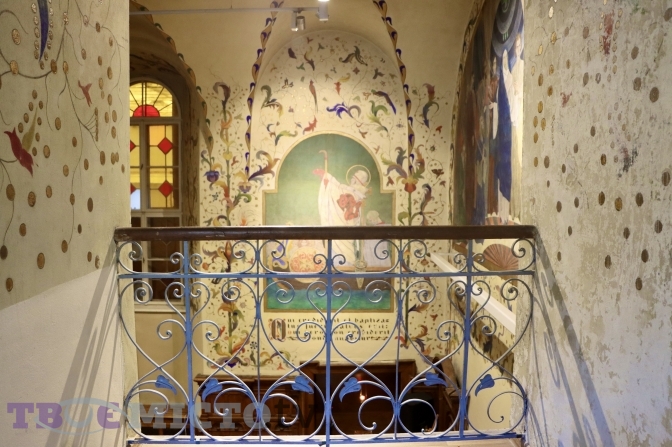 Why you should visit Rosen’s Chapel?

You need to pay attention to floral ornaments in the frescoes. This is a direct link to medieval books. The chapel was conceived by Rosen as an open gospel. You should also look precisely at the birds. There are exactly 73 of them – this is the number of books of the New and Old Testaments. Sometimes they are not visible and they are hidden even in letters. In general, the vegetation here resembles a paradise that human has lost, but through the sacraments and the Scriptures, he can find it again. 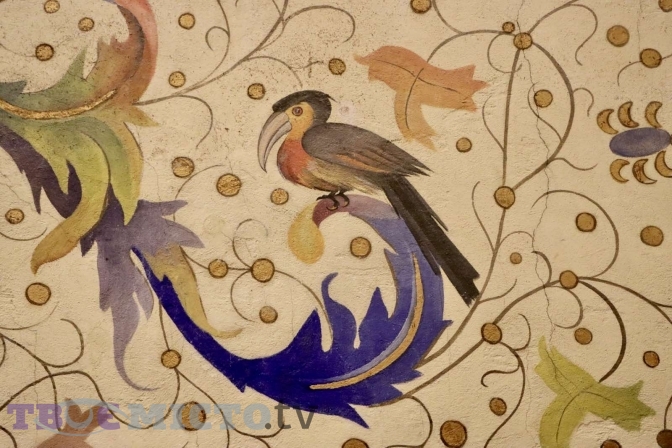 The chapel serves to meet God, to pray, find inner peace, silence. Especially when the paintings and the design of the chapel help with it. Analyzing these frescoes, we can touch on the history of our city and the Catholic civilization. 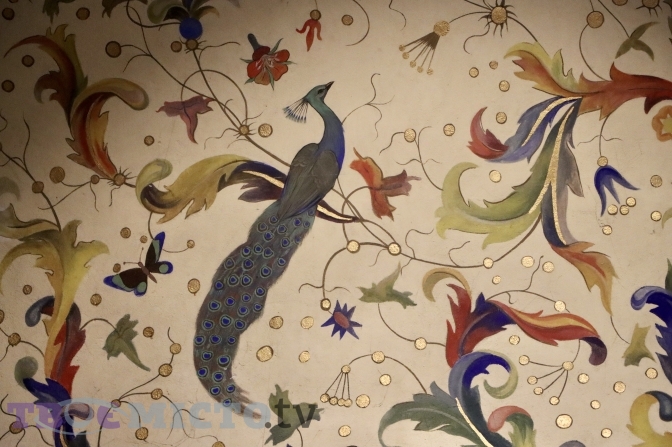 There’s an option to choose some pastoral group. These groups are organized by priests of the Dominican Order. In Lviv, they are not engaged in scientific activities, but are famous for science and teach in particular at Oxford and the Sorbonne. There is a screen and a projector on which movies are shown here from time to time. You can also just meet interesting people or learn something new – or just drink tea. 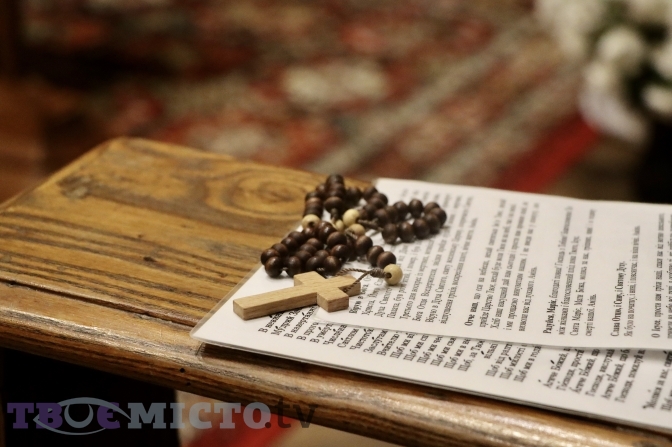