In Uzhhorod, «Coffee is a Power That Hold Us»

16:48 12 August 2021
Tweet
1000 0
Uzhhorod, six hours by train from Lviv, on the Slovakia border, is an ancient city of open-air cafés, warm river breezes, and linden-lined pathways. There you can eat hearty stews and pizza, enjoy deep Transcarpathian wine, and most especially drink coffee. 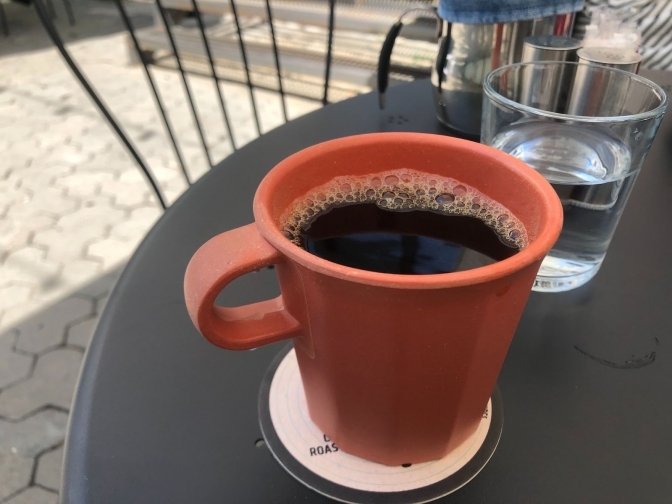 UZHHOROD – «Why do we stay in Uzhhorod? Ah, because we like to stay and drink coffee. Coffee is a power that holds us,» said Natalia, as she made me a V60 pour-over with beans from Rwanda. A Lviv native, she’s a barista at Duffort, a half-indoor, half-outdoor coffeeshop with lots of plants, down an alleyway in one of the city’s many pedestrian areas. «Maybe you will stay too.»

Some music friends from Lviv had invited me to join them in this city on the Slovakian border, a six hour train ride away, for a two-day trip. One week later, after my friends had returned to Lviv, I was still in Uzhhorod. Was it because of the coffee?

«The typical Varoshskiy drinks 4-5 cups a day,» a new friend told me. «We drink coffee and we talk. We go to church and we drink coffee.»

Varoshskiy is what people here call themselves; it means someone «from the city,» as though it is the only city, just like Istanbul comes from the Greek for «toward the city.»

«You don’t need to text your friends to meet then,» said another friend. «You just take a walk and you will find them.» 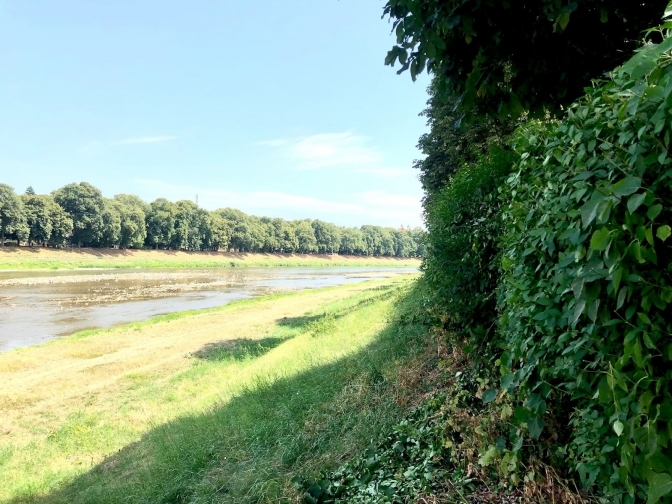 From the river, you can hardly see the city behind the boulevard of linden trees.

Whenever I left my hotel, I always saw someone I knew sitting outside of a coffeeshop or along the linden-tree lined embankment of the Uzh, a low and wide meandering river whose name means «snake.»

Much of the center is pedestrian only, amid a mix of tired Soviet buildings and more august Austro-Hungarian neoclassical or Art Deco Czech architecture. With many cafés that are partially or completely outdoors, where people chatt while radio music plays, I felt like I was in Tel Aviv or Jerusalem. On the other side of the Carpathians from Lviv, Uzhhorod has a drier, sunnier climate. 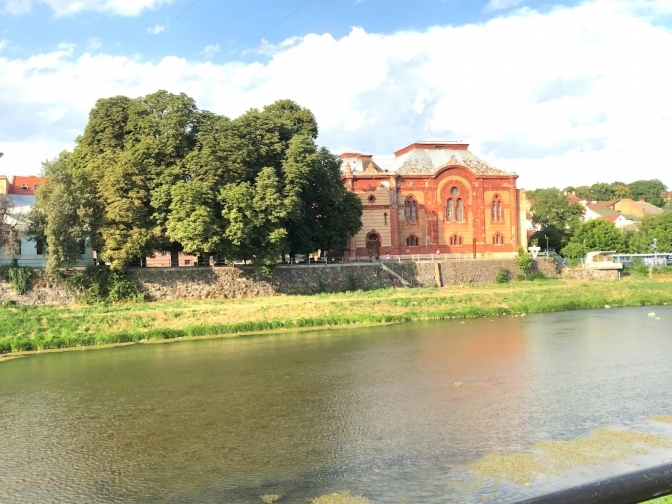 The old synagogue on the river Uzh

Incidentally, before the Holocaust, the city has nearly 10,000 Jews. Their synagogue – one of the city’s masterpieces, on the river – still stands, now as a concert hall. As refined and calm as the city is today, its history has been of course turbulent: founded in the 9th century by Magyars (Hungarians), it has been burnt by the Mongols and moved back and forth between empires and nations, including Czechoslovakia and Austro-Hungary. 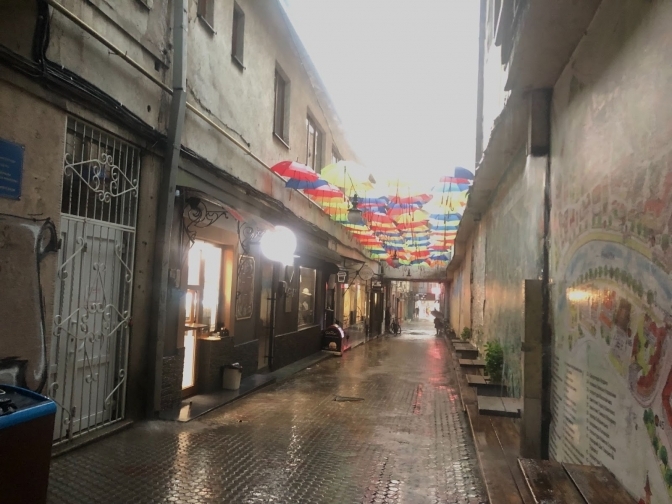 A Soviet-era alley way, brightened with new touches, during a brief rainstorm

The city is not just about coffee. One mitigates the caffeine intake with plenty of locally-brewed beer, often in a Czech style, and locally-made Transcarpathian wine, either homemade from friends or bottled, such as the rosé from Muska, which I discovered at the friendly Syro Vyna (Сиро Вина), a modern and cozy wine room.

And then there’s the food: Based on recommendations, I embarked on a quest to find the best of these three: pizza, bograch, and «segedinsky goulash.» 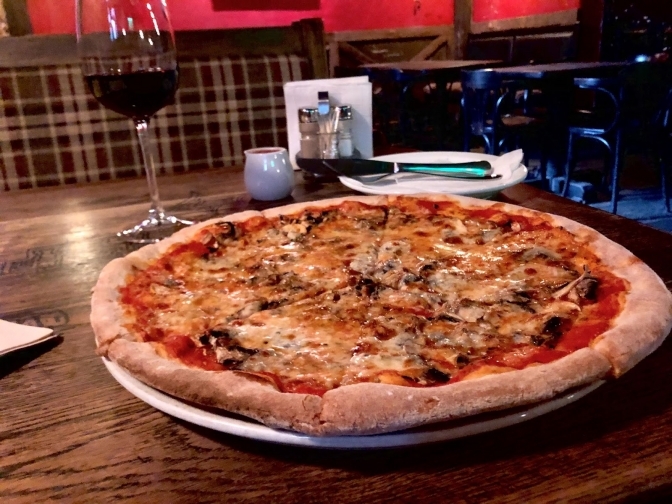 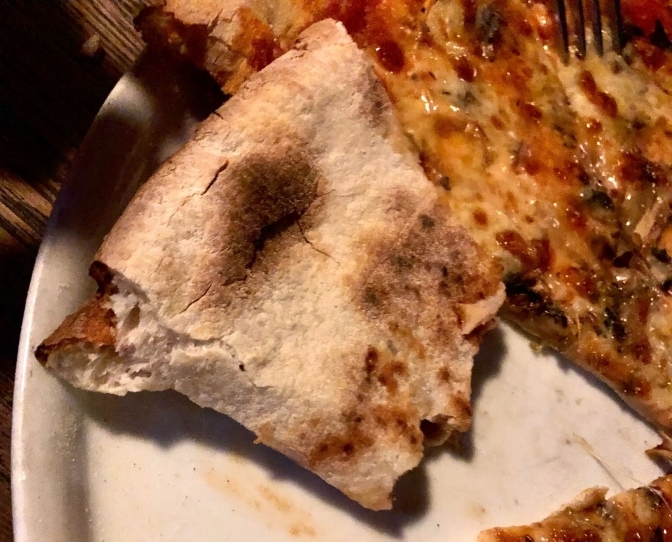 The pizza at Egan

My Lviv friends insisted we start by eating pizza at Egan Irish Pub. Nothing about that sounded right, but I’m glad I listened. The pizza is as good as the best I’ve had in Philly and Detroit, at least.

It’s a real Irish pub, in that it has no Lepreсhauns statues or Irish music piped in. It is simply big oak tables, a wood floor, gracious service, hearty food, with classic American rock: pizza, salads, bograch, local beer, local mineral water, and Carpathian wine. The pizza achieves the magic of thin crust just crispy enough to hold the cheese and thoughtful toppings.

«Some Italians visited and said Uzhhorod pizza is just as good as Italy,» said Victoria, the clerk at a shop where I would buy the delicious local mineral water, Luzhanska. 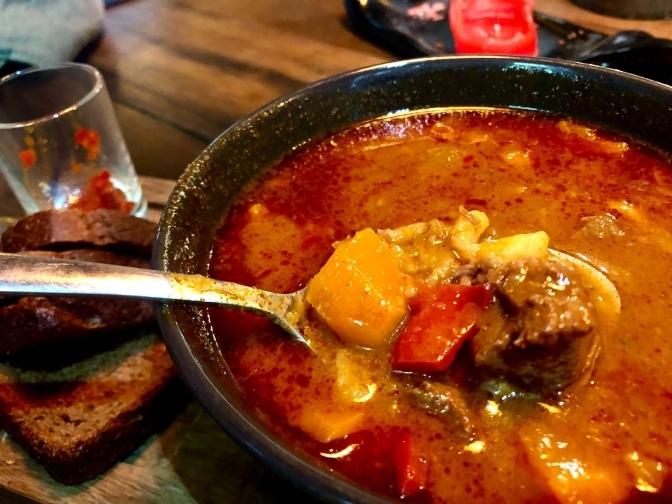 Bograch: I can’t call it just a soup because like Louisiana gumbo it is something deeper and more mysterious and nourishing. One evening I walked past a little place with no sign but with a few people eating on a brick alley terrace behind an ajar gate. Maybe it was someone’s house, but I entered. Right decision.

Villa Alferd is indeed a restaurant--with the best bograch I had, made with venison, large carrots and peppers, and served with a jar of Hungarian spices so you can add to taste, until you sweat. Just make sure you ask nicely that they put some meat in it. 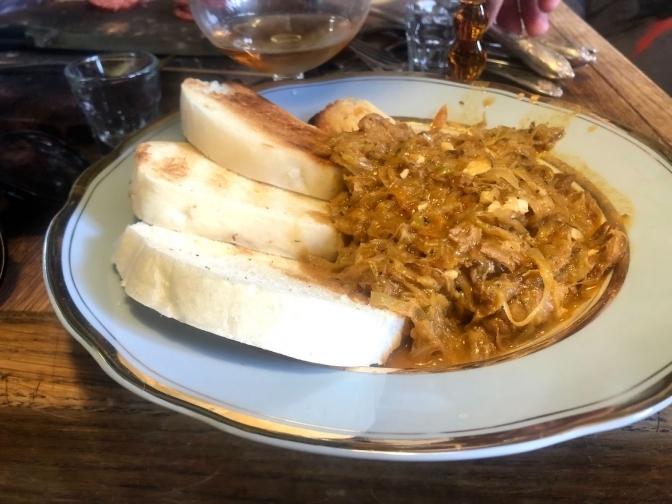 Segedinsky goulash: A professor of medieval warfare invited my Lviv friends and I to lunch at his family apartment to try this supreme local delicacy. While one of our friends chopped salami and fresh giant local orange, red, and yellow tomatoes, a pot of the venison goulash with French-bread dumplings increasingly wrapped us in its strengthening aroma. When we ate, I felt as though I was in a Michelin-rated trattoria near Bologna.

Returning to my hotel, with a mug from Duffort in hand, I asked for my key and the clerk said, «Ah, more coffee. Yes, everyone here drinks lots of coffee. You see people sitting on the benches or walking all day taking a coffee or a beer.»

«I always wonder if anyone works,» she said, laughing. «I don’t know! I wonder!»

«Lviv is sweet, this city is spicy,» said a friend who has lived all over the country. «The pace of this city, it’s the best in Ukraine. There are enough things to do but also it is calm.»

The slow pace is especially evident along the lovely linden promenade, where every day seems like a Sunday afternoon. But the slow-dream is broken a little on the non-pedestrian streets. The drivers seemed to me more aggressive than in Lviv.

«Yes,» said Volodia, a friend of my Lviv friends. «I think they want to show off that they have a car, even if it is a bad car and so they drive fast and honk their horn.»

Danylo, walking alongside: «But it is better than Kyiv. Where they might kill you.»

«And here they are not driving to work or to some important meeting,» Volodia said. «Maybe they are going to buy a plant, but it’s an important plant for a good friend: The main activity of the day. And so get out of the way.»

Just before my train, when I at last left ten days later, two new friends invited me to lunch at Panorama, atop the tallest building in town, 8th floor or so, with a covered outdoor patio. The food was fresh and healthy and the view of the houses and castles nestled in the Uzhhorod hills, seen from a trendy cool spot, reminded me of California.

As I took off running for my train, my friends on the rooftop could watch my course below. I knew I had to run, lest I saw others, stopped for more coffees, and never made it out of town–which would not have been so bad. 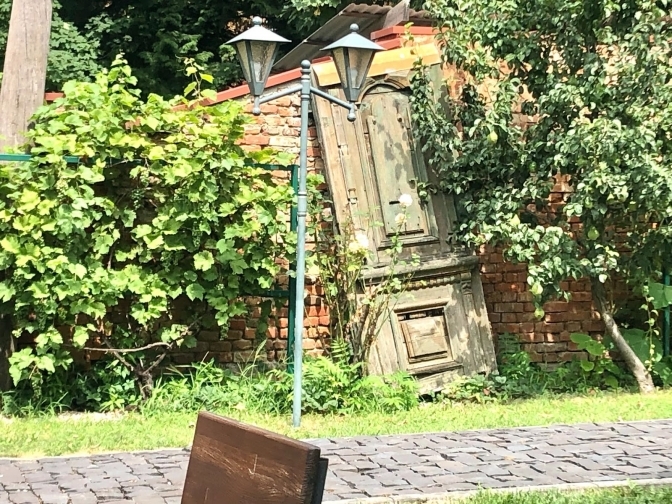 The whimsical garden at Villa P

Villa P: a 17th century small palacio next to the Uzhhorod castle and the tasty, classy half-alfresco Hungarian Courtyard restaurant, this place has eight guest rooms and serves a hearty breakfast of four options in the walled and gated garden or in the wine cellar. The latter also functions as a secret high-end wine club for guests only. At night, guests gathered at the tables in the garden, drinking wine or tea and talking quietly. A kid lay in a sleeping bag on the lawn while the parents chatted. 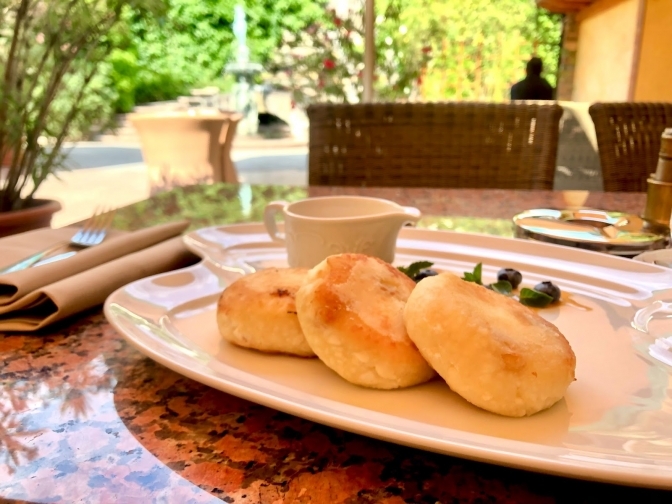 Cottage cheese pancakes: breakfast in the private courtyard of the Old Continent

Old Continent: This is a grand dame hotel, unexpectedly between two less attractive buildings, with exquisite kindness and service from the front desk staff. Classy and large rooms. A courtyard in the back with a statue-fountain and a wall-fountain is a pleasant retreat for breakfast or for aperitifs. At breakfast you can order at will from the kitchen, included. For 2,000 uah more, you and probably a half dozen or so others can rent the private spa, which includes hot and cold pools and multiple types of sauna.

Ungweiser: Above a quite cool, sprawling, energetic, half-indoor, half-outdoor beer hall, where they make their own, you can stay for 500 uah a night or so in a small, en suite, clean, air-conditioned room. No luxuries and no opening windows–only skylights–but if most of your time is spent strolling the town, this is a most excellent deal. The same people own this and the aforementioned Hungarian Courtyard restaurant. [The city’s Hungarian name is Ungvar.]

It’s quite easy to take a train from Lviv. For privacy, first-class on the overnight train from Kyiv or Odesa gives you a compartment and coffee and tea to enjoy as you roll through the Carpathians. You can make reservations here.

The Lviv-based cycling club Epiq often offers excursions to Uzhhorod. You can read more about them here: A Club of Cyclists, Exploring Galician Roads and Carpathian Trails.