«It was the worst during the Russian rule,» – memories of celebrating Easter in Ukraine during wars

21:32 25 April 2022
Tweet
231 0
The Feast of the Resurrection of Christ during the war acquires a special symbolism. And this year, it will probably give Ukrainians even more faith in victory. Lviv Now learned how Easter was celebrated in Ukraine during the First and Second World Wars, in the interwar period and under Soviet rule. 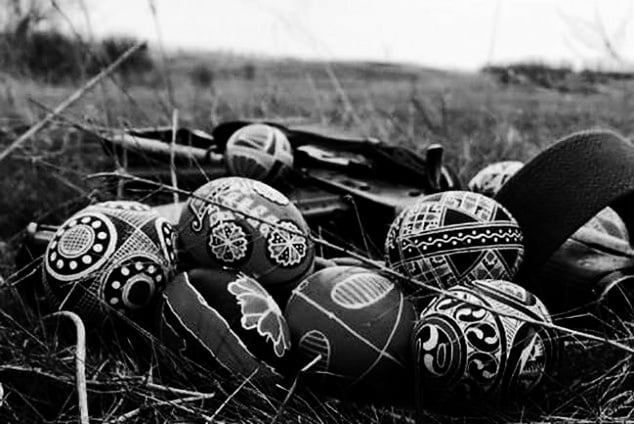 The Germans were loyal to religion

«I remember the Easter holidays in the underground very well. Now, we prepare many different dishes, and at that time, my mother went to the Divine Liturgy, took one egg, which she then shared among everyone at home, and a tiny bun instead of Easter cake, bought for five coins. That was enough, and there was nothing more,» – recalls Mrs. Marta Kohut from Lviv. The woman is 81 years old, and although she complains about her memory, she remembers how her father, the priest Stepan Kolomiets, served secretly in the church of the village of Nadiiv in the Ivano-Frankivsk region, where their family lived at the time. Every Sunday, every holiday they went to the liturgy, sometimes covering kilometres to neighbouring villages or towns. 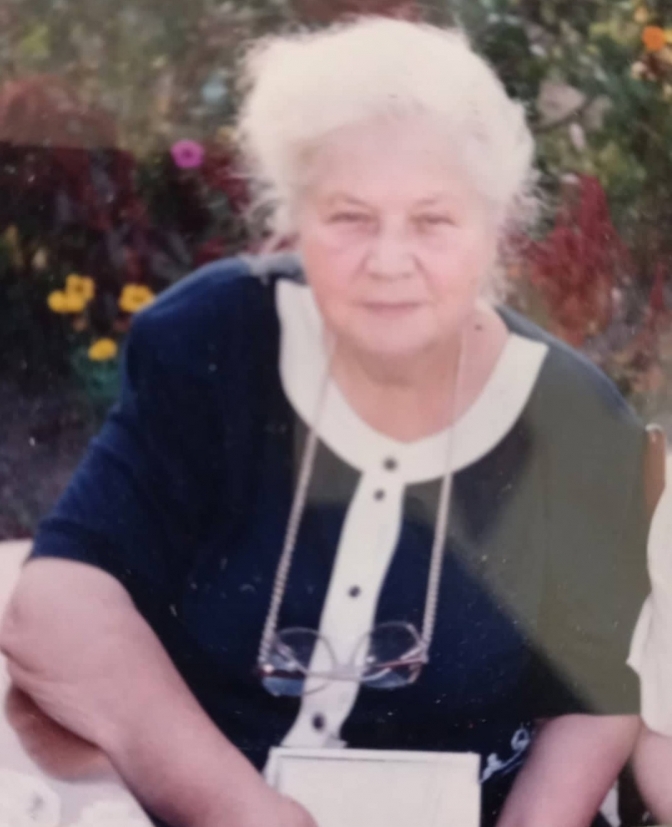 When Mrs. Martha’s father was arrested in 1949 for refusing to convert from Greek Catholicism to Orthodoxy, their mother and five children were left alone. Then, she says, it became even harder.

«Our dad was taken away when I was in first grade. Just imagine what a celebration of Easter it was. Hungry, cold and barefoot. The younger brother ran to the other end of the village because people there killed a pig and said that they would make blood sausage. And then, he came in so disappointed and said, «Mom, I ran back and forth so much, and they said the blood sausage hadn’t boiled yet.» This is how we celebrated the Easter holidays with nothing for all the years when dad was gone,» – says Ms. Marta.

The woman was born at the beginning of World War II. She does not remember the events of the war but recounts many memories of her family. She says that Easter was celebrated differently in different years. What was before the 1940s changed during the war. And it was even different when the Soviet government came. According to Mrs. Marta, it was a terrible, perhaps the worst time.

«Before the war, there was one thing, with the Germans – the second, with the first and second Soviets – the third... It was best with the Germans, they were loyal to religion, allowed to go to church, my father could hold services, and that was life. Although I don’t remember what it was like for the Germans because I was small. And with the Muscovites it was terrible, they beat us and forbade everything. As soon as they came, they immediately started confiscating everything, taking people to collective farms, sending children to become pioneers,» – the woman recalls.

After their father came back home from prison, they were deported from Western Ukraine to Zaporizhzhia for 10 years. Mrs. Marta herself did not live there for a long time, she returned to Lviv to study at a medical school, and once she was there for the Easter holidays. He says that in the Zaporizhzhia region, they were celebrated in a different way, much more widely. The local Orthodox priest had «respect» for the authorities, and many medals «for the protection of the family», so he was allowed to serve. People came to him 300-600 kilometres to dedicate Easter.

In Galicia, on the other hand, under Soviet rule, no one dared to admit to going to church, otherwise they would have been in prison.

With shooting gangs and the Soviet commune

Historian Mariana Baidak, who studied the period of the First World War, in particular the daily life of women and children, says that in the first two years Ukrainians were apathetic to any holiday, perceiving it as something that is out of date. No one could rest easy, because every family lacked someone, so there was no sense of celebration. Eventually, people adapted, realized that there was no other way out, and the holidays were transformed into a kind of vent, became the hope that everything will be fine, that in this way, people are distracted.

«Obviously, Galicia followed the traditions that still exist in our country. Women with children, if possible, attended church, were at the Divine Liturgy. If the church in the village was destroyed or there were villages where this did not happen, they merely gathered in someone’s house. If there was a priest in the village, people would stand around his house to dedicate Easter cakes to them,» – says the historian. 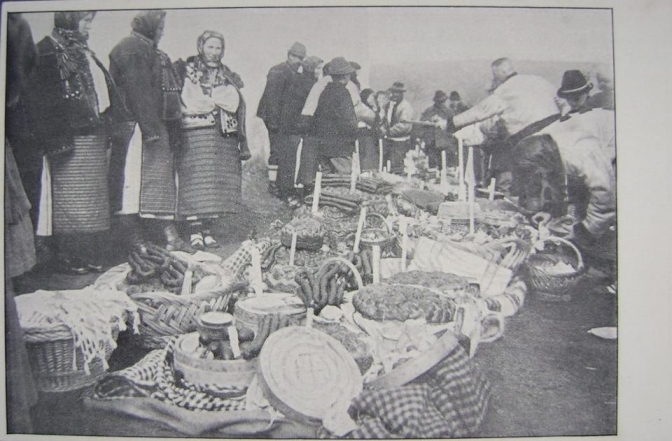 During the war, it was difficult to assemble an Easter basket due to food shortages. People in the villages grew what they could. And in the cities, it was harder to buy meat or flour for the Easter cake. Mariana Baidak says that in letters to men at the front, women often wrote what they managed to get and what they did not. There were even letters in which women gave censuses of Easter cakes.

Mothers tried to pass on folk traditions to their children, taught them poems and songs, and on holidays such as Easter, organized small home concerts to comfort themselves, to forget for a while about the war and what was going on around them.

Folklore researcher Oksana Kuzmenko notes that the celebration of Easter during the First and Second World Wars differed significantly. In the war of 1914-1918, Ukrainians were in two armies – the Austro-Hungarian Empire and Tsarist Russia. According to many historians, the so-called fraternization between the Ukrainians of Galicia and Greater Ukraine took place on Easter. Especially in 1916, when there were long breaks in active hostilities. On this day, the soldiers even went to each other, because the war was positional, on the battlefield, and opponents talked and realized that they were children of the same nation.

«When the Easter holidays came in the territories of the legion of Ukrainian Sich Riflemen – the Ukrainian army in the Austro-Hungarian army, they were most involved in the ritual, because they were on their land and understood very well who they were dealing with. I am talking about when they were still in the current Lviv region, Ternopil region, i.e. in the Western Podillya to Zbruch. When Easter came, they went to the village or stood in the village, went to the church, took part in the Divine Liturgy, and after the liturgy in the traditional Galician village, the girls led the haivky walk-arounds near the church,» – says the researcher. 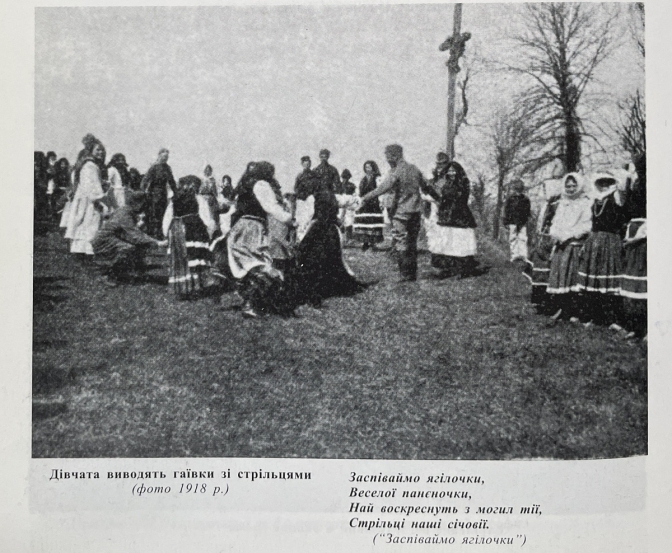 According to her, going beyond Zbruch, soldiers of Ukrainian Sich Rfflement carried with them a traditional culture, which was banned by the tsarist government. This is how the natural, soft Ukrainization and conversion to Ukrainian culture took place. And Easter was one of the greatest holidays when it was possible to show unity.

Oksana Kuzmenko calls the peculiarity of the First World War that the soldiers of the tsar’s army also took part in worship services. It is known from legends that the so-called «first Muscovites» were very devout, adhered to formal religiosity – went to church, baptized, celebrated Easter, partook of communion, took Easter cakes, Easter eggs. At that time, the fire stopped and everyone celebrated together. Then there were shooting parties, which became a unique phenomenon in the calendar-ritual songs. They had the image of a warrior-defender. This idea of ​​the resurrection of Ukrainian statehood has become a leading issue.

«During the First World War, the fighting stopped on Easter, because there were people on both sides, one way or another connected with the church. But the Second World War was cruel, cruel because two worlds collided in it. The situation we see today was very similar. There is a world of spiritually religious people, and there is a world of godless, because we cannot even call them atheists. Because an atheist admits that there is no God, but respects the culture of others. This manifested itself during the entire guerrilla war, which lasted not four years, but decades – from the mid-1940s to the early 1960s. This is where we can talk about completely different traditions, « – the researcher continues. 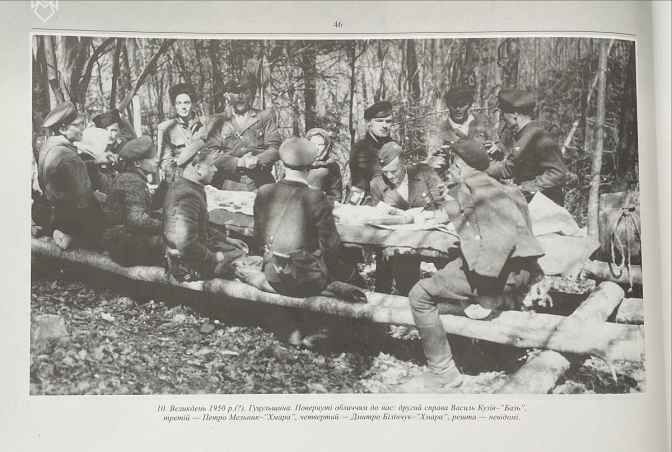 Surviving photographs of the time show how the insurgents celebrated Easter in 1950 – in the woods in the Hutsul area in the Carpathians. The symbolic table was covered with pine needles or a small piece of cloth and laid out the provisions that the peasants gave them. Then everything was delivered secretly, in baskets. If possible, the rebels went to church for the liturgy or priests came to them and took communion. 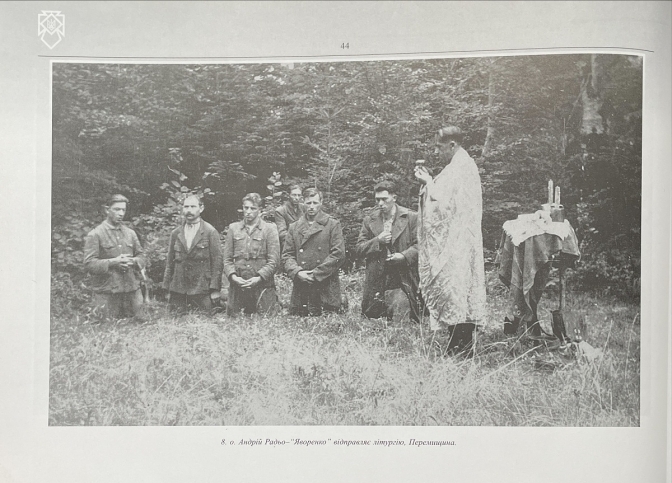 Oksana Kuzmenko says that at that time, the Ukrainian Insurgent Army didn’t even recruit soldiers on Easter, leaving the boys to celebrate with their families, and they came the next day. Ukrainian soldiers also honoured their deceased relatives and, if possible, ordered a service for their repose. And if the father-in-law was a traitor, a whistleblower, obeyed the Moscow church and refused to pray, the insurgents liquidated such a minister.

On Easter, the workers of NKVD often made arrests and raids to kill as many insurgents as possible. The researcher recounts their memories of how they learned in prisons that Easter had come, because they had lost their medicine from night interrogations for days and hours.

Here is how the girls from the Lontsky prison in Lviv remember these events:

«And on Easter, we hear «Christ is Risen, girls!» And we ran, where the water flows, to that pipe. But not from a pipe, then from a hole through the toilet. Here the priest alone called us «Christ is Risen», we answered, and then all started weeping. Girls, listen, I will lead the Divine Liturgy. Then, the guards were so good, a couple of nice ones. One’s surname was Zhydkur, and another one was called Kryshtalnochysty (Crystal Clear). «Girls, don’t let us down.» When a boss appeared, they immediately knocked lightly on the window, and we finished. This is how the priest conducted the Divine Service, and this is how we listened to the whole Divine Service. Then, as he preached, he said: «This Service of God can be more valuable than that which is conducted in the church» (memoirs recorded by folklorist Yevhen Lynio (1960-2021). 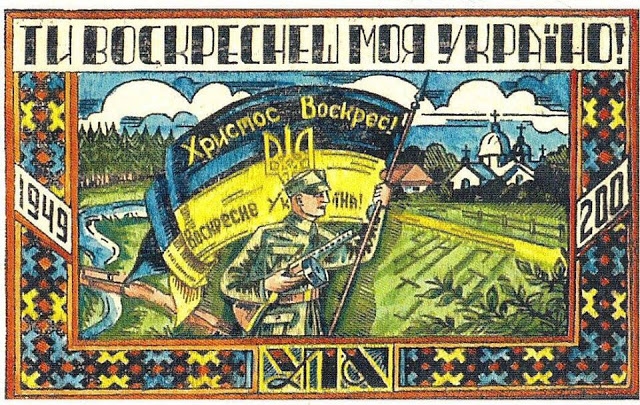 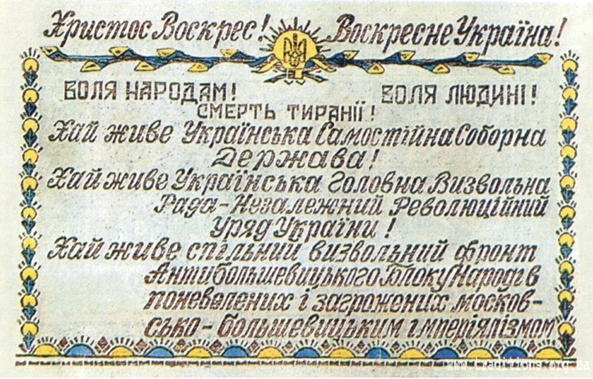 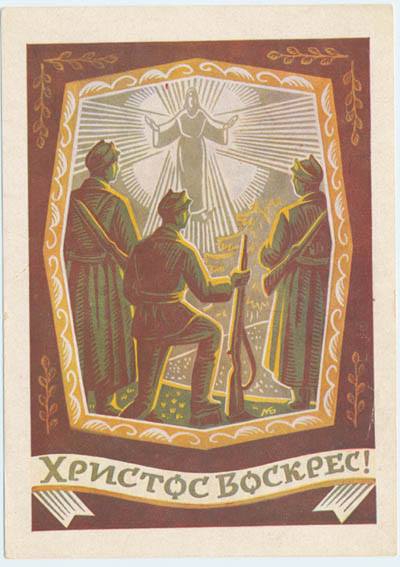 The researcher admits that she has never read anything more valuable. He says these verses testify to how people sought God’s blessing even in such circumstances.

Another evidence of the celebration of Easter was that the rebels placed birch crosses on the graves of their brothers. And on Easter and Green week, crosses always had to have a trident made of wire with yellow and blue ties.

In the Soviet period, of course, there was no talk of celebration. Not all temples were serving then. Only in the 1990s did most churches open. Then, the Easter traditions, honouring the memory of relatives, literally exploded. And today, we have these traditions due to the fact that all this time, despite the wars, bans, people in any way celebrated religious holidays.

Photo from the collection «Army of the Immortals. Insurgent photos «, sites ck.ridna.ua, baitsar.blogspot.com and inlviv.ua