12:20 12 January 2022
Tweet
215 0
1972. A handful of Ukrainian intellectuals walk with a nativity scene. They do not yet know that in three days almost all of them will be imprisoned and sent to camps… 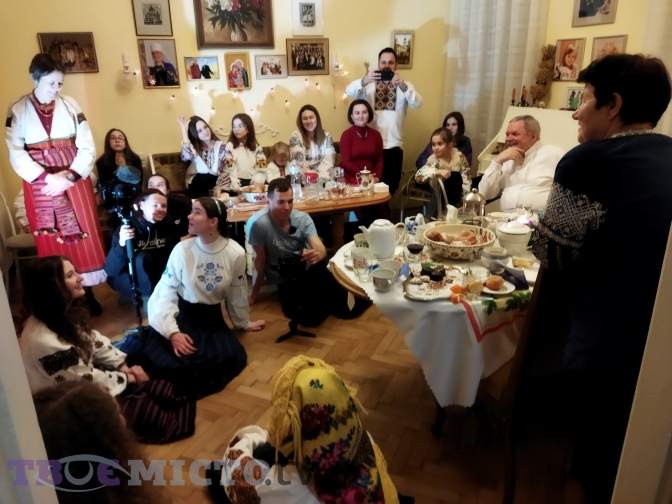 In 2022, the tradition of dissident carols continues in Lviv. The oldest Sokyryn nativity scene of the 18th century from the Ukrainian Catholic University school theatre «On Simon’s Pillars» travels to the homes of former dissidents, along with a troupe of performers. Lviv Now with the theatre actors go to Myroslav Marynovych, one of the leaders of Ukrainian dissidents and a friend of dissident poet Vasyl Stus, who died in a Russian labor camp, Perm-36. 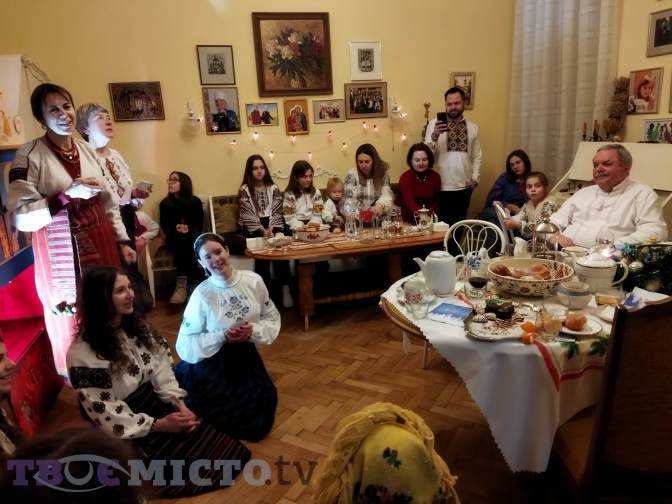 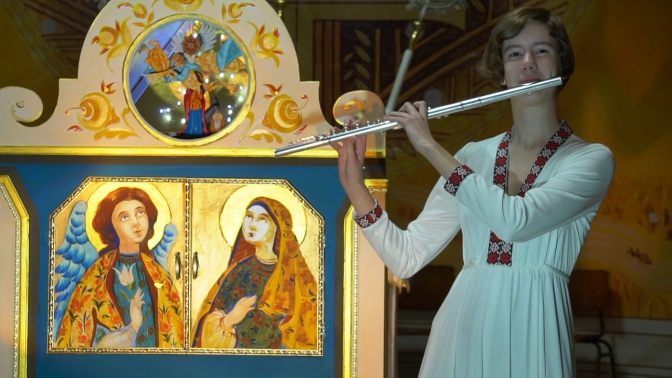 In a spacious apartment in an Austrian house near Kyivska Street, 20 minutes to Lviv’s city centre: On the walls, there are family photos, a portrait of Bishop Borys Gudziak, who is the president of Lviv’s Ukrainian Catholic University, a painting depicting white and pink peonies. Along the walls, there are bookshelves lined up to the ceiling with books.

The large family of Myroslav Marynovych, a well-known Ukrainian dissident, human rights activist and vice-rector of the Ukrainian Catholic University, sits on sofas and armchairs arranged in a semicircle. There is a shopka [installation of nativity scene] in the centre of the room, and actors of the UCU school theatre «On Simon’s Pillars», directed by Yevhen Khudzyk, show vertep – a traditional Christmas spectacle. Later, the owners admit that they had many carolers and nativity scenes that came to their house, but they have not seen anything similar to this one.

This year’s Nativity Scene is dedicated to the 50th anniversary of the arrests of Ukrainian intellectuals, including Vasyl Stus, who, along with leading Ukrainian cultural figures, organized the Nativity Scene in 1972, after which most of its members were detained by the KGB.

«This idea was born when we were preparing for the anniversary of Stus’s [demonstration] and turned to the date of his first arrest – January 12, 1972. Then, we realized that exactly 50 years have passed since then. This was one of the main waves of arrests of Ukrainian intellectuals – the so-called Operation «Bloc».

So now we want to carry out Operation «Unblocking» – to remember those events, those people, to invite them, to thank them for the courage and sacrifice they brought. It is important to remember that their protest was due to the glorification of Christ,» – says Yevhen Khudzyk.

In 1972, Soviet authorities persecuted religion and any its manifestations. A dissident poet Ihor Kalynets, who was also an initiator of the nativity scene, kept the raised funds in his house until he distributed them between the families of the carolers, who later, 12 January, were arrested for «producing, distribution, storage of defamatory literature, participation in nativity scenes, hostility to the Soviet socialist system.» All this money was soon absorbed by the legal procedures. 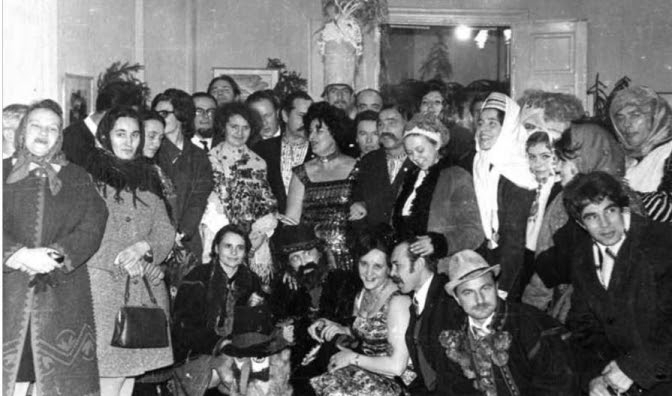 «There have been many searches and arrests. Not so much money was raised, but they all went to lawyers,» – the poet narrated earlier.

What is the Sokyryn Nativity Scene

Participants of the UCU school theater «On Simon’s Pillars» are reviving the Sokyryn Nativity Scene. Artist Bohdan Polishchuk made a shopka for them, and now the director and actors carry it from house to house to share the good news. 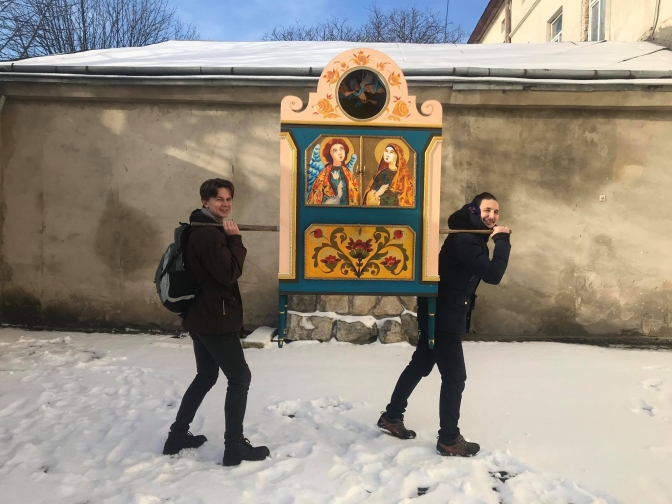 The Vertep–the gathering of people to perform the nativity sequence and sing songs–visited Myroslav Marynovych, but its participants plan to visit many more homes: dissident poet Ihor Kalynets, family of human rights activist of Soviet time Mykhailo Horyn, first rector of UCU Father Mykhailo Dymyd, musician Taras Chubay, teacher Pavlo Hobzey, and plan to perform at the Andrei Sheptytskyi National Museum in Lviv, named after the Greek Catholic archbishop who stood up to the Soviets and the Nazis. 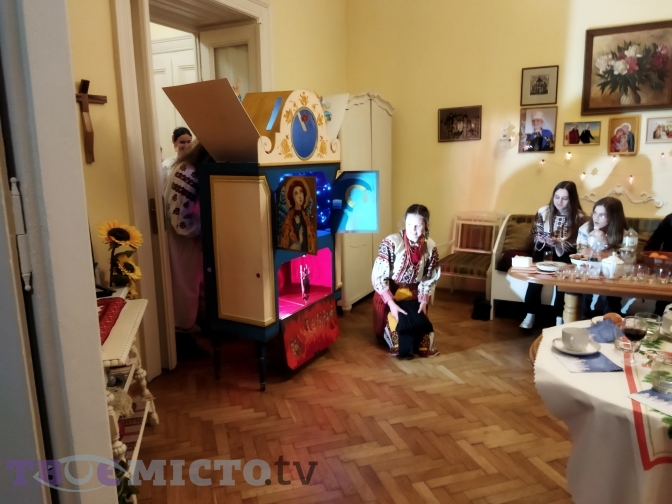 In general, a shopka is a wooden hut. It has three levels, three dimensions – heaven, earth, and hell. The doors leading to the respective spaces are then opened, then closed according to the action. All this time, the actors stand behind the hut and move figurines-dolls with the help of long skewers: angels, shepherdesses, devils, three kings, Joseph and the Virgin Mary, Herod, baby Jesus. 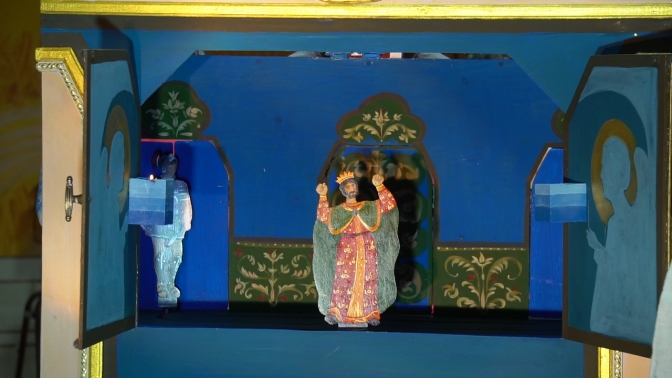 The director of the theatre «On Simon’s Pillars» Yevhen Khudzyk says that they show the Sokyryn Nativity Scene, which is the oldest in Ukraine. According to him, the tradition of nativity scenes dates back to the XII century. The nativity scene was founded by St. Francis of Assisi.

«The whole puppet theatre is based on a nativity scene, so it is important to revive this ancient tradition,» – Yevhen Khudzyk says. 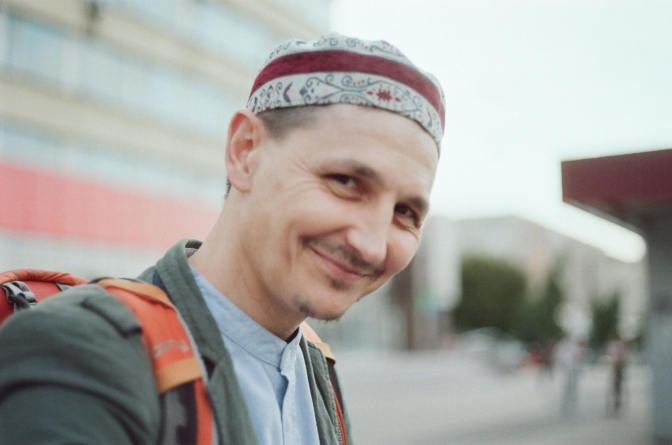 Several Ukrainian cultural figures began to revive the nativity scene at once. «We worked on this nativity scene last year. At the same time, [musicians] Skrypka, Chubai, and Kompanichenko began to create it in Kyiv. Bohdan Polishchuk, who made our shopka, is now also making the Sokyryn Nativity Scene. This is a tradition that has exploded now,» – the director continues. 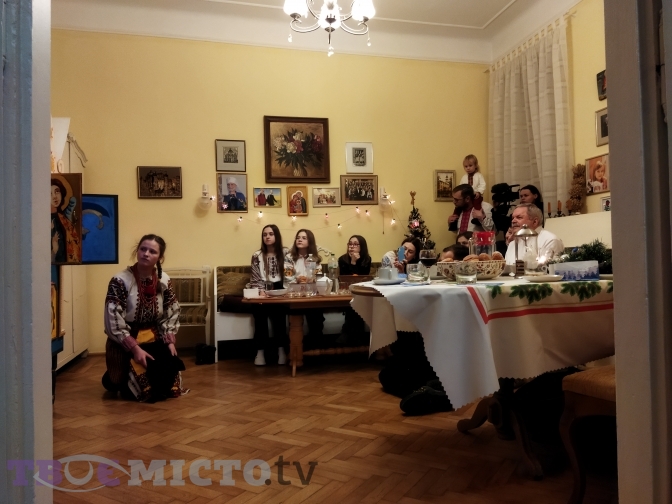 What the nativity scene wants to convey

The director intends to gather at the nativity scene all those who revived Ukrainian culture, nurtured the national idea and identity, and thank them.

«We want to thank this nativity scene for the longevity of this tradition by defending it at the cost of their own lives. That is why it is important for us that this evening of remembrance be dedicated first of all to the birth of God, in order to gather around the mangers of those people who carried the good news during the revival of Ukraine in the 1980s and 1990s. We invite the Lion Society and the Meta Theater to it, because it is a whole wave of tradition that has been passed down through the generations. I really want this Christmas spirit to be felt, the spirit of gratitude to those people who defended the truth, and Christ, and their Ukrainianness, national identity,» – Yevhen Khudzyk says. 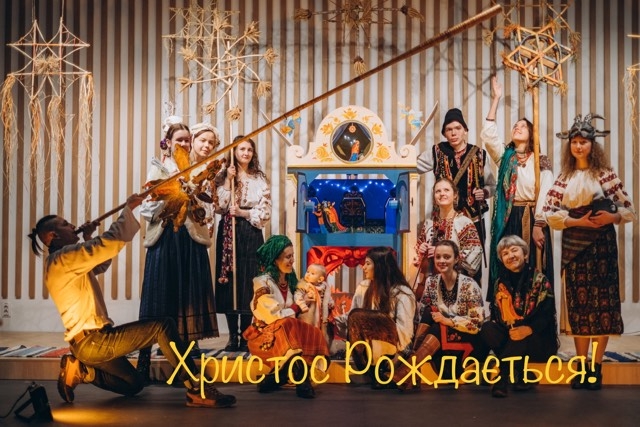 «We know that in 1972 the nativity scene raised funds to help arrested dissidents and political prisoners. And we want to revive this tradition, so we are raising funds for those who are now political prisoners and in Russian prisons. In particular, for the residents of Crimea and Vladyslav Yesypenko – correspondent of the project «Crimea. Realities» from Radio Free Europe,» – the director emphasizes. 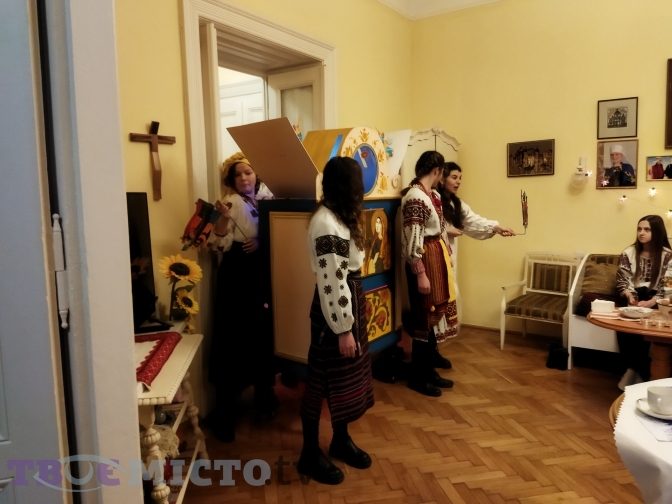 Pass on the mystery of Christmas

The concept of a three-tiered shopka is not new. Yevhen Khudzyk has implemented it before. He visited many European cities with the nativity scene and the troupe of the Kurbas Theater.

«According to this concept, we made a nativity scene where people played dolls. Then, there was also a three-tiered shopka with angels, shepherdesses and a devil. One of the actors is now a priest in the Diocese of Paris, the other – the mayor of Yavoriv [town in the Lviv region]. We also set up a nativity scene in the Les Kurbas Theater. We wanted to go with it to Jerusalem, but the crisis began, and we only reached Rome. Then, there was also a shopka, which we drove to Rome and Florence. It was incredible. In Florence, Lina Kostenko’s play «Snow in Florence» was performed in a church in the city centre. Then, the poet’s daughter was present at the play,» – Yevhen says.

Behind celebrations, the main meaning of the Christmas holidays is often forgotten, the director claims. That is why it is important for him to convey the mystery of Christmas. 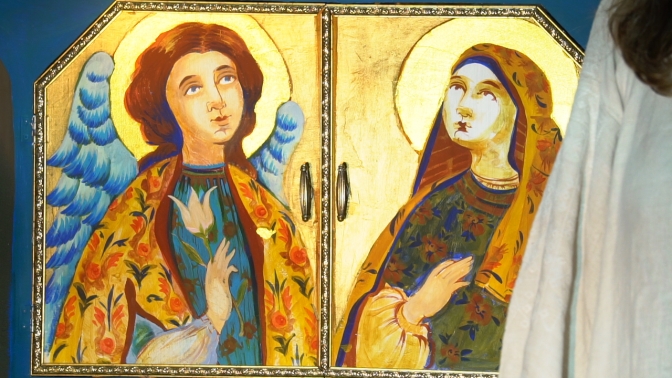 «In Ukraine, carols are very much associated with the pagan tradition of disguise, brawling. In particular, we can see such nativity scenes, where the main character is a Jew. However, we forget what this nativity scene is about. It’s unfortunate, because it turns out that we just want to have fun. But do we remember the mystery of this holiday? In fact, the nativity scene preserves three important Christian holidays: the Annunciation, because we carry the good news and we have the Virgin Mary and the Archangel Gabriel, Christmas and Easter on the door of the shopka,» – he says.

The nativity scene is over. All its participants just sit on the floor in Marynovych’s apartment to drink tea and sing carols. However, after this action, the holiday does not end. Myroslav Marynovych says he prefers to respond to such a nativity scene. He sits down at the harmonium and begins to accompany the guests, who carol «New Joy Has Come».

Photos by the author and provided by Yevhen Khudzyk