«Slaughter the elephant with a dagger.» Why territorial defence fighters were sent to the hot points

16:26 13 May 2022
Tweet
259 0
«Working at checkpoints, checking documents, fighting against small sabotage reconnaissance groups, purges of the premises – yes, we were taught that. Now, we are lying face down in the forest grass and everyone is praying to the one they believe in: God, wife, children or grandchildren,» – wrote Mykola Savelyev, a journalist and fighter for the Lviv territorial defence. 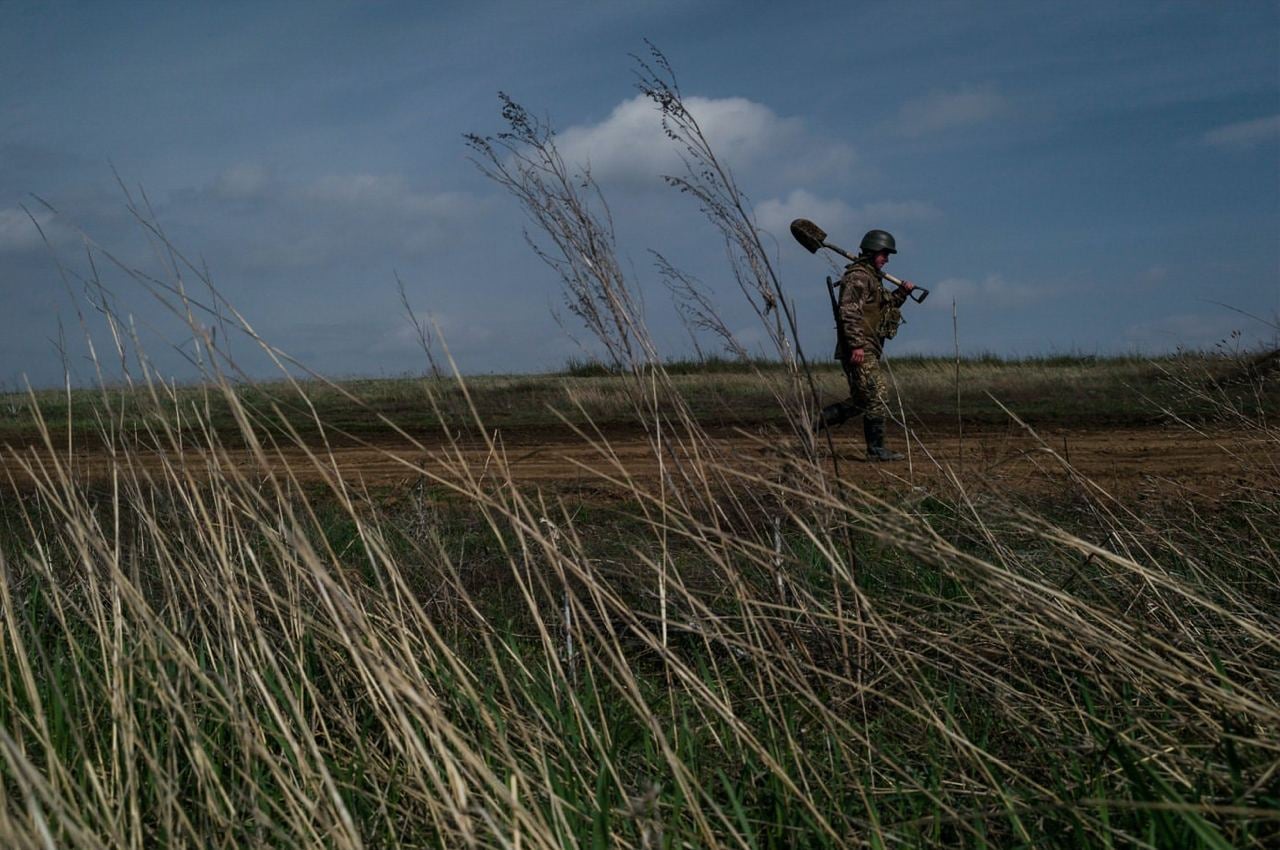 Tetiana Metyk has four children – 9, 7, 4 and 1.5 years old. The youngest one sits in her arms and snuggles up to her shoulders under the bright sun. Tetiana’s husband, a candidate of science and a college lecturer at the National Forestry University of Ukraine, joined the defence. After Easter, he was sent to fight in the east and now he gets in touch once a day to tell his wife that he is fine. Tetiana says that the man has undergone two months of military training, and asks herself what if, God forbid, something happens to him, and who will take care of her four children. The territorial defence fighters volunteered to defend their home, and now, it seems that their lives are not valued. 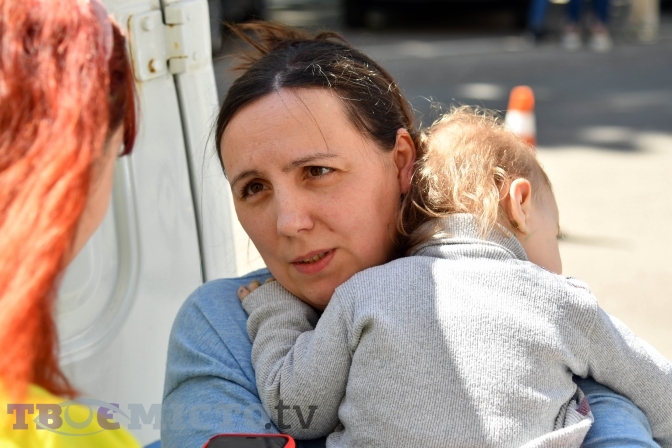 «My husband joined the terdefense. I agreed because everything had to be exercised within the region. But now, they are on the front line. We are extremely worried, we do not know how to help. He may die, and the children may be left without a father… I am not a specialist, but the infantry must be accompanied by military equipment, while they are thrown alone under tanks and artillery. Very dangerous. It seems that no one counts with their lives. Many intellectuals, famous people in Lviv, sincerely wanted to defend Ukraine, but without proper equipment and military training – it is unfair to throw them at the enemy,» – she said. 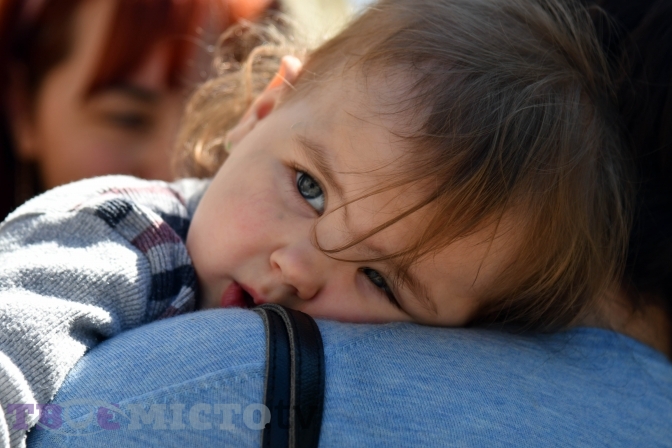 Women, sisters, mothers and girls of the terdefence fighters gathered near the Lviv Regional Military Administration (LOVA). They prepared a collective appeal to its head, Maksym Kozytskyi, who sent their men on a mission to the combat zone of Luhansk and Donetsk regions on the «zero» and «first» lines. 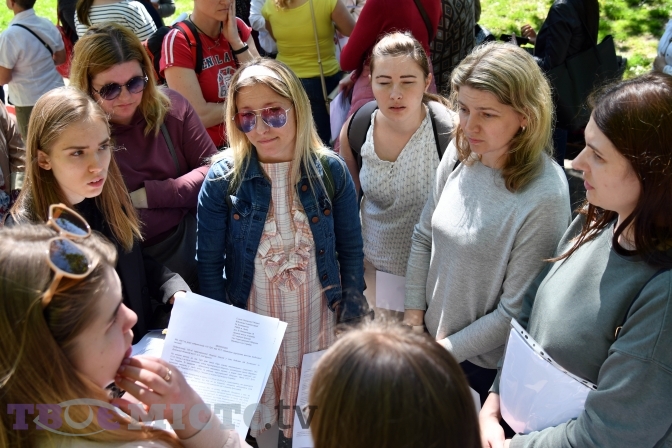 The authors of the appeal explain that when the men entered the ranks of the territorial defence forces, the law stipulated that these units were ancillary to the Armed Forces and had to perform tasks outside the areas of hostilities. However, after Easter (April 24), they were sent east to the front, although a law which allowed territorial defenders to be sent to combat areas was passed only on May 3. 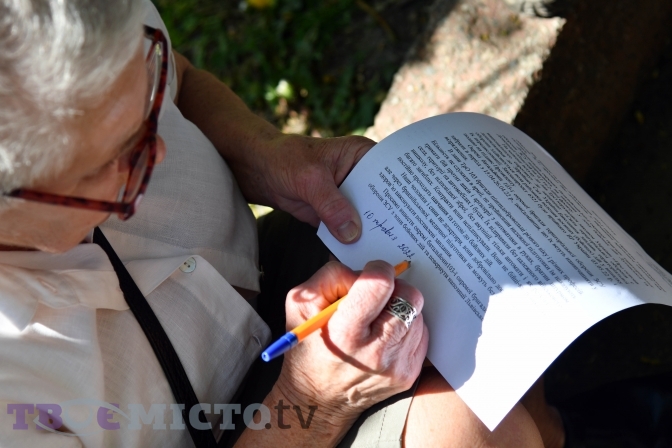 The women emphasize that volunteer fighters of all ages and professions joined the defence, but most had not served in the army. Now, they are sent without proper training to fight tanks and artillery with machine guns, and forced to confront an enemy on one bus, while Russians shoot from of all types of heavy weapons. According to their information, which is not disclosed, it is already known about the dead and wounded.

«They are not deserters – what can they be accused of if they voluntarily went to the defence? Subject to tribunal are those who give them orders to go without training and equipment against tanks with just a machine gun,» – said one of the women.

Accordingly, they appealed to LOVA, who was trusted by the territorial defence fighters, to withdraw the battalions of the 103rd Territorial Defense Brigade from the combat zone. 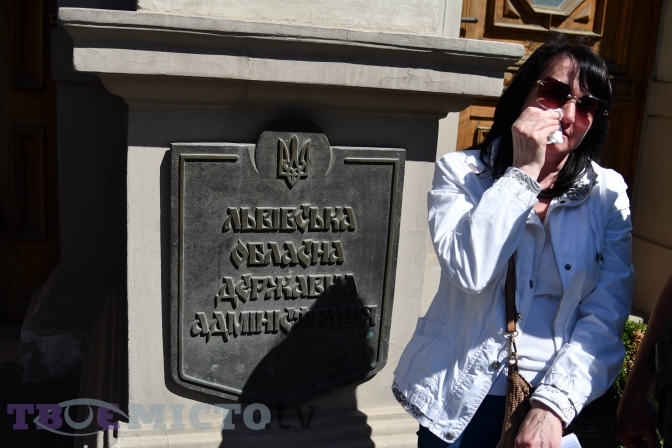 Women have tears, they are left with minor children, some have children with disabilities.

«You need to have the training, weapons, equipment. The military on first and second lines obtain it, and they were told to take the fight against artillery, mortars, and missiles. On February 24, at 7 am, my husband went to Baturynska Street, 2. Nobody stopped him then, but no one knew that they would be sent to the combat zone. Two months have passed as they stood at checkpoints having military training for 3-4 days. But my husband once came home from the checkpoint and said that they would go to 3-4 lines… He narrated that he didn’t know how they managed to get out of their position before the missile flew in… Someone has a family, children, and there are young guys who can’t even dig a trench,» – said one of the women and the author of the appeal. 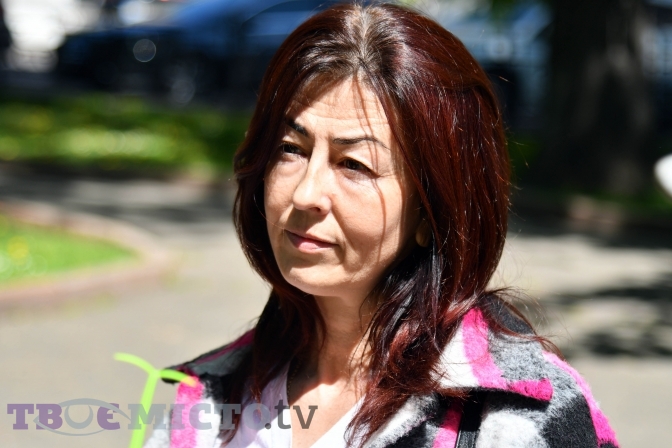 «We weren’t taught that…»

Mykola Savelyev, a fighter in the Lviv territorial defence who is now in the east, said they were under fire and described the situation during one of the battles.

«We have been lying down for four hours, waiting for a command. If evacuation or retreat – it means porridge, disturbed sleep, you may be able to wash. But if the command is «ATTACK!» – it’s almost one hundred per cent death because to defeat the APCs and IFVs, using only automatic bursts, – it’s like trying to cut an elephant with a dagger. There is no chance, but after that, you can be called a hero… In the sky hovers the Russian «Orlan», it is the «Eye of Sauron», which methodically corrects the artillery fire on everything that moves. Therefore, we are stuck in the bushes and do not move,» – he narrates.

Read also: Vice-rector, scout, and marketing specialist. Stories of those who joined the territorial defence in the Lviv region

Savelyev says that the territorial defenders have experience of purging the premises and fighting against small sabotage reconnaissance groups, but not an open war with Russian troops.

«He who says, ‘Yes, you were taught that,’ simply does not understand what he is talking about. Working at checkpoints, checking documents, fighting against small sabotage reconnaissance groups, purging the premises – that’s what we were taught. Now, we lie face down in the forest grass, and everyone prays to the one they believe in: God, wife, children or grandchildren,» – the fighter shares.

He adds that in 14 days in the east, they never saw new weapons from the West, which seem to break the course of the war.

«We are volunteers who went to the terdefence to defend their land, so there is no one to complain about. Local Donetsk terdefence fighters say they are on duty one day after two (they are at home in two days in between), and are terribly surprised that we, the terdefenders, are on the first line. We are surprised too,» – the fighter admits.

Yurii Butusov, a military expert and journalist, emphasizes that only trained people should be sent to war. He proposes to pass a law on a mandatory intensive training program for terdefenders for at least 30 days, so that trained fighters can go to war. One platoon of 30 infantrymen, who trained well for one month in the war, is more important than a battalion that went to the front after several days of training, Butusov says. He adds that Ukraine has many people ready to fight, but not enough people prepared for war.

How was the terdefence formed?

Territorial defence in the Lviv region began to form in January this year. With the beginning of the Russian invasion, thousands of volunteers joined the ranks of the terdefence with a firm decision to defend their homes and land from the enemy. Back in January, the commander of the territorial defence of the Lviv Region, Valerii Kurko, explained in an interview to Lviv Now that the terdefence forces would be subordinated to the Armed Forces and that they could theoretically be sent to the eastern regions.

Read also: How Lviv is preparing for defence: interview with chief of Lviv’s territorial defence unit

In total, two brigades were formed in the Lviv region: the 103rd, based on seven battalions in the Lviv region, and the 125th as the territorial defence of Lviv, consisting of five battallions (a separate brigade was created because the city had a population of million).

In the beginning, terdefenders were involved in maintaining order, patrolling the city, and controlling checkpoints. However, according to the law, their tasks are: protection and defence of the state border, protection of government, military administration, ensuring strategic (operational) deployment, protection and defence of important facilities and communications, combating sabotage and reconnaissance forces and maintaining martial law.

After Easter, soldiers of the 103rd Brigade of the Territorial Defense Forces of the Armed Forces of Ukraine were sent east. Earlier, it became known that a 27-year-old terdefense fighter from the Lviv region, Ihor Peron, a native of the village of Starychi in the Yavoriv region, died at the front on May 5. The defender gave his life while performing a combat mission, he died due to missile fire by the Russians.

Why was the terdefence sent to the «hot spots»?

The brigade command assures that it is doing everything possible to save the soldiers’ lives. They also add that the level of material and technical support is high.

Vitalii Zahaynyi, deputy head of the Lviv Regional State Administration (LOVA), told Lviv Now that the military administration had no influence on the location of positions or the withdrawal of terdefence fighters since the unit came under the control of the Armed Forces. According to him, in LOVA, there were several meetings with women on this topic, which were attended by the leadership of the territorial defence, they respond to all comments and must convey information to the military authorities.

Asked whether it’s possible to divert units to 3-4 lines, Vitalii Zahaynyi explains that such redeployment is possible.

«There are such appeals, we appeal to draw attention to this unit... At meetings with women, the leadership of the Territorial Defense is present, they must bring this information to the military authorities. In war, there are cases when one or another unit is taken from the place of residence, such cases occur when the command of the Armed Forces decides to transfer the military to the deep rear.

Believe me, it was not a plan to put them (terdefenders – ed.) on the front line. If we talk about shelling, we must understand that it is carried out from a distance of 10 and 20 kilometres, and this is definitely not the very front, but the shelling takes place, they also take place in the cities of the deep rear. It is clear that closer to the line of fire, the shelling is more abundant, «Grad» will be used there,» – said Vitalii Zahaynyi.

The official says LOVA is also trying to help supply the 103rd Brigade in the east.

«I understand these women whose relatives are there. But we also mustn’t lose sight of rationality… As for bulletproof vests, etc., I have already stated on your television that for me, the source of information is the brigade command.Hence, last week, we sent an extra load of bulletproof vests to our guys, and two ambulances filled with the medicine of different profiles. Therefore, the communication is maintained. It is possible to order certain needs from the commander at the expense of the regional program. For example, we now have a request for mobile stations – «Motorola» – in the position where our units are located,» – he added.