The soviet Monument of Glory finally dismantled in Lviv. What it was and how the location will change now 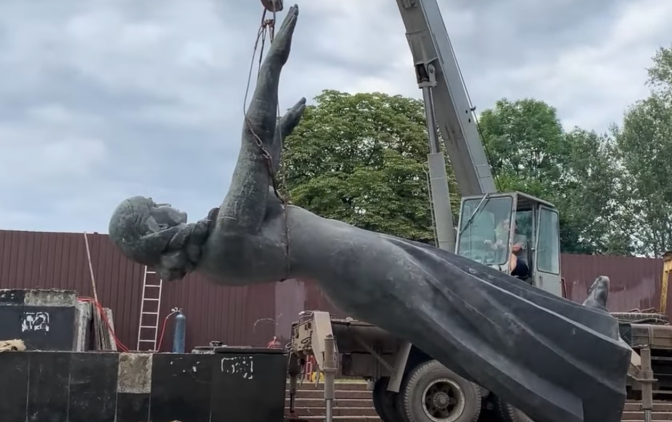 Seven years – this time was needed to get rid of the Monument to the Military Glory of the Soviet Union, a symbol of Soviet occupation not far from Lviv’s city centre. Despite the fact that the relevant conditions for it emerged in 2014, after the Revolution of Dignity and the start of Russian-Ukrainian war, this massive sculptural complex still defined the gloomy atmosphere of the place near one of the most beautiful parks in Lviv.

Nevertheless, now the task is fully completed, and the territory is waiting to obtain a new appearance and senses. Tvoemisto.tv tells the history of the monument and the plans to replace it.

On July 23, the two last parts of the Monument of Glory were removed from their location on Stryiska street near the Park of Culture – these were the monument of a Red Army soldier and the «Motherland monument», which symbolically takes an oath of allegiance to the soldier and consecrates his sword. 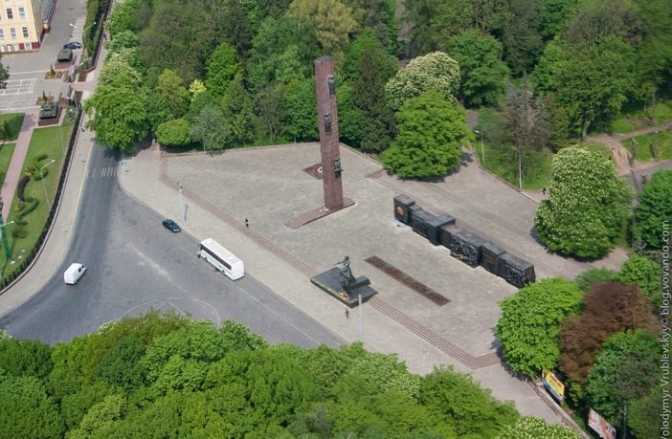 The whole monument consisted of these elements as well as a 30-meter stele (stone pillar) and five high-relief sculptures, each 4 meter high and 6 meter long. The images on the high reliefs illustrated the history of the Soviet army. It’s noteworthy that one of the episodes spoke of the «liberation of Western Ukraine» by the Soviet military forces. This Monument to the Military Glory of the Soviet Union was erected on Stryiska street in 1970. It was opened on May 9 in the Park of Culture. In 1972, the Soviet monument received the Taras Shevchenko State Prize (the highest award of Ukraine, at that time Soviet, for works of culture and arts). Historians say that currently, the monument still has artistic value – at least because it wasn’t made according to the typical designs that were «stamped» throughout the Soviet Union. 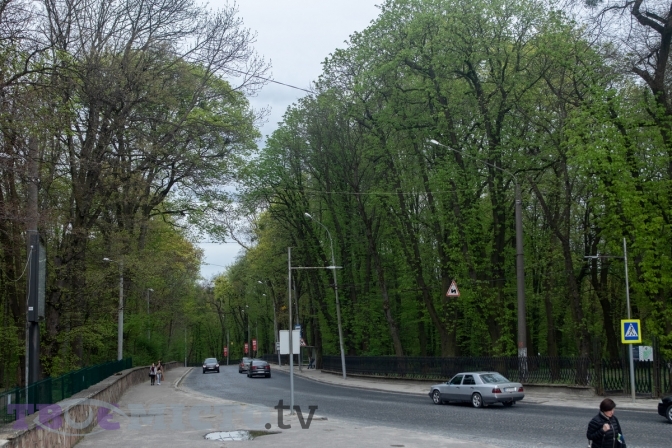 The place for the complex was chosen so that it could be clearly seen from different angles.

«Stryiska street is straight, long, and very beneficial architecturally, because the planned memorial was to be seen from afar. So they [the Soviet authorities – ed.] decided to install something on this landmark to symbolize the power of Soviet power, and even better – Soviet weapons. And what better glorifies Soviet weapons than a military monument? « – local historian Petro Radkovets wrote earlier.

The process of dismantling was relatively slow; it began in 2018. Officially, the Lviv City Council declared it in emergency condition. In March 2019, a 30-meter stele with 5 high-relief sculptures of Soviet soldiers was demolished and moved to the museum «Territory of Terror», where other «decommunized» monuments are stored. In April this year, the process went on again, and In July, the relocation of the last high relief sculptures of the monument was completed. 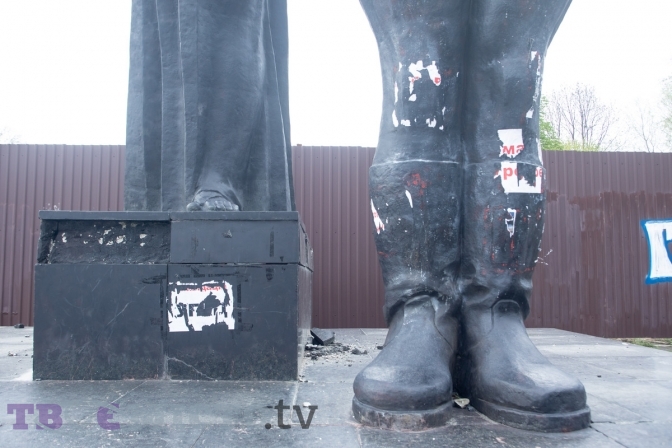 The dismantling of the Monument of Glory cost the city almost 300,000 hryvnias (about $11,000 usd). Now, the City Council is going to announce an architectural contest to determine how to change the area. It’s preparing about 260,000 hryvnias for this purpose, though the sum is still discussed. Lviv’s main architect Anton Kolomeitsev explains that as a result, the main alley of the park will also change, the space will become more inclusive, because currently it’s not convenient due to sharp height differences.

«We are preparing the tasks for an international architectural competition. It’s neither a mere piece of paper, nor a partial solution to the situation, but a connected urban node, so everything must be integrated. Currently, Stryiskyi Park and Park of Culture are torn apart, though these are components of the same green circle in Lviv», – he said. 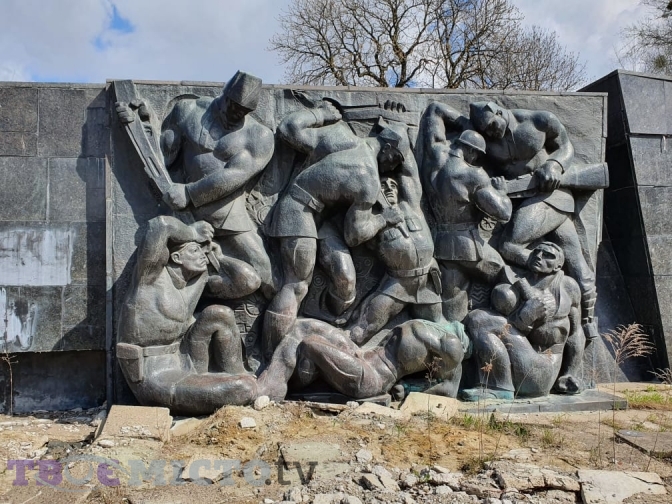 According to Kolomeitsev, there is also a plan to launch a bicycle lane on Stryiska street, connecting the Sykhiv district with the center. Underground parking is another facility to be built near the Park of Culture, where the parking lot is now located. It will be conveniently connected with public transport stops to become interceptive, so that people will be able to leave their cars there and continue to move around the city by public transport or on foot. Potentially, a cable car between the hill and the top of Stryiska street might be constructed as well. 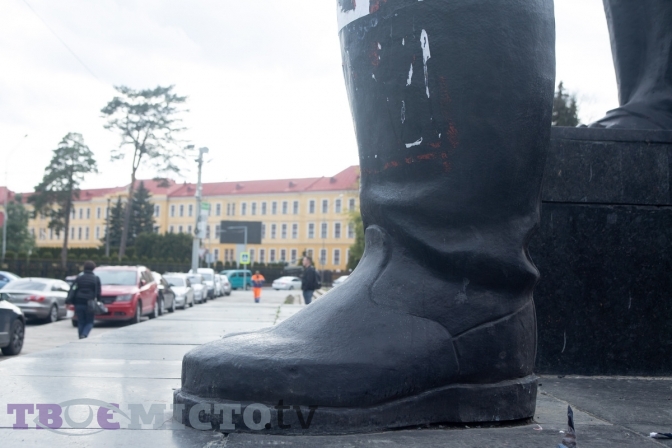 Nevertheless, the space will have a monumental significance, the architect emphasizes. It will inspire people to think about today’s heroes.

The territory of the Land Forces Academy will become more open, as the city plans to shift the fence and install a flagpole. 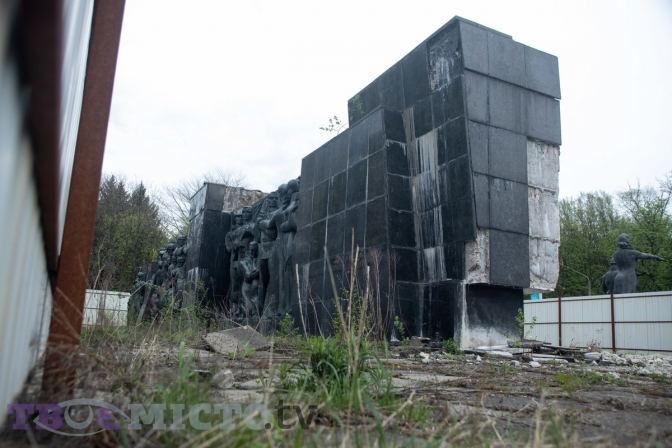 «Not a single flagpole will be installed – a public space will be arranged there to complement the area. The space will be landscaped, lit, with outdoor furniture. The size of the flagpole will relate to the scale of the entire area. All of this will need to be combined», – said the official.

Earlier, it was announced that instead of the Monument of Military Glory of the Soviet Armed Forces, a memorial to the Ukrainian soldier would be erected. The whole space will become a memorial, though the construction of a museum or other buildings is not planned.