They are attacking our nerves, not our land. Zelenskyi about a potential Russian invasion

14:22 21 January 2022
Tweet
329 0
Ukrainian President assures that it’s necessary to calm down and not run for buckwheat and matches, because the threat of war did not appear yesterday. 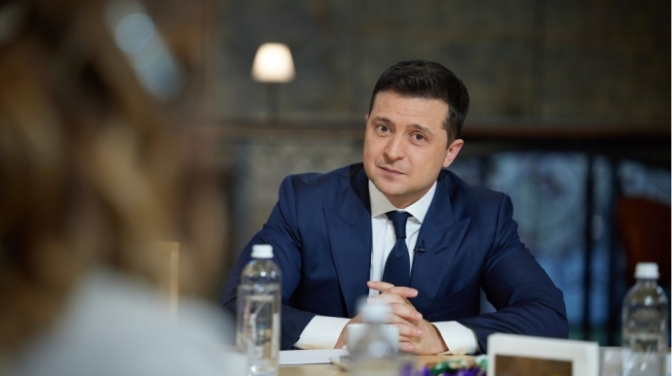 President of Ukraine Volodymyr Zelenskyi urged citizens not to panic because of a possible full-scale Russian invasion and concentration of thousands of its troops on the border with our state. He calls this situation a means of hostile pressure on Ukraine to weaken it and force it to make concessions. Zelenskyi stated this in a video message.

Read also: «Time to check bomb shelters and evacuation plans from homes.» Expert on the threat from Russia

«And what, exactly, is the news? Hasn’t this been a reality for 8 years? Didn’t the invasion start in 2014? Did the threat of war appear only now? These risks of war have existed for many days, and they have not increased. There was more excitement around them. And now, they are actively attacking not our land, but your nerves, so that you have a constant feeling of anxiety, as well as emotions of investors and business conditions. To weaken Ukraine in order to force concessions, to create such a background that our «no» sounds weaker,» – the head of state said.

The only way out today is not to panic, not to run for buckwheat and matches, not to withdraw money from accounts, and not to spread fakes. According to Zelenskyi, all Ukrainians, especially the elderly, need to exhale and calm down. Ukraine is ready for war, but it is trying to resolve everything diplomatically.

«What can you do? Only one thing: keep calm, cool head, self-confidence, in your army, in our Ukraine. Don’t screw yourself up. Respond wisely to everything – not emotionally, with you head, not heart. Do not shout «everything is gone», but know that everything is under control and everything is going according to plan. Do not constantly worry about what will happen tomorrow, what will happen in the future,» – Volodymyr Zelenskyi said in his address.

According to the President, there will be peace and tranquility in Ukraine, and the country will continue to build and develop, and citizens will live a normal life. So that at the end of the year, everyone could say that «we are well done, because we were not provoked, we were calm and strong.»

We will recall that US Secretary of State Antony Blinken arrived in Ukraine because of the Russian threat. 12 January, William Burns, director of the US Central Intelligence Agency, secretly visited Kyiv, where he met with Ukrainian intelligence colleagues and Ukrainian President Volodymyr Zelensky, and in early November 2021, Burns flew to Moscow to «warn the Kremlin building up Russian troops near the Ukrainian border.»

Earlier, it became known that Russia has started exporting the families of diplomats from Lviv and Kyiv. Reducing the number of Russian embassies could be «part propaganda, part preparation for a looming conflict, or part feint, or all three scenarios at once,» The New York Times writes, citing Ukrainian and American officials.

Read in an interview with Ostap Kryvdyk, an activist and associate researcher at the UCU Analytical Center, about whether Ukraine is ready for modern provocations or whether the crisis on the Belarusian-Polish border is part of an investigation into Russia’s plan to invade Ukraine. Tvoe Misto, which produces Lviv Now, also organized a public discussion on whether Lviv and the region are ready to organise the defence in the event of a Russian offensive.