«Wherever we are, we create our modern Bethlehem,» says His Beatitude, Ukrainian Greek Catholic Chief 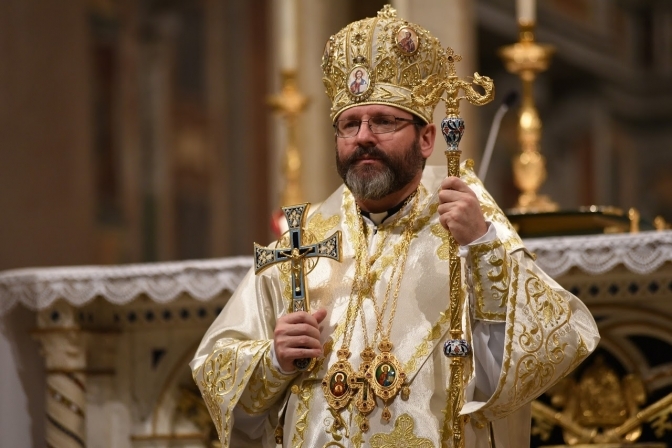 To celebrate Christmas is to join and continue the genealogy of Jesus Christ in our modern humanity, its joys and sorrows, its customs and intellectual pursuits, in our modern culture and art. This was stated by His Beatitude Sviatoslav, the Father and leader of the Ukrainian Greek Catholic Church, during a sermon on Sunday before Christmas, which most Ukrainians celebrate 7 January.

The Ukrainian Greek Catholic Church (UGCC), with 5.5 million members, especially in Ukraine, Canada, Poland, the United States, Brazil, and Australia, is eastern in calendar and style (e.g., with married priests) but is in full communion with the Pope and the Roman Catholic Church. In Lviv, it’s the majority religion, though its a minority faith in Ukraine, which is largely Othodox, either attached to the Kyiv patriarchate and Constantinople, or to Moscow.

In his sermon, the Kyiv-based leader of the UGCC noted that the Sunday of the Holy Fathers is the last before Christmas and it announces the end of the waiting time and the coming of the fullness of time.

«In the sacred texts of this Sunday, we see the two lines of humanity’s movement to the fullness of time,» – the Church leader says.

«The maturity of the relationship makes the lineage of Jesus Christ fruitful. That is why the evangelist Matthew calls its beginning the birth of Isaac, who is not just a son of Abraham, but his son according to God’s promise,» – His Beatitude Sviatoslav explains.

The fullness of the maturity of the relationship between man and God, he said, is the goal to which the Lord has directed all mankind through fruitfulness in the faith of the Old Testament Fathers.

«Interestingly, the same dynamics of attitudes toward God and His promises are revealed today in the story of Joseph the Betrothed as the immediate context of the preparation for Christmas. Righteous Joseph went through the same path of maturity and fruitfulness in the faith that we hear about today on the example of the Old Testament Fathers,» – the Father and Head of the Ukrainian Greek Catholics added.

His Beatitude Sviatoslav urged the faithful to ask themselves what it means to celebrate Christmas today.

The head of the Church also noted that the word «celebrate» has a very mundane and often even empty meaning today, it comes down to the organization of «Christmas parties».

Hence, His Beatitude Sviatoslav stressed that we have been preparing for Christmas for so long because it is we, the people, who need the fulfilment of time – the fullness of maturing time from alienation and scepticism to listening and trust, from self-centeredness to openness to God and His Word.

«This is what we need to mature in order to be united with our God and Savior in the Holy Sacrament of Confession and the Eucharist. We need full time for prayer and fasting to hear the voice not of an angel but of the Holy Spirit who will open our eyes and allow us to see the Creator present in His creation, the Source of Wisdom among ignorant shepherds, the Almighty in the helpless newborn, the Eternal God He came down from heaven to save all his people. It is we, the people, who need time to see, hear and be comforted,» – the leader of the Ukrainian Greek Catholic Church concluded.

Greek Catholicism is a Christian confession which acknowledges Catholic doctrine and is in communion with the Pope, but maintains Eastern rites and rituals, including married priests. It emerged in 1596, when a part of the Orthodox Church recognised the supremacy of the Pope. Later, the Ukrainian Greek Catholic Church (UGCC) became mostly localised in the Western Ukraine, becoming one of the markers of the national identity for the region’s population during Austrian, Polish and Soviet rule.