War-styled holidays. Lviv is undecided about the Christmas tree this winter, while Kyiv started preparations

20:35 10 November 2022
Tweet
331 0
It is known that the New Year tree will not be installed in Ivano-Frankivsk, but Kyiv is considering the opposite. 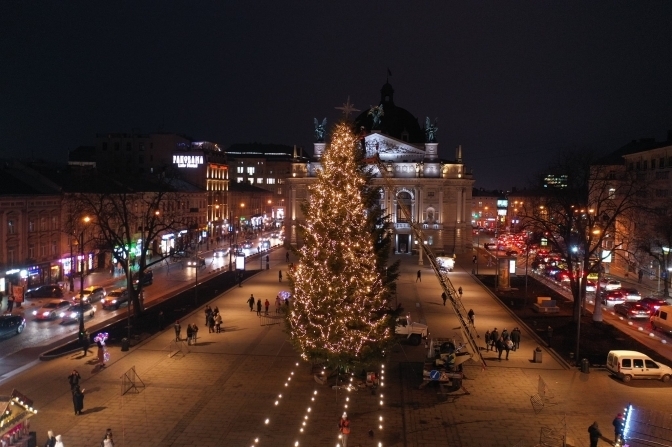 Lviv will soon decide whether to install a traditional Christmas tree in the center of the city. In response to Lviv Now, the press service of the Lviv City Council reported that there is currently no accurate information regarding this question.
At the same time, it is already known that the Christmas tree will not be installed in Ivano-Frankivsk. According to the city Mayor, Ruslan Martsinkiv, only the "Victory Tree" made of children's drawings is considered in plans. Instead, the mayor of Kyiv, Vitaliy Klychko, said that despite the war, they are considering installing a Christmas tree in the capital, though illuminations will be banned. As Suspilne (Public) media writes, the project of the main Christmas tree has already been presented at the discretion of the capital authorities. It's not yet known where exactly it will be installed, but preparations have already begun. The design of the Christmas tree was approved by the Art Council of the Kyiv City State Administration, and a decision by Mayor Vitaliy Klychko is expected by the end of the week.
Read also: «Christmas spiders» hang over the Lviv streets. What do they mean?
It should be noted that after the statement of the mayor of Kyiv regarding the installation of the Christmas tree, the city residents published a petition against it, which has already gathered enough votes to be considered by the authorities. The author of the petition notes it's inappropriate to install a Christmas tree and spend money on its purchase, installation, maintenance and dismantling under martial law.
We will remind you that every year, the Christmas tree in Lviv was solemnly opened in December, on the eve of the holidays. In addition to the Christmas tree, there was a Christmas market on the square near the Opera and Ballet Theater, where Lviv residents and guests of the city could buy various souvenirs, as well as taste goodies and hot drinks. This year, Lviv entrepreneurs and manufacturers were invited to participate in the Christmas fair, which will be held in Warsaw. Currently, it is also not known whether the annual fair in Lviv will work.
Antonina Kostyk, translated by Vitalii Holich