15:58 12 October 2021
Tweet
187 0
«We will not die in Paris»: Co-founder of the band Dead Roster, Misko was a troubadour who helped steer a nation out of the strife and trauma of Soviet times. His voice exalted the beauty of Ukraine and criticized the corrupt. 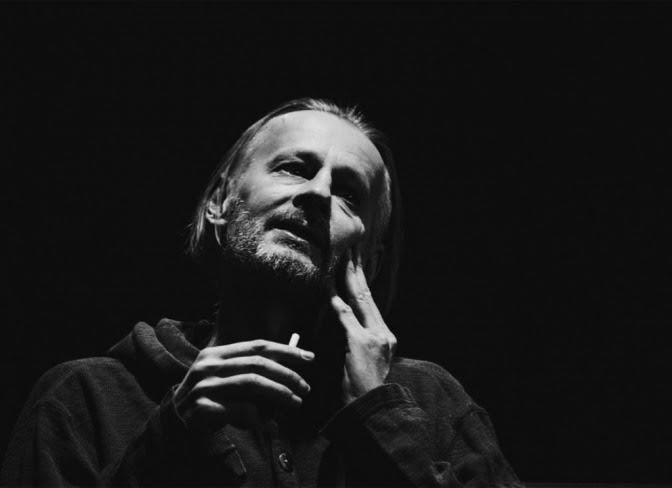 When I first saw a performance by Misko Barbara, co-founder of the band Dead Rooster (Мертвий півень), who died age 49 Monday 12 October, he reminded me of Bill Nighy’s musician character in the movie Love, Actually: He was standing at a keyboard and singing while jolting about in a quirky way, as though some muse was pulling his puppet strings from above. To me it seemed he was lost in his music rather than trying to preen for the audience.

That performance was a virtual concert in which Misko appeared via video from across the country in Kharkiv, in conjunction with Tvoe Misto («Your City») media-hub in Lviv, to lift people’s spirits during the 2020 spring lockdown. He had long been in the business of lifting spirits. Many Ukrainians I know have told me Misko was a hero during the wild, dark years of the ‘90s, when Ukraine was figuring out how to be a free country after the Soviet years of oppression.

He was co-founder of the band Dead Rooster, founded in 1989, that revolutionary year, with many songs based on the words of Ukrainian poets. He often mixed spoken word with singing, as can be seen in this tribute video. His voice exalted the beauty of Ukraine and criticized the corrupt.

When he came to visit Lviv – and gave a private show at the café Karmel above the newsroom of Tvoe Misto/Lviv Now–last spring, the staff and guests alike expressed a sort of awe. Here was someone who helped narrate their lives and get them through times of upheaval and revolution. 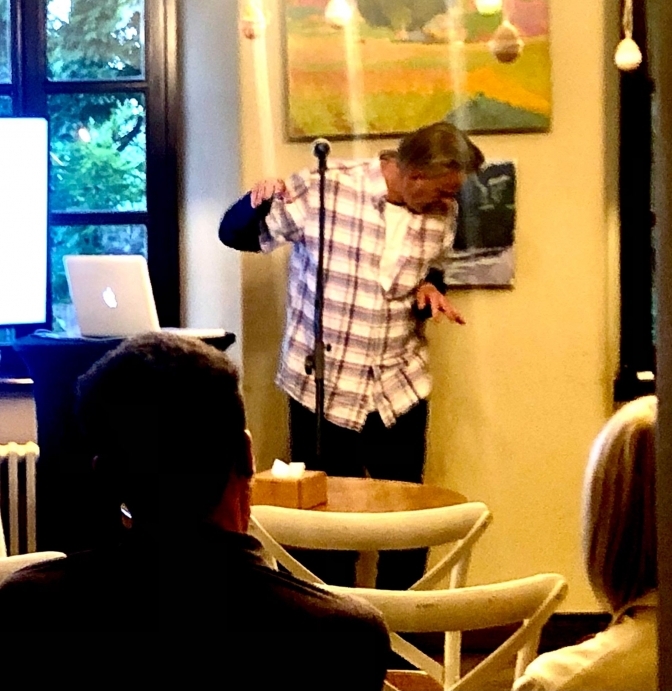 Miskо at the private show at Karmel, May 2021

Even in my short time in Ukraine, he also became a narrator of my experience, something I thanked him for in person. When the pandemic began and everyone went into a strict, by Ukrainian standards, lockdown in March, some in Lviv, with a mischievous sincerity like Misko, shared his song, «We will not die in Paris.» (or this older version here, with the spirit of Ukraine in the ‘90s): This was my first intro to Misko, and to Ukrainian humor: Indeed we will not die Paris, if we can’t even leave Ukraine!

It is a beautiful, haunting, and somehow hope-giving song. Indeed, since the news of his death broke, I have seen many post this song on Facebook. One woman told Tvoe Misto it appeared on her Spotify randomly; another said it came over the speakers at the swimming pool yesterday.

His songs had a wide-range from avant-garde protests against stupid governments (including one in which he sang as the wife of President Yanukovych who fled to Russia after the Euromaidan Revolution) and to the haunting, though still wild, tribute to the exquiistie fresh air and scenery of the Carpathians («Beautiful Karpaty«). 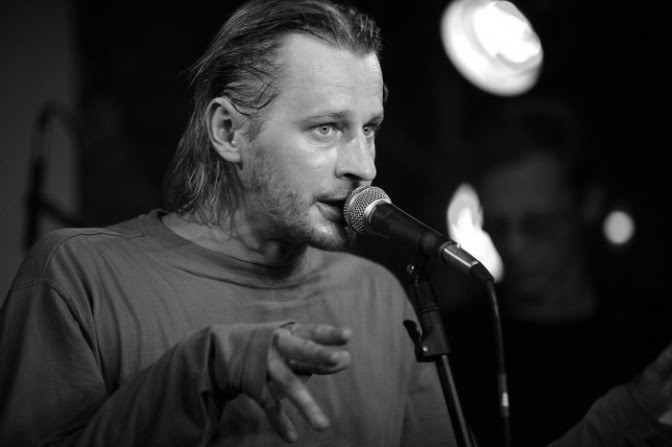 With Tvoe Misto, Misko had recently discussed big plans and visions. They recently created a trailer for a new book by a nonagenarian who emigrated from Ukraine to Philadelphia, Pennsylvania, USA, as a little kid.

In the still-to-be released short film, Misko narrated the summary of the book while an artist sketched the images. He began the narration by singing a little tune – «boy o boy, boy o boy» – full of heart and feeling, tinged with melancholy, of a young kid leaving his native land. That tune stuck in my mind for days, and as soon as I heard of Misko’s death, it began to play in my head again: «Boy-o, boy-o»: we start off with a song and keep going until what is left is a legacy.

I had been aiming to post a story today about another great late Ukrainian legend, Markiyan «Marek» Ivashchyshyn, a leader of the Student Brotherhood in the late 80s and early 90s and a man who inspired many post-Soviet Ukrainian artists and musicians. Now, these days we recall Misko Barbara, one of the troubadours who helped steer a nation out of the strife and trauma of Soviet times and through several revolutions to a new cultural self confidence, with a spirit that is at the same time calm, mischievous, and rebellious.

I can’t shake the feeling that Lviv, in particular among Ukrainian cities, is quite similar to what Paris was in the 1920s: a place of energetic, rebellious, collaborative creativity, and people like Misko created the conditions for this atmosphere.

In the Ukrainian mode, people have been sharing tributes to Misko Barbara and all of them end with these words: «Card to support Svetlana Oleshko’s wife: 5168 7422 1952 9124,» for those with Ukrainian accounts that allow for money-sharing.

You can find some of Dead Rooster’s music on Spotify. In particular I like this one which evokes traditional songs and poetry of Ukrainian Galicia and the Carpathian region of the Hutsul people.