11:10 30 November 2021
Tweet
690 0
«Just like the way a child shows emotion when it sees a picture of Disneyland, I reacted when I first found Lviv over my internet research. I think the best part of Lviv is its beauty in imperfection,» says the owner of the art café Te Amo Lviv Coffee Shop. 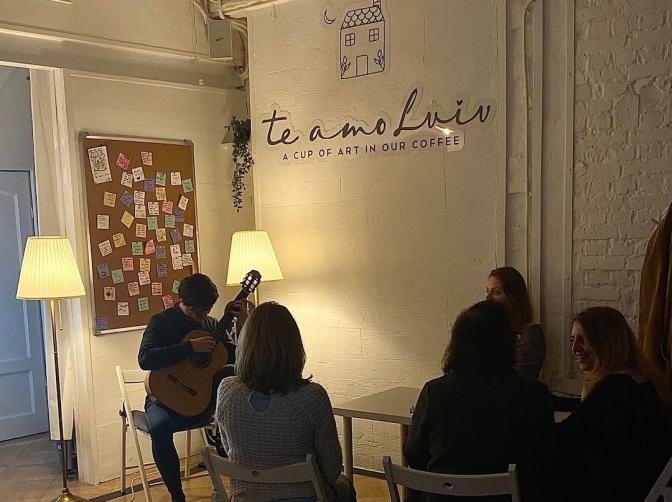 Update: This story is about the Te Amo Lviv Coffee Shop, which in autumn 2021 moved to a new location: here.

Tanmay Naskar, who goes by Dew, has seen much of the world. Besides his homeland of India, he has lived in the United States, Thailand, and China. And here in Lviv he says something special is developing akin perhaps to what happened in Paris in the 1920s: a flourishing of art and culture, spurred by café society. Inspired by the city and wanting to contribute to its culture he opened in June the Te Amo Lviv Coffee Shop, whose name is Spanish for «I love you Lviv.»

After a few months’ operation in the city centre, the café moved in the autumn to a larger spot near the Stefanyk Scientific Library. With almost nightly events such as French- and English-speaking clubs, art workshops, and music, it’s become a hub for English-speaking people in Lviv, a mix of expats as well as Ukrainians seeking international connections and improved language skills.

«Cozy» seems to be a favorite word for Dew. When posting on social media about Te Amo he often describes the place and its events as such: Come for a «cozy meet-up,» he says, to enjoy «bilingual trivia night,» a «tea party meet-up,» a «travel feaks meet-up,» or maybe a book club, a bandura music night, or an art therapy night, or how about a «breakfast with short film.»

Born in Calcutta, India, and raised in Darjeeling in the Himalayan foothills, Dew traveled much of the world until he found the sort of place he had been seeking: Lviv. After researching the western Ukrainian city, he arrived amid the pandemic in August 2020.

Soon Dew was leaving his mark. A writer-teacher-entrepreneur, he wanted to harness the artistic spirit he found in abundance here. He began to organize regular expat conversational gatherings by posting in the popular Lviv Expats and Friends Facebook group. With many cafés struggling, he made it a weekly mission to bring a group, often a dozen or more, to a different café around the city and often centered around a theme, such as the cuisine of Japan or Italy.

This turned into a new Facebook group – Lviv Kavarna Friends, with some 1,200 followers – and then into Te Amo Lviv Coffee Shop, «inspired by the slow pace of Lviv itself,» with he says, a bit of Icelandic inspiration in «its atmosphere and events.» 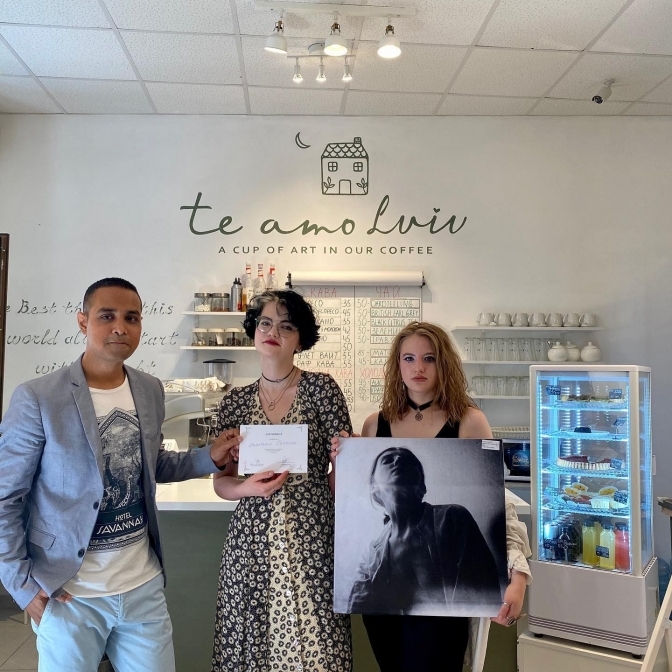 An artist exhibit unveiling event at Te Amo. Dew is on the left

Within this space, Te Amo plans to feature a new artist every month, with a kick-off meet-and-greet event and unveiling of their displays.

It seems many international folks, whom Dew estimates constitute 40 percent of his clientele, have found a coziness at Te Amo.

A Portuguese guest, in Lviv for an internship, «became so attached to our café,» Dew says, «that she visited almost everyday during her stay and bought a cup of ours, as she wanted to take a part of us while she is back at home.

«And a Moroccan living in Lviv with his wife has visited the café quite often,» Dew says. «The artistic minimalist atmosphere of our café touched him so much that he made many challenging decisions after being in the café. He felt so grateful to be part of the beginning of our café, that he gave his personal guitar as a gift to the café which is just an incredible story.»

Lviv has a long tradition of coffeehouses as places of conversation and intellectual exchange. Famed mathematicians gathered in the 1930s and ‘40s at the Scottish Café (now the Atlas Hotel, still with a café) to solve problems. In the Soviet years, dissidents spoke freely at the Armenian Café, until, reportedly, the staff put baklava on the counter to signal that the secret police were approaching. 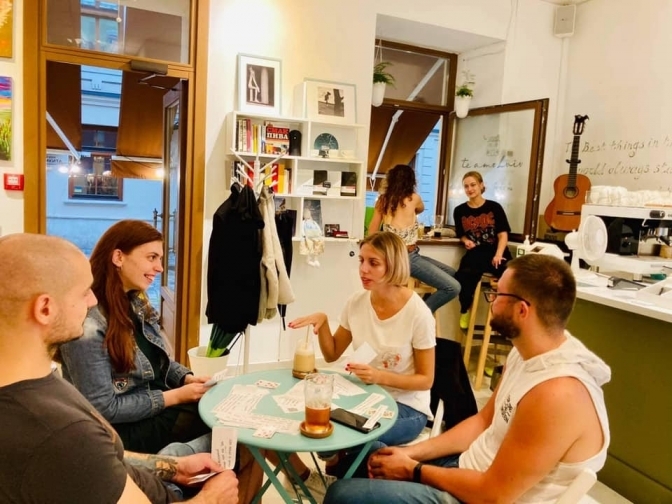 On a mission to build a new life here, Dew has sought to build upon this tradition. «To give Lviv a safe house to meet and create memories together was our dream,» he says. He describes Te Amo as «pet-and-life friendly.»

Tired of the competition and fast lives of major capitals, he said it had been his dream to live «somewhere slow and yet not small.» Seeking history and beauty he also wanted «to live in an old town of central Europe.»

«Just like the way a child shows emotion when it sees a picture of Disneyland, I reacted when I first found Lviv over my internet research,» he says. «I think the best part of Lviv is its beauty in imperfection, it makes me think of my own life.» 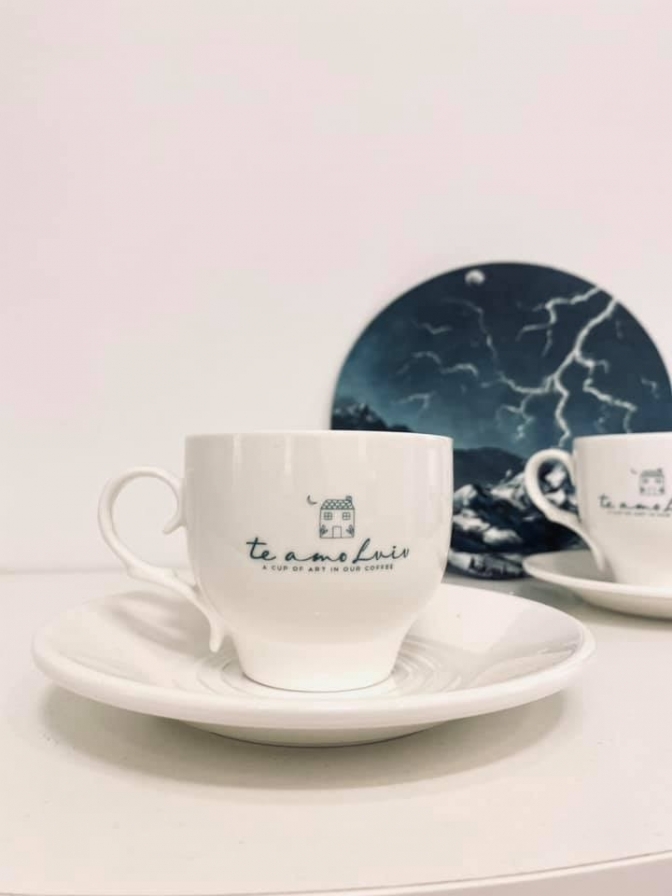 But he also has a bigger dream: «We wish to grow with more small and large branches. Te Amo Lviv might grow in other European countries such Te Amo Krakow, Te Amo Porto, etc.»